Since 1930, visitors to the Oregon Vortex have been stunned by balls rolling uphill and other seemingly gravity-defying events — but is it all an illusion? 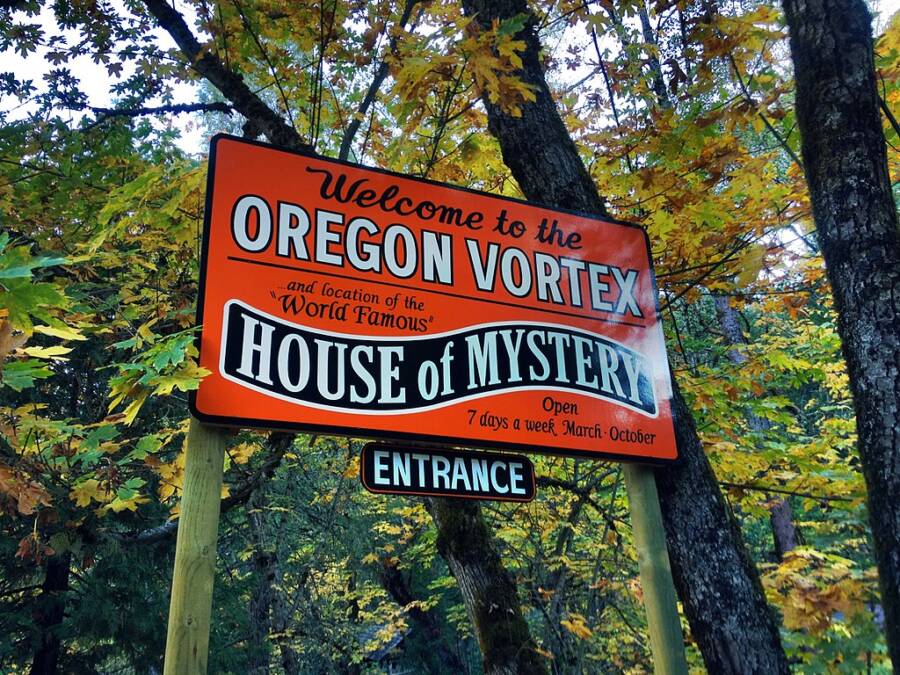 James Wellington/FlickrThe Oregon Vortex has been welcoming curious visitors since 1930.

When visiting the Pacific Northwest state of Oregon, there’s no shortage of things to see. While some destinations are known for their breathtaking beauty or must-try foods, others — like the Oregon Vortex — are better known for their oddities.

Located in the southern Oregon town of Gold Hill, the Oregon Vortex and House of Mystery attract a plethora of curious onlookers every year who want to experience firsthand the strange occurrences that take place in the area.

Founded in 1930 by John Litster, the roadside attraction continues to stun visitors with its lack of adherence to the most basic rules of physics. Guests stand at an angle, balls appear to roll uphill, and gravity seems to be merely a suggestion.

Many people have put forth theories over the years about why odd things happen in the Oregon Vortex — but there are just as many who say it’s all an optical illusion.

What Is The Oregon Vortex?

The Oregon Vortex is a place where the rules of gravity and physics don’t appear to apply. Golf balls roll uphill, brooms stand on end, and visitors’ height changes from one end of the property to the other.

According to That Oregon Life, the Takelma people who are indigenous to the area called the Vortex “Forbidden Ground,” and their horses refused to enter a zone the size of half a football field.

Per Oregon Live, an investigation on an episode of SyFy channel’s Fact or Faked: Paranormal Files tested the horse theory — and their animals did indeed refuse to go directly into the area surrounding the Vortex. 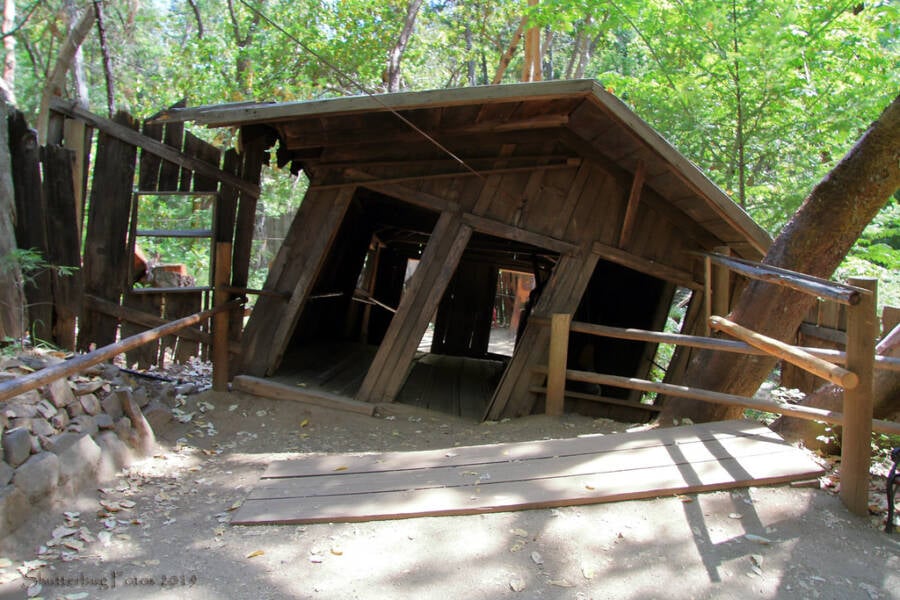 Shutterbug Fotos/FlickrThe “House of Mystery” was originally an assay office for a gold mining company at the turn of the 20th century.

However, aside from the dilapidated shack that sits on the property, there are no physical markers that would suggest that there is anything strange about the small plot of land. Litster called it the “Vortex” simply because he believed an invisible sphere surrounding the area created a “whirlpool” of unexplainable force.

Litster spent years performing thousands of experiments in the Vortex, and he compiled his research into a booklet he called “Notes and Data.” In it, he listed several theories he had about the origins of the Vortex: warped atoms, electromagnets, and even an underground super-machine that was left behind by prehistoric aliens.

But Litster wasn’t the first person to notice something odd about the land.

The Beginnings Of A Booming Paranormal Roadside Attraction

In the late 19th century, the Grey Eagle mining company built an assay office in the area of the Vortex to weigh and measure the purity of the gold that miners were digging up nearby. It could be argued that the location along Sardine Creek made the most sense for an outpost because people frequently panned for gold there, but according to the Bend Bulletin, the plot was purposely selected by savvy miners. They knew that measurements weren’t accurate within the Vortex, and they wanted to take advantage of the naive by fudging numbers in their favor.

By the early 1900s, the post had been abandoned, and the assay building began to fall into disrepair. It slid off its foundation during a landslide sometime in the 1910s and came to rest at an odd angle, making it uninhabitable as a home or office.

But in 1914, according to the Oregon Encyclopedia, a prospector named William McCollugh rediscovered the outpost and persuaded his friend John Litster to purchase the land. 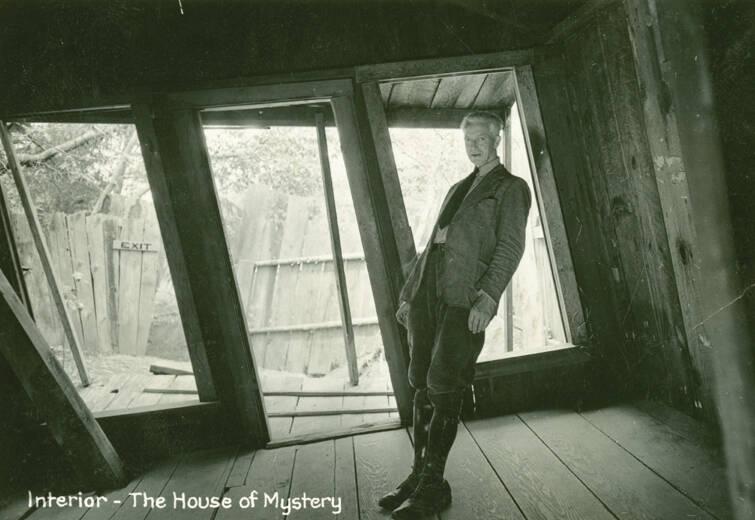 Litster was a geologist, physicist, and mining engineer born in Scotland in 1886 to a British foreign diplomat. While he opened up the Oregon Vortex and “House of Mystery” for public exploration in 1930, he continued to conduct his own research on the seemingly paranormal phenomena that took place on the land until his death in 1959. But despite decades of testing, Litster never solved the mystery of the Vortex.

The Strange Occurrences Inside The Oregon Vortex And House Of Mystery

Aside from balls rolling uphill and brooms standing on end, various other remarkable incidents occur within the Oregon Vortex. For one, guests who were walking perfectly upright before crossing the invisible boundary into the Vortex immediately begin to stand at an angle once they step over the border.

Meanwhile, the phenomenon that shocks visitors the most is the apparent height change that takes place within the Vortex’s force field. Well-informed tour guides demonstrate this occurrence to curious travelers who make the trek to the rural roadside attraction.

Countless examples of this have appeared in both photographs and videos showing two people of different heights standing side-by-side. One taller individual and one shorter individual stand a few feet apart from one another, but when the two switch positions, they also switch heights. The one who was originally taller is now either shorter or the same size as the smaller individual.

Tour guides say the height change happens because guests’ molecular structure changes within the Vortex. But researchers from Fact or Faked have their own theories. Ben Hansen, a former criminal investigator for the FBI, told Oregon Live, “I see that there’s an altitude change, and I think it’s exaggerated when you put two people together. But when you watch the video, it’s quite remarkable.” 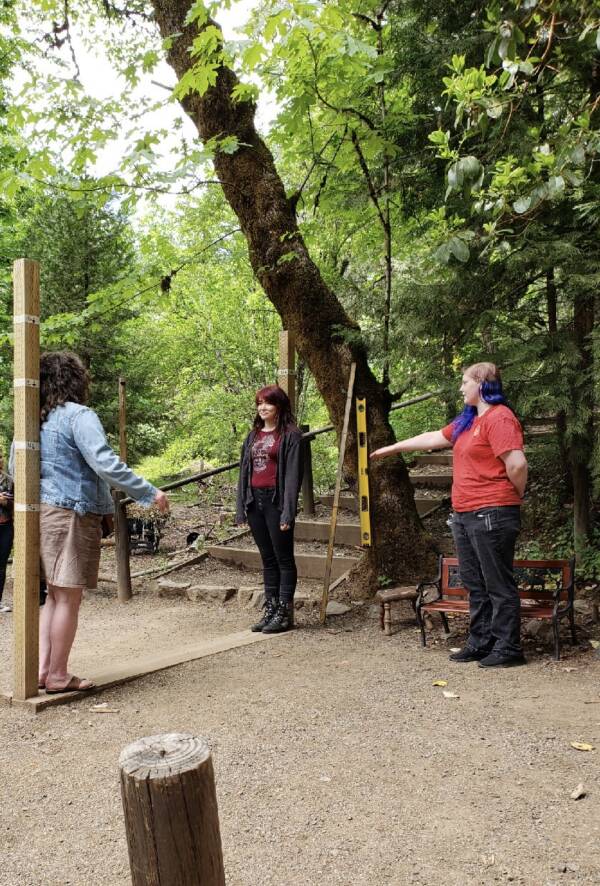 Of course, Hansen isn’t the only one who is skeptical of the physics-defying claims put forth by tour guides at the Oregon Vortex.

Over the years, plenty of dubious visitors have tried to make sense of the strange phenomena that occur at the Vortex and within the House of Mystery. In 1998, magician James Randi used photography and mathematical equations to break down the optical illusions that are utilized at the attraction.

For one, balls may appear to roll uphill because the walls and floor of the House of Mystery are tilted at different angles. The distorted background alters visitors’ perspective, but in reality the laws of gravity remain fully intact.

And despite Litster’s years of research into the Vortex, it appears that he may have been well-aware of the truth behind the illusions. According to the Oregon Encyclopedia, when a similar “Mystery Spot” opened in Santa Cruz, California in 1939, Litster sued them for copyright violations.

However, when the court pointed out that Litster insisted the Oregon Vortex was a natural phenomenon, while the California Mystery Spot made no such claim, he quickly withdrew his suit.

Of course, for every skeptic, there is someone who is convinced that there is something truly paranormal about the Vortex. Elena Cooper, whose family currently owns the attraction, told Roadside America that some visitors even believe the Vortex serves as an “energy key” that unlocks portals for Sasquatch’s intergalactic travels.

“They’re the reason I started stocking Sasquatch stuff in the gift shop,” she said. “If this is the middle of the Sasquatch Intergalactic Highway, I may as well sell stuffed versions of him.”

Regardless of the truth behind the Oregon Vortex, the attraction brings in thousands of visitors every year who want to see the curiosity for themselves. And for many of them, the mystery surrounding the vortex, whether it be scientific or paranormal, remains just that — a mystery.

After reading about the mysterious Oregon Vortex, go inside New York’s John Lawson House and the truth behind its eerie mannequins. Then, learn about the bewildering Winchester Mystery House and its stairs that lead to nowhere.