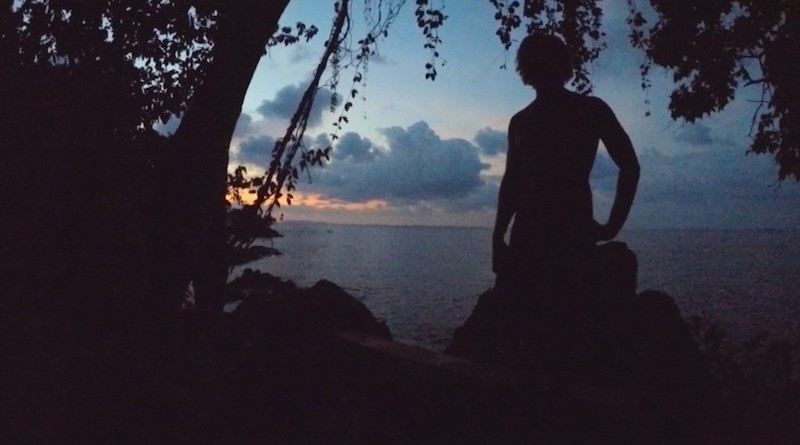 Man silhouetted against the dusk.

The Osa Peninsula juts off southwestern Costa Rica and extends into the Pacific Ocean.

Incredibly, at least half of all species living in Costa Rica can be found here. Corcovado National Park covers about a third of the peninsula and has been called “the most biologically intense place on Earth” by National Geographic. But to really understand what that means, you have to visit. 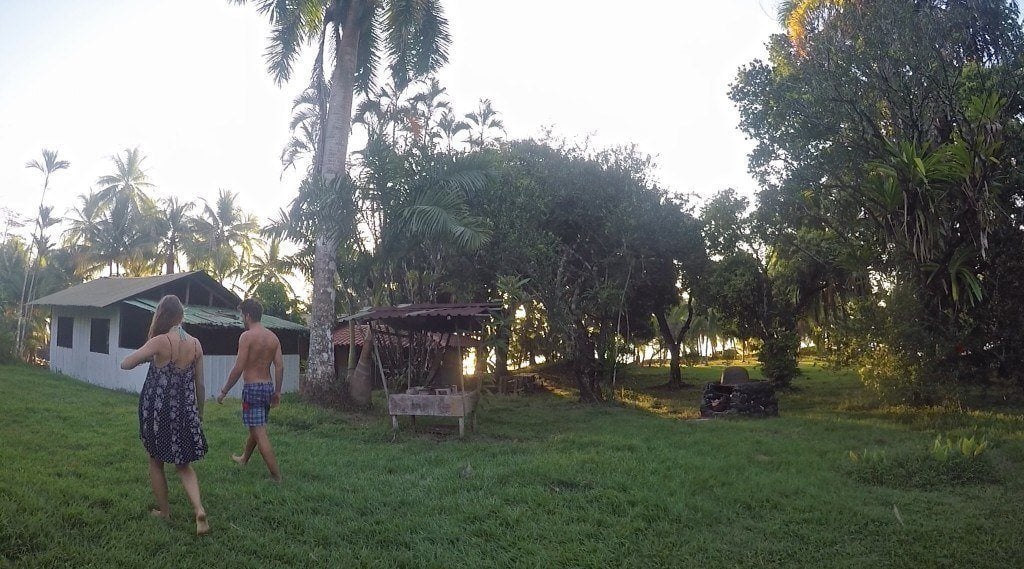 The Costa Rican government realizes this, and over the past few decades the area’s economy has begun to abandon gold mining and logging for more sustainable (and oftentimes more profitable) industries like ecotourism. Business is booming: more and more visitors travel to this region every year in the hopes of seeing rare wildlife like the endangered Baird’s tapir or the harpy eagle.

They want to see crocodiles, spectacled caiman, and bull sharks swimming in the rivers. They know they can find endangered squirrel monkey, howler monkeys, spider monkeys, and sloths up in the trees. And they hope that they’ll glimpse the elusive jaguar, even when they know few longtime residents of the region have ever spotted one.

This winter I was one of those visitors. I flew in a single-engine plane, drove across riverbeds, and hitched a ride in the back of some Ticos’ trucks to get there. It was worth the trip. We saw white-faced capuchins, scrambled up waterfalls, swam with sharks, and watched a thousand bats pour out of a sea cave at dusk. 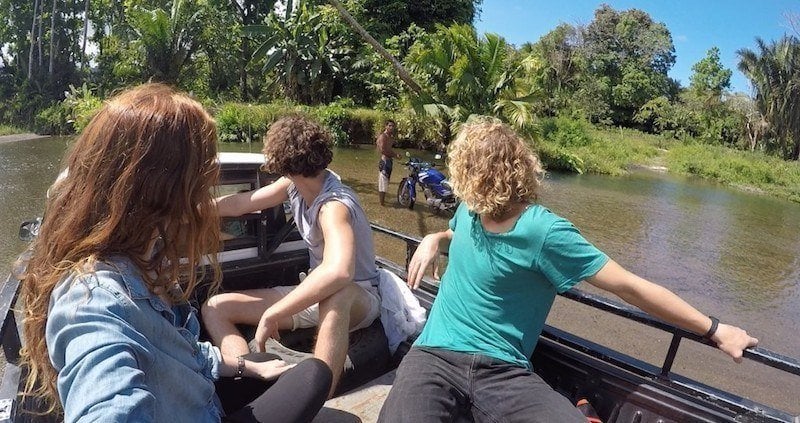 Crossing a river in the bed of a truck.

The Osa Peninsula is unlike any place I’ve been before, and probably unlike any other place that I’ll ever go. But it’s rapidly changing. English-language signs which advertise vacation rentals are becoming commonplace. In town, souvenir shops and tourism offices replace local bars. You can still feel the grit of this former frontier hanging in the air–this place was settled by tough people–but everything has been given a fresh coat of paint. Luckily, paint doesn’t last too long in the jungle. 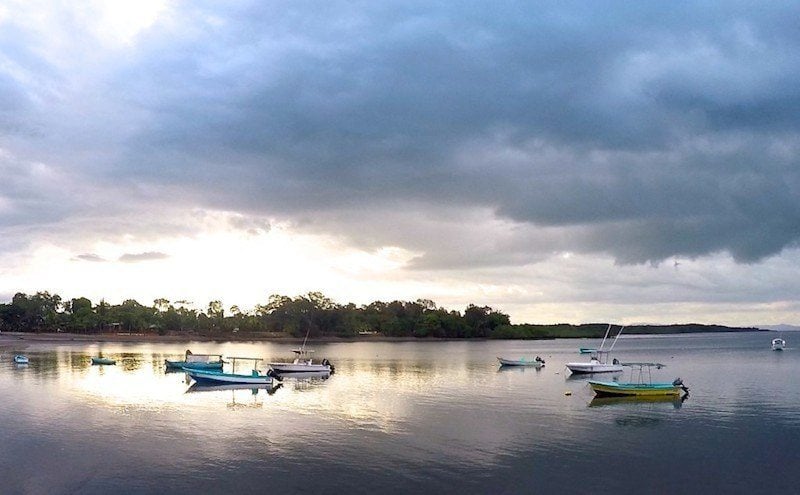 Puerto Jimenez is the largest town on the Peninsula. Source: Julia de Guzman

The biodiversity of the Osa Peninsula is breathtaking, and it’s the reason so many of us travel to the region. In fact, Costa Rica is the most visited nation in Central America. In 1970, when Costa Rica established the National Park Service and began investing in ecotourism, the country’s GDP was about $100 million.

By 2013 Costa Rica’s GDP had risen to almost $50 billion with a whopping 72 percent coming from the service industry. It received 2.42 million foreign visitors that year, and besides our open-mouthed gaping and poor grasp of the Spanish language we bring something with us: money. Each visitor spends an average of $1,000 throughout his/her stay. 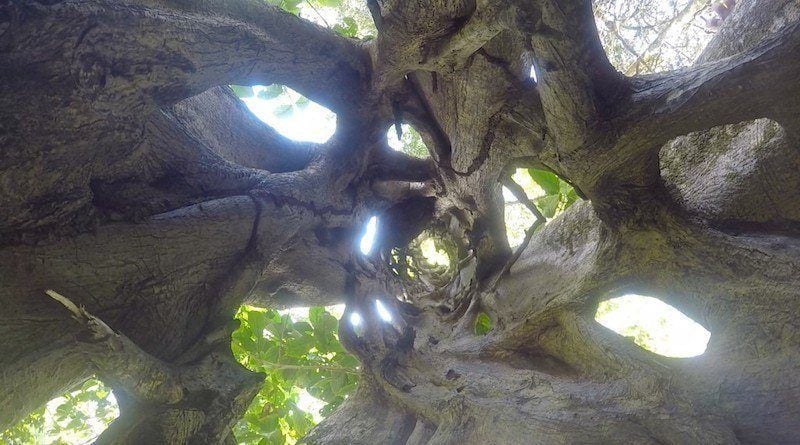 And while this influx of foreign money has adverse affects (cost of living rises while wages remain stagnant), good does come from it, too. Ecotourism gives previously impoverished areas a steady stream of capital, which provides the government and its constituents with an incentive to protect land and wildlife.

According to a survey conducted during the peak travel season of 1986 by the ICT (Costa Rican Institute of Tourism), 75 percent of tourists interviewed claimed to have come to Costa Rica because of its natural beauty. A lush, thriving ecosystem is now a valuable commodity. Which sounds like a good thing, right? 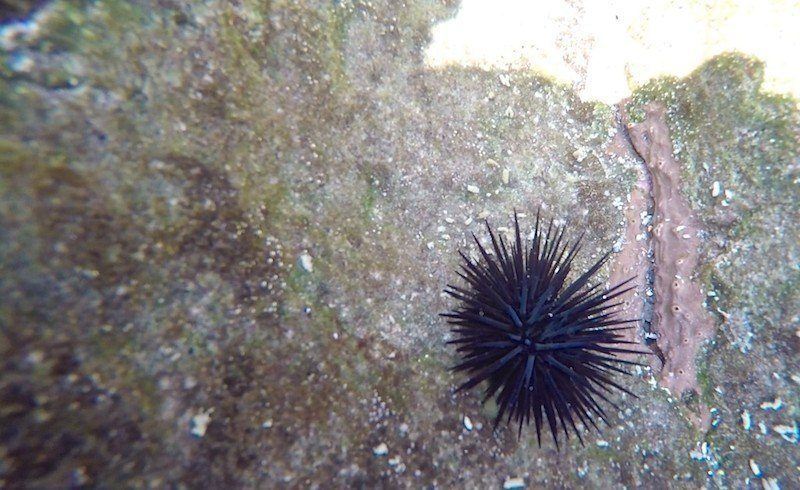 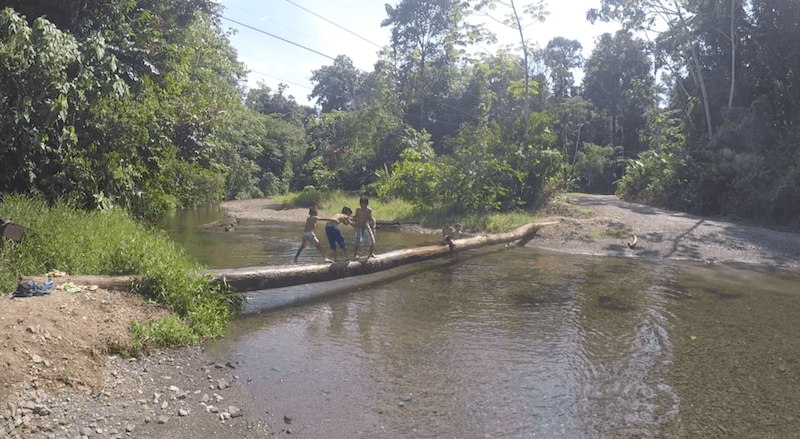 The answer is not a simple “yes” or “no”. Land is being protected, which is good, but the quality of that land is undoubtedly diminished by human visitors. When we step into the jungle, we’re disrupting the habits of the very wildlife we’re attempting to see, and whose livelihoods our money is theoretically protecting. Additionally, Costa Rica has no laws in place to regulate ecotourism, which means anyone can claim to run an ecotourism outfit regardless of experience or intentions. 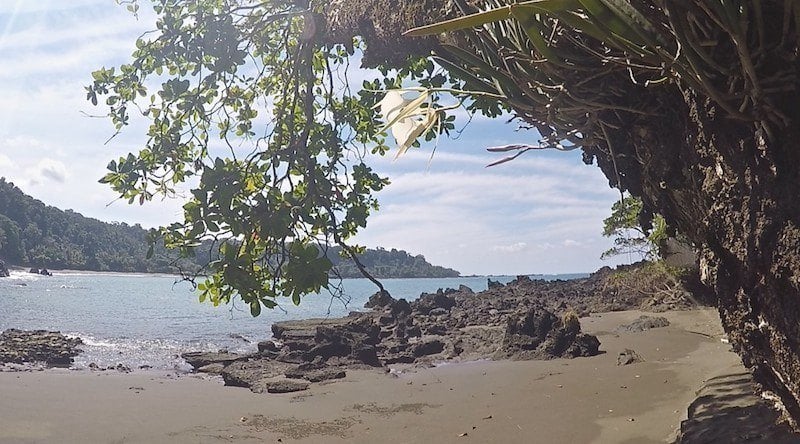 Orchids grow on a tree near the ocean. Source: Julia de Guzman

Costa Rica isn’t the only country facing a nature-lover-induced environmental crisis: the United States is having issues of its own. Round River Conservation Studies researched the relationship of wolverine habits and the “growing popularity of winter backcountry recreation” in Wyoming’s previously unreachable public land, and found that any human activity has a negative impact on the lives of these wild animals.

The wolverines in the study moved faster and with an increased frequency on weekends when more humans were present in their habitat. That might seem like a small problem, but for apex predators every calorie counts, and this increased movement stresses an already delicate balance. Large carnivores–like wolverines, jaguars, and pumas–need huge, human-free habitats to thrive, and land untouched by humans just doesn’t exist anymore in the United States, Costa Rica, or almost anywhere else.

Not all species respond to human presence in the same way. While many apex predators flee, other animals acclimate. They become comfortable with us or even glad for our arrival because we bring food. But wild animals who rely on human handouts are in danger of becoming too domesticated. What happens when we leave for the wet season? What happens when humans entering their environment aren’t tourists but poachers? 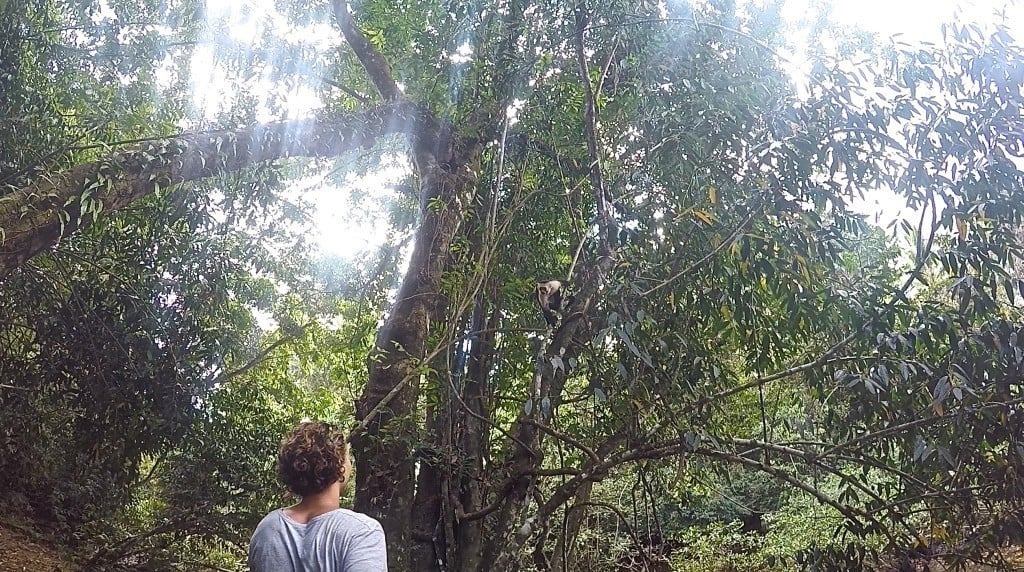 Outdoor recreation and tourism are listed as the fourth-leading reason that species are threatened or endangered (behind nonnative species, urban growth, and agriculture). This fact is almost enough to make the most enthusiastic nature lover hang up her hiking boots, but it isn’t the whole story. Outdoor recreation and tourism are also a leading reason that land is protected in the first place. Costa Rica initially began to create protected areas due to international pressure to preserve the environment, but the government has continued setting land aside–14 percent of the entire country to date–because national protected areas have also become popular tourist attractions. 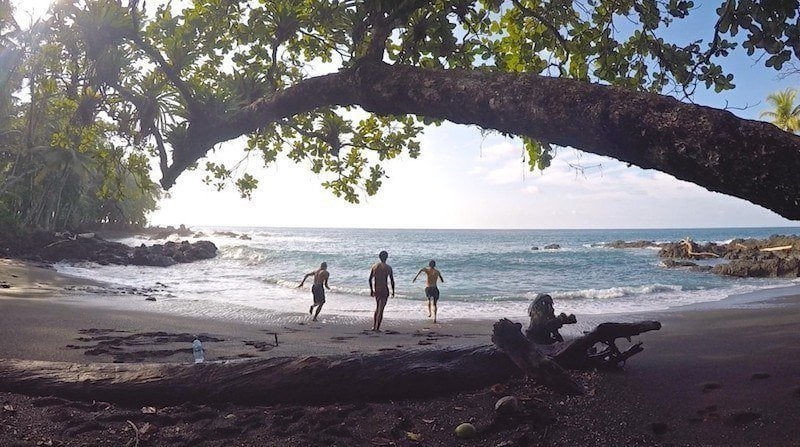 For a while, conservation and recreation didn’t oppose one another. But as human populations continue to swell and an untouched wilderness reveals itself as more of an idea than a reality, wildlife doesn’t have anywhere else to go besides publicly-owned lands. Wildlife can attract money and improve people’s lives, as we’ve seen in Costa Rica, but all development comes at a cost. At some point Costa Rica’s parks will reach their carrying capacity of human visitors. 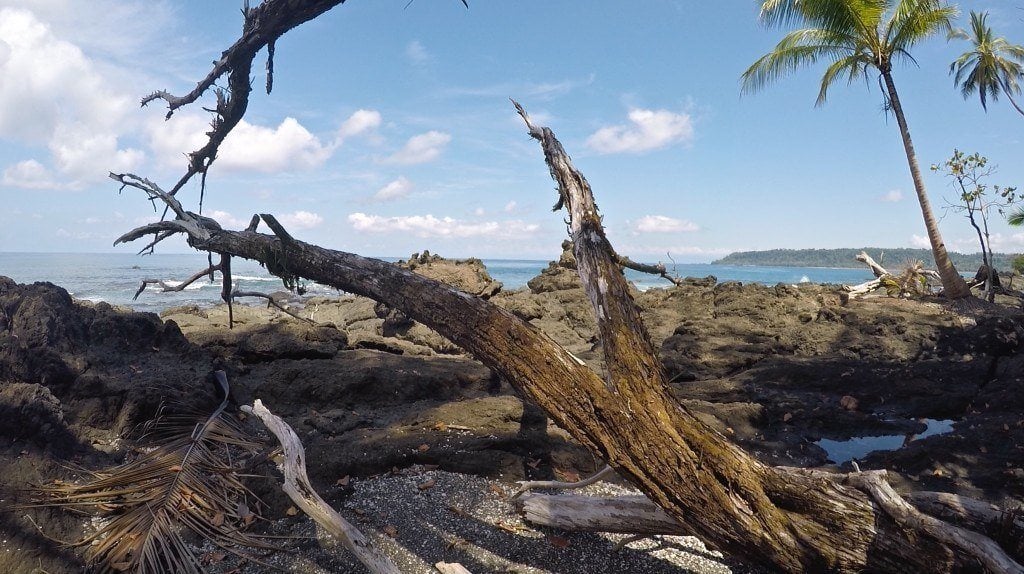 Several large parks in Canada and the United States have begun restricting human access to areas with a high wildlife density. On the Osa Peninsula, Corcovado already heavily limits camping and requires that visitors hire an official guide, both of which are beneficial to wildlife as they reduce human traffic in ecosystems. 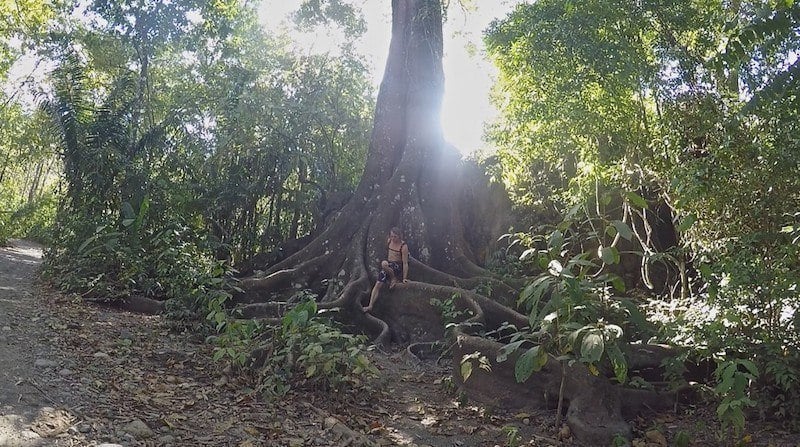 None of this is to say that ecotourism is, at its core, an evil institution. It alleviates the risk of environmental degradation and poverty, but provides no long term solutions to the problems it appears to be tackling. Ecotourism is a business that benefits from protecting the environment, but it’s still a business.

Once degraded and overused land translates to less profits, there’s no way to guarantee that these areas will still be considered worth protecting. Ecotourism is obviously preferable to the extractive industries it often replaces, but like any solution to pressing problems, it has flaws.