The Osage Reign Of Terror: How A Bigoted Conspiracy Against The Native Americans Led To The FBI’s First Case

In the 1920s, the Osage were among the wealthiest people in the world. But jealousy and bigotry would bring on a startling and barbaric conspiracy to end their success. 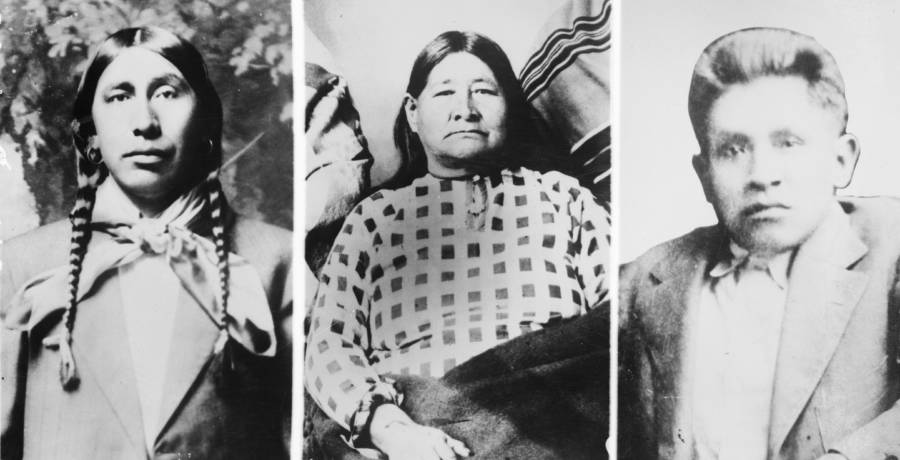 Getty / BettmannThree of the dozens of Osage tribe members who were killed in a vicious plot for oil wealth.

Since the discovery of large oil deposits beneath the land of Osage Native Americans in Oklahoma, the tribe had become some of the wealthiest people in the world. But many bigoted settlers conspired to usurp the tribe’s wealth through bureaucracy, marriage, and ultimately murder. Desperate, the Osage appealed to a new federal agency who may be able to save them — the FBI.

A Brief History Of Osage Wealth

The Osage tribe originally inhabited the area that is today Western Missouri along the Ohio River. They were a formidable people, as painter George Caitlin once described them as “at their full growth, . . . are less than six feet in stature, and very many of them six and a half, and others seven feet. They are at the same time well-proportioned in their limbs and good-looking.”

The tribe first encountered Europeans in the form of French fur traders in the late 17th century and initial relations proved beneficial to the Osage. In exchange for hunting animal pelts, they received guns and powder from the French, which in turn allowed the Osage to become the most powerful tribe in the region. 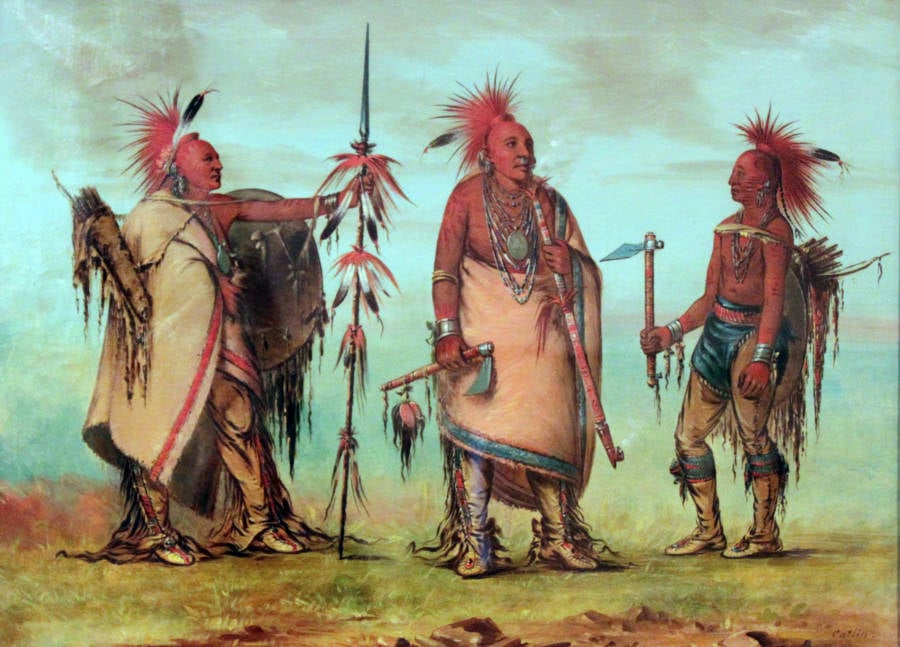 Wikimedia CommonsA depiction of the Osage by painter George Caitlin.

The fortunes of the Osage began to change with the Louisiana Purchase and the arrival of American settlers. In contrast to the French, the Americans were not interested in trading with the Osage, but rather in taking the tribal lands for themselves. Despite attempts at negotiating treaties with the United States to preserve their property rights, the Osage were pushed farther and farther west as the Americans encroached deeper into their territory. The tribe was finally settled in an area spread between present-day Kansas and Oklahoma in 1865. 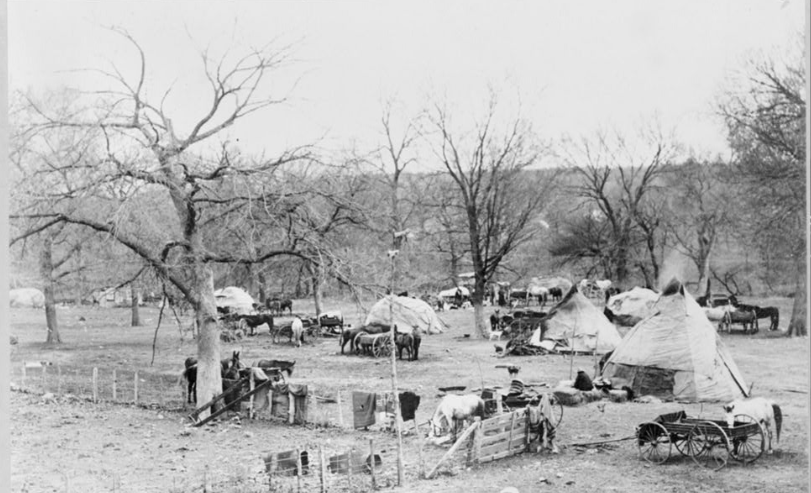 Congress pressured the Osage to sell their Kansas lands with the 1870 Treaty of Drum Creek. The tribe was relocated yet again to Oklahoma, where the Osage Nation is still today. They had initially been allotted only the least-arable land in the territory and the food supplies promised failed to materialize.

However, the rocky land onto which the Osage had been pushed held a tremendous secret: beneath the supposedly worthless soil lay “some of the largest oil deposits in the United States.”

After centuries of abuse and broken promises at the hands of the United States government, the Osage were wise enough to know they had to move quickly to make the most of their miraculous good fortune. In 1906, thanks to the clever negotiation skills of Chief Big Heart, Congress ratified the Osage Allotment Act that guaranteed mineral rights of Osage territory to tribe members only, meaning that the now-valuable reservation land could only be inherited, not bought, thus keeping the fortune within the tribe entirely. 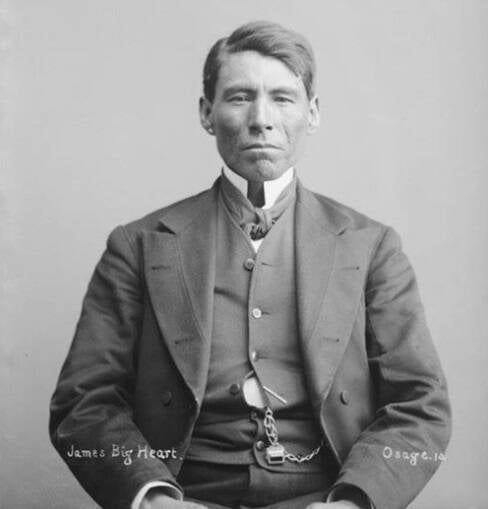 Osage County, Oklahoma Tourist Information OfficeChief Big Heart ensured that the wealth of the Osage would stay only among tribe members.

The relentless greed which had driven the white settlers had backfired on them tremendously. Now they were forced to lease land from the tribe in order to mine the black gold under the reservation property. By 1923, the Osage were earning over $30 million dollars from leases and royalties a year, an amount equating to around $400 million dollars today.

The discovery of oil on their land had turned the Osage from being on the brink of starvation to “the wealthiest people per capita in the world.”

“They lived in mansions and had chauffeured cars. They had servants, many of whom were white,” wrote David Grann, author of Killers of the Flower Moon: The Osage Murders and the Birth of the FBI.

The American public became fascinated by the Osage whom they intolerantly labeled “red millionaires.” Indeed, all of the money in the world could not erase racist stereotypes, as one newspaper wryly stated: “That lament, ‘lo the poor Indian,’ might appropriately be revised to ‘Ho, the rich redskin.” 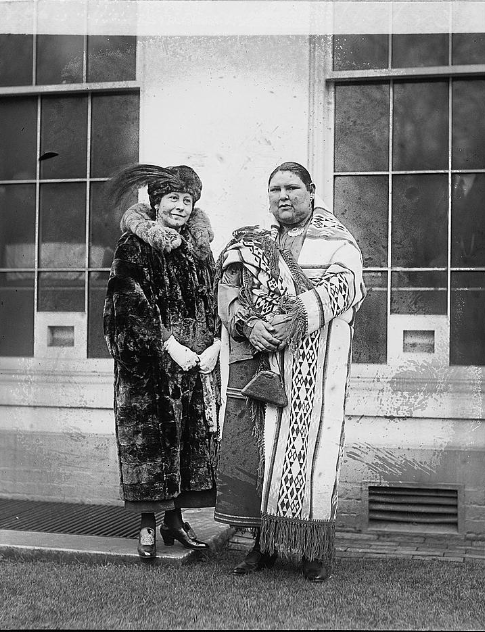 Library of CongressA pair of Osage women in 1921.

Envy for and racism against the Osage ran deeper than snarky newspaper headlines. In 1924, “under the pretense of enlightenment that the Osage needed protection,” Congress insisted that every tribe member be appointed a white guardian to manage his or her assets and supervise how they spent their oil wealth. One Osage World War I veteran said, “I fought in France for this country, and yet I am not even allowed to sign my own checks.” 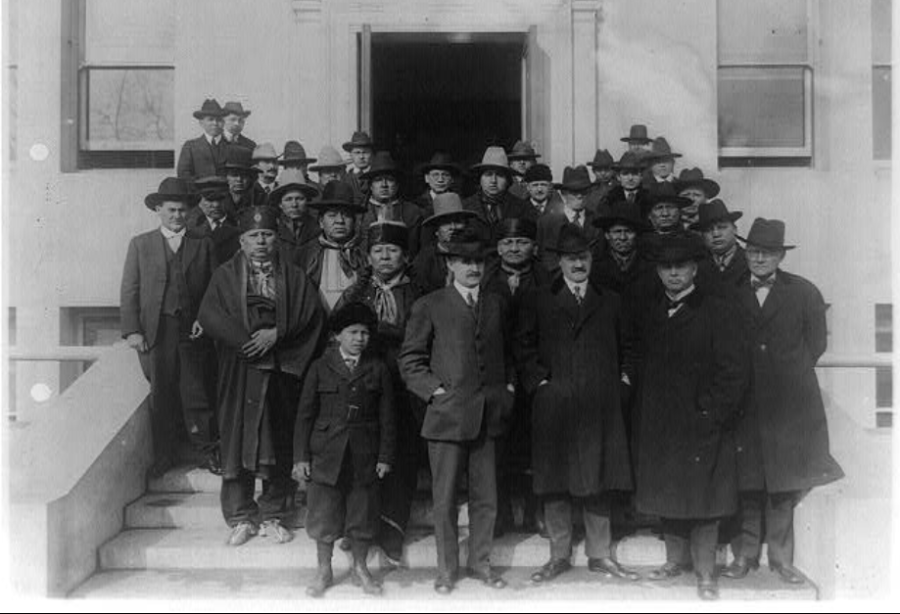 Although some of the appointed guardians were honest men who genuinely did their best for their “wards,” they were few and far between. Most of these government-appointed money managers sought only to siphon off what wealth they could for themselves.

The Murders Of The Osage

In May of 1921, the bodies of two tribe members — Anna Brown and Charles Whitehorn — were found in the woods of Osage County. They both had been shot, but the local law enforcers were largely amateurs not equipped to deal with serious crimes. The investigations went nowhere, but the killings did not stop. 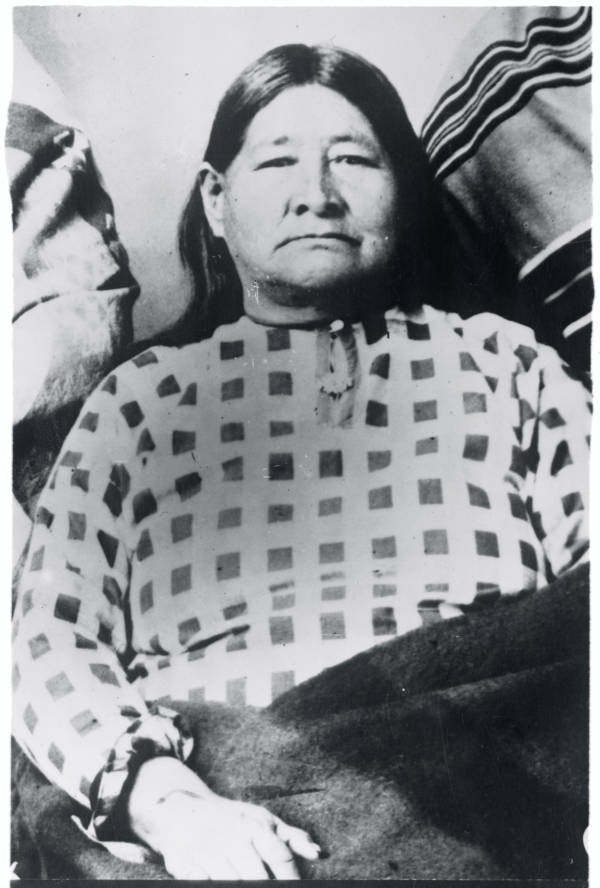 Getty / BettmannAnna Brown was one of the first victims of the Osage killing spree.

Because of the mandate that Osage wealth could travel solely through inheritance, white settlers went so far as to infiltrate Osage families through marriage and either enjoy the spoils of their spouse or murder those family members who remained between them and potential wealth. By the early 20th century, the oil rush instigated a flood of intermarriages where white men wanted a taste of the Osage wealth.

Anna’s sister, Mollie, was once such Osage who had married a white man named Ernest Burkhart. Mollie Burkhart’s mother died two months later to a suspect poisoning. In March of 1922, Mollie’s sister Rita was killed alongside her husband and white servant by a bomb planted under their house.

Henry Roan, a young Osage, was murdered via gunshot. 29-year-old William Stepson, who had been a healthy and athletic man, fell ill and died within a matter of mere hours. Although the local coroner did not have the equipment to perform a toxicology exam, poison was suspected. The theory gained more credence after two more tribe members dropped dead in similarly sketchy circumstances over the next few months.

The Osage were convinced not only that they were being systematically murdered, but that the local authorities were in on the sinister plot. The tribe decided to seek help from a higher authority and sent Barney McBride, one of the rare white oilmen who worked to help the Osage rather than to exploit them, as a representative to the capital.

But less than a day after he arrived in the capital, McBride was stabbed twenty times, a murder described by newspapers as “the most brutal in crime annals in the District.” McBride’s killing was a clear message that white friends to the Osage were not safe either, a fact emphasized when an attorney with a lead on the case was flung from a moving train.

The Department of Justice could no longer turn a blind eye to the systematic murder of the Osage, dubbed the “bloodiest chapter in American crime history.”

They finally sent in agents from the newly-created Bureau of Investigation. 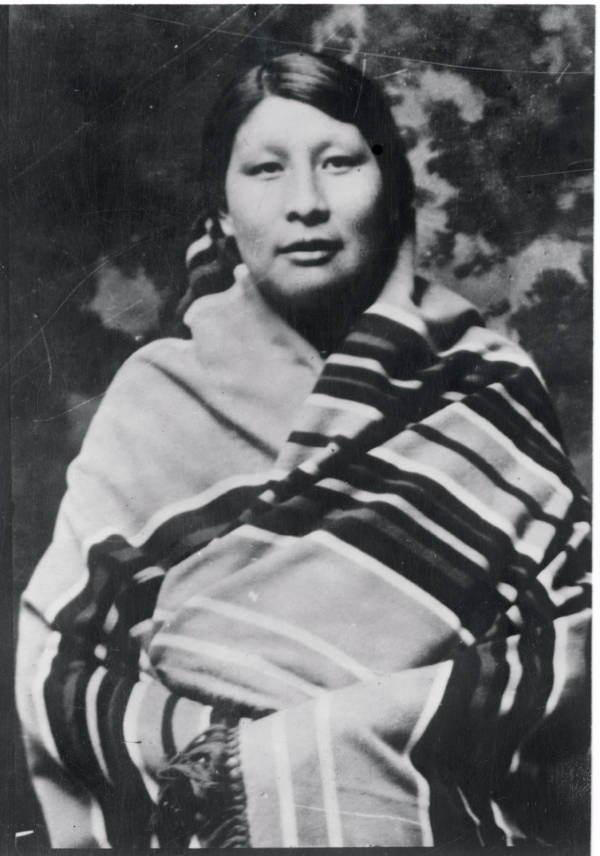 The “Osage Reign of Terror” saw the deaths of at least 24 Osage. The community illuminated their houses all night for increased security. Some families instigated their own private investigations, which often ended in the deaths of those involved.

Bureau Director J. Edgar Hoover, meanwhile, wanted to reinvent the FBI. The Bureau was new and required good publicity, he thus hoped that the newspaper frenzy surrounding the killing spree would bring in just that. He consequently sent former Texas Ranger Tom White to head the investigation.

White soon proved to be more than up to the task. His experience as a Texas lawman had hardened his nerves and he refused to be intimidated by the deaths of the previous investigators. White recruited an undercover group of cowboys to survey Osage County. What they uncovered was more malicious than they initially assumed.

They found the system of guardians was grossly corrupted. Many of the crimes were committed by the victims loved ones, especially amongst those in intermarriages. For instance, Mollie’s husband Ernest was involved in a large conspiracy of murdering the Osage headed by self-titled “King of Osage Hills” William Hale. Another of the murderers shrugged off his actions by offering the explanation “white people in Oklahoma thought no more of killing an Indian than they did in 1724.” 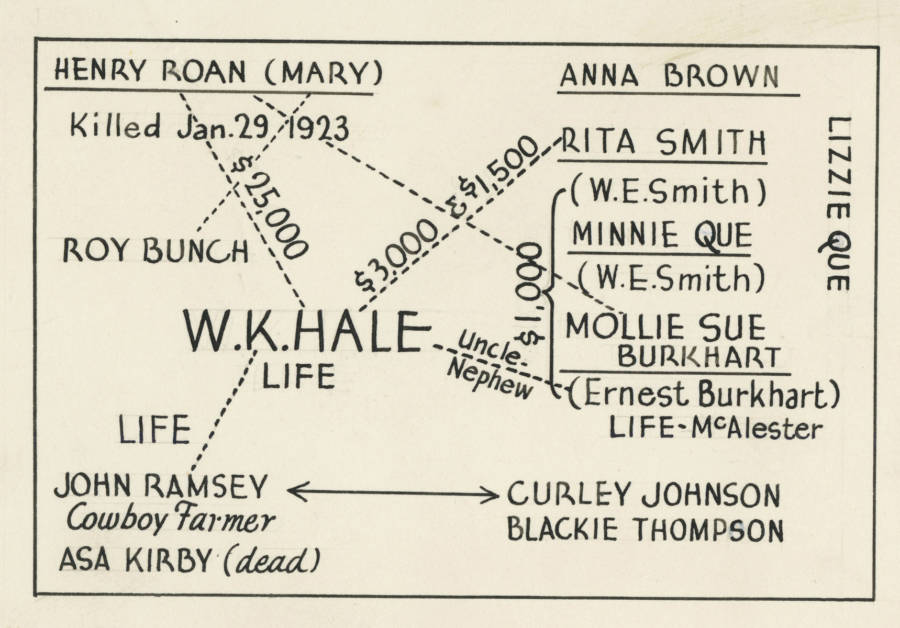 Wikimedia CommonsA trial document connecting the various murders back to the ringleader of the murder spree.

But even once brought to justice, many of the perpetrators were released by a corrupted jury. There were many who were silent, including law enforcement, reporters, and members of the community, who allowed the murders to prevail. Further, not every family received justice in the investigation, but each one did receive a bill for the FBI’s troubles.

The wealth that had saved the Osage from starvation had also damned the tribe because of the immense avarice amongst white settlers who surrounded them. As one chief remarked in 1928, “Some day this oil will go and there will be no more fat checks every few months….then I know my people will be happier.”

Next, read about Chief Big Heart’s granddaughter, Maria Tallchief, who became a world-famous ballerina. Then, check out some stunning photos of the Crow Tribe in the early 20th century.