In the 1930s, Sir Oswald Mosley led the 50,000-member British Union of Fascists and drew audiences of up to 30,000 people when speaking at nationalist and anti-Semitic rallies.

Britain’s staunch opposition to Nazi Germany has become semi-mythical in the decades following the end of World War II.

But before the images of dashing Spitfire pilots, earthy soldiers in Italy and France, and the resolute defense of the homeland became commonplace, Britain’s anti-fascist stance hung in the balance. 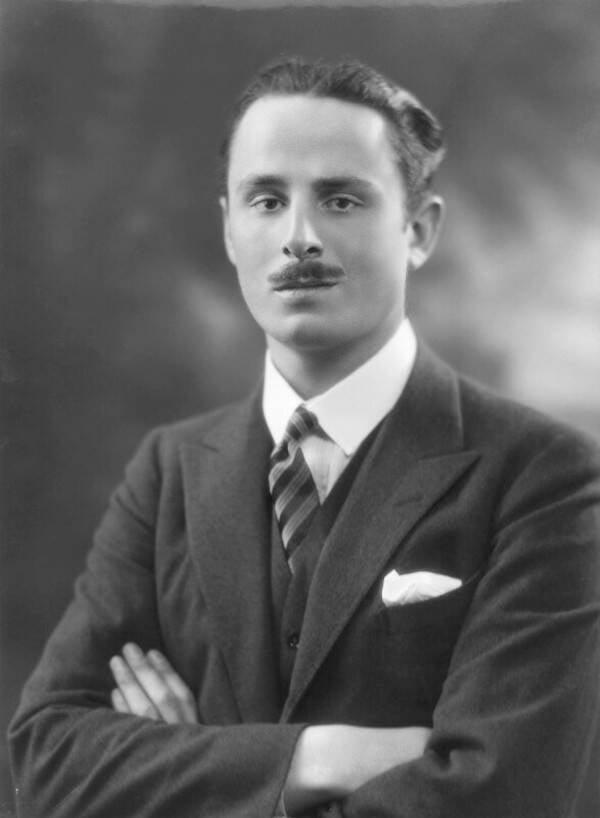 For a time, a small but outspoken nest of virulently anti-Semitic, pro-empire homegrown fascists sprang up, advocating Anglicized variations of one of the most brutal and repressive political philosophies in history.

The most notorious and prominent such group — the British Union of Fascists — owed its success to the seductive allure of its leader: the nobleman, socialite, and political celebrity Sir Oswald Mosley.

Handsome, enticing, and utterly dangerous, only vigorous resistance to his dark plans kept Britain from becoming a puppet state of the burgeoning Nazi empire. 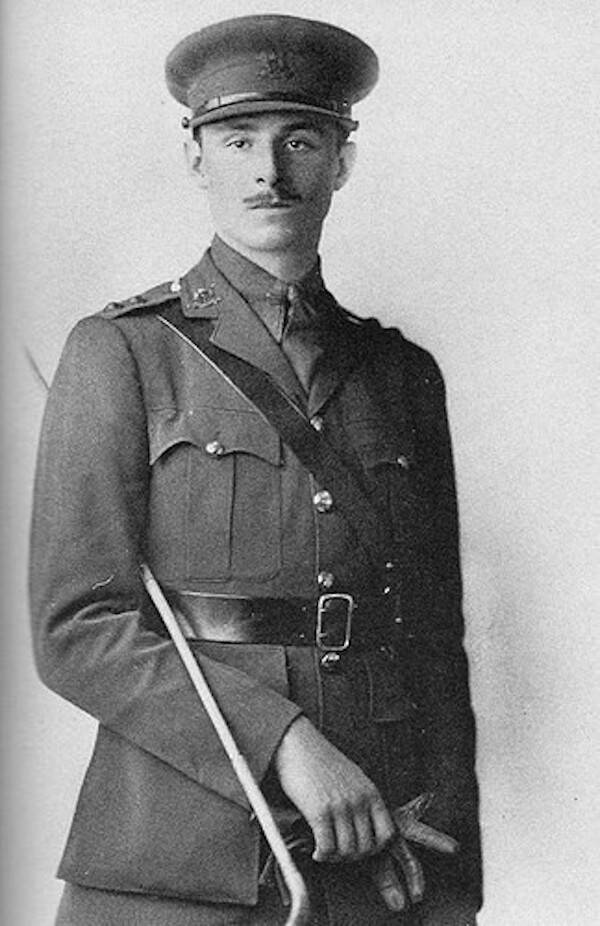 Wikimedia CommonsOswald Mosley served as an officer in the First World War, and later relied on veterans to fill the Blackshirt ranks.

Born into wealth in 1896, Oswald Mosley grew up amid Britain’s elite aristocracy and inherited the title Sir. As the son of a wealthy and ancient Anglo-Irish family, he attended exclusive schools and spent the time between terms at his grandparents’ home in the West Midlands of England.

The rise of capitalism left the Mosleys in a difficult position. On one hand, their political status as country nobles declined as finance and industry rose. On the other, the growing labor movement threatened to empower the working class of Britain in opposition to both the old and new ruling classes.

Young Oswald absorbed this dynamic by developing both a condescending distrust of workers and a writhing hatred of money and capitalism. He soon carried these feelings into adulthood.

Mosley served as a lieutenant on the Western Front in World War I before transferring to the Royal Flying Corps. A reckless bit of flying left him with a permanent limp, but the greatest effect of the war was his newfound admiration of British, and German, military might. 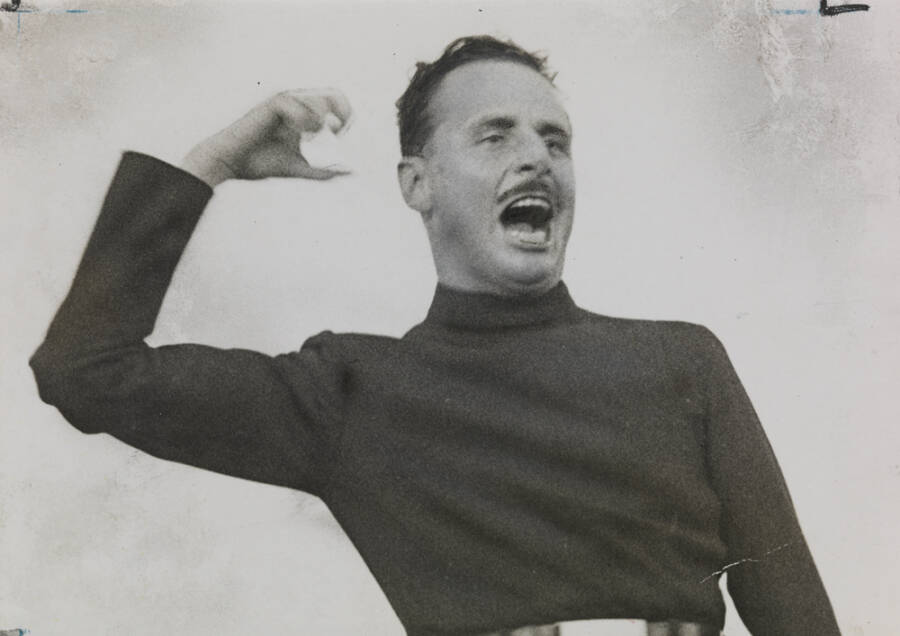 National Media Museum/Daily Herald Archive/SSPL/Getty ImagesOswald Mosley was a powerful and persuasive speaker, swaying thousands to his British Union of Fascists with Hitler-like rallies and speeches.

The election of 1918 was a ‘khaki election,’ or, one which is influenced heavily by recent wars. Returning soldiers were sympathetic to candidates who’d been to the trenches, so the young Sir Mosley was a shoo-in for Parliament as a member of the Conservative Party.

Although Oswald Mosley had almost no idea what his political beliefs were at the time, he was a passionate and compelling speaker. In 1920, he married Lady Cynthia Curzon, but he would have affairs with her younger sister and stepmother at the same time. That same year, he left the Conservatives while retaining his seat in protest of the division of Ireland.

Mosley was a member of the “Bright Young Things,” a hedonistic, privileged group of wealthy bohemians. Through them, he met Diana Mitford, with whom he soon began an affair. In 1930, growing increasingly dissatisfied with the government, he resigned from his post and lost his seat in Parliament.

But Mosley had a new ambition: the creation of a British rival to the ascendant Nazi Party.

Founding Of The British Union Of Fascists 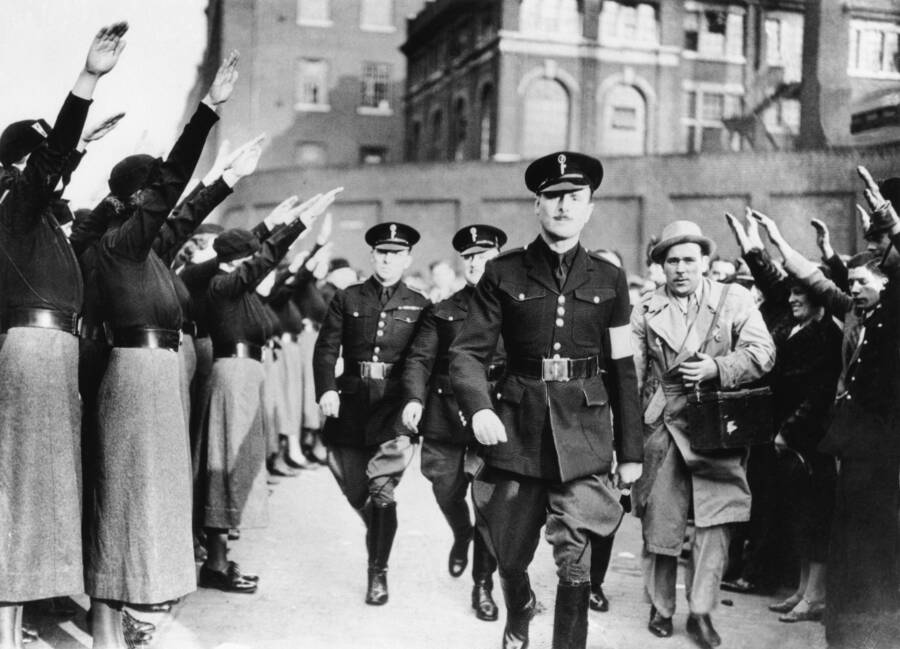 Bettmann/Contributor/Getty ImagesThe British Union Of Fascists featured the full range of fascist trappings, from coded symbols to uniforms to the infamous salute.

Oswald Mosley founded the authoritarian New Party in 1931, but after failing to win any elections, he decided that he needed a new angle — and soon turned to fascism.

The first British fascist party was founded in 1923, rising to 200,000 members before factions turned on each other over various disagreements. By 1932, they needed a savior to survive, and Oswald Mosley suggested a merger. 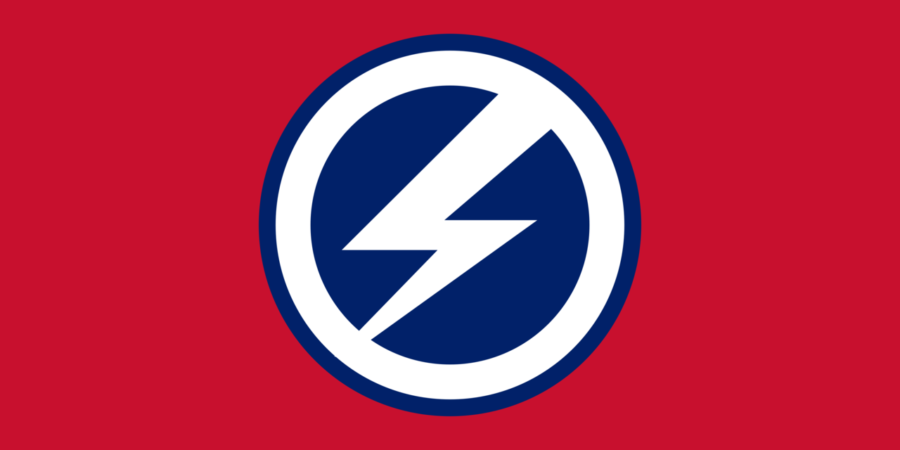 Wikimedia CommonsThe flash in the circle, the symbol of the BUF, was meant to indicate action within unity. Anti-fascists called it “the flash in the pan.”

The new British Union of Fascists was born on October 1, 1932, and held its first rally in London’s Trafalgar Square just two weeks later. Proudly anti-Semitic and racist, their beliefs were essentially copied from Mussolini. However, unlike Italian fascism, the BUF also attempted to attract Catholics and women — two groups traditionally scorned by the British ruling class.

The BUF, like the Nazi Party, began as a combination of a political movement and a paramilitary group called the Blackshirts, modeled on Hitler’s Brownshirts.

The Downfall Of The British Union Of Fascists 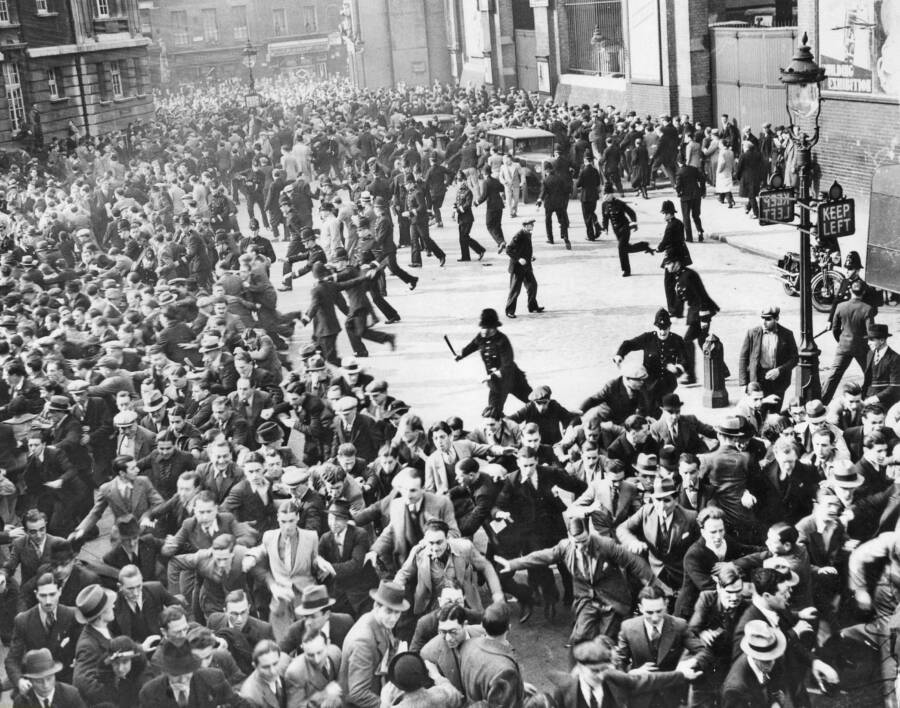 ullstein bild/ullstein bild via Getty ImagesAt the Battle of Cable Street, Oswald Mosley’s Blackshirts were thrashed by thousands of protesters and police. By 1940, his party was banned.

The appearance of the Blackshirts’ distinctive uniform, sold piece by piece as a reward for fundraising, sounded the alarm among British politicians. But 1936 would see several major events for Mosley and the BUF, starting with a tour of Mussolini’s Italy that cemented the commitment to authoritarian anti-Semitism that his party had begun to embrace. 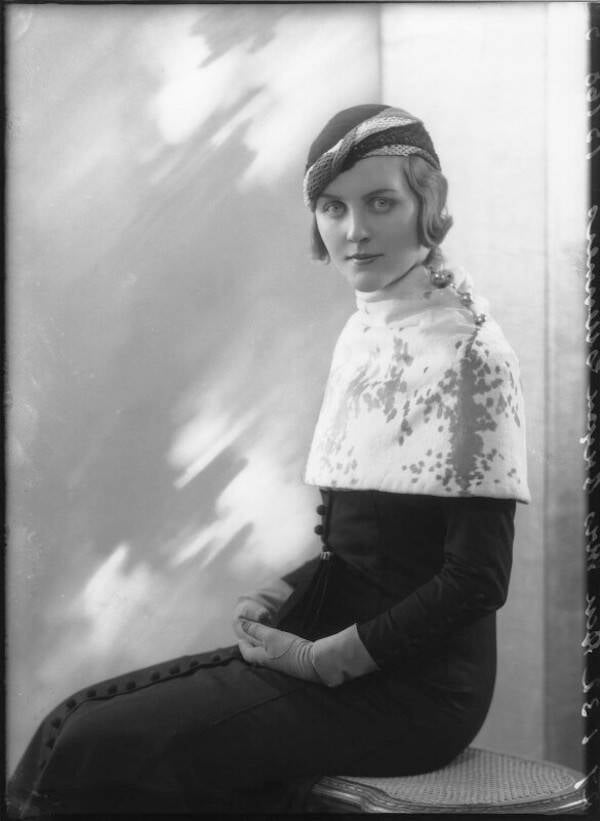 Wikimedia CommonsDiana Mitford was an unapologetic admirer of Hitler until her death in 2003. Her sister Unity was even a member of the dictator’s inner circle.

That fall, Oswald Mosley tried to organize one last march through London’s East End. But his opponents were waiting. At the Battle of Cable Street on October 4, 1936, as many as 300,000 anti-fascist activists joined forces to smash the last great Blackshirt march in Britain.

As 2,000 to 3,000 fascists marches through the streets and police scrambled to protect them, anti-fascist protesters threw sticks, rocks, and rotten vegetables at them. Women in the houses they marched past emptied chamber pots out their windows onto the policemen and fascists below. After several running battles, Mosley and police chose to stop the march to avoid violence.

The marchers headed to Hyde Park, but anti-fascist protesters remained and clashed with police. 150 protesters were arrested and some 175 people on all sides were injured.

On this day in 1936, Oswald Mosley and the British Union of Fascists were blocked from marching through the streets of…

Finally, Mosley, widowed in 1933 when his first wife died of peritonitis, married his mistress Diana Mitford at the home of Nazi propaganda minister Joseph Goebbels just two days later on October 6, 1936. Adolf Hitler attended the wedding as a guest of honor.

By then, Britain had had enough. Political uniforms and paramilitary organizations were banned by the Public Order Act of 1936 which passed in December, and many Blackshirts and BUF members defected from the party. However, Mosley himself remained rather popular through 1939, with a speech he gave in that year attracting 30,000 onlookers.

But as World War II broke out, and especially after the fall of France, public opinion turned on Oswald Mosley. 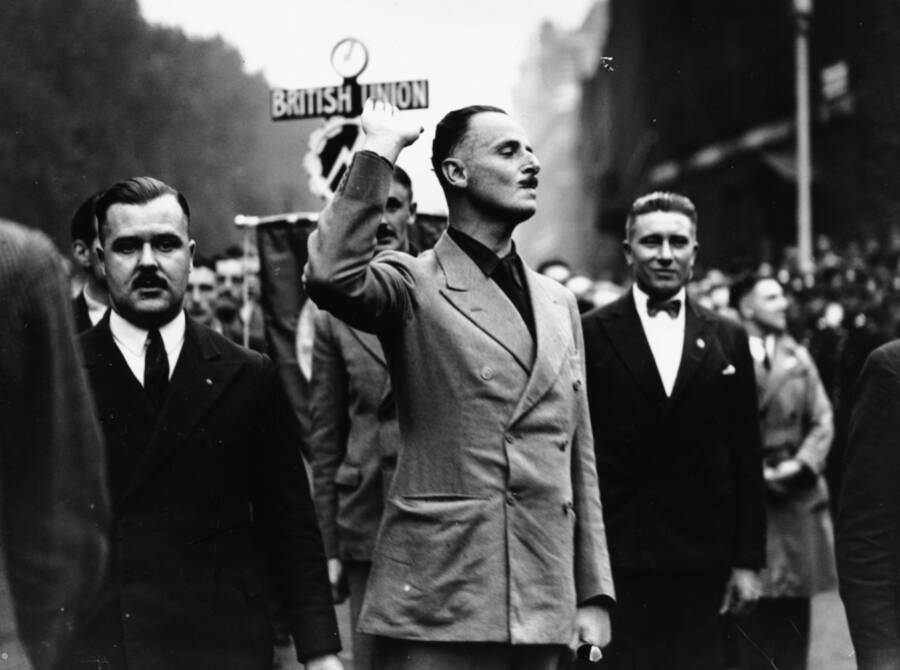 Fox Photos/Hulton Archive/Getty ImagesPublic appearances were important to Oswald Mosley and the BUF, and he capitalized on his dapper dress to attract followers.

Oswald Mosley and his wife were imprisoned as traitors in 1940. Released in humiliation in 1943, they kept a low, but unapologetically fascist-friendly, profile. Diana would later acknowledge Hitler’s cruelty, though she also <a href="http://remained an apologist for the dictator.

“[What he did] doesn’t alter the fact that he was obviously an interesting figure. No torture on Earth would get me to say anything different,” she said.

Mosley returned to politics after the war with the Union Movement, pushing for a racially exclusive union of European states. But his opponents had long memories, and groups like the 43 Group — a collection of Jewish veterans — battled Mosley’s thugs relentlessly, eventually driving them underground.

Additionally, his efforts to stoke new racial fears of Caribbean immigrants didn’t help him at the polls. Mosley left Britain for Ireland after his defeat in 1951 and eventually moved to France. The UM staggered on until 1973, inspiring generations of racists and neo-Nazis.

Oswald Mosley died in France in 1980 at 84 years old. To this day, Mosley’s fascist writings are available from far-right publishers. His charisma and reputation for elegant hatred were compelling enough that almost no changes were made to his character when he appears as a villain in the fifth season of the British crime drama Peaky Blinders.

This scene from Peaky Blinders recreates a real event from 1934 at Birmingham’s Bingley Hall, which drew as much as 8,000 attendees.

While the show’s characters are fictional, the record shows that Oswald Mosley’s disturbing magnetism was all too real. Thankfully, unlike Hitler, Mussolini, and Franco, his fascist movement was squashed by virulent dissenters before it could lead to massive harm.

After learning the disturbing truth behind Britain’s biggest fascist, read more about the resurrection of far-right extremism in Europe. Then, find out what life was like inside Mussolini’s fascist state.