The offspring of the "cocaine hippos" once owned by drug kingpin Pablo Escobar, dozens of these invasive beasts are rampaging through Colombia today. 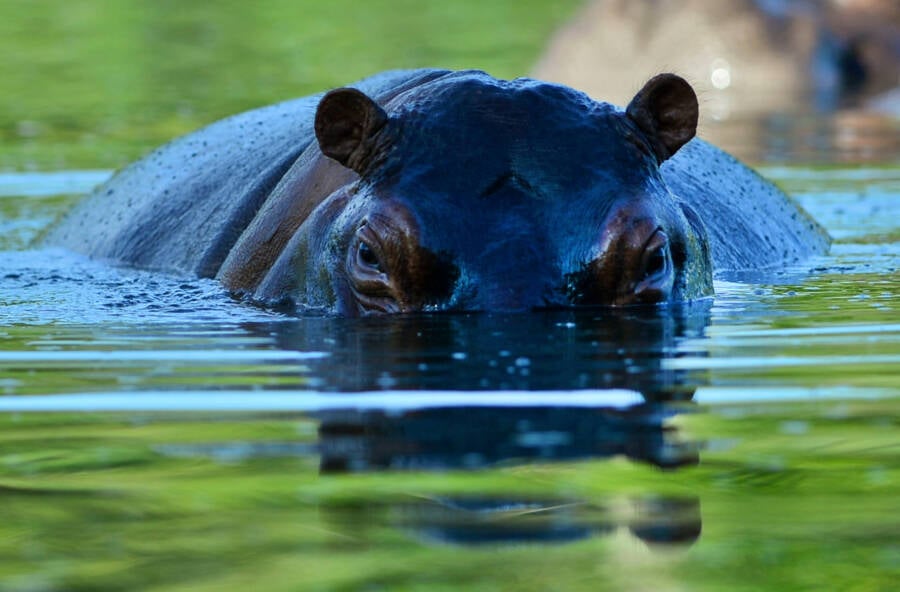 RAUL ARBOLEDA/AFP via Getty ImagesOne of Pablo Escobar’s hippos sits in the water at the Hacienda Napoles theme park, once the private zoo of the late drug kingpin. Today, thanks to Escobar, these “cocaine hippos” in Colombia are a major problem.

It turns out that the legacy of Colombian drug lord Pablo Escobar isn’t tied exclusively to cocaine trafficking and murder. One of his most lasting marks on history might just be the four hippos he once housed in his private zoo and that have since reproduced to a population of 80, befouling lakes in Colombia and generally disrupting the ecosystem.

According to recent research, it’s now gotten to the point that Pablo Escobar’s hippos in Colombia are classified as an invasive species and are on their way to numbering in the thousands.

A recent study, published in the journal Ecology, found that these massive “cocaine hippos” have been excreting their waste into the local lakes and substantially changing the oxygen levels and chemistry of the waters.

The researchers, comprised of experts from the University of California, San Diego, and the Universidad Pedagógica y Tecnológica de Colombia, believe the population descended from Pablo Escobar’s hippos will only continue to increase — causing further environmental damage.

The Story Behind Pablo Escobar’s Hippos

A CBS This Morning segment on Pablo Escobar’s hippos in Colombia.

Running at speeds of almost 20 miles per hour on land, hippopotamuses have been known to take down anything in their path, including lions. These living tanks could be the deadliest large land mammal, killing an estimated 500 people per year in Africa.

Thankfully, barring a visit to the zoo, most people in America never need to worry about seeing and potentially being murdered by hippos. However, the same can not be said for Colombians near Escobar’s former private zoo on an estate known as Hacienda Nápoles.

According to the BBC, the zoo featured exotic wildlife such as elephants and giraffes to go along with hippopotamuses. After the Colombian police shot and killed Escobar in 1993, the government took control of the animals.

“The fishermen, they were all saying, ‘How come there’s a hippo here?'” said conservation worker Carlos Valderrama, who investigated the situation. “We started asking around and of course they were all coming from Hacienda Napoles. Everything happened because of the whim of a villain.”

While some were transferred to facilities around the world, Pablo Escobar’s hippos were left behind, eventually escaping and reverting to a more feral state. 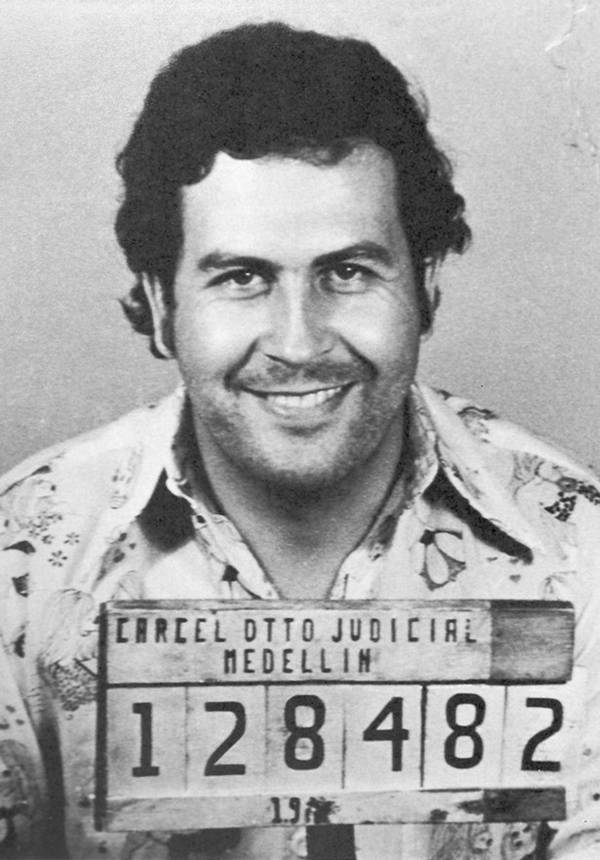 Left to their own devices and resilient enough to prevent their population from dwindling, the “cocaine hippos” thrived. The lack of natural predators cleared the way for their population growth to soar at an alarming rate.

How Hippos In Colombia Are Damaging The Ecosystem 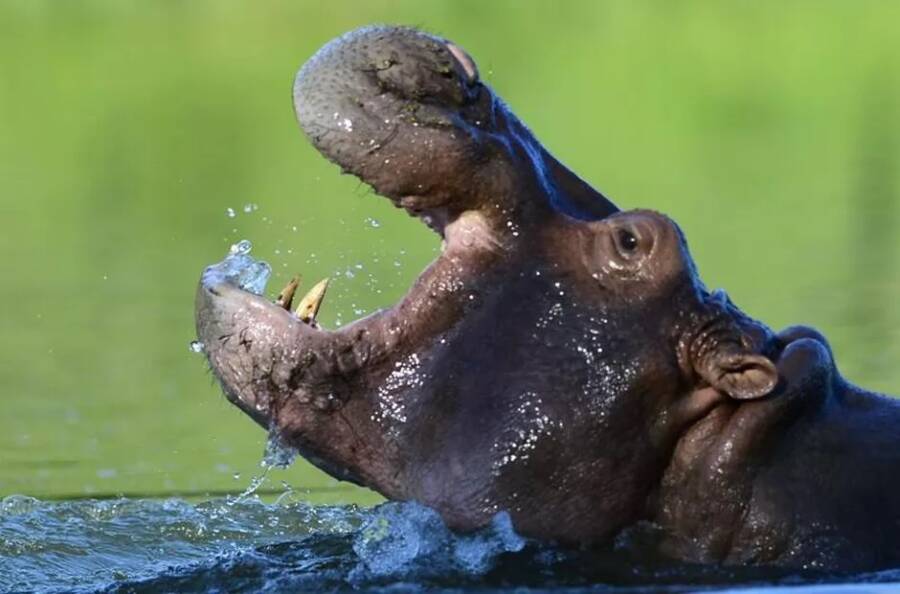 RAUL ARBOLEDA/AFP via Getty ImagesOne of Pablo Escobar’s hippos raises its head from the water at Hacienda Napoles in 2016.

The hippos in Colombia effectively take over whatever lake or river they come across and displace the species native to the region. An otter or a manatee stands little chance against the African behemoth — which is extremely territorial — so other creatures are simply forced out if not outright killed.

Furthermore, scientists are very concerned about the possible effects the hippos’ excrement could have on the Colombian ecosystem. For example, the waste from the “cocaine hippos” adds nutrients to lakes, leading to algae blooms that kill fish.

The latest study found that hippo waste helps fertilize algae and bacteria harmful to both humans and animals. The resulting algal blooms, similar to red tides, can sicken both.

Lastly, given the violent temperament of the hippopotamus and the extreme danger they present to anyone or anything they come into contact with, their populations are very difficult to manage. The outlook for the local ecosystem, then, is rather grim.

“If you plot out their population growth, we show that it tends to go exponentially skyward,” said UC San Diego’s Jonathan Shurin, lead author and biological sciences professor. 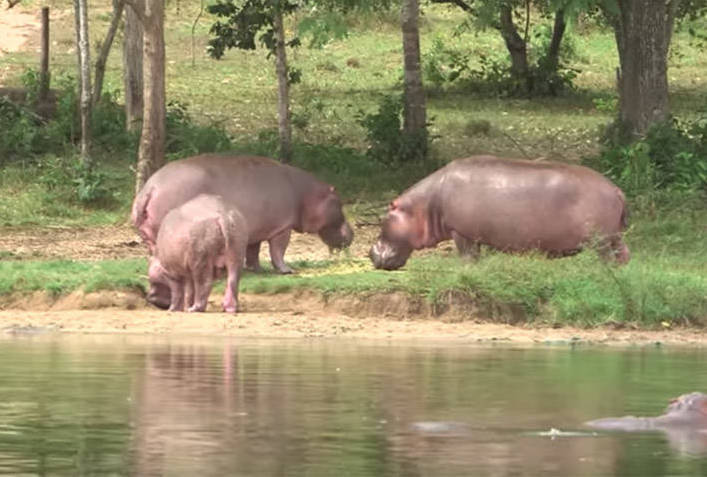 YouTubeHippos roaming alongside a Colombian lake.

“In the next couple of decades there could be thousands of them. This study suggests that there is some urgency to deciding what to do about them. The question is: What should that be?”

The safety and livelihood of locals are also at stake thanks to the “cocaine hippos.” While no one has been slain by a hippo yet, the animals have already damaged farms in the area. Occasionally, one will make its way to the center of town and send the people into a panic. 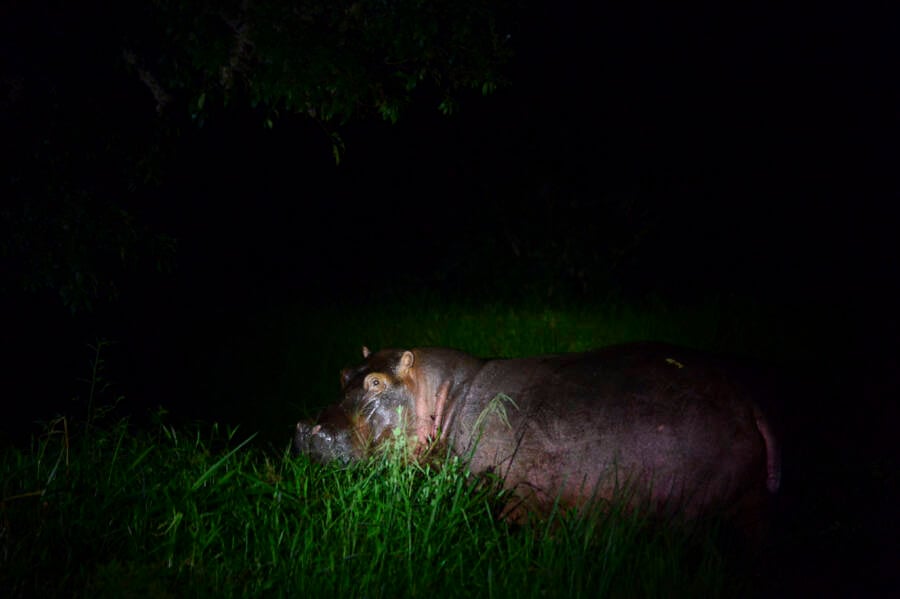 RAUL ARBOLEDA/AFP via Getty ImagesA hippo feeds at a farm on the outskirts of Doradal, Colombia, near Hacienda Napoles.

Local and federal governments have tried various solutions to the region’s hippo problem. They tried initiating a hunting program, but nobody wanted to kill the hippos, and eating them could potentially give people diseases such as leptospirosis.

The government has also attempted to castrate the mammals, but hippos are sensitive to chemicals. That means they would have to be castrated manually, which is, for obvious reasons, a challenging endeavor. To further complicate matters, as a defense mechanism, their testicles are hidden inside their bodies.

Pablo Escobar almost surely didn’t anticipate the damaging effects that hippos in Colombia would have, but long after his criminal empire has been forgotten, the descendants of his original pet hippos will continue their species’ lumbering, destructive march across the region.