In 1990, Pamela Smart's 16-year-old lover Billy Flynn killed her husband Gregory Smart. And after a highly-publicized trial, Pamela was sentenced to life in prison as an accomplice. 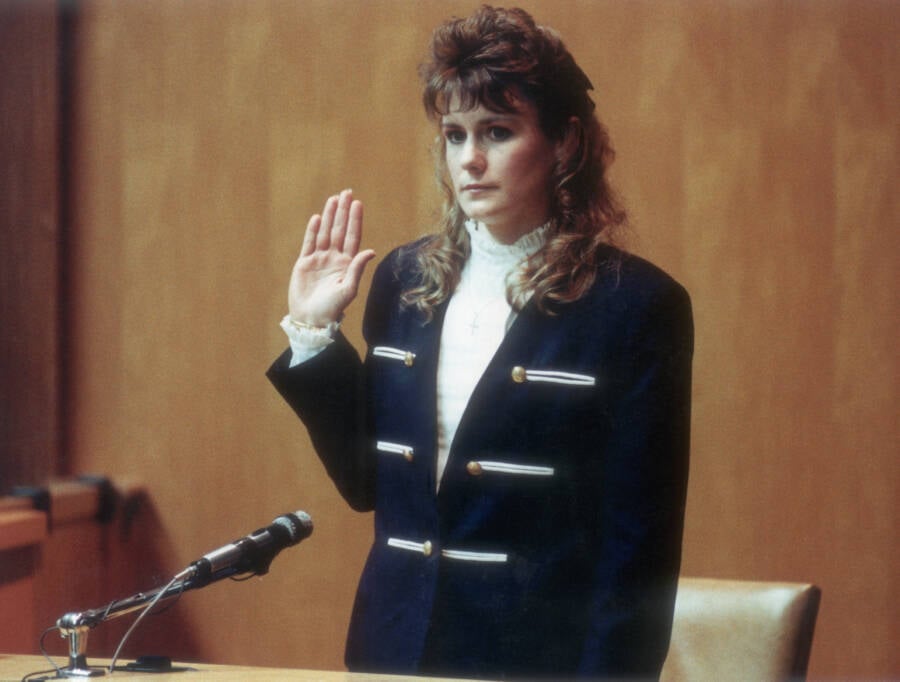 Bettmann/Getty ImagesPamela Smart in court for the murder of her husband Gregory Smart in 1991.

As Pamela Smart tells it, May 1, 1990, started out like any other day. She went to work at Winnacunnet High School, where she had a job as a media coordinator, and attended a school meeting. Then, she came home — and found her husband, Gregory Smart, dead in a pool of blood.

But what seemed like a random attack turned out to be something entirely different. As police investigated, they found that four local boys had gone to the Smart home in Derry, New Hampshire, that night. And one of them, 16-year-old Billy Flynn, had been having an affair with Pamela.

In a trial that captivated the nation, two fiercely competing narratives emerged. Flynn and his friends claimed that Pamela Smart had encouraged them to murder her husband. Smart, on the other hand, flatly denied it.

Though both Smart and the teenage boys were sentenced to prison, Flynn and his classmates have since been released. Only Pamela Smart remains behind bars, where she’s continued to insist upon her innocence.

The Troubled Marriage Of Pamela Smart And Gregory Smart

Long before her murder trial became “can’t-miss” TV, Pamela Anne Wojas dreamed of being on television. Born on Aug. 16, 1967, she grew up in Miami, Florida, and attended Florida State University to study communications.

There, Smart interned at a local television news station, had her own college radio show, and, fatefully, crossed paths with Gregory Smart during a college break in New Hampshire in 1986. They fell in love quickly — and Gregory moved to Florida to be with Pamela while she finished her studies.

After Pamela graduated, she and her husband relocated to Derry, New Hampshire, where Gregg found a job as an insurance agent. Pamela snagged a role as a media services director for 11 New Hampshire schools. But less than a year after they wed in 1989, cracks began to show in their marriage. 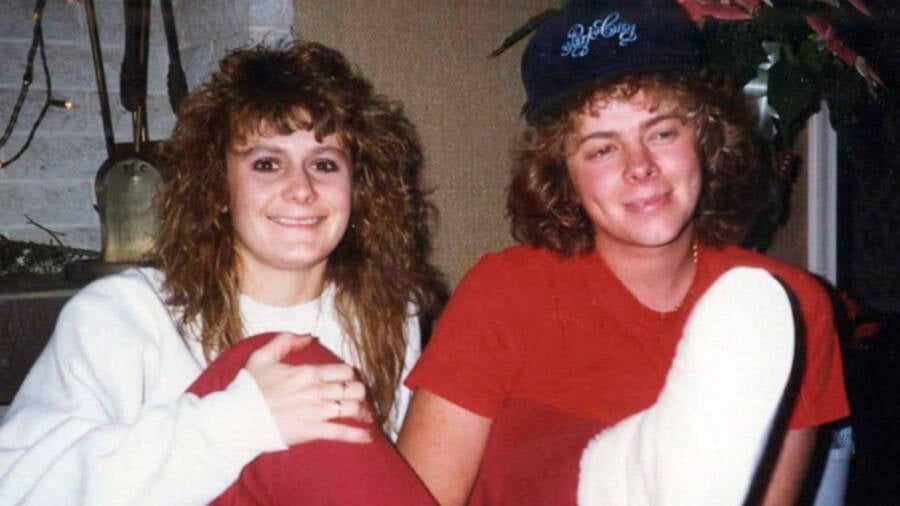 Jupiter EntertainmentGregory and Pamela Smart were married for less than a year before he was murdered.

According to Smart, Gregg came home one night and confessed that he’d had a one-night stand. “I thought there was something wrong with me and I wasn’t good enough,” she told The Washington Post in 2019.

Hurt, Smart threw herself into her work as a media director at Winnacunnet High School in the town of Seabrook. She began to spend time with a 15-year-old student named Billy Flynn, who, like her, enjoyed heavy metal bands.

Their relationship changed in February 1990 when Smart reportedly told Flynn: “Do you think about me? Because I think about you all the time.”

Pamela Smart and Billy Flynn then began a sexual affair — but they tell different stories about what happened behind closed doors. Flynn later claimed that Smart started talking to him about killing her husband, alleging that Gregg hit her and that he’d take her dog if they divorced.

But Smart says that she felt guilty the entire time. “Every day, I would say, ‘I’m not going to do this anymore,'” she told New Hampshire Magazine in 2016, “and the next day I was doing it again.”

She claims that she eventually broke things off with Flynn and told her husband about the affair. Gregg apparently forgave her, and things seemed to return to normal — until May 1, 1990.

The Murder Of Gregory Smart At The Hands Of Billy Flynn

On May 1, 1990, 22-year-old Pamela Smart allegedly came home from work and found her husband lying in a puddle of blood. Someone had ransacked their apartment, and Smart’s 24-year-old husband had been shot in the back of the head.

In the aftermath, Smart publicly speculated that his killer had been “some jerk, some drug addict person looking for a quick 10 bucks,” according to The New York Times.

But police soon realized that Gregory Smart’s murder wasn’t as simple as that. According to Oxygen, investigators received an anonymous tip that Pamela Smart had been involved in her husband’s death. Meanwhile, two of Flynn’s friends, Pete Randall and Vance Lattime Jr., admitted to a classmate that they’d helped him kill Gregg. 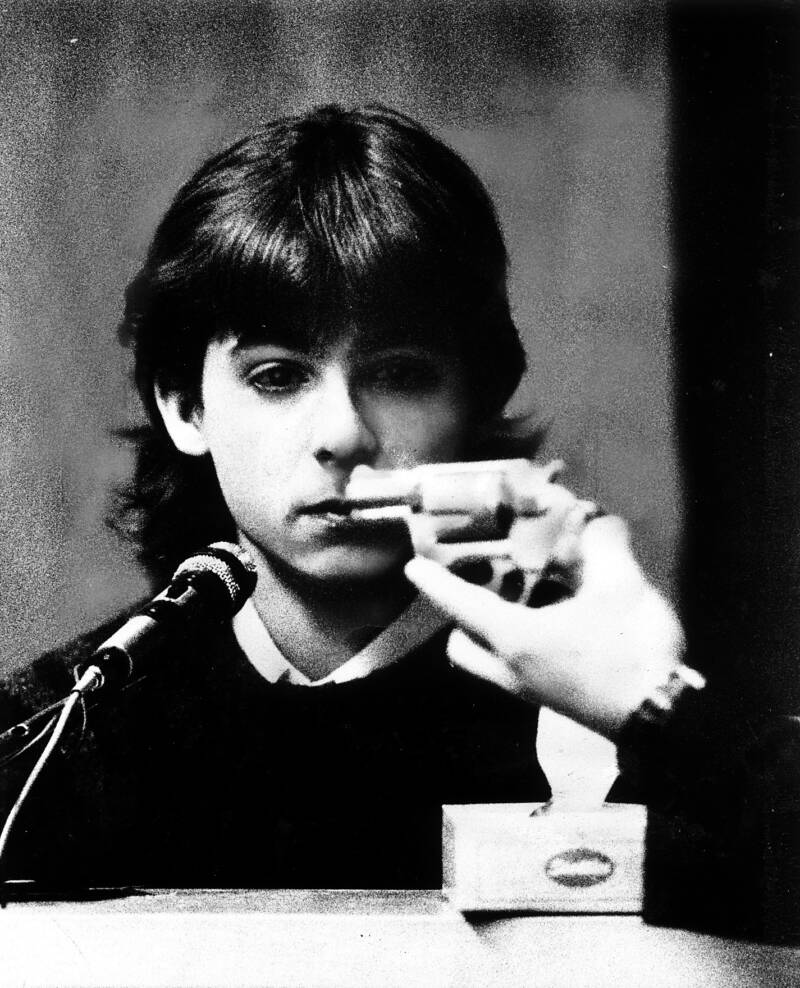 Jim Mahoney/MediaNews Group/Boston Herald via Getty ImagesDuring the trial, Billy Flynn stares at the gun he is alleged to have used to kill Gregory Smart.

The police brought in the boys, who quickly agreed to cooperate for reduced sentences. According to The Washington Post, the boys told police that Pamela Smart had orchestrated the entire murder. They claimed that she’d left the condo door unlocked, given them money for ammunition, and suggested they make Gregg’s death look like a burglary.

At the same time, police convinced another student of Pamela’s, Cecile Pierce, to wear a wire and get Smart to talk about the murder. “You’d be better off just lying to the police,” Smart told Pierce on the recording. “We’d go to the slammer for the rest of our lives.”

Damningly, she also told Pierce that Gregg’s death would have been “the perfect murder” if Flynn’s teenage accomplices hadn’t said anything to their classmates.

Police arrested Pamela Smart on Aug. 1, 1990, three months after her husband’s death. The subsequent trial became an international media sensation, with reporters descending from as far away as Israel to cover every moment.

According to New Hampshire Magazine, the press swiftly dubbed Pamela Smart an “ice princess.” On the other hand, Flynn was portrayed as a a more sympathetic figure because he openly sobbed on the stand while describing how he shot Gregory Smart as his friend held a knife to his throat.

He claimed that Pamela Smart had told him that he had to kill Gregg or they couldn’t be together. Pamela Smart, to this day, insists that she said no such thing.

On Mar. 22, 1991, the jury found Pamela Smart guilty of witness tampering, conspiracy to commit murder, and being an accomplice to first-degree murder. The judge then deemed that the 23-year-old would spend the rest of her life in jail.

Where Is Pamela Smart Today?

As of 2022, Pamela Smart remains behind bars at the Bedford Hills Correctional Facility for Women in New York state. Billy Flynn, Pete Randall, Vance Lattime Jr., and a fourth boy who waited in the car, have since been paroled after serving long sentences.

Now Pamela Smart believes it’s time for her to walk free, too. 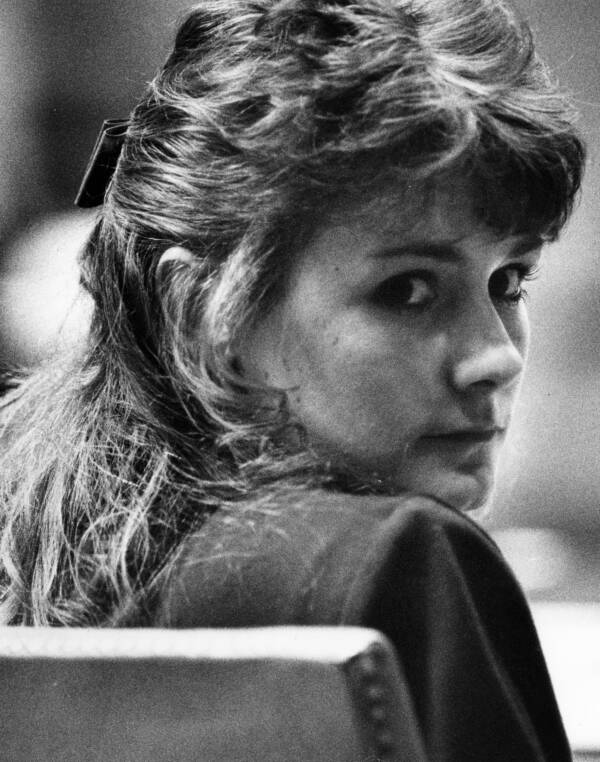 Suzanne Kreiter/The Boston Globe via Getty ImagesPamela Smart was dubbed an “ice princess” by the press for her steely testimony.

Though she’s always maintained that she didn’t know that Flynn had planned to kill her husband, Pamela Smart has recently begun to shoulder some of the blame for Gregg’s death, acknowledging that he wouldn’t have died if she hadn’t had an affair.

When she appealed for a sentence reduction in December 2021, Smart said, “I offer no excuses for my actions and behavior. I’m to blame.”

She added, “I regret that it took me so long to apologize to the Smart family, my own family, and everyone else. But I think that I wasn’t at a place where I was willing to own that or face that. I was young and selfish and I wasn’t thinking about the consequences of what I was doing.”

According to People, Smart’s appeal for a reduced sentence was denied in March 2022, and she’s now asking for a New Hampshire court to hold a hearing about her request.

In a letter to the New Hampshire governor, reported by WMUR, Smart reiterated her acceptance of her role in Gregg’s death.

“I have now spent over 31 years in prison, more than half my life,” she wrote. “I apologize to the entire Smart family, my own family, and all who were directly or indirectly impacted by my actions and misjudgment.”

To date, the New Hampshire Executive Council hasn’t announced any decision in Pamela Smart’s case. But Smart — and her supporters, including Gloria Steinem — are hopeful that they’ll have mercy and let her walk free.

“I would rather be put to death,” she told The Washington Post, “than die in here of old age.”

After reading about Pamela Smart, discover the story of Mary Jo Buttafuoco, the woman shot in the face by her husband’s teenage lover. Or, learn about the murder of Cassie Jo Stoddart, the teenager killed by her classmates.