After a petition by local villagers, Patrick the Pony made history in Cockington Village as the U.K.'s first pony mayor. 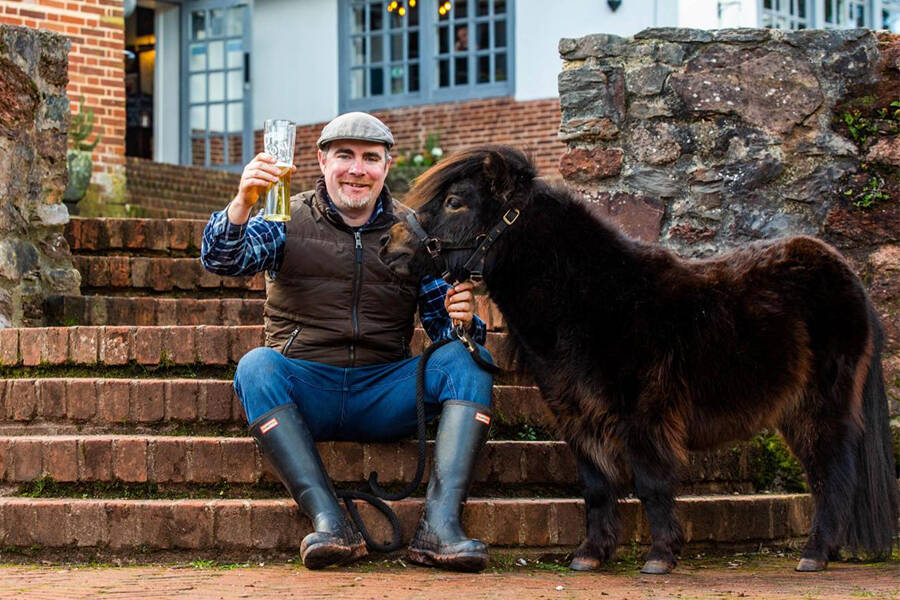 SWNSPatrick’s owner said he’d be a great mayor “for being non-judgmental and genuinely caring and supportive to all.”

Cockington Village is a quaint, idyllic English small town, rife with cottages and cobblestone galore. The small village recently made history, however, when it appointed a miniature Shetland pony named Patrick as the town’s mayor.

As Food & Wine reported, Patrick’s owner, Kirk Petrakis, started taking Patrick around the town and to the local pub, The Drum Inn, early on in the pandemic to acclimate the pony to socializing. The reason? Patrick is a therapy pony, and since his arrival in Cockington two years ago, he has gone on to visit hospitals, mental health wards, recovery groups, and schools.

Patrick became so beloved by the townsfolk of Cockington that they reserved a special space for him at The Drum Inn, where he’s been known to enjoy the occasional Guinness along with his carrot.

The Mail reported on Patrick’s first visits to the pub back in 2020, with Petrakis telling them that the daily pub visits were “a highlight” for the Shetland pony.

“It is not your usual sight down the local,” he said. “It is a bit of fun for everyone and Patrick enjoys it too. People want to come and cuddle him. Some drinkers do wonder though if the beer they are drinking is a bit too strong.”

For those interested: According to veterinarians, the occasional sip of alcohol is not considered dangerous for horses, who have been drinking fermented products for “millennia.” 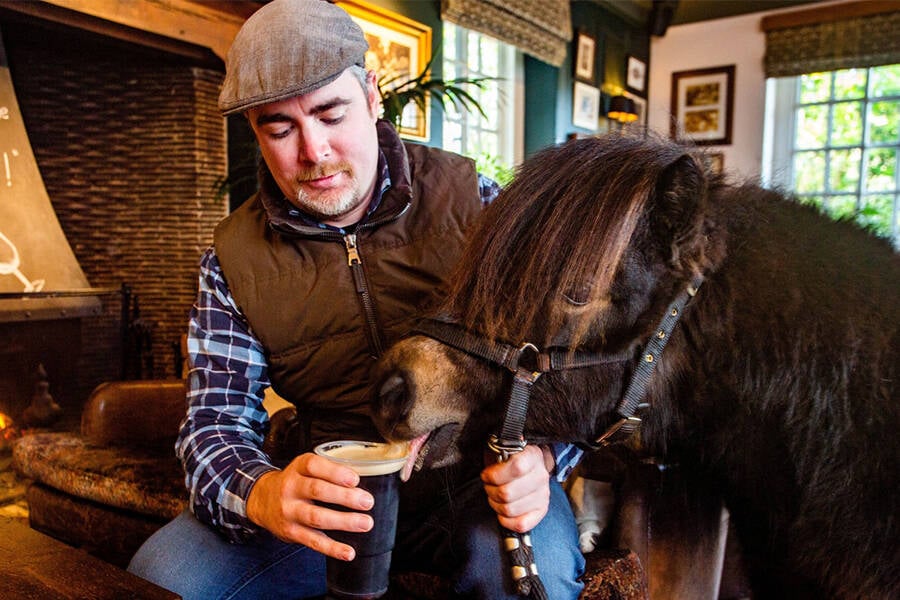 SWNS“The daily pub visit is all part of his routine and is his highlight. He likes a sip of Guinness and he has a carrot – that’s it,” Petrakis said.

Patrick’s pub visits skyrocketed him to local fame, and the town held a second birthday celebration for him at The Drum Inn on Saint Patrick’s Day in 2020. Now, Patrick has become so essential to the town, they’ve decided to name him their mayor.

Cockington Village’s previous mayor died in 2019, and since the position hadn’t yet been filled, Petrakis decided to create a petition on Change.org to offer the title to the town’s cherished therapy pony. Petrakis admitted that the petition was a tad tongue-in-cheek to start, but with hundreds of signatures in support, Patrick the pony has truly become the mayor of Cockington Village.

“People are saying Patrick will do better than the Mayor of London,” Petrakis told Express. “Patrick will go and see anybody, but you’ve got real politicians who are sitting on the fence, or lying to your face at the moment. The community needs something nice and something you can relate to.”

Could a pony really do a better job in public office than a human? The villagers of Cockington certainly think so. To them, Patrick has been a loving and loyal member of the community.

Already, Patrick has helped raise money for Ukraine and funds for two defibrillators in Cockington, but his generous deeds don’t stop there.

Petrakis shared the story of Patrick visiting a woman who was struggling with mental health, her anxiety so crippling that she feared leaving her house altogether amidst the ongoing pandemic.

“She walked around the village with Patrick and it really helped her,” Petrakis said. “Now, her family says she’s running, and she’s living her life again and that’s because of Patrick. It blows me away, it really does.”

Moreover, he said, there’s a distinct lack of trust nowawadays between humans — especially when it comes to politicians. In that sense, Patrick was the best candidate the town could have chosen.

In fact, Patrick’s mayoral swearing-in ceremony was attended by other public figures, including local councilors Andrew Barrand and Hazel Foster and Member of Parliament Kevin Foster. At the ceremony, Patrick was presented with a light-up mayoral chain. Petrakis described the event as “a really lovely occasion.” 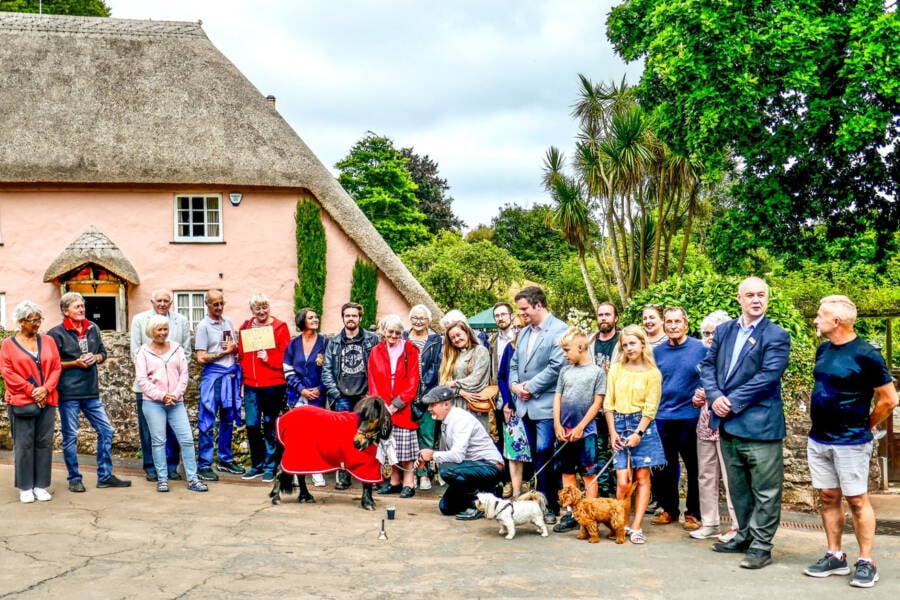 Barrand, councilor of the Cockington and Chelston ward, felt that Patrick’s impact on the community was so great, he didn’t see any reason why the pony shouldn’t be given the mayoral title. “Patrick has been amazing,” he said. “Everyone loves Patrick as he is so easy to get on with, particularly for children and old age pensioners here.

“Everyone is talking about mental health at the moment, and he is helping with that here. He is a great little chap.”

It should be noted that while Patrick’s ceremony was attended by local politicians, his mayoral title is only in an unofficial capacity. In other words, Patrick won’t be making any policy decisions for the town.

Still, while we can’t expect to see whether Patrick would vote “yay” or “neigh” on any policies, Petrakis and his wife Hannah are posting regular updates about Patrick’s day-to-day activities on his website and social media accounts.

Perhaps a human would let the sudden success and social media fame go to their head, but for now, at least, Patrick seems content simply making people’s days better and sipping on a Guinness.

After reading about Patrick and his appointment to unofficial mayor of Cockington, read about Sweet Tart, who became mayor of a small town in Michigan. Then, see the one-of-a-kind story of Mayor Stubbs, the cat who was mayor of an Alaskan town for two decades.