Why An Australian Senator Wore A Burqa To Parliament (VIDEO) 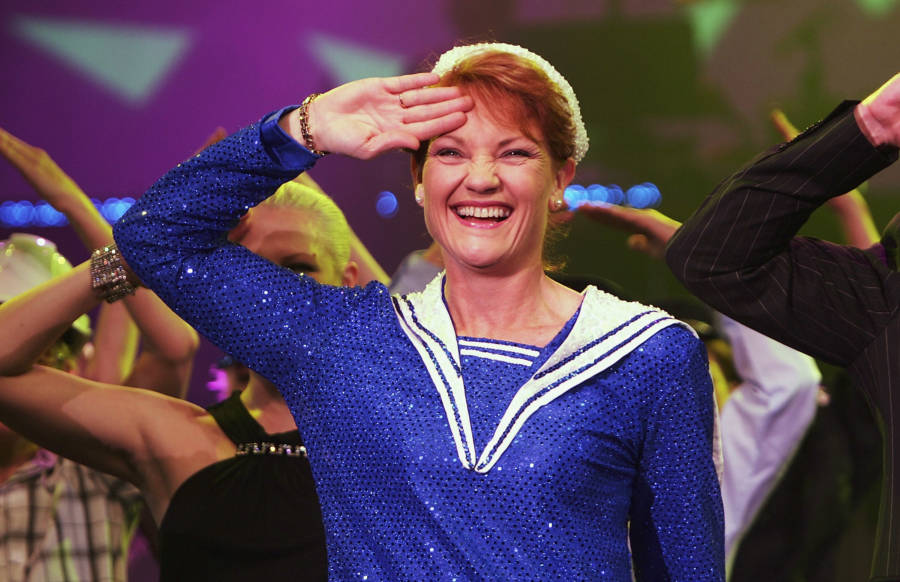 “What on earth?” a fellow legislator can be heard muttering as the senator takes her seat.

Here’s the video of Pauline Hanson wearing a burqa in the Senate. The reaction of the Liberal senators was mouth open shock. pic.twitter.com/85eh8LW9Iz

To be clear: Hanson is not Muslim. She wore the religious garment in a twisted effort to prove that it should be banned in Australia.

“I’m quite happy to remove this because this is not what should belong in this Parliament,” she said, revealing her disheveled, bright red hair.

Hanson is well-known for making bigoted statements. She was rejected by her political party after sparking international outcry over what she said about indigenous Australians in her first Parliamentary speech.

“I am fed up with being told, ‘This is our land.’” she said, arguing against why native Australians should get loans unavailable to non-aboriginals (whose ancestors stole all of the land). “Well, where the hell do I go? I was born here, and so were my parents and children. I will work beside anyone and they will be my equal but I draw the line when told I must pay and continue paying for something that happened over 200 years ago.”

She has also said that Australia is “in danger of being swamped by Muslims” and “swamped by Asians.”

Speaking on African immigrants, Hanson said “Do you want to see your daughter or a family member end up with AIDS? Or anyone for that matter?”

After the Orlando nightclub shooting in 2016, Hanson posted a video calling for a Muslim ban in Australia.

“We have laws here that we don’t bring in pitbull terriers because they are a danger to our society,” she said. “We have laws to protect Australians.”

It shouldn’t be surprising, then, that someone who compares an entire religious group to a breed of dog would pull a stunt as insensitive as wearing a burqa (often meant as an expression of modesty) to make a political point.

And yet, people are still surprised.

“To ridicule that community, to drive it into a corner, to mock its religious garments is an appalling thing to do,” Attorney General George Brandis, a member of the conservative Liberal Party, said of Australia’s 500,000-person Muslim population. “And I would ask you to reflect on what you have done.”

Brandis’ voice broke with emotion during his speech and he received a standing ovation from other senators.

In response, Hanson gave a speech about terrorism — calling it a “true threat to our country,” though there has never been a terrorist attack committed by Muslims in Australia.

In a statement on the stunt, Hanson said that banning the veil was an issue that needed to be discussed, saying the coverings were “oppressive, presented barriers to assimilation, disadvantaged women from finding employment” and “had no place in modern Western society.”

“I want people to take out of this that I am an Australian that has not lost my voice due to political correctness and pressure from minority groups that have come here,” she said.

PAULINE HANSON | “I am an Australian who has not lost my voice due to political correctness.” #auspol@PaulineHansonOZ @pm_live @PMOnAir pic.twitter.com/8QtXchDE6i

So good news, America. We’re not the only country dealing with bigotry, white supremacy, and incompetent leaders. Yay?

Next, read about the most outlandish reason an anti-immigration party came up with to ban burqas. Then, see how Australia is fighting global sex tourism by taking away pedophiles’ passports.