Peter Kürten — The Sadistic Crimes Of The Vampire Of Düsseldorf

From murdering children to drinking blood, Peter Kürten was "the king of the sexual perverts" and perhaps the worst serial killer ever.

The early morning sun was rising over the grounds of Klingelputz Prison in Cologne, Germany, as a man named Peter Kürten entered the execution courtyard on July 2, 1931.

Just shy of 50 years old, he was of average height with neatly combed dark hair and one of those faces that could resemble anyone. In fact, if you looked hard enough, he almost resembled a far more famous German citizen, whose rise to fame just a few months later would vastly overshadow this man’s crimes, effectively hiding him from the pages of history.

Flanked by the prison’s priest and psychiatrist, he was on his way to the guillotine to answer for the heinous crimes he had committed over the past 17 years. His crimes included burglary, arson, attempted murder, rape, cannibalism, and murder. The list of his victims surpassed 30 and could have been anywhere from 35 to 70.

The more one reads about Peter Kürten, the worse it gets. 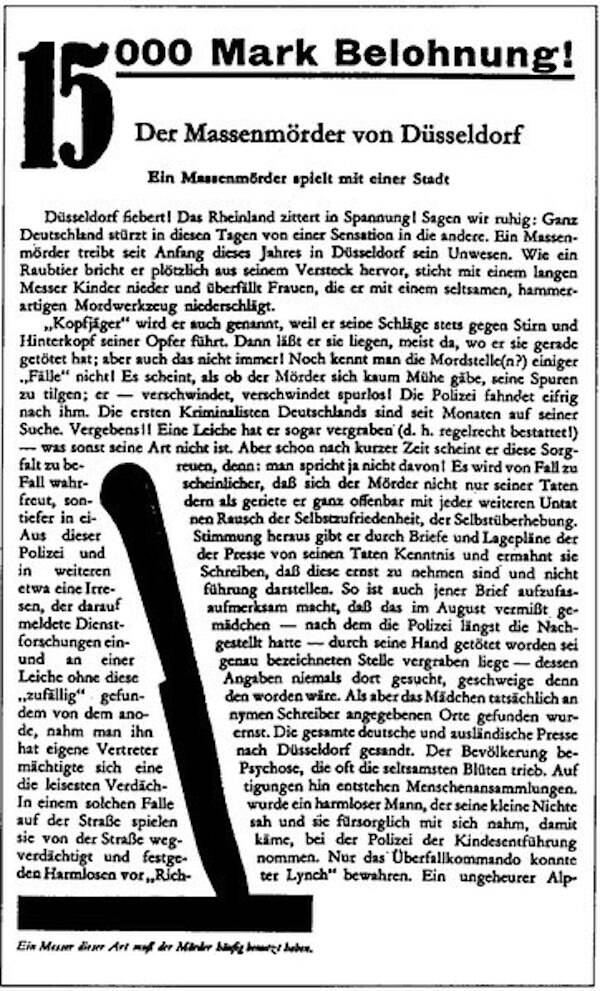 Who Was Peter Kürten?

Known as the Vampire of Düsseldorf and the Düsseldorf Monster, Peter Kürten spent almost 20 years fulfilling his deepest, darkest desires. As a child, he’d been subjected to abuse, beaten by his alcoholic parents, and forced to watch them have sex. Before he even entered his teens he had attempted to drown one of his playmates and had befriended a local dog-catcher who taught him how to torture and kill the animals he caught.

At the age of 13, Kürten formed a relationship with a girl his age, though she resisted having sex with him. To channel his sexual frustrations, Kürten resorted to bestiality with local farm animals. Worse, he admitted to mutilating the animals in an effort to achieve an orgasm. He was forced to end his behavior when a farmer noticed him stabbing a pig.

In the next few years, Kürten stole all of the money in his household and ran away from home to begin a relationship with a prostitute two years his senior. He would then spend a month in jail for petty theft and four years in prison for fraud.

In 1904, Kürten was drafted into the German army, though he soon deserted. He began committing acts of arson, watching from a distance as emergency teams arrived on the scene. Eventually, he was arrested for arson, was discovered to be a deserter, and tried by the military system.

Though his crimes before were awful, the worst was yet to come.

In May of 1913, Peter Kürten’s urges could no longer be satisfied by prostitutes and farm animals. His time in prison hadn’t deterred him from committing crimes, and shortly after his release, he burgled a home in his neighborhood.

The next day, he returned to the scene by visiting a tavern across the street. Hearing the locals talk about his crimes was something of a high for him and he reveled in hearing their reactions. Over the next few months, again overwhelmed by the need to see the effects of his crime, he would visit the girl’s grave and touch the soil under which she was buried for sexual satisfaction. 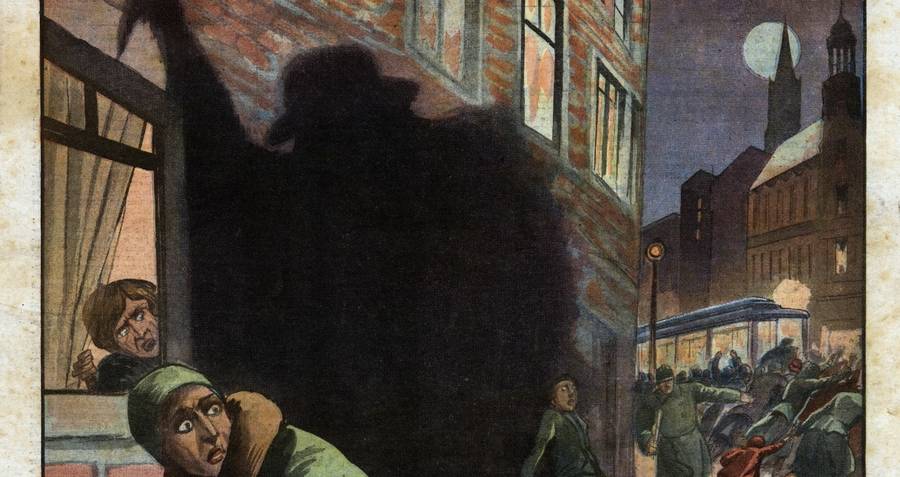 Two months after killing the young girl, Peter Kürten committed the same crime, this time burglarizing the home of a 17-year-old girl. As he had before, he strangled the woman and ejaculated at the sight of her blood.

Though he intended to continue his spree, he was, fortunately, arrested for arson and burglary later that year. He spent eight years in a military prison in Brieg, Germany, before being released in April of 1921.

Upon his release from his fourth period of incarceration, Kürten became engaged to a woman named Auguste Scharf, a shop owner and former prostitute. It was also a perfect match, as Auguste had previously been accused of fatally shooting her former fiancé, whom Kürten had previously posed as to evade arrest.

However, the union was hardly a happy one due to Kürten’s increasing infidelities. Upon realizing that her husband had been sleeping with not one but two of their maids, she encouraged one of them to press charges, claiming Kürten had forced her into having sex. The charge held up in court and Kürten was sentenced to his fifth prison sentence, this time for six months.

After his release, Kürten, of course, picked up his old habits. Over the course of one month, he murdered two people and attempted to murder a third, though she survived her injuries.

Peter Kürten’s preferred method of torture and murder was stabbing, usually with a pair of sharpened scissors. In addition to physical mutilation, he would sexually abuse his victims and strangle them into unconsciousness. He also occasionally returned to the crime scenes, to discuss his crimes with police, under the guise of a concerned citizen.

Over the next several months he attempted to strangle four women, but each of them got away from him. Then, in August of 1929, his killing spree reached an all-time high.

Over the course of the month, he murdered six people. The first was a woman he had stalked for almost a week, whose body he wished to crucify on a decomposing tree, in order to cause a scene for the public. Eventually, he settled for burying her, though he did follow up the murder with a detailed letter to police, including a map to her body.

After writing the letter, in an attempt to throw police off his trail, he switched from his signature pair of scissors to a knife. Additionally, he randomly stabbed three people: an 18-year-old girl, a 30-year-old man, and a 37-year old woman, who all escaped but described their attacker differently, effectively confusing police.

A Murderer On The Loose

Three days after the random stabbings, Peter Kürten murdered a pair of sisters, one by strangulation, the other by slicing her neck. For the first time, Kürten engaged in cannibalism, drinking the blood of the younger girl as it poured from her neck.

The next month, Kürten murdered two servant girls, this time using a hammer to strike them over the heads. He also stabbed a child, leaving her for dead in an alleyway, in what would be his final murder.

On May 14, Kürten attempted to seduce and murder a 20-year-old woman named Maria Budlick. She made it as far as his apartment before realizing his intentions and fleeing the scene. However, she didn’t report her ordeal to the police, instead detailing the event in a letter to a friend. As luck would have it, she incorrectly addressed the letter and it ended up in the hands of a postal worker, who thankfully passed it onto police. 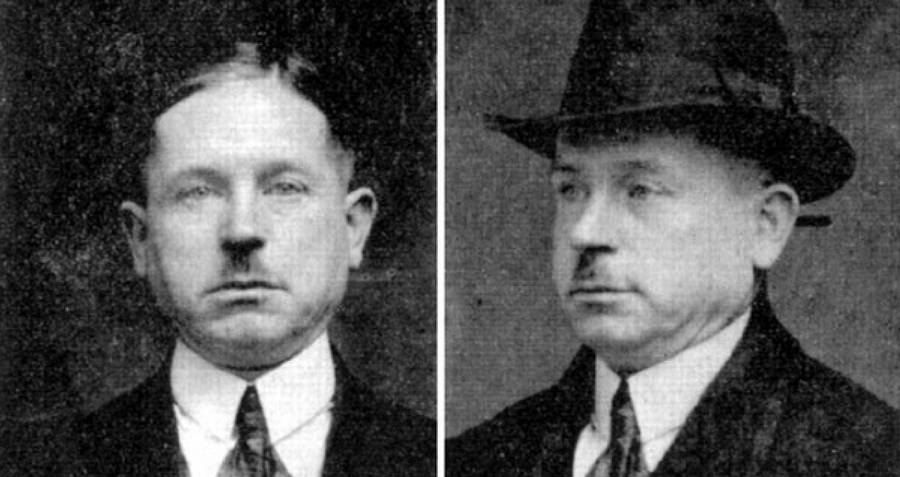 At the same time that the police were reading Budlick’s letter, Peter Kürten was confessing his crimes to his wife. Incredibly, she had managed to stay married to him and apparently remained completely unaware of his crimes. As Kürten knew there was a reward out for him, he suggested that his wife be the one to turn him in. That way, there would be money left for her after his imminent incarceration.

A Final Arrest And The Horrifying Trial

As soon as he was arrested, Peter Kürten folded and immediately confessed to the crimes while expressing no remorse. In all, he ended up admitting to 68 crimes, including 10 murders and 31 attempted. He justified the crimes, claiming that they were revenge for the horrors that life had inflicted upon him during childhood and that he was simply claiming what was due to him.

Peter Kürten’s lack of remorse only presented itself further when a judge asked him about his conscience, questioning if the man felt he had one at all.

“I have none,” he responded. “Never have I felt any misgiving in my soul; never did I think to myself that what I did was bad, even though human society condemns it. My blood and the blood of my victims must be on the heads of my torturers … The punishments I have suffered have destroyed all my feelings as a human being. That was why I had no pity for my victims.”

What Were Peter Kürten’s Last Words?

For 10 days the prosecution and the defense argued about Küchen’s motives, his crimes, his conscience, and his punishment before the jury ultimately reached a guilty verdict. He was found guilty of murder and given nine death sentences to be carried out by guillotine.

Upon laying his head down on the machine, he turned to the psychiatrist and asked a question.

“Tell me,” he asked. “After my head is chopped off, will I still be able to hear, at least for a moment, the sound of my own blood gushing from the stump of my neck? That would be the pleasure to end all pleasures.”

The executioner then dropped the blade.

Following his death, Peter Kürten’s head was removed for forensic analysis and eventually found it’s way to the Ripley’s Believe It Or Not Museum in Wisconsin. 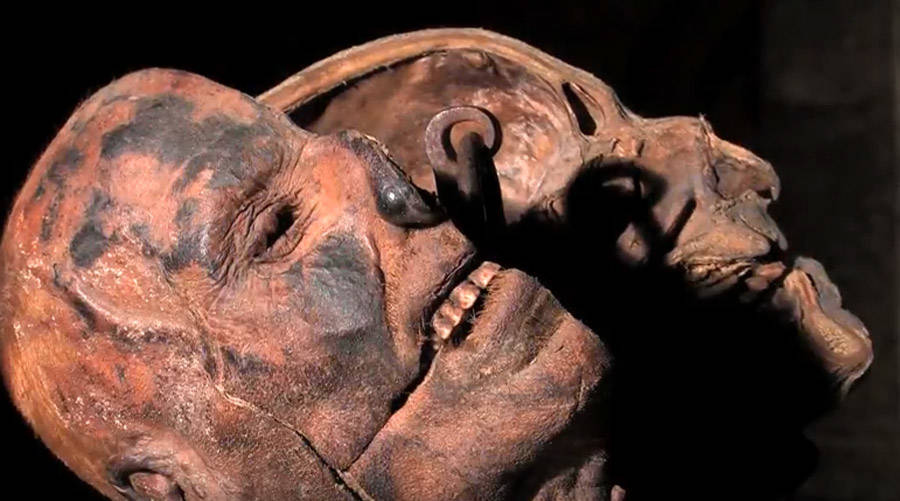 YouTubeThe severed head of Peter Kürten at the Ripley’s Believe It or Not museum in Wisconsin.

Doctors were sure that something must have been wrong with him, for him to have been so passive regarding his crimes. Shockingly, the exam revealed nothing abnormal about him.

After learning about Peter Kürten, the Vampire Of Düsseldorf, read about just how sadistic the Marquis de Sade was. Then, check out the story of Amelia Dyer, one of history’s worst serial killers.