The Disturbing Case Of Philip Chism, The High School Freshman Who Murdered A Teacher In The School Bathroom

Philip Chism was just 14 when he murdered his 24-year-old math teacher Colleen Ritzer at Danvers High School before dumping her corpse behind the school. 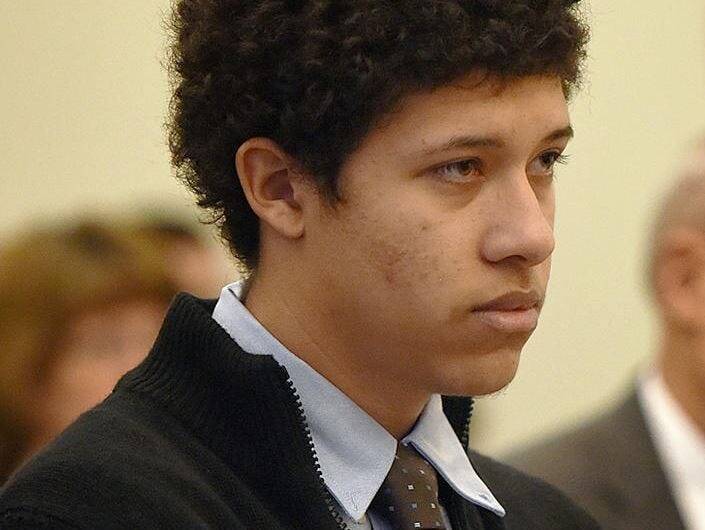 Getty ImagesPhilip Chism was just 14 when he brutalized and murdered his math teacher Colleen Ritzer.

On Oct. 22, 2013, a ninth grader at Danvers High School in Massachusetts named Philip Chism did the unthinkable. At just 14, he brutalized his 24-year-old math teacher, Colleen Ritzer.

The reportedly joyful Ritzer was known to go out of her way to help her students with math and had asked Chism to stay after school that fateful day in October. She did not know the plot Chism had put into motion days before.

At the end of the school day, Chism followed Ritzer into a school toilet. Wielding a box cutter, Chism robbed, raped and killed her, then rolled her body in a garbage can to the woods behind the school. Chism then took himself into town and bought a movie ticket using Ritzer’s credit card.

When police caught him the following morning, Chism had not washed his hands — and still had Ritzer’s blood all over them.

Who Was Philip Chism?

Philip Chism was born on Jan. 21, 1999. In the fall of 2013, Chism had recently moved from Tennessee to Danvers, Massachusetts, where he wasn’t that well known at the school apart from being a good soccer player. One report did refer to him as “anti-social” and “really tired and out of it.” It was also reported that his mother was going through a difficult divorce at the time of the crime. 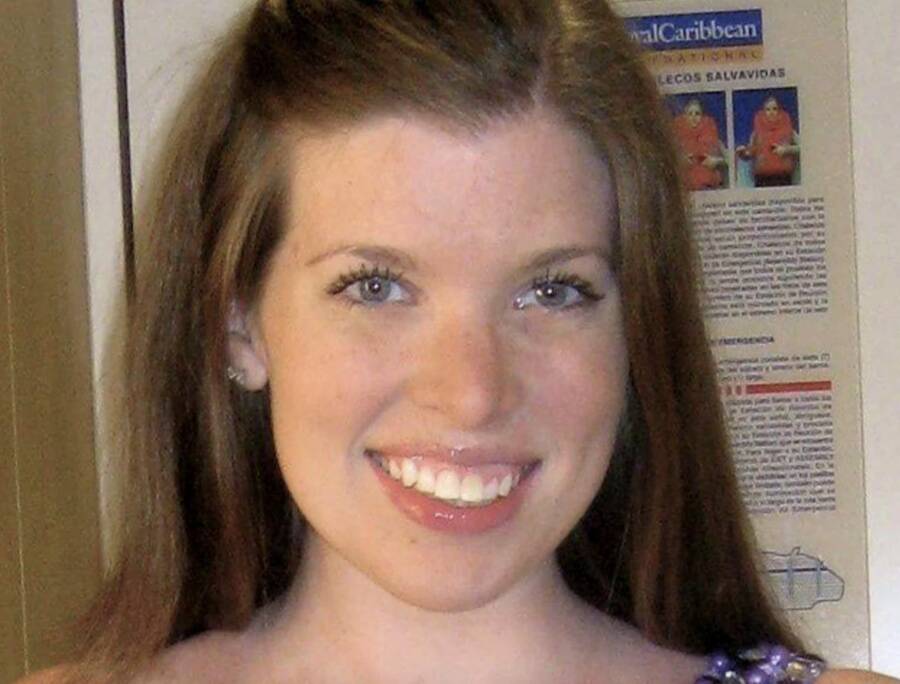 ABC NewsColleen Ritzer was just 24 when she was murdered. She is remembered by faculty and family as a caring teacher.

Ritzer, meanwhile, was a beloved member of the faculty. According to one struggling student, she was always positive and happy. “She made me feel like I wanted to go to math class,” they reported to The New York Times.

And Chism was no exception to her. A student overheard Ritzer complimenting Chism on his drawing skills at the end of class and then requested that he stay after school so she could help him prepare for an upcoming test.

Chism then reportedly grew visibly upset at Ritzer when she mentioned his move from Tennessee, according to Boston Magazine. Ritzer consequently changed the subject, but the student witness later observed Chism apparently talking to himself.

Hours later, he committed the unthinkable.

The Brutal Murder Of Colleen Ritzer 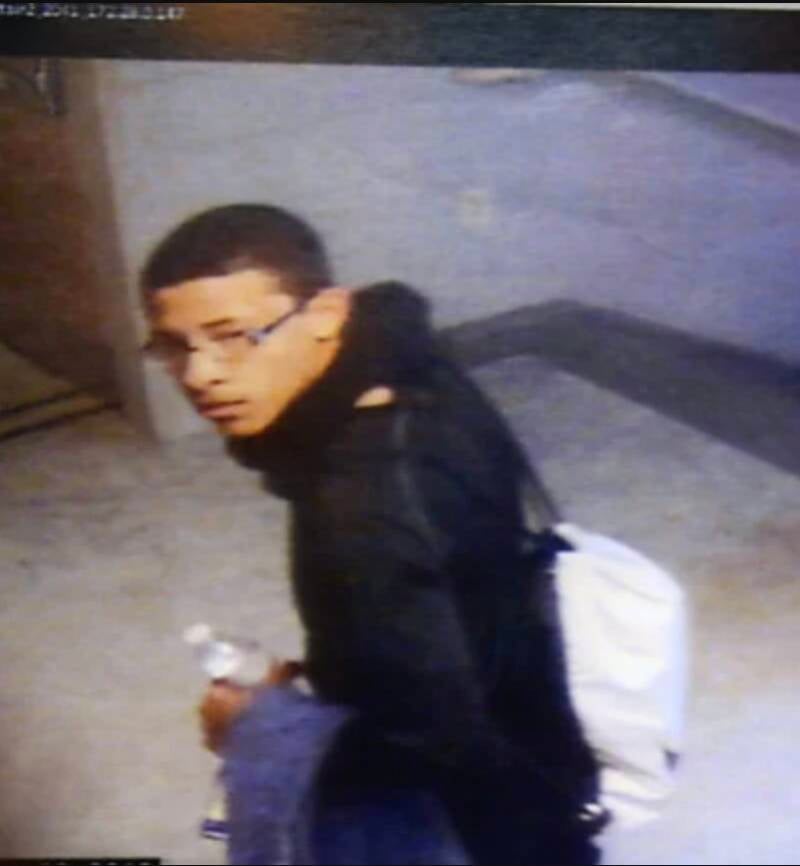 Danvers HS Surveillance VideoFootage of Chism from the school’s CCTV camera on the day he killed Ritzer.

On the morning of Oct. 22, 2013, the Danvers High School’s newly-installed security camera system showed 14-year-old Chism arriving at school with several bags, which he placed into his locker. Contained within his bags were a box cutter, mask, gloves, and a change of clothing.

According to The New York Times, the school security footage showed Ritzer exiting the classroom toward the second-floor women’s bathroom at around 2:54 p.m.

Chism can then be seen walking into the hallway looking her way, then ducking back into the classroom and reemerging with his hood over his head. Trailing Ritzer, Chism pulled on gloves as he entered the same bathroom.

Chism proceeded to rob Ritzer of her credit cards, iPhone, and her underwear, before raping and stabbing her 16 times in the neck with the box cutter. A female student entered the bathroom at one point, but glimpsing someone partially unclothed with a pile of garments on the floor, she quickly left thinking they were getting changed.

Chism appeared in several different outfits throughout the crime, which police later said showed how he’d planned the murder in advance. At 3:07 p.m., Chism left the bathroom with a hood over his head and walked outside to the parking lot. When he came back in two minutes later, he was wearing a new white T-shirt.

Chism then went back to the classroom in a different red hooded sweatshirt over his head, then returned to the bathroom at 3:16 p.m. pulling a recycling bin. He reemerged in the white T-shirt and a black mask, pulling the bin with Ritzer’s body toward an elevator and then outside of the school.

He dragged the bin all the way to a wooded area behind the school, where he raped Ritzer’s lifeless body again, but with a tree branch.

Cameras then picked Chism up coming back into the school, wearing a black shirt and glasses and carrying a pair of bloody jeans, completing his macabre fashion show. 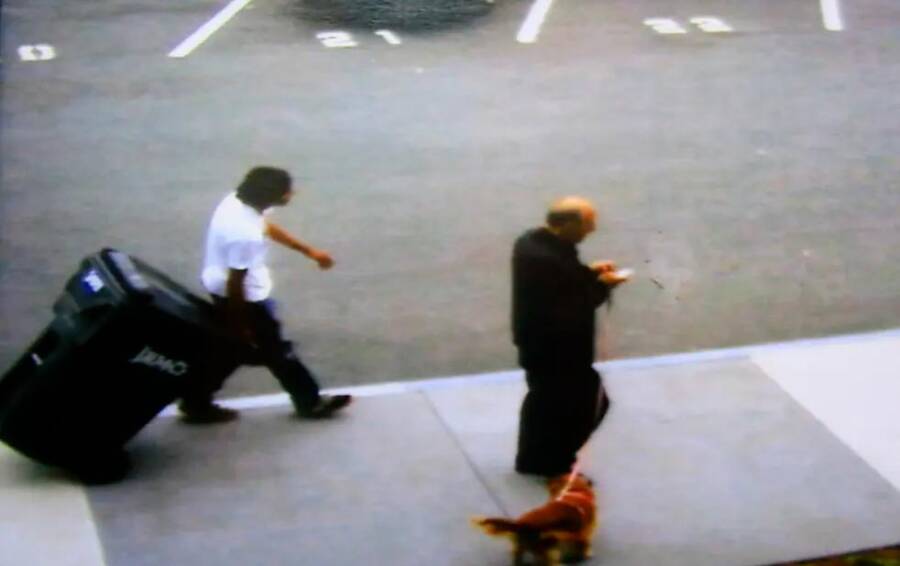 When neither Chism nor Ritzer were seen after school, they were both reported missing. After speaking with students and staff at the school, police found blood in the bathroom, Ritzer’s bag, the bloody recycling bin, and Ritzer’s bloodied clothing near the cross-country path the woods behind the school.

By 11:45 p.m., the CCTV footage was acquired and scoured — and Chism became a suspect. Meanwhile, Chism used Ritzer’s credit card to buy a movie ticket, then left the theater to steal a knife from another store. He was walking along a darkened highway outside Danvers, when he was stopped by police on a routine safety call at 12:30 a.m.

A frisk search of Chism for identification turned up Ritzer’s credit card and driver’s license. Chism was taken to the local station where his backpack was searched and Ritzer’s purse and underwear were found, alongside the box cutter covered with dried blood.

According to court documents, when Chism was asked whose blood it was, he said, “It’s the girl’s.” When asked if he knew where she was, he chillingly replied, “She’s buried in the woods.”

At 3 a.m., police discovered the gruesome sight of Ritzer’s half naked body covered with leaves near a pair of stained white gloves. A branch had to be pulled from her vagina, and a folded handwritten note lay nearby worded, “I hate you all.”

Philip Chism was indicted for the murder, aggravated rape, and armed robbery of Colleen Ritzer. He was tried as an adult, and on Feb. 26, 2016, he was sentenced to serve at least 40 years in prison.

After learning the disturbing story of Philip Chism, read about how Maddie Clifton was brutally murdered by her 14-year-old neighbor. Then, learn the chilling case of Daniel LaPlante, the boy who lived in his victim’s walls.