In the 1920s, Pickfair was the most famous mansion in Hollywood, home to lavish parties and famous guests. But after new owners claimed the property was haunted, it met an unfortunate demise.

Long before “Kimye” or “Brangelina,” there was the original celebrity portmanteau: “Pickfair.” The word combined the names of early Hollywood’s two biggest stars: Mary Pickford and Douglas Fairbanks.

Specifically, Pickfair referred to the power couple’s lavish 15-acre estate in Beverly Hills, which was a popular meeting place for Hollywood stars. 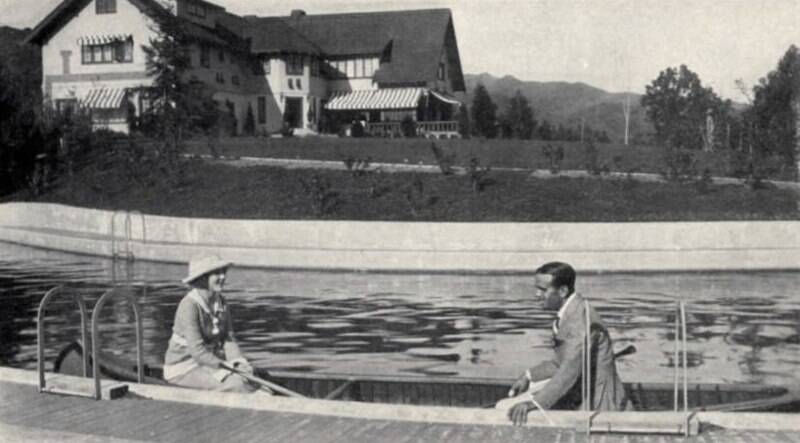 The property had a colorful history highlighted by extravagant parties, famous owners, and claims of paranormal activity. Here’s how it became a prominent part of Hollywood — and why it was ultimately destroyed.

The King And Queen Of Hollywood

Pickfair was in every way an extension of the Hollywood power couple that created it. Mary Pickford and Douglas Fairbanks were the most prominent actors of the 1910s and 1920s. Pickford was the original “America’s Sweetheart,” an actress famed for her beauty and wholesome disposition. 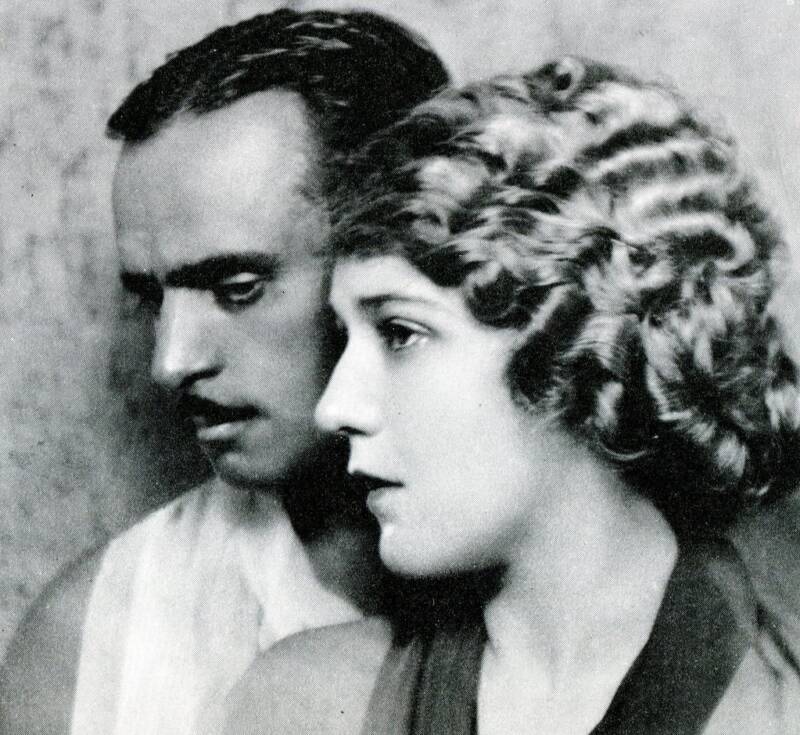 Wikimedia CommonsMary Pickford and Douglas Fairbanks were known as Hollywood royalty during the 1920s.

Her long, blonde-ringleted tresses gave her the moniker “Blondielocks,” and fans were dismayed when she finally cut them. One historian even joked: “You would have thought she’d murdered the American eagle.”

Pickford was beloved by the American public, transitioning successfully from an aspiring actress into a young adult star of early Hollywood.

She starred in the likes of Sparrows, Coquette, and Daddy-Long-Legs, blazing a trail as a producer in a boys’ club era. By all accounts she reigned benevolently as the queen of Hollywood, raising funds for unemployed film workers and later co-founding the production company United Artists.

Meanwhile, Douglas Fairbanks was the perfect king to match his queen: an energetic, athletic actor known for roles in The Mark Of Zorro, The Iron Mask, and The Thief of Baghdad.

He had an eccentric side as well, with a penchant for nude jogging. He even had an underground running track so he could run naked in private.

But he was all-American through and through, born in Denver and exuding the kind of Western can-do attitude that translated well to silent films.

Luxury, Status, And Glamour At Pickfair 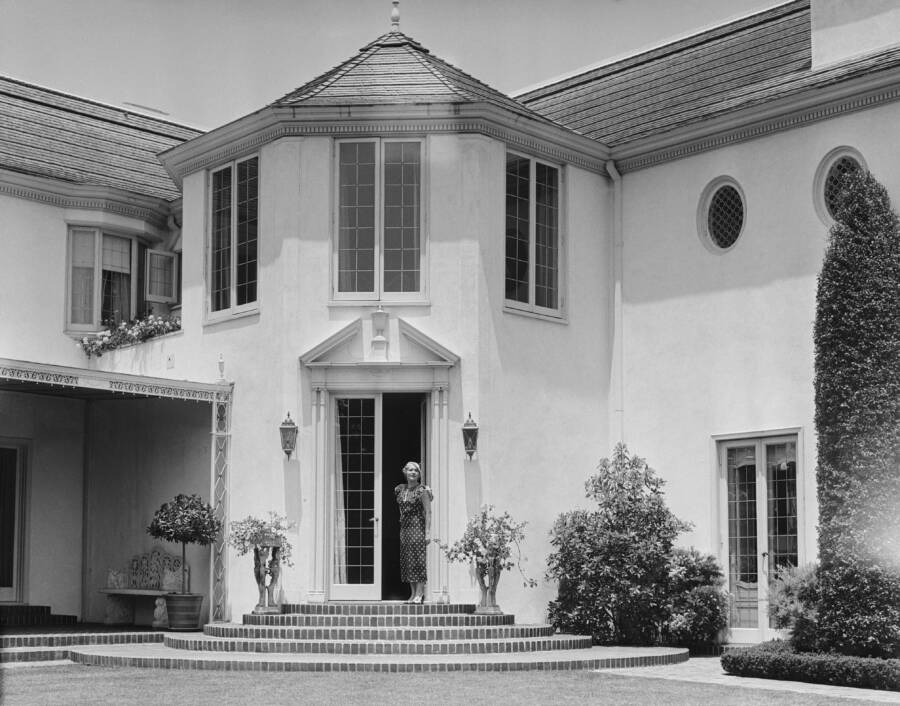 Getty ImagesMary Pickford standing on the front steps of Pickfair.

Despite being married to other people when they first met, Pickford and Fairbanks were immediately drawn to each other and began an affair.

Shortly after their divorces were finalized, they tied the knot in March 1920 and enjoyed the ultimate wedding gift: Pickfair, the stunning ranch-turned-mansion in Beverly Hills.

Although Pickfair started out as a wooded property with a small hunting cabin, it quickly became a luxurious estate with a Tudor-style mansion.

Purchased by the couple in 1919 and transformed by architect Wallace Neff, Pickfair became a 22-room mansion, rumored to be the first private residence in Los Angeles to boast a swimming pool.

It was an architectural marvel, with an impressive art collection and even an old-West saloon. 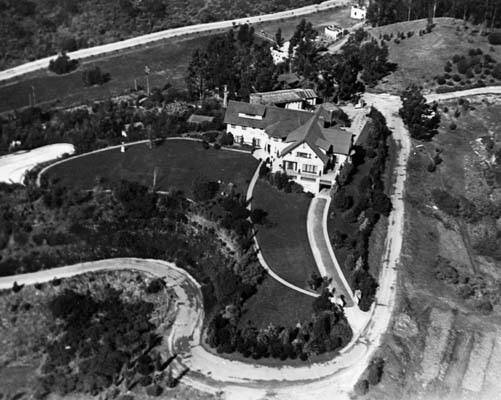 Wikimedia CommonsPickfair seen from above. Circa 1920.

An invitation to a party at this lavish mansion was truly a golden ticket.

Pickfair attracted the most notable individuals in the world, with the likes of Joan Crawford, Charlie Chaplin, and Albert Einstein coming to visit the estate. It also hosted famed author F. Scott Fitzgerald.

Even Lord and Lady Mountbatten, prominent members of the British Royal family, honeymooned at the estate.

Pickfair was so famous that Life Magazine dubbed it: “a gathering place only slightly less important than the White House… and much more fun.” 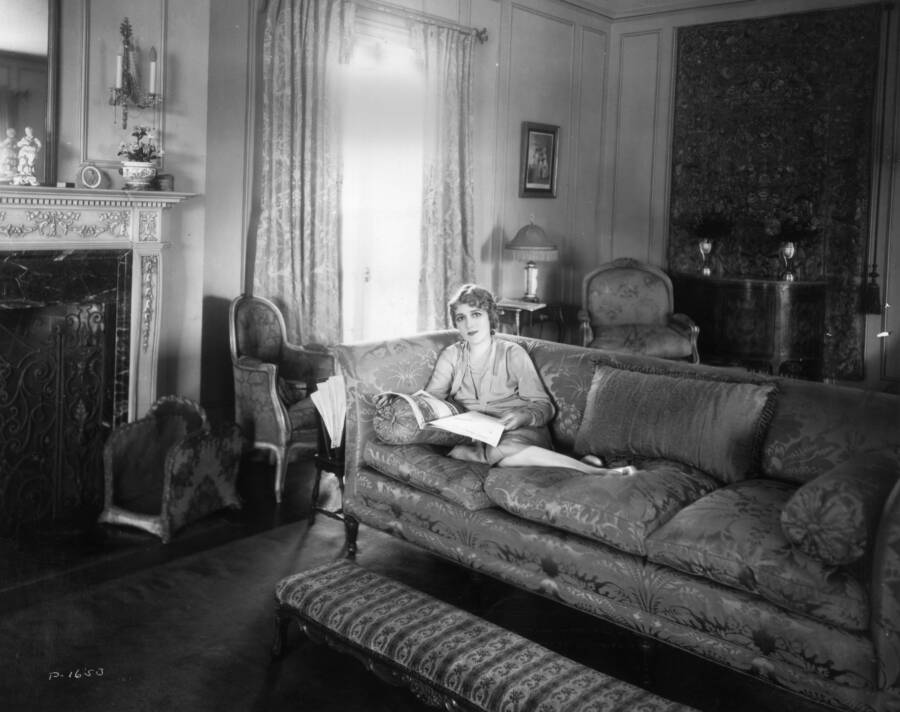 Hulton Archive/Getty ImagesMary Pickford curls up on a divan in the living room of Pickfair.

Pickford and Fairbanks loved to entertain, and did so supremely, throwing the best parties in town. Yet, behind all the glamour of the power couple, their marriage wasn’t perfect.

The couple divorced in 1936, although they stayed connected until Fairbanks’ death in 1939. Pickford lived in the house until her own death in 1979, becoming a near recluse by the end of her life.

The era that made Pickfair what it was passed — but its time was not over.

Buss’s daughter Jeanie recalled: “My dad really had no idea the implications of that home when he bought it. It was a great real estate thing — five acres of land in Beverly Hills. When we went through it, I’ll never forget — [Pickford’s] Oscar was still sitting there.”

Buss realized it would have been more cost-effective to raze the neglected mansion and rebuild, but instead chose to restore and update the famed building instead. Through the 1980s, the Busses capitalized on Pickfair’s splendor and reputation to use it to house lucrative fundraisers. 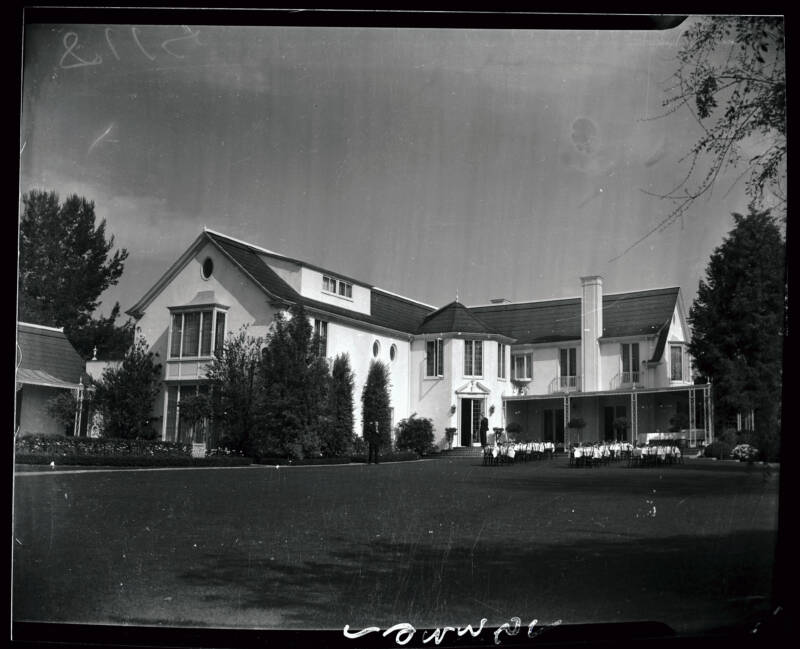 Getty ImagesTables set up outside the Pickfair mansion.

Pickfair changed hands once more in 1988. Singer Pia Zadora and her then-husband bought the property for $6.7 million, thinking it’d be a good place to raise their kids. But then, strange things started to occur.

One night when her husband was out of town, Zadora heard a blood-curdling scream at night. It was her young daughter, who came running and crying about a woman staring at her in the bedroom.

“She said, ‘Mom, I saw this very tall, white, ghost-ish woman standing above my bed when I woke up,” Zadora claimed. “My daughter described this apparition of this woman: She had a white gown on and she was looking at her and laughing.”

Naturally, Zadora suspected it was just her child’s imagination or the stress of moving homes. However, it didn’t take long for her to start seeing and hearing strange things in the home herself — including the laughing woman.

Legend has it that paranormal activity at Pickfair went all the way back to its original owners, Pickford and Fairbanks. The couple reportedly saw the spirit of a female servant multiple times.

As time went on, others reported seeing a ghostly woman wearing white, a male spirit near the entrance, and another apparition carrying sheet music. But while previous owners apparently took these “ghosts” in stride, Zadora and her family couldn’t handle them.

The paranormal activity played a big role in the family’s decision to level the prominent piece of Hollywood history in 1990, leaving only the original gates.

They replaced the iconic building with a Venetian Palazzo-style mansion. Although Zadora originally said that termites were the reason for demolishing the house, she changed her story during a 2012 episode of the show Celebrity Ghost Stories, when she claimed that Pickfair was haunted.

Zadora and her family were heavily criticized for tearing down the Pickfair mansion, which many felt was a notable part of Hollywood’s history.

Among the critics was Douglas Fairbanks, Jr., son of the famous actor who once owned the mansion, who said, “I regret it very much. I wonder, if they were going to demolish it, why they bought it in the first place.”

In 2008, the Pickfair property and its newer mansion was listed for a massive $60 million. 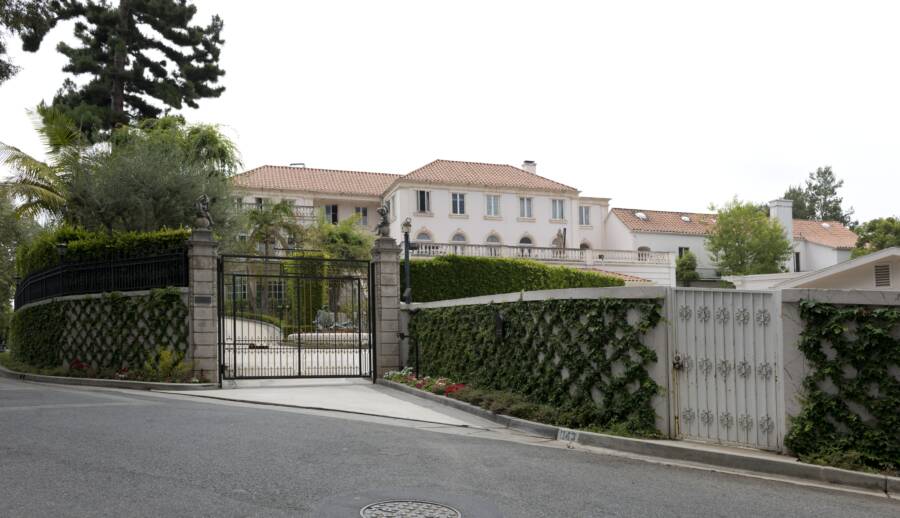 As the center of early Hollywood, Pickfair was richer in symbolism than anything else. All we can do now is remember its interesting story and the Golden Age of Hollywood it represented.

It was a true testament to an epoch gone by, highlighted by famous visitors, elaborate parties, and maybe even a few ghosts.

After learning about Pickfair mansion, learn about the Cecil, Hollywood’s infamous haunted hotel. Then learn about other haunted places in the world that’ll terrify even non-believers.