Built in 1914, Pittock Mansion was nearly razed to create a subdivision in the 1960s before Portland residents came together to save it.

Nestled in the Portland, Oregon’s West Hills neighborhood is Pittock Mansion, a Victorian chateau-style abode — with a haunted history.

Built by Oregonian publisher Henry Pittock, the home once symbolized the heights of Portland’s wealthy elite, but after just four years in its gilded walls, both of homeowners died. Now, it is said both their spirits still hang around the mansion, as many strange occurrences have been reported in the following years.

This is the bizarre story of Pittock Mansion, Oregon’s haunted house. 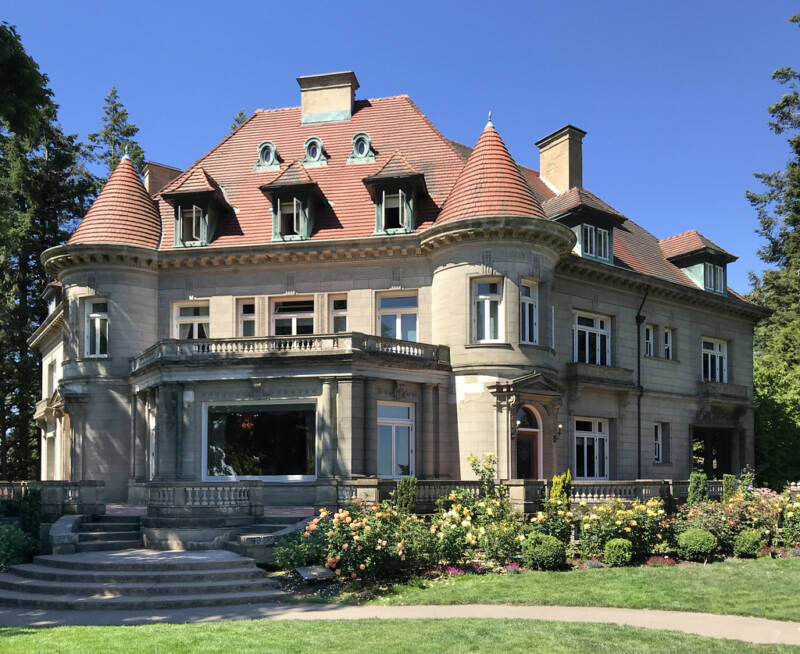 Pittock Mansion, the brainchild of newspaper magnate Henry Pittock, who didn’t live long enough to retire in his inimitable abode.

The Man Behind Pittock Mansion

Mountaineer and publishing magnate Henry Pittock was born in London on March 1, 1835, but he spent most of his childhood in Pittsburgh, Pennsylvania, where he attended preparatory school and worked in his father’s printing business starting at the age of 12.

But inspired by stories of western expansion and the frontier, Pittock and his brother joined two other families traveling West and landed “barefoot and without a cent” in Oregon territory in October 1835. He found work as a typesetter for the founder of the weekly Oregonian in Portland, and eventually became the paper’s managing editor.

Around this time, Pittock met his wife Georgiana. They married in 1860. Pittock went on to become one of the wealthiest men in Oregon society as the man behind the city’s major newspaper, and he consequently invested in a variety of industries, including railroads, banking, ranching, and mining. 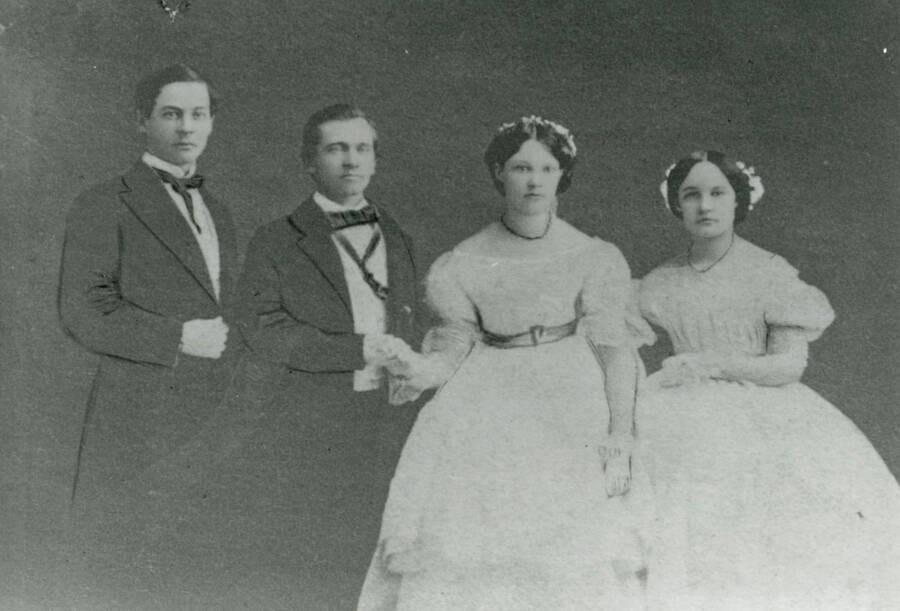 Oregon EncyclopediaHenry and Georgiana Pittock (center) on their wedding day in 1860.

Pittock was also an avid climber and outdoorsman, who helped to found the Mazamas climbing club and became part of the first expedition climb Oregon’s Mount Hood.

Georgiana, too, was an active member of society, becoming involved in many cultural organizations and charities, including the Women’s Union and the Ladies Relief Society. She helped to found the Martha Washington Home, a residence for working women. She was also an enthusiastic gardener and was a founding member of the Portland Rose Society and the Portland Rose Festival.

In 1909, the Pittocks decided that they wanted to build a home in Portland to retire in.

With big plans in mind, the Pittocks hired the architect Edward T. Foulke to design their inimitable mansion from scratch.

The forty-six-room mansion was built on a hill overlooking Portland with a French Renaissance exterior. The inside was uniquely designed, with oak-paneled cabinets, marble floors, a huge central staircase, modern amenities like an elevator and dumbwaiter, and — perhaps most strikingly — beautiful views of Mount Hood and the Cascade Mountain Range.

Foil lines the inside of the entryway ceiling, a nod to  Georgianna’s frugal early years, when she had to save foil from old tea containers in order to decorate the house. 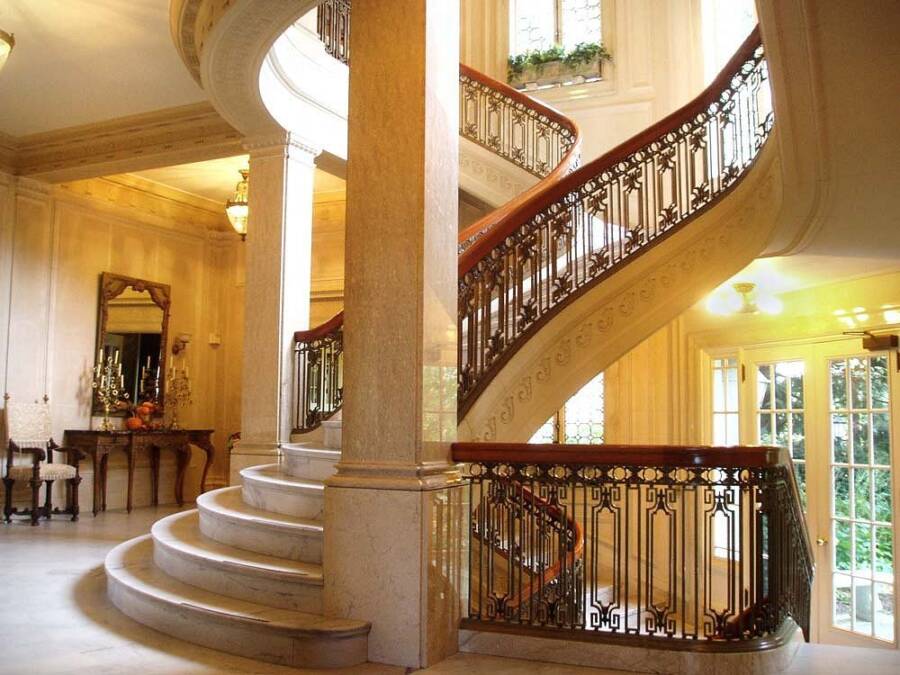 TripAdvisorThe grand staircase in Pittock Mansion was surely an architectural marvel in its day.

Pittock Mansion was completed in 1914 when Georgiana was 68 years old and Henry was 80. Sadly, the couple did not have many years left together to enjoy the home they had built. Georgiana passed away in 1918, just four years after construction was completed, and Henry died the following year.

Members of the Pittock family remained in the home for many years, until their grandson, Peter Gantenbein, who had grown up in the house, attempted to sell it in 1958.

Gantenbein was unable to do so, and the house consequently sat empty for several years. It was severely damaged as a result of the massive Columbus Day Storm of 1962, and Gantenbein contemplated having the mansion destroyed. However, the community rallied around the famous site, and Portland residents donated $75,000 to help the city purchase and restore the old home. 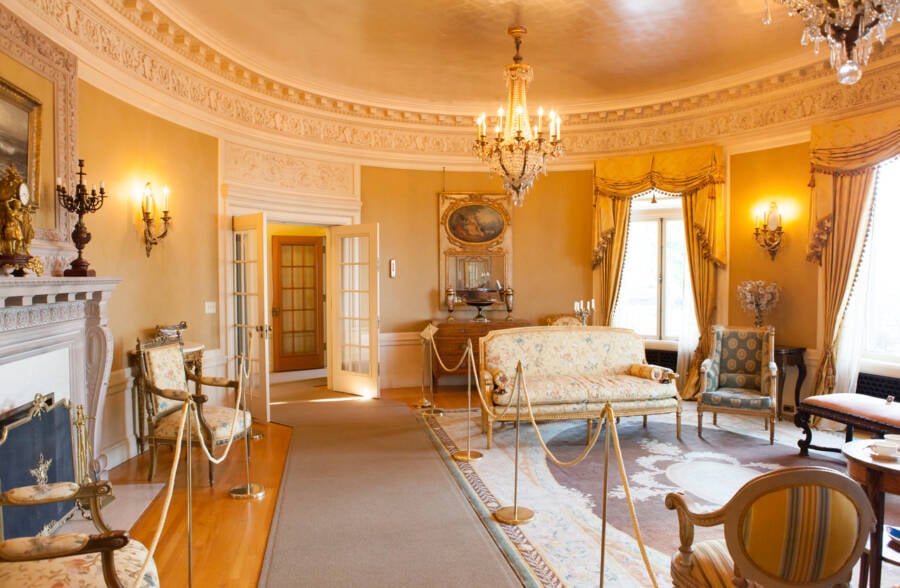 The City of Portland officially bought the Pittock Mansion in 1964, and a nonprofit was formed to take responsibility for the upkeep of the house. They spent just over a year repairing and restoring the mansion, and, in 1965, it reopened as the Pittock Mansion Museum. It is open daily to the public for touring.

And it is on these tours that many have claimed to encounter inexplicable experiences, perhaps with the late Pittocks themselves.

Perhaps it is because the Pittocks died before they could really use the home they designed that they still — allegedly — haunt it.

Visitors to the house have reported seeing windows shutting and latching on their own, the sounds of heavy footsteps, and a portrait of Henry Pittock moving around the house. Tour guides have reported encountering figures when they open the mansion for business in the mornings.

Some people say they have smelled the unmistakable scent of roses, Georgiana’s favorite flower. Apparitions of the couple, as well as the heads groundskeeper, have reportedly been seen and felt following visitors as they toured the mansion.

Indeed, the ghosts are allegedly friendly and gracious hosts. It seems that, although they were not alive long enough to enjoy the home they had built, the Pittocks are content to welcome guests to enjoy the beautiful views they couldn’t get enough of while still alive.

After learning about Pittock Mansion, check out another crazy haunted house, the Winchester Mystery House. Then, take a look at the terrifying “murder house” of H.H. Holmes.