Darrell Blatchley has recovered 61 whales and dolphins in the last 10 years, 57 of which have died from plastic pollution. Still, he's never seen such a horrific amount of plastic ingested by one whale. 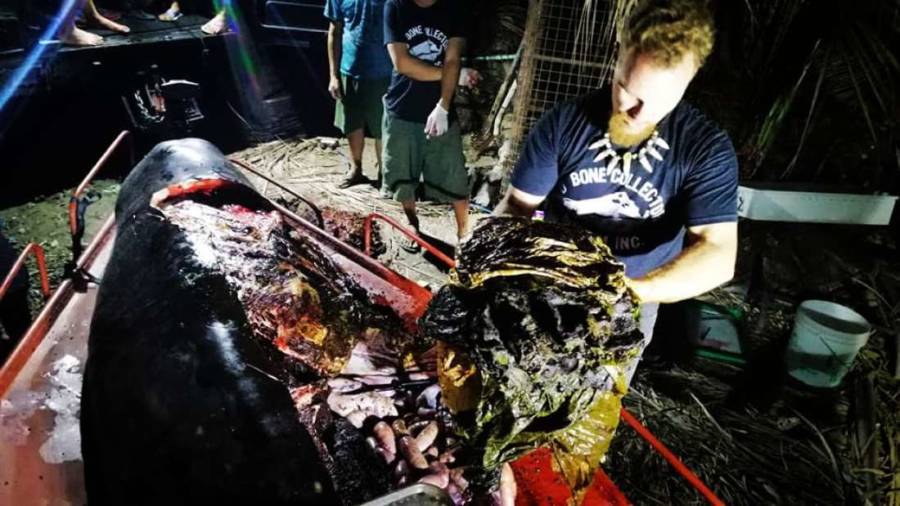 A whale with 88 pounds of plastic trash washed ashore in the town of Mabini in the Philippines on Saturday. According to The New York Times, the 1,100-pound whale had over 40 pounds of plastic bags in its stomach and a whole slew of other disposable plastic garbage.

While our environmental issues have caused countless instances of this kind, which have become quite frequent, the Mabini whale contained a particularly large amount of trash in its system.

The 15-foot marine mammal is yet another victim and reminder of the disconcerting amount of plastic in our oceans. Darrell Blatchley of the D’Bone Collector Museum in Davao City attended the subsequent necropsy and said it was the worst instance its kind he’d ever seen.

“I was not prepared for the amount of plastic,” he told CNN. “40 kilos roughly of rice sacks, grocery bags, banana plantation bags, and general plastic bags. Sixteen rice sacks total. It was so big, the plastic was beginning calcification.”

Ingesting plastic causes these marine mammals to experience a sense of fullness, while not providing any of the nutrients they need to survive. Whales lose weight and energy, and thus, aren’t able to swim as fast — which makes them easier prey.

Additionally, whales have no way of digesting this material or otherwise expelling it from their stomachs. Saturday’s troubling discovery has once again reminded the global community of how imperative it is to keep the ocean’s clean.

A 2015 study estimated that 5 to 13 million metric tons of plastic waste is dumped into the oceans every single year. As the third-biggest contributor of plastic to oceans behind China and Indonesia, the Philippines is particularly prone to seeing the consequences of this practice wash ashore.

According to the president and CEO of the World Wide Fund for Nature in the Philippines, Joel Palma, there’s no one identifiable cause for the Philippines’ exorbitant pollution through plastic — it’s merely been ingrained into everyday life.

Single-use plastics are inexpensive, recycling hasn’t been standardized, and a framework of local laws has only made changes to this culture difficult.

“We’re wasting a lot more than we should be,” he said. 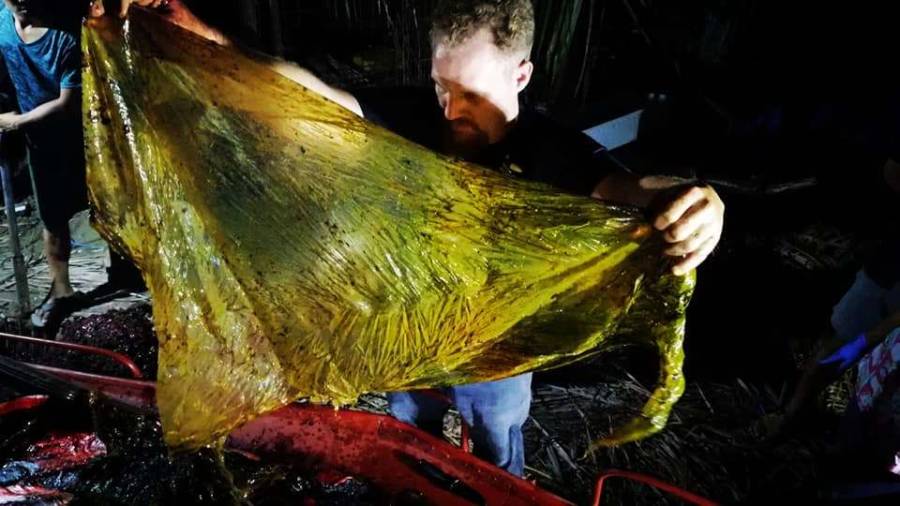 While plastic pollution certainly endangers hundreds of animal species other than whales, these marine mammals are among the most impacted. Quite simply, whales can and need to hold larger quantities of food in their bodies, and thereby bear the brunt of this environmental consequence.

In February, a whale in Spain washed ashore with 64 pounds of trash in its guts. June saw a beached whale in Thailand with 18 pounds of garbage in its system, while an Indonesian whale in November had 13 pounds of plastic in its body.

In the Philippines, the problem is so prevalent that even though there’s a sign near Blatchley’s museum that warns of a $190 fine for littering — far more than an entire month’s salary on the country’s minimum wage — the canal is still “a foot deep with plastic garbage.”

“Everybody acts like it’s somebody else’s problem,” he said.

Perhaps most affecting was Blatchley’s deep personal recollection of what he’s experienced regarding these issues in the last few years. Frustrated at the lack of the region’s efforts and tired of seeing the same problem lead to unnecessary death, he issued a stern warning to anyone who’d listen.

“The Philippine people are a proud people, sadly it’s not in being clean or taking care of the environment,” he said. “In the last 10 years, we have recovered 61 whales and dolphins, of which 57 have died due to fishing nets, dynamite fishing, and plastic garbage. Four were pregnant. This cannot continue. The Philippines needs to change from the children up or nothing will be left.”

After learning about the beached whale with 88 pounds of plastic trash in its stomach, read about the mystery sea creature that washed ashore in Indonesia and turned the water red. Then, have a look at some heartbreaking photos showing plastic’s devastating impact on our oceans.