Inside The True Story Of Pocahontas That Disney Didn’t Tell

A Native American woman who fostered peace between the Powhatan people and English settlers in the 1600s, Pocahontas paid dearly for her kindness.

Throughout history, countless stories have been told about Pocahontas, the brave daughter of a Native American chief.

In the 17th century, the English called Pocahontas a “noble savage,” praising her as a selfless heroine who had risked her life to save Captain John Smith. When she sat for the only portrait ever created during her lifetime, she wore European clothes, including a neck ruff that was popular at the time. 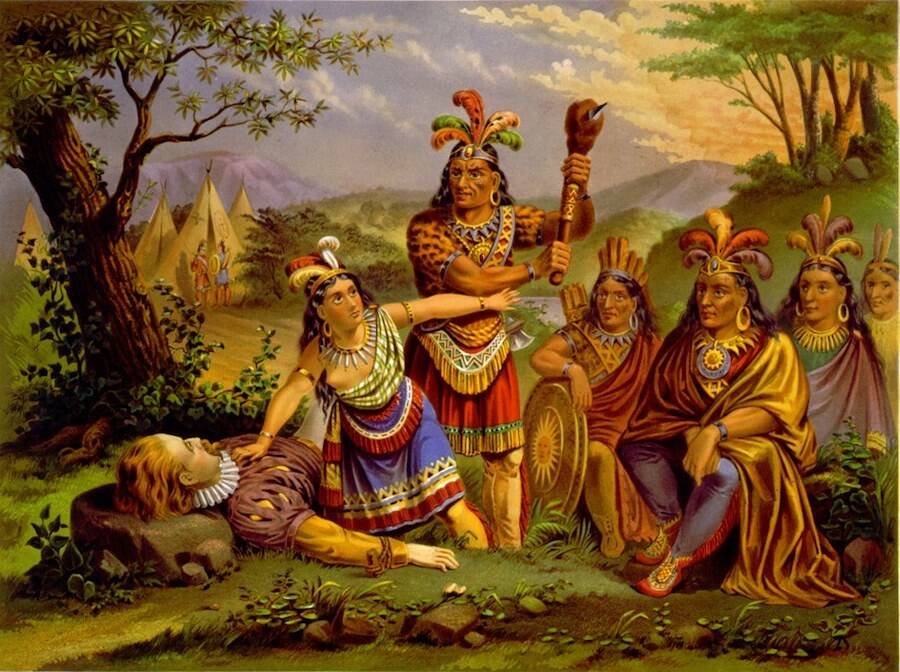 In the 19th century, painter John Gadsby Chapman created a famous artwork that depicted Pocahontas at her Christian baptism. And in the late 20th century, a blockbuster Disney film portrayed Pocahontas as a free-spirited Native American “princess” who was wise beyond her years.

The Early Life Of Pocahontas, Daughter Of Chief Powhatan

Born around 1596, Pocahontas was the favorite daughter of Chief Powhatan — the leader of the Powhatan tribal nation in modern-day Virginia. But interestingly enough, Pocahontas wasn’t actually her real name. Her name was Amonute, and she also had the more private name of Matoaka.

Pocahontas was simply a nickname for Matoaka that meant “playful one.” Her family probably couldn’t have guessed that this name would be the one that would stick with her for the latter half of her life.

Growing up, Pocahontas dressed like other Powhatan children, which meant wearing minimal clothing. At a young age, she shaved most of her head. Among her people, only adult women could grow their hair long. She also learned how to farm, cook, build baskets, and tend fires. 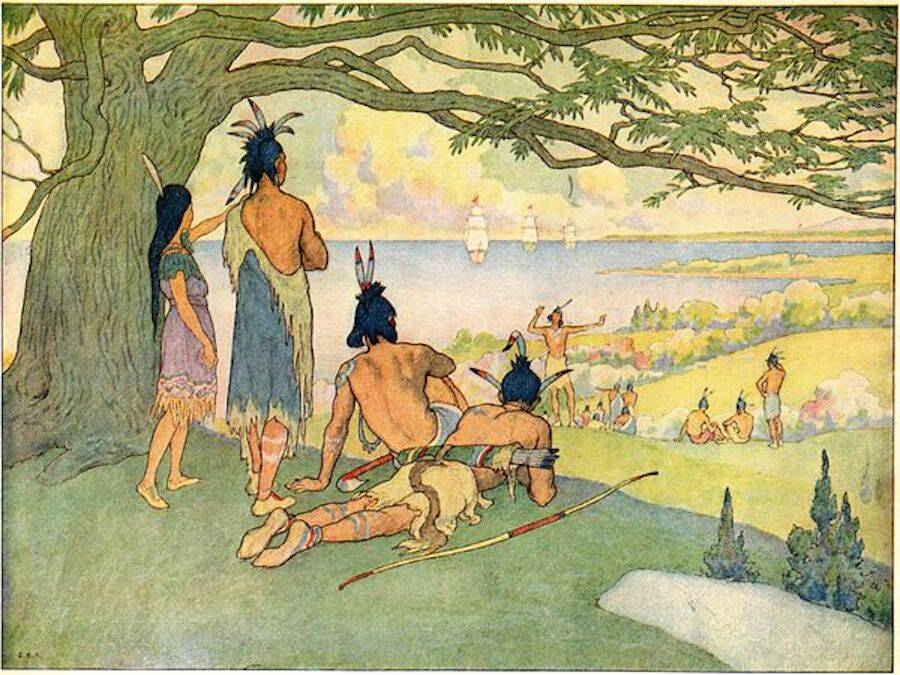 Elmer Boyd Smith/Wikimedia CommonsA 1906 depiction of the moment English ships appeared on the horizons of Virginia.

But life for the Powhatan would change forever in 1607 when about 100 English settlers landed in Virginia to establish Jamestown. One of these colonists was a man named Captain John Smith.

Though Smith is portrayed as Pocahontas’s love interest in the famous Disney movie, there’s no evidence of any real-life romance between the two of them. In fact, Pocahontas was just 11 years old when she met him.

Despite the fact that their real relationship differed greatly from the movie, Smith did portray Pocahontas in an extremely favorable light to the English. In fact, Smith’s tales of Pocahontas were the reason why she became famous. However, his stories may have been far from truthful.

The Fabled Story Of Pocahontas And The English Captain John Smith

In John Smith’s narrative — the story that made Pocahontas famous — the Powhatan tribe captured him and threatened to kill him. But then, the chief’s brave daughter intervened to save his life at the last moment.

“At the minute of my execution,” Smith wrote in 1616, “[Pocahontas] hazarded the beating out of her own brains to save mine; and not only that but so prevailed with her father, that I was safely conducted to Jamestown.”

But even Smith told this story inconsistently. In his 1608 account, Smith didn’t meet the chief’s daughter until months after he met other members of the tribal nation. Pocahontas only appeared as the heroine of the story years later, when Smith wrote to Queen Anne. And when he wrote his book, Smith transformed the brief tale into something even more dramatic. 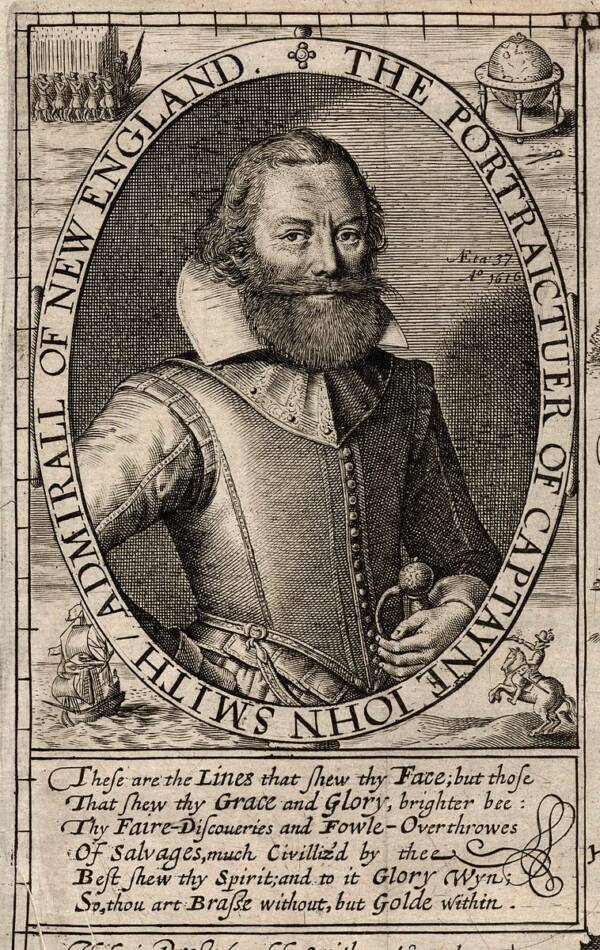 Unknown/Houghton LibraryAn engraving of John Smith from his 1624 book, where he wrote about Pocahontas saving his life.

Yet the oral traditions passed down by the Powhatan tell a different story.

According to the oral history, the Powhatan never tried to execute John Smith. Instead, they performed a tribal ritual to formalize Smith’s place among the Powhatan. A symbolic death and rebirth transformed Smith into a chief. And after that day, Chief Powhatan referred to Smith as his son.

As for the relationship between Pocahontas and Smith, evidence shows that the chief’s daughter befriended Smith and brought supplies to the starving Jamestown settlers. In 1609, Smith returned to England for medical care — but Pocahontas and her family were told by the settlers that he was dead.

The Kidnapping And Captivity Of Pocahontas

The major event of Pocahontas’s life was not saving John Smith. Instead, it was her kidnapping — which was done by Smith’s fellow colonists.

By 1613, Pocahontas was a wife. She had married a warrior named Kocoum — with whom she may have had a child. But she was also still known as the chief’s favorite daughter. Tragically, Pocahontas became a bargaining chip for the English in the midst of their conflict with the Powhatan. Captain Samuel Argall plotted to kidnap Pocahontas and hold her for ransom. 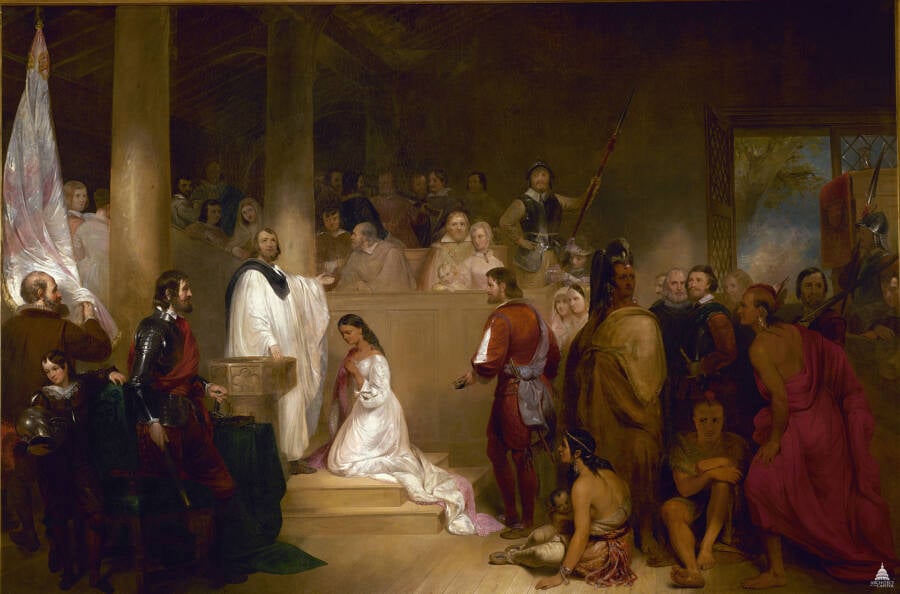 John Gadsby Chapman/U.S. CapitolThe famous painting of Pocahontas’s baptism leaves out the fact that she was held captive beforehand.

Argall carried out his plan. He tricked Pocahontas into visiting his ship and refused to let her leave. For about a year, Pocahontas was a prisoner of the English. And even though Pocahontas’s father soon agreed to the settlers’ demands, his daughter still remained a captive.

In captivity, Pocahontas learned about the beliefs and practices of the English people. She also learned their language. By 1614, she had converted to Christianity and taken the name Rebecca. And later that year, she married a settler named John Rolfe. (What happened to Kocoum remains unknown, but he may have been killed, or he may have simply divorced his wife.)

While Pocahontas was being held prisoner, most English accounts claim that she was treated well by her captors. But tribal oral traditions tell a different story — a far more disturbing version of her transformation.

The Woman Derided As A ‘Noble Savage’ Visits England

The English treated Pocahontas’s marriage and conversion as a victory. The Virginia Company of London, which had funded the settling of Jamestown, used “Rebecca Rolfe” to encourage more settlers to travel to Virginia.

But the Powhatan saw the kidnapping in very different terms. According to oral traditions, Pocahontas suffered a mental breakdown and even told her sister that she had been raped while in captivity. And she only went along with the marriage and conversion because she had little choice.

At some point, Pocahontas gave birth to a son, Thomas Rolfe. While most English accounts state that Pocahontas had her son after marrying John Rolfe, the Powhatan oral history says that she had him before the wedding. 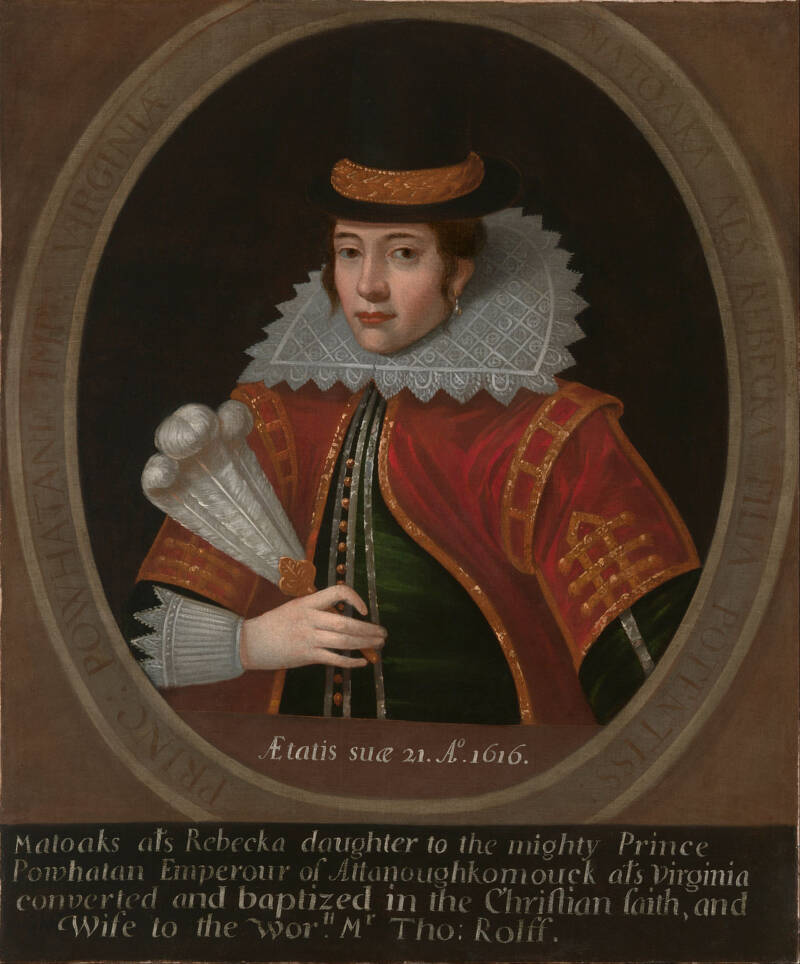 Unknown/Wikimedia CommonsA colorized image of “Princess” Matoaka, based on the only portrait she posed for in life.

In 1616, Pocahontas and John Rolfe crossed the Atlantic and met with the king and queen of England. The trip was meant to show off Pocahontas as a “tamed savage.” Though she was not considered a princess in Powhatan culture, she was presented as the “princess” Matoaka to the English.

On that trip, she also saw John Smith for the first time in several years. During their brief meeting, Pocahontas reprimanded Smith for the way he had treated the Powhatan people. She also told him that her father, Chief Powhatan, had said of the English, “your countrymen will lie much.”

During her journey back to Virginia, Pocahontas suddenly fell violently ill and died soon afterward. She was only about 21 years old at the time of her death. And to this day, it’s still unclear what killed her.

While some think that she came down with a disease like tuberculosis, pneumonia, or smallpox, the Powhatan oral history has suggested that she may have been poisoned — especially since her death was so sudden.

The Real Pocahontas Story That Doesn’t Always Get Told

What’s true and what’s false in the story of Pocahontas? Four centuries later, it’s easier to call out fiction — there was no great love story between the chief’s daughter and the English captain — than it is to find the truth.

Yet the fictional version of Pocahontas is largely why we know her name today. Historian Camilla Townsend argues that the story of Pocahontas endured for so long because it flattered white settlers.

“I think the reason it’s been so popular — not among Native Americans, but among people of the dominant culture — is that it’s very flattering to us,” Townsend told Smithsonian Magazine. “The idea is that this is a ‘good Indian.’ She admires the white man, admires Christianity, admires the culture, wants to have peace with these people, is willing to live with these people rather than her own people, marry him rather than one of her own.”

But that narrative twists and distorts reality.

Pocahontas did not choose Jamestown over the Powhatan. That choice was taken from her. She became little more than a symbol of “the good Indian” for John Smith, the Virginia Company of London, and English settlers.

The story of Pocahontas may have shown that peace was possible — but it also showed that this peace very quickly disintegrated and then almost completely vanished shortly after Pocahontas’s death.

Centuries of stories have tried to define the chief’s daughter. But Pocahontas would not recognize the fictional character she’s become today.

Who was the real Matoaka? What happened to her first husband? And how did she really feel about her marriage to a settler, her conversion to Christianity, and her trip to England? We may never know the full story. Still, by separating fact from fiction, we can honor Pocahontas’s place in history.

After learning the real story of Pocahontas, read about the starving time in Jamestown where settlers engaged in mass cannibalism. Then, take a look at the lost colony of Roanoke Island.