While beautiful, the Portuguese man of war packs a powerful venom that could give you severe muscle pain, make you vomit, or even kill you.

If you’re ever swimming at the beach and you feel an extremely sharp sting in your leg, take a look around in the water. If you see a swarm of small, translucent-blue blobs floating on the water, we’ve got bad news for you.

You just met a Portuguese man of war, and the pain is about to get much worse.

The Portuguese Man Of War’s Venom

The pain from a Portuguese man of war sting is described as an intense burning sensation that will cause you to scream in bloody agony. The distress may last anywhere from 20 minutes to 24 hours, and even afterward, the skin will itch like hell. In addition to severe muscle pain, you may experience a fever, nausea, and vomiting.

Fortunately, the Portuguese man of war, which are named for the small, agile wooden sailing vessels prominent during the Golden Age of world exploration, rarely kill humans.

However, these creatures are deadly to small fish, shellfish and other invertebrates. As the video shows, any small fish that come in contact with the long, stinging tentacles become paralyzed due to the thousands of venom-injecting nodules. After the tentacles paralyze the fish, stronger and thicker ones spring into action, drawing the fish closer to the bottom of the clear sac that floats on the water. Over several hours, digestive enzymes liquefy the fish, leaving behind only the scaly skin and bones.

This terrifying feeding system spells doom for their prey. Portuguese man of war need strong venom, proliferated through thousands of stingers along tentacles that can reach 100 feet long, to instantly paralyze their prey.

If the venom doesn’t do its job, Portuguese man of war could become injured or eaten as it also acts as a defensive mechanism. Sea turtles and ocean sunfish consider them as snacks as they have special bodies that protect themselves from stinging tentacles.

These beautiful creatures’ graceful, purplish tentacles trail behind their main bodies and usually reach 30 feet in length. The purplish or blue bodies that sit on the water grow to about six inches tall when fully mature.

The clear bladder that floats on the water looks like a piece of crystal or a tiny sailing ship that whips in the wind, which is why these jellyfish-like animals share a name with fast sailing ships.

The Portuguese man of war is actually four intertwined creatures working in concert with each other and can’t survive in the water separately. They aren’t exactly jellyfish, but they act like a jellyfish in terms of habitat and feeding habit, spending their lives adrift on the ocean surface at the whim of currents and surface winds.

These jellyfish-like creatures live in the mainly tropical waters of the Atlantic and Pacific Oceans but can move north if conditions are right. They’re quite common, predatory, and live near the top of the food chain.

There is no overall estimate of how many people receive stings from these sea creatures every year. However, more than 200 vacationers in south Florida were stung in one day in February 2018. As more people head to the water and more of these creatures come near shore, more attacks may happen in the future. 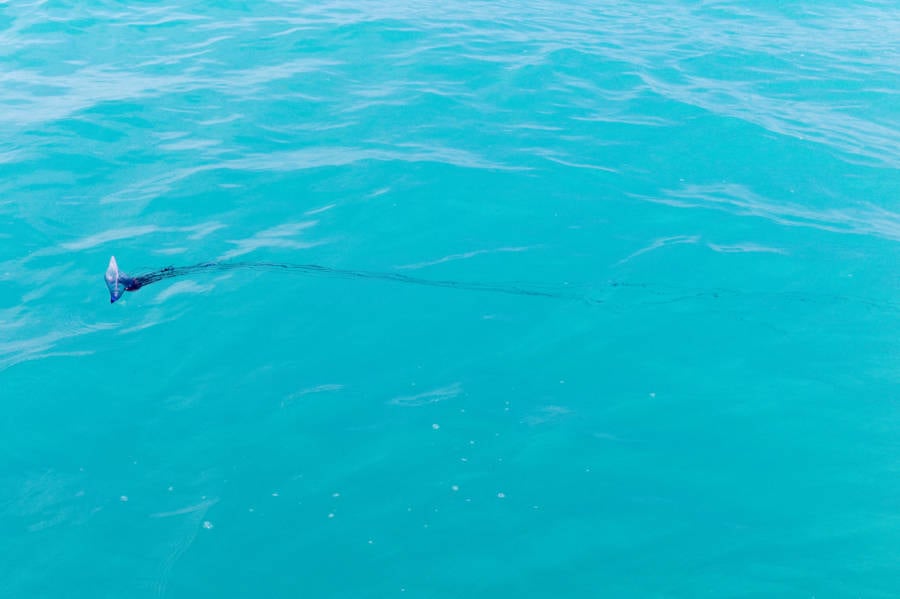 If people have underlying health issues, a sting from a Portuguese man of war may have a different outcome. Humans might feel chest pain, difficulty breathing, and even death.

In January 2012, a 58-year-old South African man named Roland Singh, who was swimming in warm waters with his granddaughter, died after coming in contact with a swarm of Portuguese man of war.

“While the sting in itself does not cause any major effects in the human body, a sensitive individual who is prone to allergies can have an extreme reaction to the toxins in the blue bottle’s venom. An allergic reaction can lead to fever, heart and lung failure and may even lead to death, even though it is extremely rare,” said the emergency medical personnel in Cape Town. 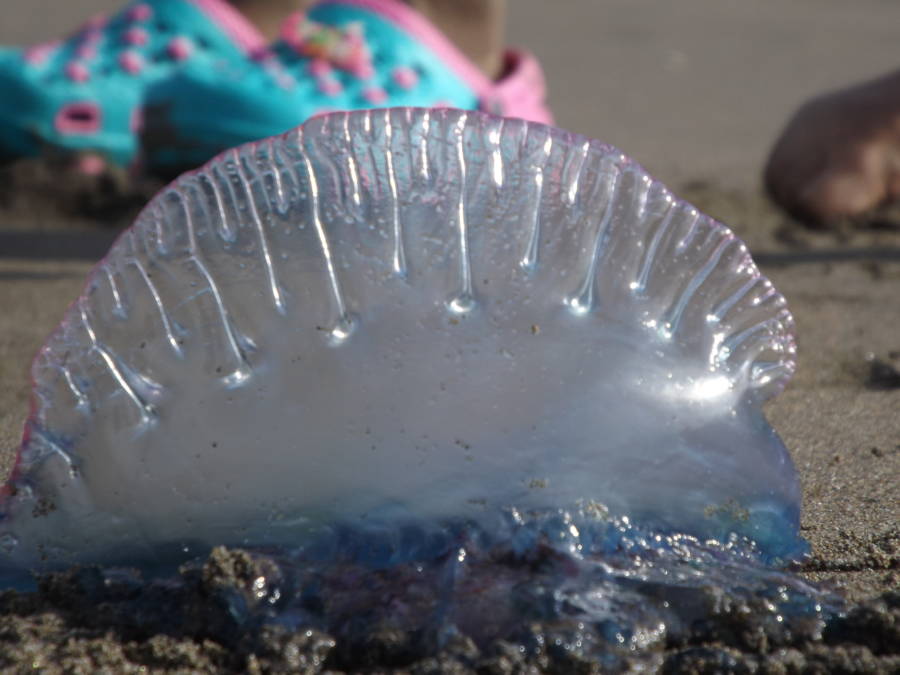 Flickr.com/Vicky Ponce It looks beautiful, but do not get too close.

In 2010, Maria Furcas, 69, died after swimming in infested waters off the coast of Sardinia, Italy.

“The lady came out of the water dragging her leg and screaming she had been stung by a jellyfish. There was a very vivid red mark on her right leg. Then she collapsed to the ground and a lifeguard and other people on the beach rushed to help her. … She died on the sand in front of dozens of people,” said an eyewitness.

Experts believe Furcas’ death was a first for the Mediterranean region of Europe.

Deaths like these are what close beaches to vacationers. In May of 2018, several popular beaches in southeastern Spain closed during the peak of holiday season because a swarm of Portuguese man of war infiltrated coastal areas. The same thing happened in Charleston, S.C.

City leaders warned beachgoers to watch out for these creatures, and authorities believe more of them might make their way to beaches for several weeks. Back in 2015, people sighted these jellyfish-like animals by the dozens washing up on beaches of North Carolina. 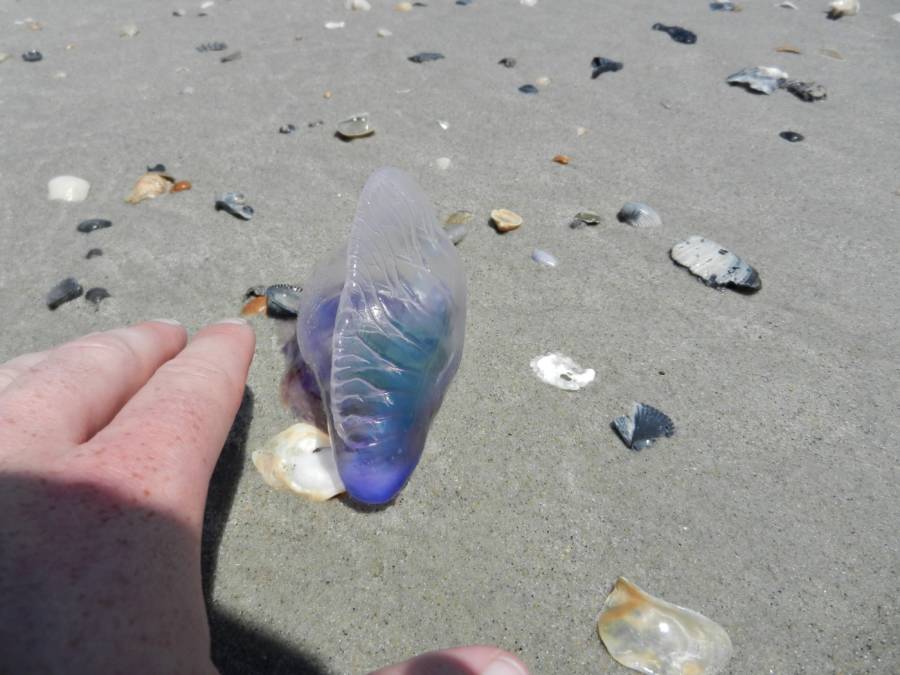 Flickr.com/Travis Here’s what one looks like next to a human hand for a size comparison.

Experts there warned, “They can’t be rescued. Once it’s up onshore, it’s going to be damaged, it will die. Even though it’s dead on the beach, you can still get stung.”

A Portuguese man of war can still sting you even after lying dead on a beach for weeks. 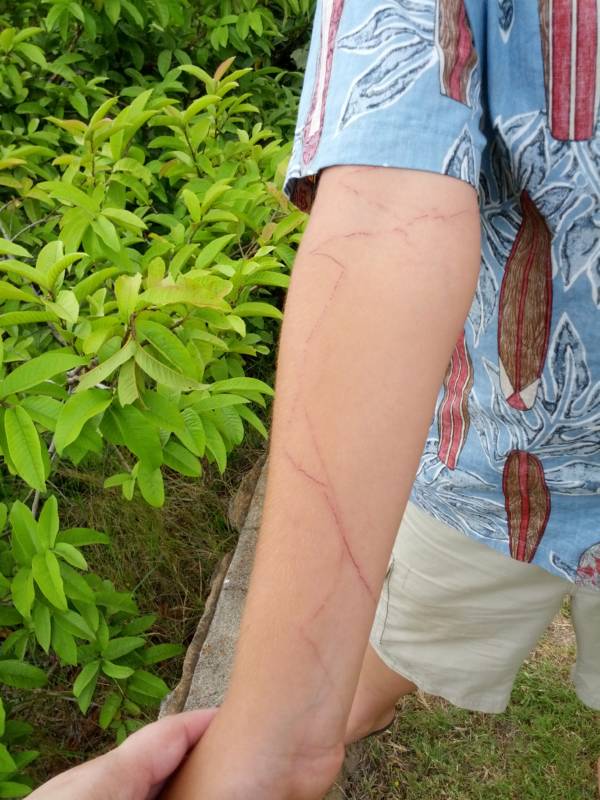 Flickr.com/ulalume This young man spent an afternoon swimming at the beach in Hawaii. He has the battle scars to prove it.

If you are stung, medical experts advise rinsing the area with vinegar to remove any stingers left on your skin. Then, immerse the area in hot water, around 113 degrees Fahrenheit, for around 45 minutes. You can substitute a hot pack for hot water. Although, the best defense against a Portuguese man of war sting is to avoid them altogether, which means paying attention to local beach conditions ahead of taking dip.

Unless you’re a turtle or a huge sunfish, try to avoid Portuguese man of as much as possible. Their stings belie a simple beauty that lead to horrible pain, or in extreme cases, death.

Next, learn why why the cone snail is one of the ocean’s deadliest creatures. Then read these 10 amazing facts about ocean animals.