A baby bird from the Cretaceous period has been preserved for tens of millions of years. 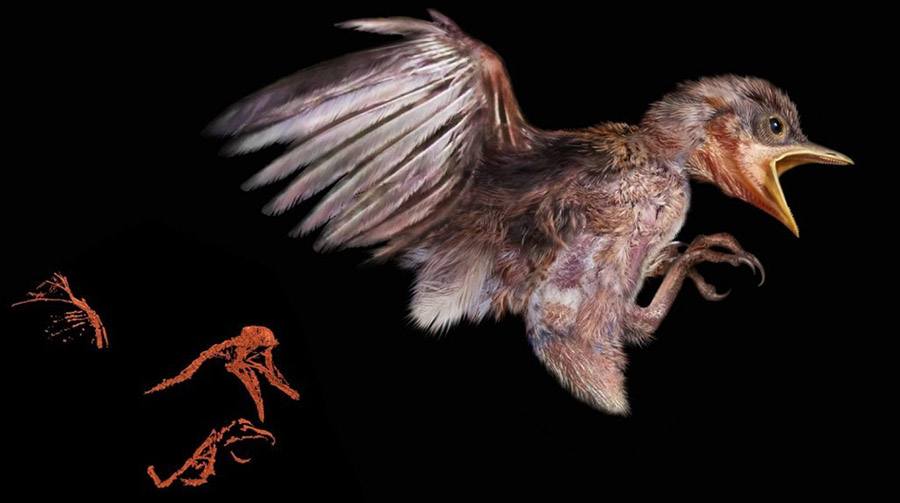 A rendering of the bird.

While we may not have the technology to time travel just yet, some natural substances have the ability to transport us millions of years into the past.

That is the case with a sample of amber that scientists recently discovered in Burma. In the amber, which scientists believe to be 99 million years old, the researchers discovered the fossil of a bird which was believed to have gone extinct approximately 65 million years ago.

This wasn’t just any fossil, though; according to the paper the scientists published in Gondwana Research, it is the “most complete” fossil of a baby bird to be recovered from the Cretaceous period.

The fossil of the bird, a kind of enantiornithean, had feathers, claws, skin, and tissue around the eyelid, and the researchers hope that the fossil can provide more detail on this prehistoric bird.

“The plumage preserves an unusual combination of [developed] and [undeveloped] features unlike any living hatchling bird,” the authors wrote in the paper.

According to the researchers, the bird likely died quite young by falling into sap, which over time became the amber they uncovered nearly 100 million years later in Burma.

A few CT scans and X-rays later, researchers at the Royal Saskatchewan Museum of Canada discovered that the fossil’s wings had feathers similar to modern birds. Unlike modern birds, according to paleontologist Ryan McKellar, the fossil’s tail and legs were covered in “dino fuzz.”

Next, see what the very first animal on Earth was.