While in prison for avenging her husband in broad daylight, Pupetta Maresca transformed into a sort of Godmother. By the time she was released, she became a full-fledged criminal queen.

Most Mafia movies, from The Godfather to Gomorrah, feature hyper-macho men in lead roles. But in real life, organized crime rings also contained lady bosses worthy of any fictional Michael Corleone or real-life John Gotti. Back in 1950s Italy, one woman named Pupetta Maresca earned her stripes as a Camorra boss by killing the man who assassinated her own husband.

Pupetta Maresca, Daughter Of The Mob

Assunta Maresca, a beauty to be sure, was also always a firecracker. She was born in 1935 to a fearsome Italian family in the town of Castellammare di Stabia near Naples, not to be confused with the Sicilian hometown of American mafioso Salvatore Maranzano.

Castellammare di Stabia has long been a hotbed of the Neapolitan Camorra criminal organization. The Camorra, or Italian mafia, still runs the streets of Naples today, even targeting journalist Roberto Saviano when he revealed their secrets. 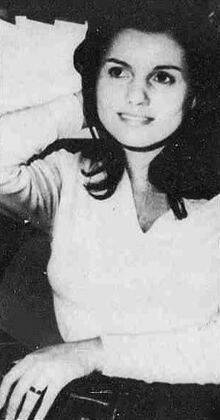 Wikimedia CommonsBeauty queen Assunta Maresca was as fearsome as she was lovely.

Things weren’t all that different back in the days of Assunta Maresca. Dubbed “Pupetta,” or “little doll,” for her good looks, Assunta hailed from a criminal clan herself. Her dad was Vincenzo Maresca, a leading local boss, and so she grew up in a family that regularly committed felonies and his family openly celebrated once a year the day he escaped from prison.

Her family was called the “Lightning-Quick,” the “Lampitelli,” for their lightning-quick knife skills. The young Maresca wasn’t an exception. She was once even accused of drawing a knife on a classmate as a young girl. This reputation didn’t keep Pupetta Maresca from dwelling in the spotlight. At 19, she won a local beauty pageant and caught the attention of the man who would seal her fate — Pasquale Simonetti, also known as “Big Pasquale from Nola,” a town near Naples.

A hulk of a man, Simonetti fixed the prices of fruits and veggies in the local market and was reported to smuggle goods in and out of town.

He wasn’t a bigwig like Maresca Senior, but the match was made. Simonetti went off to jail for a brief time, but once he got out, the camorrista wed the mob princess. The wedding was a big, splashy celebration, but alas, the couple’s happiness didn’t last. 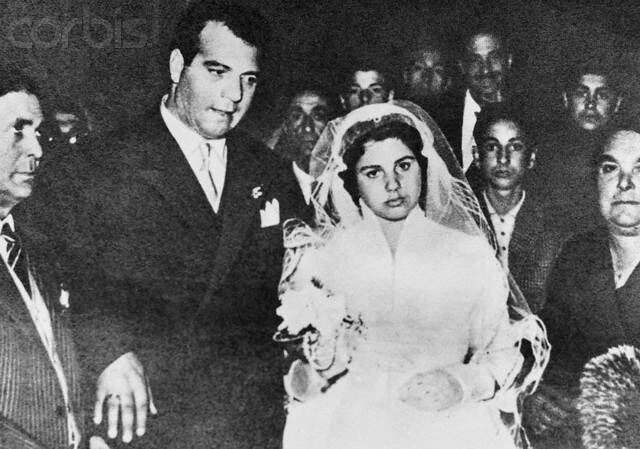 Image by © Bettmann/CORBISThe wedding of Pupetta Maresca and Pasquale Simonetti.

Soon after her wedding, Maresca became pregnant. But Simonetti’s professional troubles came back to haunt him, as mob business is wont to do. As Maresca would later recall to the court, her husband was mockingly called “the president of potato prices” and in response, Simonetti angered some local toughs, including a man named Antonio Esposito, who was also a former partner.

In 1955, Esposito hired a hitman to kill his rival, and bada-bing, bada-boom, Simonetti was dead.

His young widow, carrying their first child, was distraught. But she handled her grief with violence. According to her court statements, Esposito had begun to threaten her as well and so she had no choice but to take her protection into her own hands. Deciding the cops were ineffectual, she enlisted her younger brother to help her take down the man who threatened and destroyed her life as she knew it.

Wikimedia CommonsMaresca shot who she believed to be her husband’s killer 29 times in broad daylight.

When Esposito reportedly showed up at Pasquale’s gravesite, Maresca took vengeance into her own hands. She and her brother Ciro tracked down the man down and with both hands on the gun, Maresca fired 29 shots into Esposito’s body in broad daylight.

Pupetta Maresca became an immediate media sensation during her 1959 trial. The young beauty captivated the public imagination and earned herself the moniker of the “diva of crime.”

She also painted a sympathetic portrait of herself — she was heavily pregnant when she committed the murder after all — and declared that she was just getting justice for her late husband. She even publicly stated that she wasn’t repentant, claiming she’d kill Esposito all over again.

“I killed for love but also because they wanted to kill me!” Maresca told the court. “And if my husband came back to life and they killed him again, I would do the same thing.” The court erupted in applause and Maresca became an instant celebrity as she went off to prison.

Meanwhile, Maresca gave birth. The boy was named Pasqualino (or “Little Pasquale”), after her late husband. The jury ultimately didn’t buy her excuse of self-defense. The new mother and mafia widow received 14 years in jail.

Though she received a decade and a half in jail, Pupetta Maresca only served a few years. While in the slammer, though, she received regal treatment as a “woman of honor” which meant she got the best bed sheets for her cot and could even advocate for other prisoners, much like a godfather and his clients.

“She was a very charismatic woman,” one prisoner said of her.

She raised her son inside for a few years until her mother took him home with her. However, she never stopped working for the Camorra, and indeed the press dubbed her “Madame Camorra” or “the Camorra widow.” Glamorous beauty Pupetta was even serenaded in song. She also starred in a 1960s flick loosely based on her own travails.

Not long after she got out of jail, she linked up with another Camorra criminal, this time a man named Umberto Ammaturo. A gun and drugs runner, Ammaturo was dangerous business. But he treated her like a lady of luxury in the beginning, and the two became literal partners in crime, even having twins together.

Ammaturo was perhaps every bit as bad, if not worse, than Maresca’s late husband. In his seminal book Blood Brotherhoods: A History of Italy’s Three Mafias, historian of Italian culture John Dickie wrote:

“Pupetta’s consort, Umberto Ammaturo, was one of the most aggressive members of the NF [Nuova Famiglia, an offshoot of the Camorra]. Near Christmas in 1981, he planted a bomb outside [rival mobster Raffaele] Cutolo’s Ottaviano palace as a provocation. He would later confess to being the man behind the murder of criminal psychiatrist Aldo Semerari, whose beheaded corpse was also found near Cutolo’s palace on April Fool’s Day 1982.”

But again, this marital bliss was not to last for Maresca.

In 1974, Pasqualino, Maresca’s son, was ambushed and murdered. Maresca suspected her husband Ammaturo, who she claimed

“I always thought that Pasqualino annoyed him, he was too much like his father.” Maresca said. “I think that if he’d [Ammaturo] confessed the murder to me I would have killed again, without hesitation.”

But no concrete evidence of Ammaturo’s culpability emerged and he was eventually officially cleared of any involvement. Maresca stayed with her man despite rumors that he violently abused her — until 1982. That year, a violent war had broken out between families of the mob. Murder was rampant. Maresca held a very public press conference to threaten a rival mafioso and explain the dire state of affairs in the mob.

“Justice and I have never been great friends,” Maresca told all the local media outlets. “You know, justice has always punished me more harshly than I’ve deserved. The other day, I overheard a carabiniere in my town say, ‘They’ve killed one of ours’ when talking about one of [their] clan. Tell me, where is the justice in that?”

The cops, in turn, formally accused Maresca and Ammaturo of the murder of the aforementioned Dr. Semerari.

While her lover escaped prison, Pupetta did more hard time — four years, to be exact. She was eventually released due to insufficient evidence and still lives in Sorrento, Italy, albeit under the radar now.

The pop-culture phenom and beauty queen-turned-boss has been immortalized in several films based on her life. Perhaps most infamous is the 1982 made-for-TV movie Il caso Pupetta Maresca. A 2013 TV drama, Pupetta: Il coraggio e la passione, received criticism from anti-Mob activists.

Tonino Palmese noted, “If they [the makers of the program) really wanted to celebrate a female figure, we have a few suggestions. I’m thinking of Matilde Sorrentino and Teresa Buonocuore — honest, simple and respectful women who were savagely killed. These are real stories from yesterday, not the 1950s. But it’s not Signora Maresca who’s to blame for this series — it’s the producers who prefer money and commercial success to ethical responsibility.”

Love criminal queens? Check out how Irish pirate princess Grace O’Malley dominated the seas. Then, learn all about the American Mafia in the 1980s.