R. Budd Dwyer And The Death Of An “Honest Man” 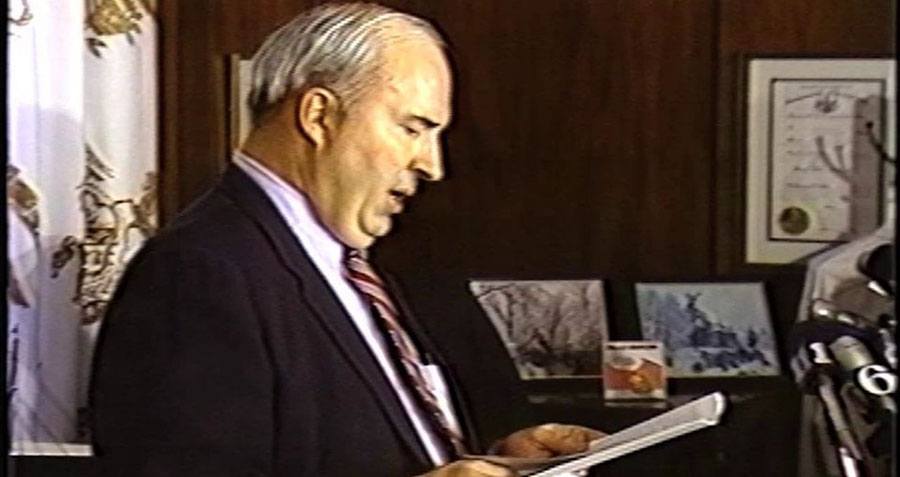 After meeting with two staffers on January 22 in order to weigh his options, alone in his home with his thoughts, R. Budd Dwyer contemplated his future. He scribbled his thoughts on a piece of paper, found later by his family.

“I enjoy being with Jo so much, the next 20 years or so would have been wonderful. Tomorrow is going to be so difficult and I hope I can go through with it.”

The press conference in Harrisburg the next morning began with a prepared statement that left no one with any idea they were about to watch R. Budd Dwyer’s suicide.

But as Dwyer reached the final page, he went off script, telling the audience:

“I’ve repeatedly said that I’m not going to resign as State Treasurer. After many hours of thought and meditation I’ve made a decision that should not be an example to anyone because it is unique to my situation. Last May I told you that after the trial, I would give you the story of the decade. To those of you who are shallow, the events of this morning will be that story. But to those of you with depth and concern the real story will be what I hope and pray results from this morning–in the coming months and years[,] the development of a true Justice System here in the United States.

I am going to die in office in an effort to ‘…see if the shame[-ful] facts, spread out in all their shame, will not burn through our civic shamelessness and set fire to American pride.’ Please tell my story on every radio and television station and in every newspaper and magazine in the U.S.. Please leave immediately if you have a weak stomach or mind since I don’t want to cause physical or mental distress. Joanne, Rob, DeeDee [sic] – I love you! Thank you for making my life so happy. Goodbye to you all on the count of 3. Please make sure that the sacrifice of my life is not in vain.”

In front of the gathered reporters and television cameras, he removed an envelope from under the podium. Inside was a .357 Magnum revolver. The crowd immediately began to panic as the former treasurer announced, “Please leave the room if this will affect you.”

Frederick L. Cusick, a journalist and friend of Dwyer’s who was sitting in the front row to cover the story, told the Los Angeles Times years later that he “should have run and grabbed him when he pulled out the envelope. I knew that was it.”

As people frantically yelled for him to stop and others approached the podium to disarm him, R. Budd Dwyer quickly inserted the gun into his mouth, pulled the trigger, and fell to the floor. He died instantly.