In one member's own words, the Rainbow Family is "the largest best coordinated nonpolitical nondenominational nonorganization of like-minded individuals on the planet." 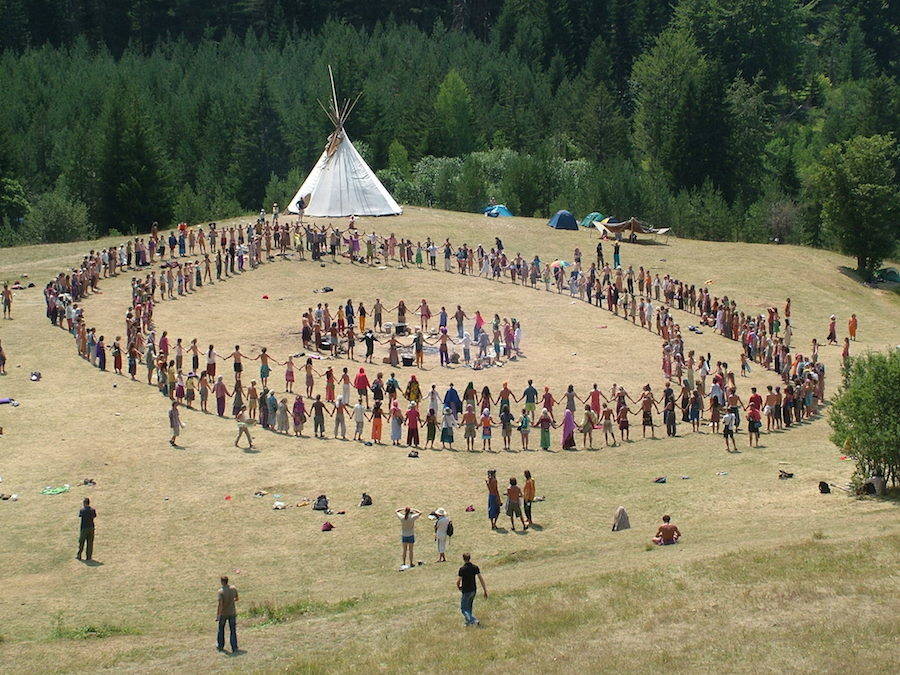 Their full name is the Rainbow Family of Living Light, but you can just call them the Rainbow Family. Around since the early 1970s, this counter-culture group was heavily inspired by the famous 1969 Woodstock Festival as well as the anti-war, pro-love movements.

Unlike many of the hippie groups that saturated the 1960s before fading away, the Rainbow Family lives on, holding annual Rainbow Gatherings. Unfortunately, it’s not all peace and love.

The Rainbow Family’s Origins And Principles 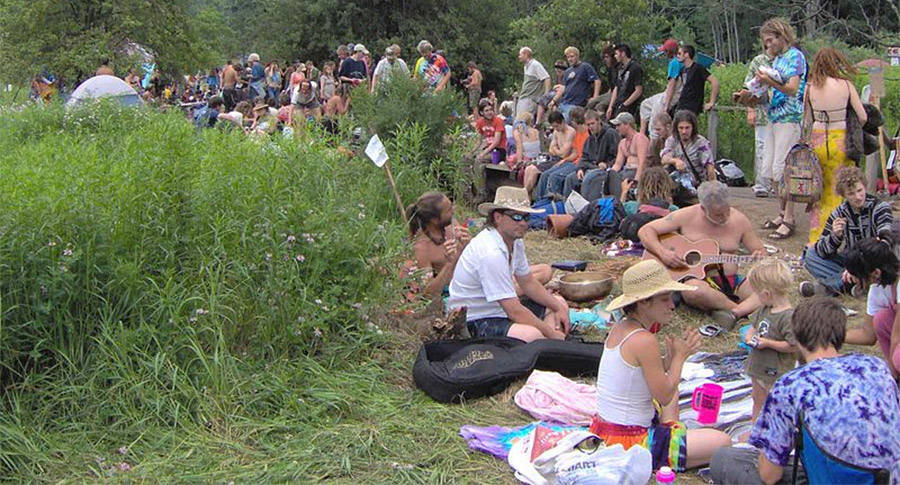 Though the Rainbow Family boasts that it has no leader, there were two men largely credited for starting it. Barry Plunker and Garrick Beck were in their late 20s when they had a prophetic vision.

After attending another music festival in Portland, Oregon called Vortex I in August of 1970, they decided that all the small communes, nomadic groups, and stray hippies could merge together. Their goal was to create, as one later member described it, “the largest best coordinated nonpolitical nondenominational nonorganization of like-minded individuals on the planet.”

Plunker, who had previously lived in a commune on Haight Street in San Francisco, used various Eastern and Western philosophies to attract members to the Rainbow Family. For instance, he’d mention Tao or the Book of Revelation, quoting sections like “And I will give power unto my two witnesses, and they shall prophesy a thousand two hundred and three-score days, clothed in sackcloth.” He’d even use Native American folklore to say that the Rainbow Family was, in a way, a reincarnation of dead warriors reclaiming the earth.

Plunker and Garrick, who called themselves prophets, peddled leaflets and newsletters around. Eventually, after enough members joined, they set up a community of about 40 tribespeople just outside Eugene, Oregon and became a legal corporation.

Once the Rainbow Family of Living Light was established, the next step was to put together a gathering. 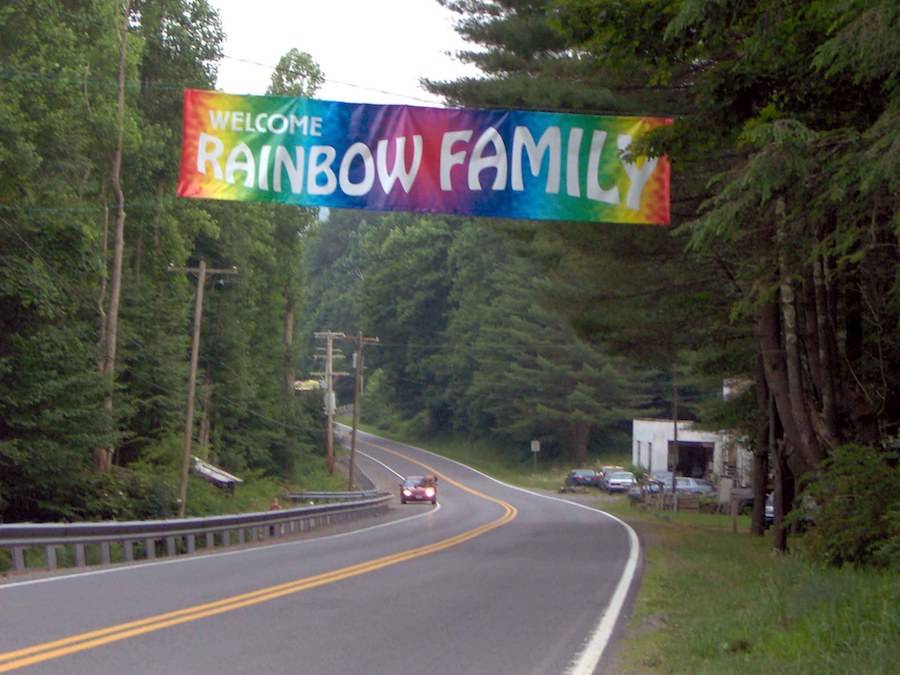 Since the foundation of the Rainbow Family included no formalized membership or officials leaders of any kind, anybody was invited to what would become known as Rainbow Gatherings. Of course, to have the Rainbow Gatherings, there would have to be a space to accommodate all the like-minded individuals.

The first official Rainbow Gathering was held in Granby, Colorado in 1972 at Strawbery Lake. However, it almost didn’t happen. A Rolling Stone article with the headline “Acid Crawlback Fest: Armageddon Postponed” and published Aug. 3, 1972 read:

“By the middle of May, all 800 or so people in Granby expected to be overrun – by an estimated one million fanatic Christ and dope addicts coming to a blasphemous festival at Table Mountain, right smack in the middle of their park.”

A court order was issued against the Rainbow Gathering at its initial location, but a local developer named Paul Geisendorfer offered the group his nearby site at Strawberry Lake.

While the gatherings are meant to represent peace, with music, dancing, and love, they have continuously been met with controversy.

Initially, the participants were meant to get together and pray or meditate for world peace. Costs were covered by donations and days were spent going to workshops, sitting in women’s circles or drum circles, going for walks, and practicing yoga or tantra. Of course, attendees would also smoke marijuana and dabble with psychedelic drugs.

The group’s values claimed to be noble, aimed at creating a better society and contributing to world peace. But they’ve often been criticized as most participants’ values lie in hanging out in the woods and getting free drugs.

The Rainbow Family has also been scrutinized for not properly cleaning up after their gatherings. They’ve received complaints by the Forest Service and public officials for leaving garbage behind, thus leaving a detrimental impact on the environment and large costs to local governments.

Disputes with locals have been a repetitive problem as well. In the most serious incident, two women were murdered at a Rainbow Gathering at Monongahela National Forest in West Virginia in 1980 after there had been brewing tension between the Rainbow Family and the locals.

Police believed that the women were shot to death by a group of local men, one of whom was convicted though later exonerated. A serial killer, Joseph Paul Franklin, then admitted to killing the women, but later said he had actually just read about the murders. As of now, the killers have not been caught and an upcoming documentary titled The Rainbow Murders explores the incident and the Rainbow Gathering at which it happened.

Where The Rainbow Family Is Now

Despite the controversies, the Rainbow Family still exists and the Rainbow Gatherings still happen. Each year, an estimated 8,000 to 20,000 people attend the gathering held typically at national forests.

Rob Savoye, a “Rainbow” who has been attending the gatherings for over 30 years said, “People are tolerant, accepting of different stuff” and that “A lot of us have had rough family lives, and the Rainbow has sort of filled that void for us.”

However, Savoye also said that the general vibe of the group has changed over the years, with heavier drug use and incidents of violence. “A lot of these kids end up hanging out more in town and causing trouble with the locals. It’s an embarrassment,” he said.

The Rainbow Family has no official website, making it difficult to keep track of any official numbers in regards to the increase or decline or participants.

If you found this article on the Rainbow Family and Rainbow Gatherings interesting, you may also be interested in these vintage hippie photos. Then take a look at these Woodstock photos from the summer of love.