"It illuminated the entire forest with a white light. The object itself had pulsing red light on top and a bank of blue lights underneath. The object was hovering or on legs." 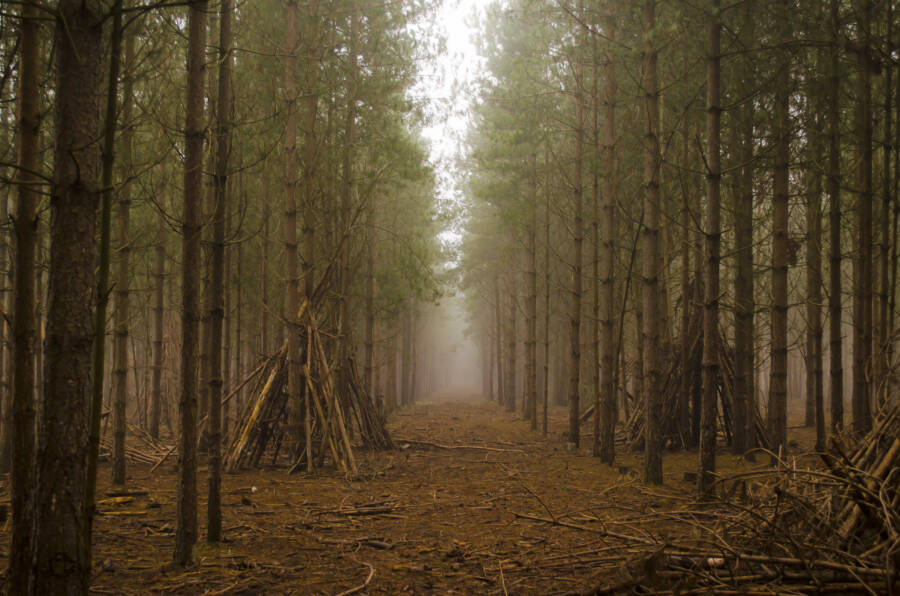 The Rendlesham Forest incident of December 1980 might be the strangest potential UFO sighting you’ve never heard of. Commonly referred to as “Britain’s Roswell,” it’s rather well known in England and ranks among the most head-scratching tales in ufology.

According to Atlas Obscura, the unnerving encounter took place in Rendlesham Forest in Suffolk, England, between the U.S. Air Force bases Woodbridge and Bentwaters. Soldiers working there at the time claimed to have witnessed an unidentified — and totally bizarre — object.

After soldiers followed the triangular-shaped craft into the forest, it disappeared at an extraordinary speed — but not without a light show first.

This encounter was too overwhelming not to report, leading to the infamous Halt Memo. Drafted by the deputy base commander Lt. Col. Charles Halt, who led a party into Rendlesham Forest, the account remains disquieting to this day.

It was so shocking that then-Prime Minister Margaret Thatcher allegedly said, “Don’t tell the people.”

Let’s take a look at what exactly happened.

It was about 3 a.m. on Dec. 26, 1980, which Halt reported as the 27th in his memo to the U.K.’s Ministry of Defense. The incident apparently began when two security patrolmen near the eastern gate of RAF (Royal Air Force) Woodbridge saw lights in the forest.

Considering the integrity of their base’s security, they asked permission to venture outside to investigate what they thought was a downed craft. The flight chief permitted up to three patrolmen to do so, after which they encountered “a strange glowing object in the forest.” 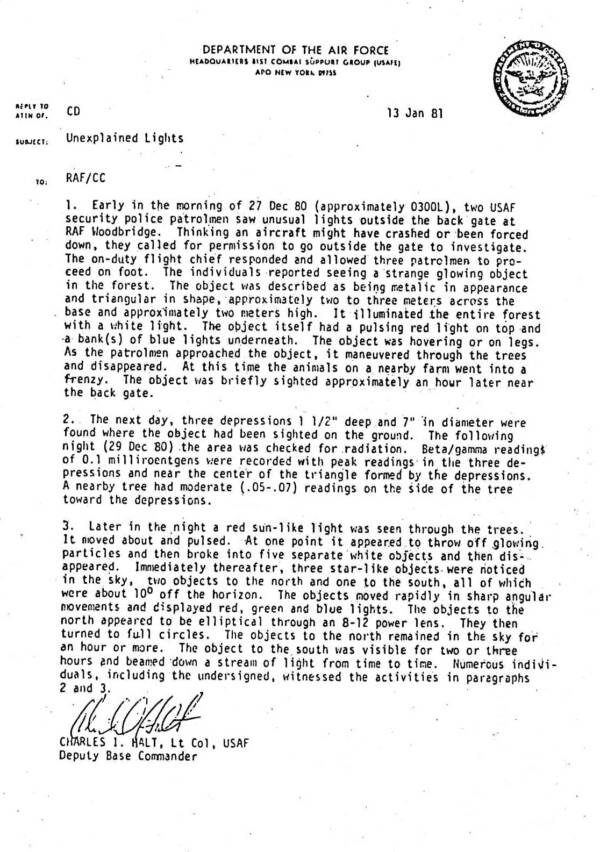 Wikimedia CommonsThe Halt Memo, originally titled “Unexplained Lights,” is as unexaggeratedly written as it is enthralling.

The triangular vessel was metallic, had three legs, and was about 10 feet across and six and a half feet high. That’s when things got even stranger — and wholly unbelievable to skeptics convinced we’ve never been visited by intelligent life. As Halt wrote:

“It illuminated the entire forest with a white light. The object itself had pulsing red light on top and a bank(s) of blue lights underneath. The object was hovering or on legs. As the patrolmen approached the object, it maneuvered through the trees and disappeared. At this time the animals on a nearby farm went into a frenzy.”

The craft was spotted again one hour later near the back gate of the base, before disappearing again.

The following day, officials returned to the site and clearly noted three depressions in the ground where the object had been spotted. Local police were called to the scene to corroborate these findings.

While the officers noted the three impressions in the ground, they thought they could have been made by an animal.

CorbisThis is the craft that Staff Sgt. Jim Penniston, who worked security at RAF Bentwaters, said he saw.

After confirming the one and a half-foot deep and seven-foot diameter imprints, the soldiers conducted rigorous radiation tests.

On Dec. 28, 1980 (reported as the 29th by Halt), they found that beta/gamma readings of 0.1 milliroentgens were recorded “with peak readings in the three depressions and near the center of the triangle formed by the depressions.”

Halt recorded this all on a cassette recorder. A copy known as the “Halt Tape” was released in 1984 by base commander Col. Sam Morgan.

It not only includes Halt investigating the forest and taking radiation readings, but also the sighting of bizarre lights that very night.

Apparently, Halt and his men spotted “a red sun-like light” through the forest trees. Halt claimed that “it moved about and pulsed,” while throwing glowing particles off its primary body and then breaking into five separate objects before disappearing. 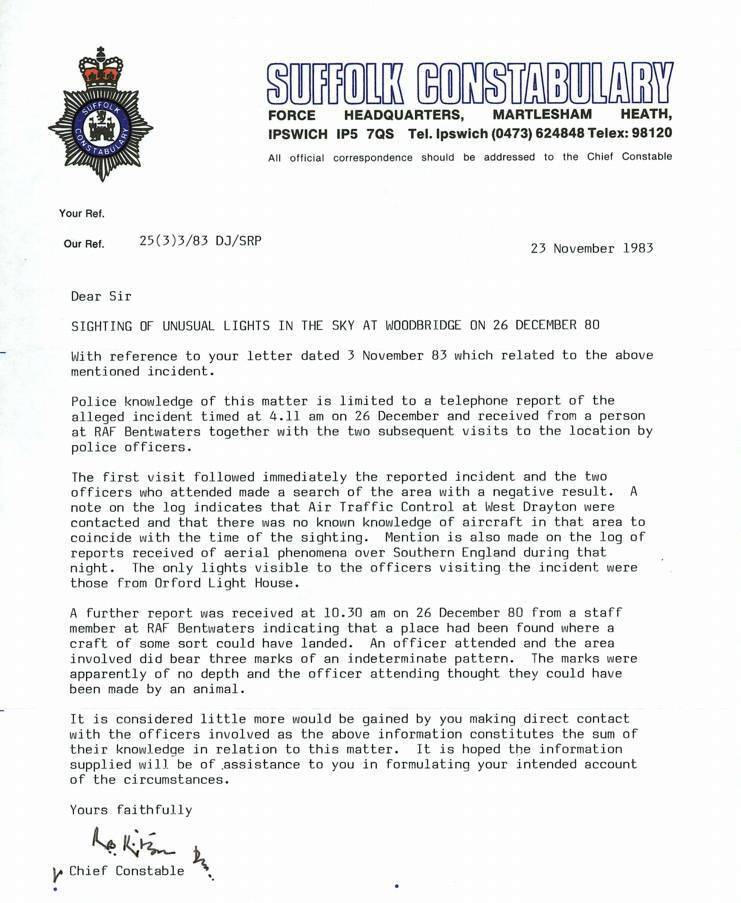 Suffolk ConstabularyLocal police officers were called to the scene in order to witness and corroborate the impressions made by the craft.

Halt claimed that immediately after the disappearance, three star-like objects were observed in the night sky. These objects, two to the north and one in the south, moved at high speeds and made “sharp angular movements” while flashing red, green, and blue lights.

The northern objects moved in an elliptical fashion before turning to full circles. The southern object was clearly visible for two to three hours, and often beamed a stream of light down toward Earth.

The Truth Is Out There

According to How Stuff Works, U.S. Senator James Exon launched an extensive yet secret inquiry into the incident. His findings were never revealed, but he did claim he learned “additional information” tying Rendlesham into “other unexplained UFO incidents.”

While an excerpt of the Halt Tape and its full transcription has been made publicly available by researcher Ian Ridpath, the Halt affidavit of June 2010 has complicated the integrity of Halt’s initial report.

According to Ian Ridpath, there are six notable problems with Halt’s claims. For instance, he originally failed to mention the nearby Orford Ness lighthouse, which could have been responsible for some of the lights.

Later, he tried to claim that lighthouse was about 40 degrees to the right of where he saw the mysterious light. However, photographs and maps revealed the lighthouse was nearly in line with the direction he claimed to see the UFO.

Other oddities include Halt failing to mention a laser-like beam of light coming near his feet in his original audio recording or memo — while making a point to include this shocking claim in several interviews since 1980. Finally, Halt’s claim that “several airmen” were present and saw this laser beam is dubious, at least.

Airman Tim Egercic, who was on duty at the time, firmly denied seeing any such beams — as did Base Commander Col. Ted Conrad, Halt’s superior.

So Conrad was furious when Halt claimed in his affidavit that he believes a cover-up occurred on behalf of both the U.S. and the U.K.

“He should be ashamed and embarrassed by his allegation that his country and England both conspired to deceive their citizens over this issue,” said Conrad. “He knows better.”

In the end, clear answers remain nebulous. While some vehemently believe Halt told the truth, there are alternatives to consider.

According to The Daily Mail, it’s been claimed that Britain’s Special Air Service (SAS) parachuted into the RAF Woodbridge complex in August 1980 and were later captured and subjugated to intense interrogation.

“After their release, the troopers made no complaint at their rough treatment but were determined to get their own back on the USAF for the beating that they received,” said British X-files expert Dr. David Clarke. 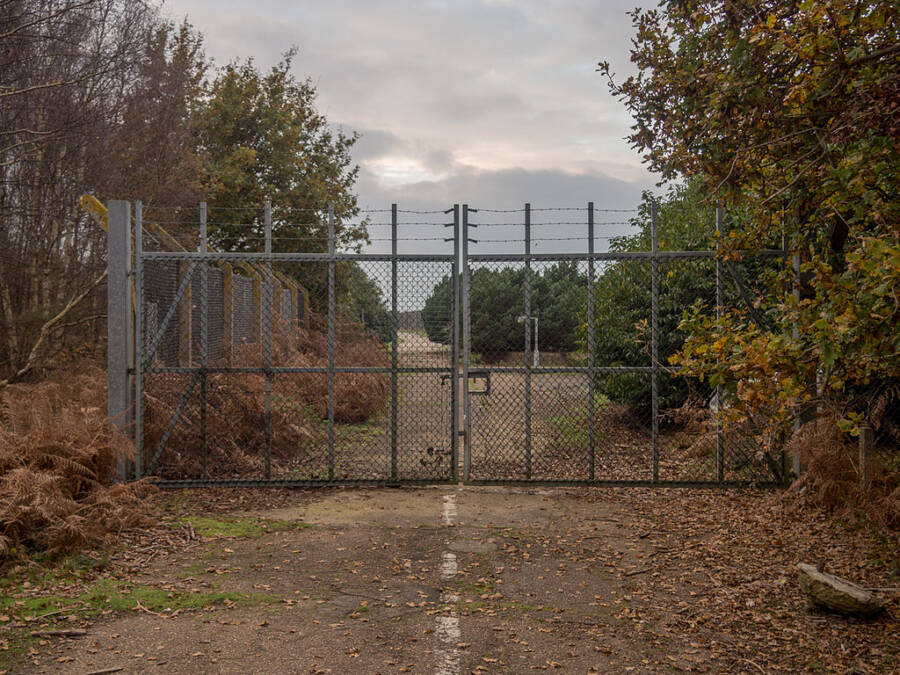 “In particular, their repeated characterization as ‘aliens’ sowed the seeds of a plan. They said: ‘They called us aliens. Right, we’ll show them what aliens really look like.'”

The theory posits that this group of disgruntled soldiers used helium balloons, colored flares, and lights that were tactically remote-controlled across the sky to fool U.S. and U.K. personnel.

Whether or not this tale of horseplay is true and explains away what happened in Rendlesham that December is unclear. As it stands, the frustrating mystery confused by contradictory accounts and levels of skepticism will likely remain open-ended for good.