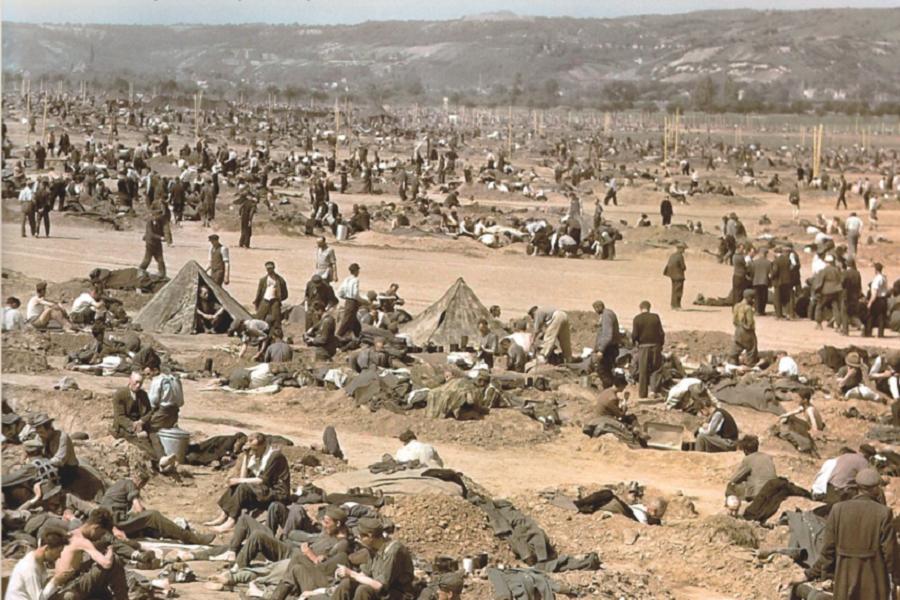 Wikimedia CommonsMillions of surrendered Germans were held under conditions the U.S. Attorney General compared to Andersonville, the notorious Civil War Confederate POW camp whose commandant was hung for war crimes.

The reason for Hughes’ interest in rations lies in the legal distinction he and others on Eisenhower’s staff had made. Surrendered Germans, they decided, would not be classed as POWs, but under a new and totally made-up designation of “disarmed enemy forces” (DEFs). As DEFs, rather than POWs, the men would be entitled to none of the Geneva Convention’s protections.

The American forces would not even be obliged to feed their captives, and they could legally — so went the argument — bar the Red Cross from inspecting their Rheinwiesenlager camps or sending relief aid.

Under their new legal status, the defeated German soldiers would almost literally become unpersons, a vulnerable position compounded by the fact that after the surviving German statesmen were arrested in Flensburg, German veterans didn’t even have a government to advocate for them anymore. They were perfectly helpless and totally at the mercy of the U.S. Army.

There is only one reason to strip prisoners of war of the legal status that protects them from mistreatment: to mistreat them. According to a 1989 book on the subject, Other Losses, by Canadian writer James Bacque, at least 800,000, and “quite likely over a million” prisoners lost their lives in American-operated Rheinwiesenlager camps during the summer and fall of 1945.

Conditions in the Rheinwiesenlager camps, which were later reviewed by the Surgeon General’s Office, “resembled Andersonville Prison in 1864.” Even Stephen Ambrose, the world-famous historian and sometimes-employee of the Eisenhower estate, who was hired by the late President’s family to investigate the book’s charges, admitted in a 1991 New York Times article:

“There was widespread mistreatment of German prisoners in the spring and summer of 1945. Men were beaten, denied water, forced to live in open camps without shelter, given inadequate food rations and inadequate medical care. Their mail was withheld. In some cases prisoners made a “soup” of water and grass in order to deal with their hunger. Men did die needlessly and inexcusably.”