On the night of July 13, 1966, Richard Speck brutally murdered eight nursing students in their Chicago residence — and the details were horrifying.

Richard Speck was one of the most fiendish mass murderers in American history as his slayings of eight nursing students — in a single evening — captured the attention of the entire nation.

On July 13, 1966, Speck unleashed his terror on Chicago by breaking into a building in the neighborhood of South Deering. At the time, this building functioned as a dormitory for student nurses. And tragically, eight women inside would meet horrific ends that night. 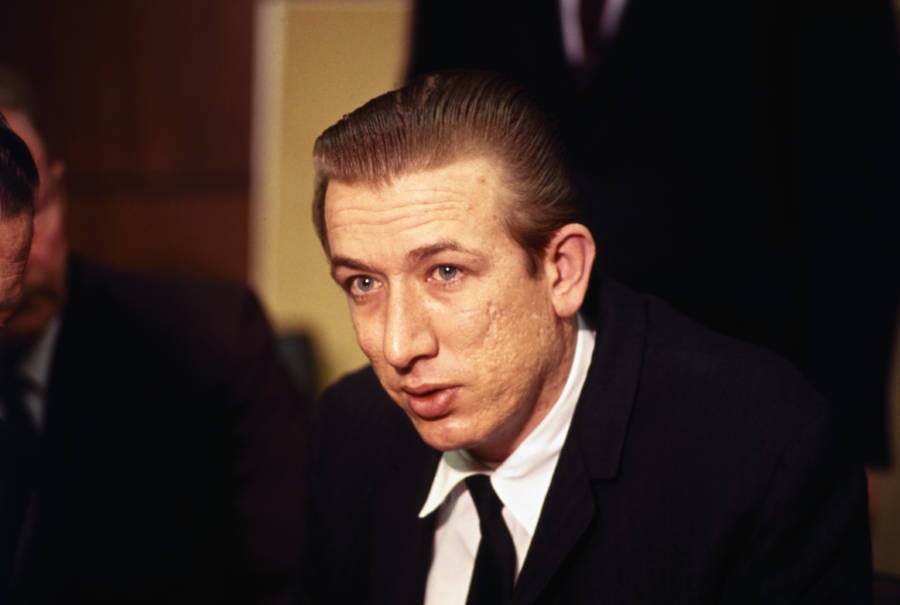 Bettmann Archive/Getty ImagesRichard Speck sits in court before being returned to Chicago.

This is the shocking true story of Richard Speck — and how he became a cold-blooded killer.

Richard Benjamin Speck was born in the small city of Monmouth, Illinois to two religious, teetotaling parents in 1941. But that childhood was derailed when he was six.

That year, in 1947, his 53-year-old father died from a heart attack. When his mother remarried a few years later, Speck’s new stepfather was the opposite of his clean-cut idol.

His stepfather was a traveling salesman with a long criminal record who would drink and verbally abuse the young Speck. With his new family, Speck moved to East Dallas, Texas, where they bounced from house to house, living in many of the poorer neighborhoods of the city. 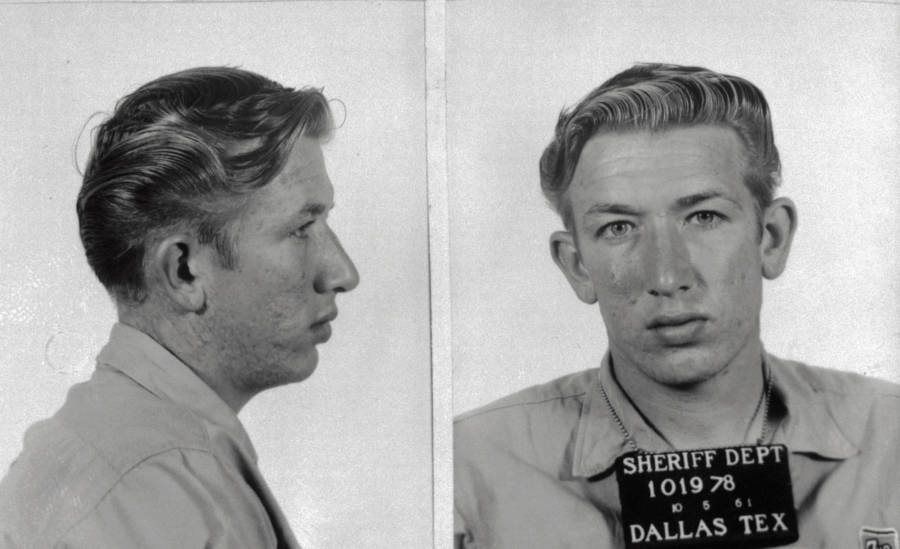 Bettmann/Getty ImagesA mugshot of Richard Speck taken when he was just 20.

Speck was a poor student throughout school. He refused to wear the glasses that he needed and would not speak in class due to anxiety. He repeated the eighth grade and eventually dropped out in the second semester of his first year of high school.

By that time, Richard Speck had picked up his stepfather’s drinking habit and was getting drunk almost every day.

Speck held a number of regular jobs and even got married after he impregnated a 15-year-old girl he met at Texas State Fair. However, he continued to run into trouble with the law.

He tattoed “born to raise hell” on his arm and certainly lived by that ethic. He would be arrested 41 times before the age of 24.

Richard Speck’s wife, Shirley Malone, reportedly lived in fear of him. Malone said Speck would often rape her at knifepoint and demanded sex four to five times a day from her.

“When Speck is drinking, he will fight or threaten anybody,” his probation officer once reported. “As long as he has a knife or gun. When he’s sober or unarmed, he couldn’t face down a mouse.”

The pockmarked, wreck of nerves became a career criminal and his arrests included theft, robbery, fraud, and assault.

In 1965, Speck attacked a woman in the parking lot of her apartment building with a 17-inch carving knife. Though she escaped, Speck was arrested and given a 16-month sentence. He was ultimately released after six months due to an error.

Fearing for her life, Speck’s wife filed for divorce and took full custody of their child.

According to The Crime of the Century: Richard Speck and the Murders That Shocked A Nation, Speck’s violence only escalated from there. After moving back to Monmouth to live with his sister, he stabbed a man in a bar fight, stole a car and robbed a grocery store, then burgled, tortured, and raped a 65-year-old woman in her home. 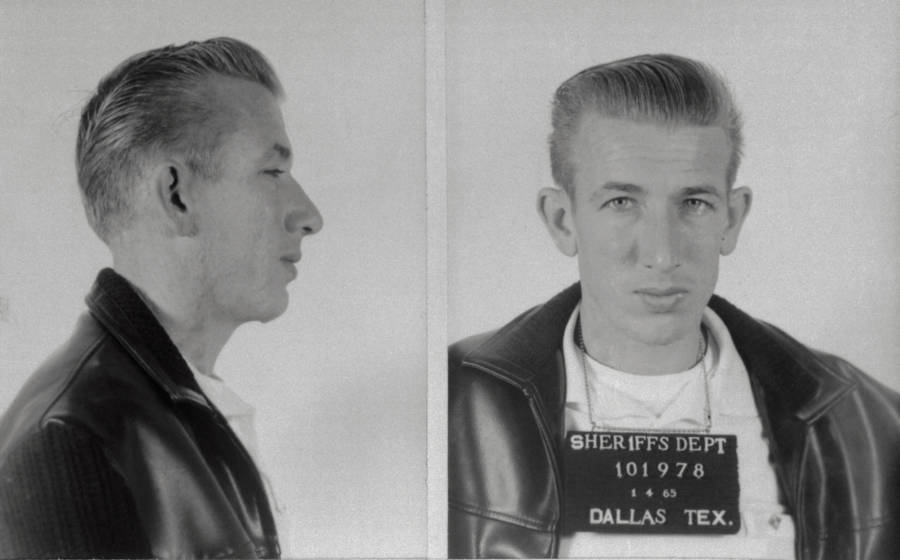 Bettmann/Getty ImagesMugshot of Richard Speck, taken when he was 23.

Speck then killed a 32-year-old barmaid who worked at a bar he was doing carpentry work for. After being questioned for this murder, Speck skipped town and moved in with another one of his sisters in Chicago.

By July of that year, Speck had outstayed his welcome and attempted to get a job on a ship with the National Maritime Union.

He stayed there for five days awaiting a shipping assignment and in that time, committed the worst of his crimes.

Inside The Horrific Chicago Massacre Of 1966

On July 12 after receiving an assignment, Speck arrived at the ship only to find his position had been given to someone else. Enraged, Speck embarked on a drinking spree in the neighborhood.

On his binge, Speck met Ella Mae Hooper, a 53-year-old woman who had spent the day drinking at the same taverns as him, who he then held up at knifepoint. Speck brought her to his room where he raped her and stole her mail-order .22 caliber Röhm pistol.

Armed now, Speck set out into the streets of the South Side of Chicago. After a mile, he came across a townhouse that was functioning as a dormitory for nine student nurses at the South Chicago Community Hospital. 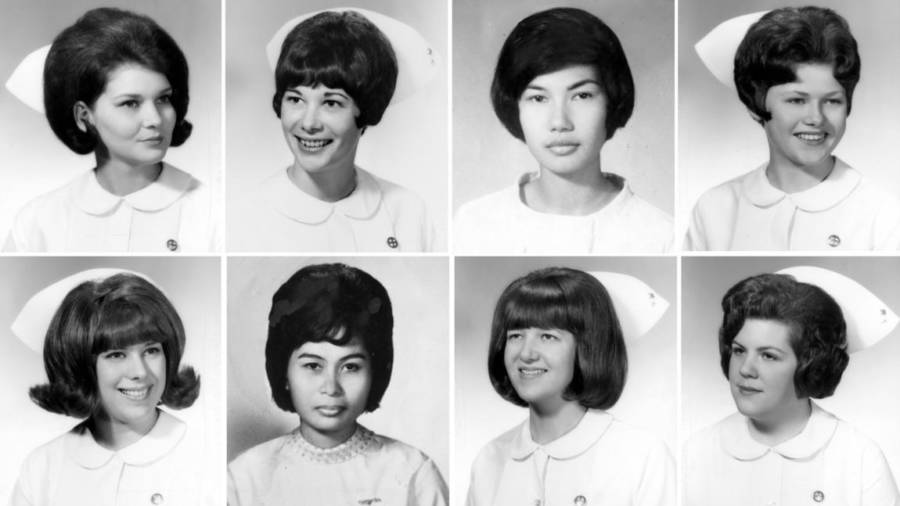 He knocked first on the door of Filipina exchange student nurse Corazon Amurao, 23, and, at gunpoint, herded her and her fellow exchange students from the Philippines, Merlita Gargullo, 23, and Valentina Pasion, 23, into the next room where American students Patricia Matusek, 20, Pamela Wilkening, 20, and Nina Jo Schmale, 24, were sleeping.

Speck then woke up the Americans and tied all six girls’ wrists behind their backs with strips of torn bedsheets.

Amurao, the lone survivor of the encounter, later said: “The American girls told us we more or less had to trust him. Maybe if we were calm and quiet he will be, too. He has been talking to us all and he seems calm enough and that is a good sign.”

Instead, Speck then led them one by one out of the room and then stabbed or strangled each of the women to death. 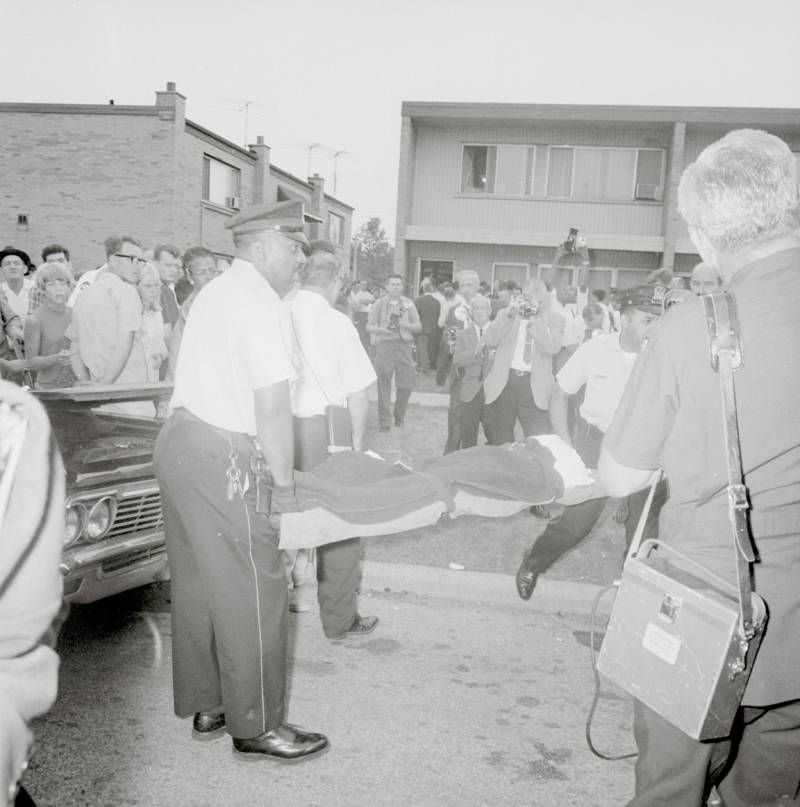 Corbis/Bettmann Archive/Getty ImagesPolice remove one of eight bodies of the student nurses slain by Richard Speck.

Amurao said that none of her friends screamed as they were being led from the room, but she later heard their muffled cries.

While Speck’s back was turned, Amurao rolled under a bed in the room.

In the midst of this carnage, two other student nurses who lived in the dormitory arrived home. First came Suzanne Farris, 21, who Speck stabbed to death in the upstairs hallway as she was walking to her room.

The second was Mary Ann Jordan, 20, who Speck also stabbed to death upon her entry to the dorm.

The final of these later arrivals was Gloria Jean Davy, 22, who was dropped off by her boyfriend late that night. She was the only one of the women that Richard Speck raped and sexually brutalized before strangling her.

Likely because of these late arrivals, Speck must have lost count of how many women he had tied up, as he forgot about Amurao.

She stayed hidden under the bed until 6 a.m. for safe measure, hours after Speck had finished his rampage. 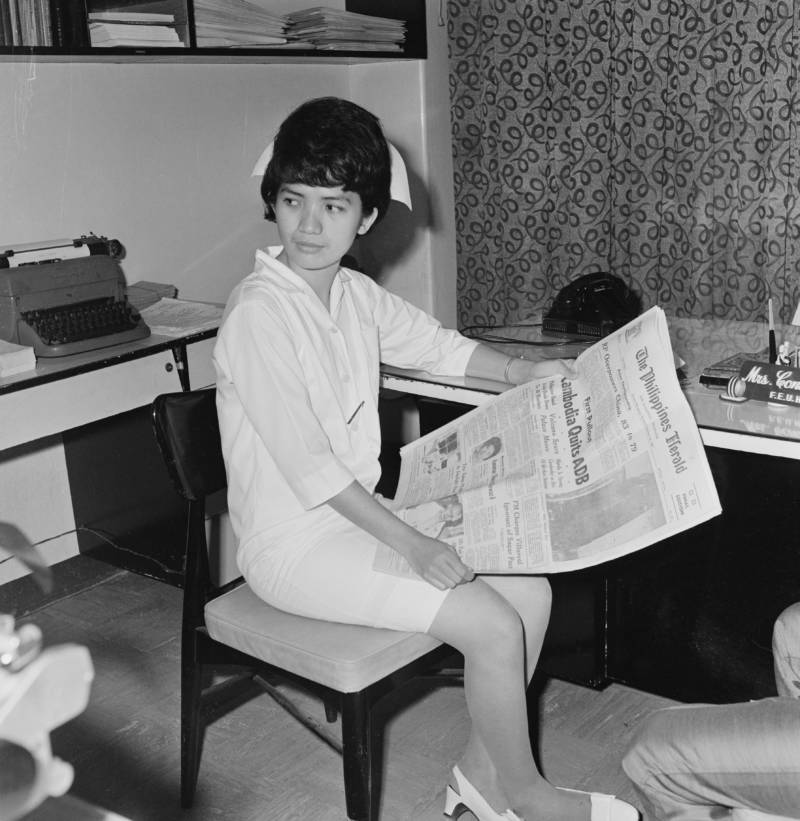 Amurao bolted from her hiding place to the nearest window, from where she screamed, “They are all dead. My friends are all dead. Oh God, I’m the only one alive.”

She continued screaming until the police arrived.

The Incarceration And Death Of Richard Speck

Though Speck had fled, he was easily recognized after he went to a hospital a few days later and a doctor noticed his tattoo after reading about it in a newspaper.

Speck was placed on trial for the murders after a panel of psychiatrists chosen by both his defense and his prosecution judged him competent to do so.

During his trial, which began on April 3, 1967, Speck claimed to have no recollection of the murders, something that did not bother the prosecution as they already had an eye-witness ready to identify him.

Amurao took to the witness stand for the trial, and in a dramatic moment, stood directly in front of Richard Speck, pointed at him, almost touching his chest, and said, “This is the man.” The prosecution also found fingerprints matching Speck’s prints at the scene of the crime. 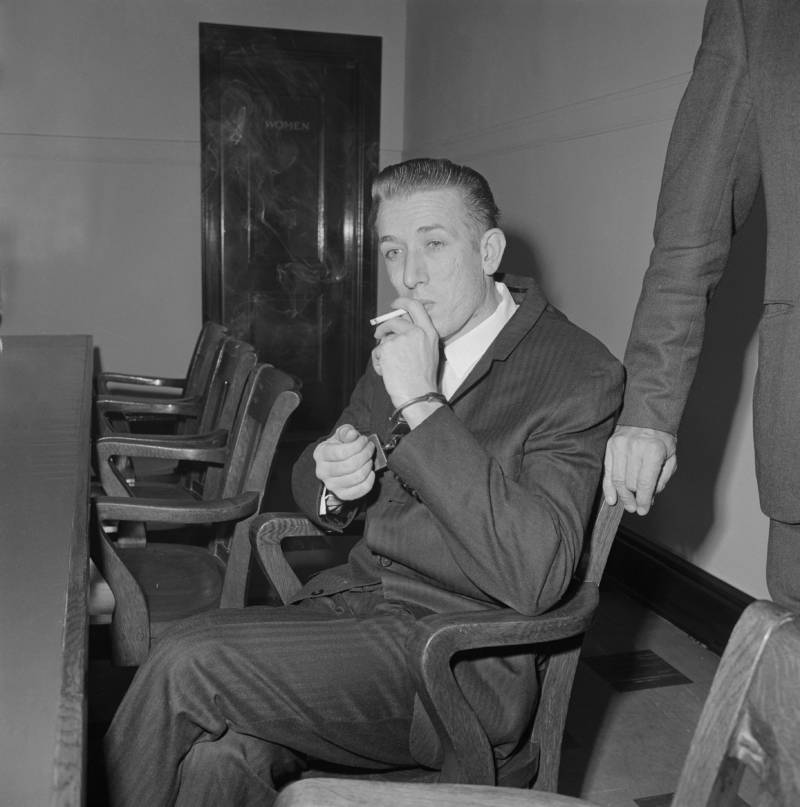 Bettmann/Getty ImagesRichard Speck at his trial.

The trial of Richard Speck was a national sensation. It was one of the first times in 20th-century American history that someone had killed so many people at random.

For many at the time, it was seen as the end of an era of innocence, when it was never assumed that someone would kill helpless victims without clear motivation. Of course, just two years later, Charles Manson would end the ’60s decade of love for good.

After only 45 minutes of deliberation, the jury came back with a guilty verdict for Speck.

He was initially given a death sentence, but this was reduced to life in prison in 1971 when the Supreme Court ruled that people opposed to the death penalty were unconstitutionally excluded from the jury.

Speck served this sentence at Stateville Correctional Center in Illinois. Throughout his time there, he regularly got caught with drugs and moonshine.

He was given the nickname “Birdman” because he kept a pair of sparrows that had flown into his cell.

In 1996, a bizarre video taken of Speck in 1988 was released to the public by an anonymous attorney. In the video, Speck, wearing silk panties and with female-like breasts grown using smuggled hormone treatments, performs oral sex on another inmate, while they both do large amounts of cocaine.

The shocking video of Richard Speck in prison in 1988.

At one point, a prisoner from behind the camera asked Speck why he killed the eight student nurses, to which he merely replied, “It just wasn’t their night,” and laughed.

Now that you’ve read about Richard Speck, learn about serial killer Edmund Kemper, whose story is almost too gross to be real. Then read about the horrific true story of the real Amityville murders behind the movie.