The Shocking Story Of Robert Hanssen, The Star FBI Agent Who Sold American Secrets To Moscow For 22 Years

In what is now considered the largest intelligence breach in FBI history, Robert Hanssen’s scandal made him millions in diamonds and cash, but cost the FBI $7 million — and the lives of three informants. 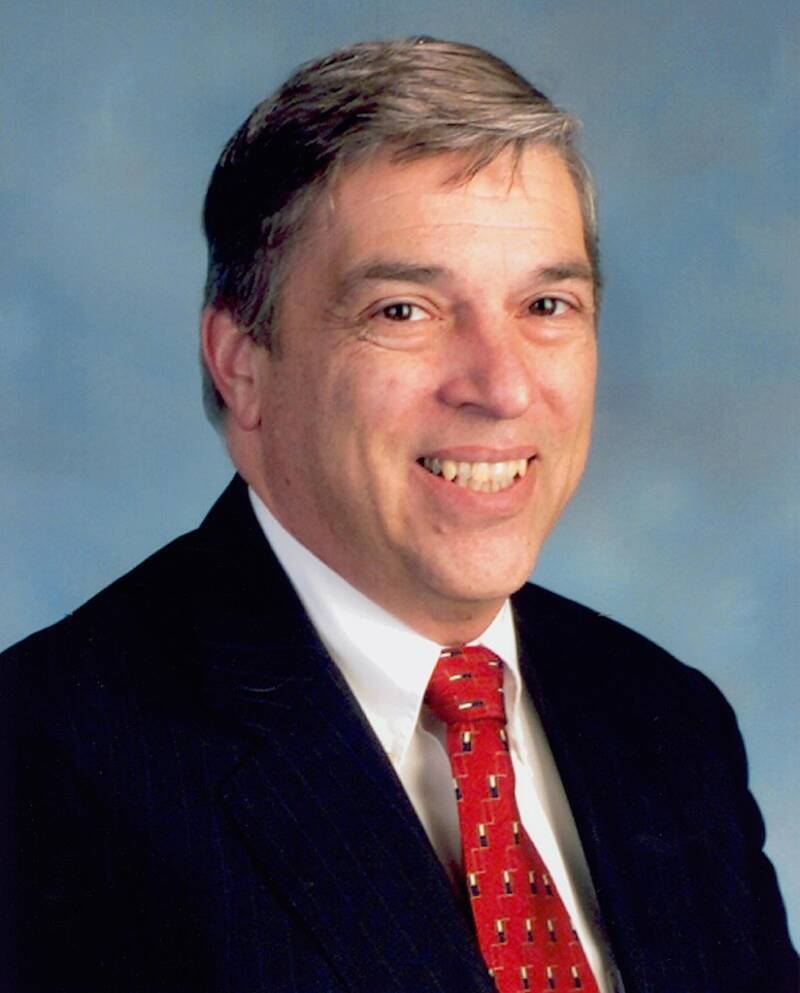 Wikimedia CommonsRobert Hanssen made over $1 million spying for the Soviets until he was caught in 2001.

To the residents of the quiet suburb of Vienna, Virginia, Robert Hanssen was the perfect neighbor. A devout Catholic, a loving father, and a dedicated employee of the Federal Bureau of Investigation, hardly anyone could have imagined the gentle 56-year-old being anything other than Bob, the all-American guy next door.

But for 20 years, Robert Hanssen was anything but that ideal. To his handlers in the KGB, he was Ramon Garcia, one of their longest-serving informants and a veritable bottomless source of information on United States espionage, security, and computer systems.

By the time he was finally caught in 2001, Hanssen had given away countless secrets, led two U.S. informants to their deaths, and cemented himself as “the most damaging spy in FBI history.” 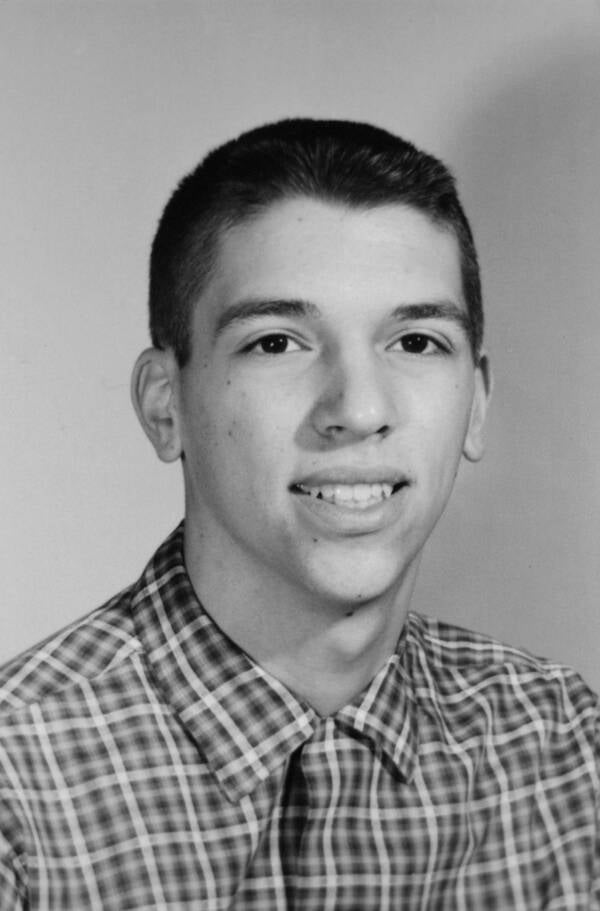 Robert Philip Hanssen had drifted through several false starts in life before he settled in at the FBI.

His father, Howard, had reportedly belittled, bullied, and berated the boy from childhood to his college years at Knox College, 200 miles away from his home in Chicago.

Although the elder Hanssen encouraged his son to become a doctor, his son was uninterested in studies of any kind, and eventually received a degree in chemistry in 1966. His not-so-secret passion, however, was for codes, radios, and gadgets.

As if foreshadowing things to come, Robert Hanssen took Russian language classes at Knox and decided there that he’d catch Soviet spies one day.

Despite his clear passion for mechanical things, Hanssen abided by his father’s wishes and briefly attended dental school before marrying Bernadette “Bonnie” Wauck.

He then went to work as an accountant before applying to the Chicago Police Department in 1972, where he was quickly accepted as an undercover investigator for the internal affairs division. He found the work interesting, but he soon tired of it. Finally, in 1975, he applied to the FBI – and received a call back.

At the end of weeks of training in Quantico, Virginia, Robert Hanssen was sworn in as a special agent and pledged his loyalty to the United States. 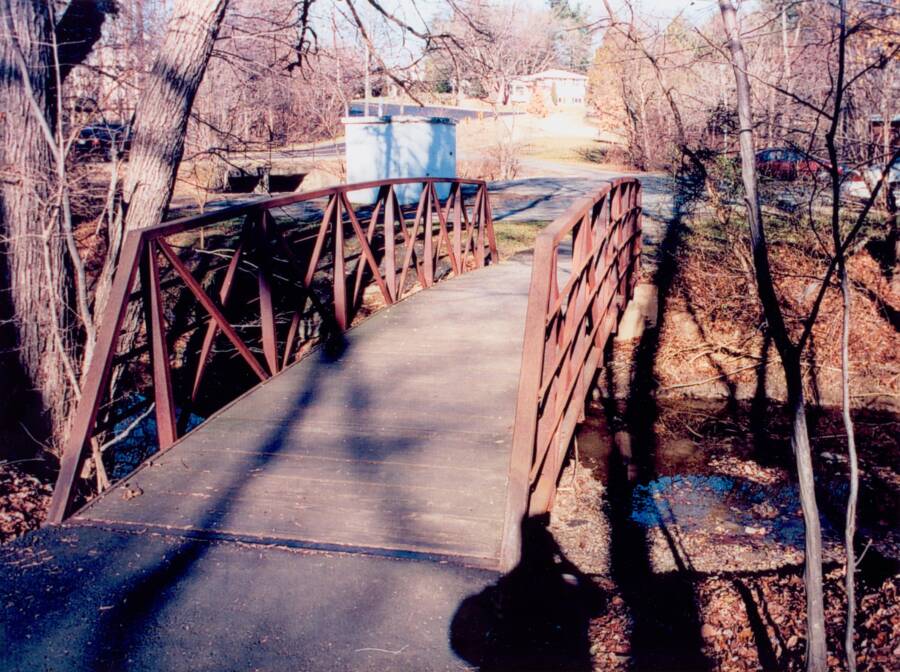 Wikimedia CommonsAfter arranging a sale of information, Hanssen’s KGB contacts would leave bags of money taped to the underside of footbridges like this one for him to retrieve.

By 1979, the Hanssens and their three children were transferred to New York City. FBI policy required routine rotations to discourage their agents from growing complacent, but they didn’t offer additional pay for the high cost of living in a large city.

As such, Robert’s credit card bills, mortgage payments, and debts piled up, even as he was forced to move his family further away from Manhattan as his family grew.

Despite the low pay, long hours, and even longer commute, the FBI entrusted him with more responsibility. When he was transferred to counterintelligence, Hanssen gained access to the most sensitive, secret documents concerning espionage in the United States.

He knew all the details surrounding the surveillance operations that targeted Soviet citizens and officials in the country, who was watched, and who to approach. A plan began to form in his mind.

Selling Out To The Soviets 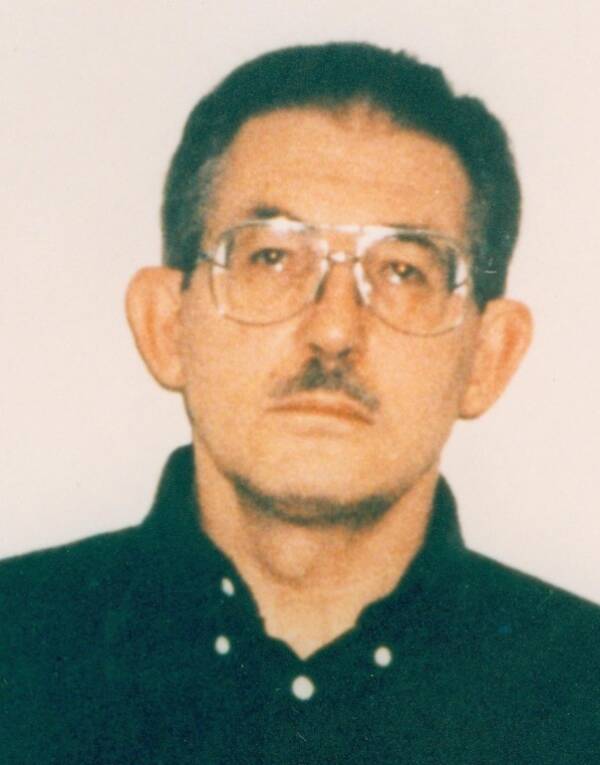 Desperate for a way out of his money troubles, Hanssen sent an anonymous letter to a minor Soviet official at the United Nations.

He offered up the name of General Dmitri Polyakov, a high-ranking mole in GRU, which is the USSR’s foreign military intelligence agency, in exchange for $20,000. Should the Soviet official agree to the switch, Hanssen wrote, they could arrange for the swap through a personal ad in The Village Voice.

Sure enough, just weeks later, the ad was answered. Hanssen was now officially in the employ of the Soviet Union.

Meanwhile, Hanssen was promoted and reassigned to Washington, D.C., the FBI’s nerve center, to work in the budget office. He now had access to even more top-secret information on nearly every active operation, including names, funding, locations, and dates, as well as the activities of agents, spies, and informants.

This time, he addressed it to Victor Cherkashin, a senior KGB counterintelligence officer who’d already recruited a CIA agent named Aldrich Ames just months earlier. In the letter, Hanssen offered the names of three Soviet moles on the FBI’s payroll, along with proof. He demanded $100,000 in return.

He had no way of knowing that the CIA agent had already supplied those names to the Soviets, but his willingness only confirmed his reliability to them.

Meanwhile, once those moles Hanssen had given up returned to Moscow, they were promptly executed.

He Made Over $1 Million Spying For The Soviets 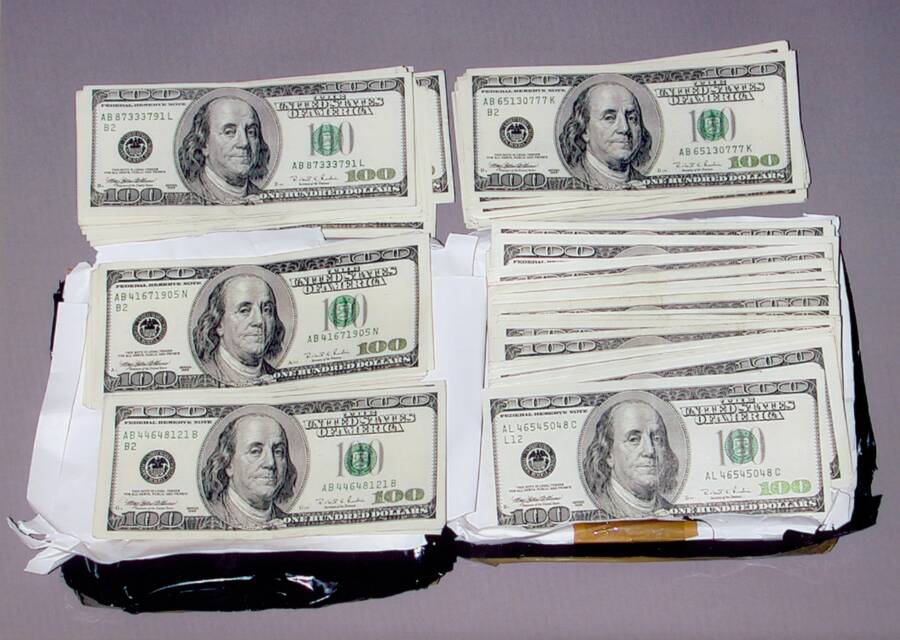 In exchange for years of spying for the Soviets, Hanssen received a total of $1.4 million in cash and diamonds.

On November 2, after a lengthy debate in Moscow as to whether this new mole could be trusted, Hanssen was instructed to look underneath a bridge in Nottoway Park in Vienna, Virginia. There, he found a watertight bag containing his money. It was the beginning of a long career as a Soviet agent.

Over the next few years, Hanssen sold numerous secrets to Cherkashin for several tens of thousands of dollars. All the while, the FBI tasked him with recruiting potential moles and sniffing out likely spies.

He was even assigned to track down the person responsible for what was, by now, clearly a gaping hole in U.S. counterintelligence, a hole which he and Aldrich Ames had opened.

He took the opportunity to divert attention from himself and throw mole-hunting teams off the scent.

Through Hanssen, the KGB learned about a secret tunnel that had been dug underneath the Soviet embassy in Washington. Hanssen warned them when their spies were under suspicion and gained extensive lists of double agents working for the United States.

He even encouraged his KGB handlers to recruit his childhood best friend, a lieutenant colonel in Army intelligence. He signed all his typewritten letters to Cherkashin as “Ramon Garcia,” hoping the letters “-cia” might throw the FBI off.

He made over one million dollars, struck up a platonic relationship with a D.C. stripper, took trips to Hawaii with her, and showered her with gifts.

But the fast lifestyle came to a halt in December 1991 when the Soviet Union collapsed. 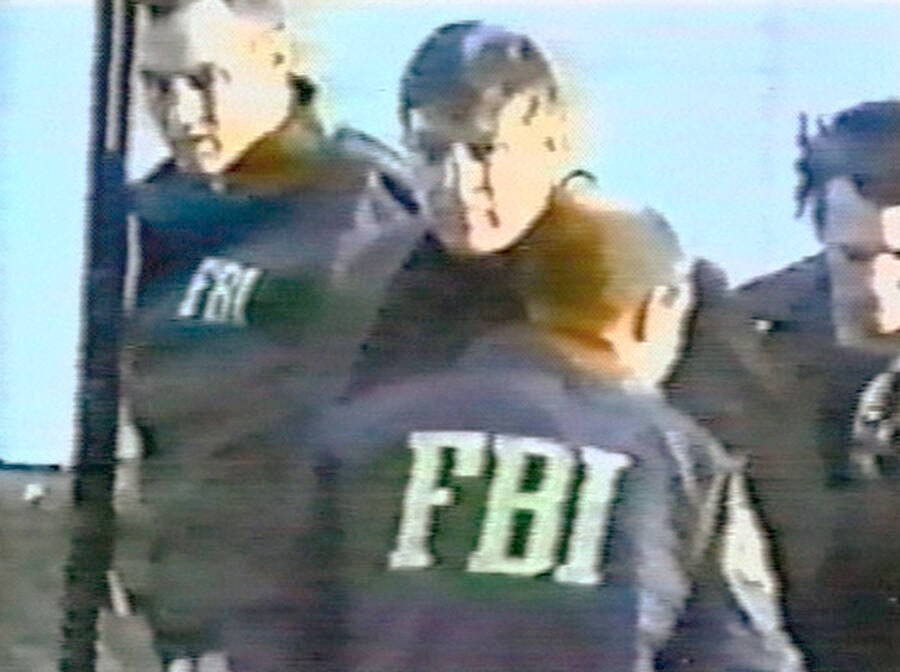 Getty ImagesRobert Hanssen being arrest near his home on Feb. 18, 2001 in Vienna, Virginia.

In 1994, Aldrich Ames was arrested, and the FBI and the CIA worked together to track down the suspected final mole. As Soviet intelligence agencies reeled in the aftermath of the collapse of the USSR, federal agents sought out disaffected former KGB operatives willing to sell information.

They found their information in Aleksandr Shcherbakov, an ex-KGB agent who’d gone into private business and was all too happy to share what he knew ⏤ for $7 million.

He provided a file that contained damning evidence implicating Hanssen as the mole.

In 2000, Hanssen was promoted yet again to one of the FBI’s top computer experts. This promotion came with perks including a private office and a personal assistant. What he didn’t know was that the promotion was really an excuse to keep him in Washington, where he could be watched.

His assistant, Eric O’Neill, was there to gather evidence and prove beyond a doubt that Hanssen was guilty of what he was accused of.

O’Neill noticed that Hanssen was using a Palm III personal computer to store information, and on Feb. 15, 2001, he took the computer from Hanssen’s office and handed it over to a team of specialists, who downloaded and decoded the contents.

There they found definitive evidence that Hanssen had betrayed his office. 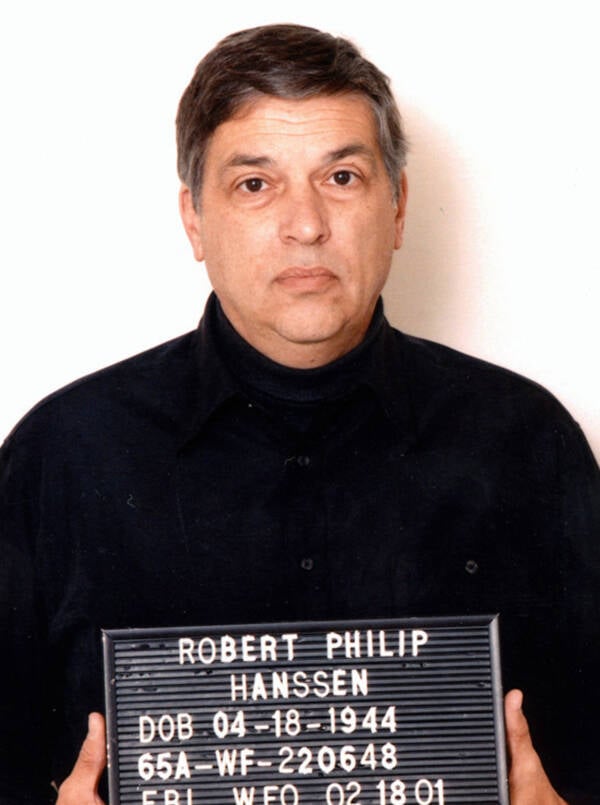 Wikimedia CommonsHanssen is currently being kept in a federal prison in Colorado where he remains in solitary confinement for 23 hours a day.

Meanwhile, Hanssen’s suspicions that the FBI was onto him had been growing. In his last letter to his Russian contacts, he wrote, “Something has aroused the sleeping tiger.”

Even so, he didn’t stop. On Feb. 18, 2001, he dropped a friend off at the airport and drove home by way of Vienna’s Foxstone Park, the site where he regularly picked up his money. As he went to his car with the money in hand, two vans screeched to a stop nearby, and armed agents poured out to arrest him.

All Hanssen said was, “What took you so long?”

Charged with 14 counts of espionage, and one count of conspiracy to commit espionage, Robert Hanssen faced the death penalty — particularly since his actions had led to the execution of the Soviet informants for the United States.

He was sentenced to 15 consecutive life sentences, which he’s currently serving at the federal penitentiary in Florence, Colorado. Prisoner #48551-083 — as he is known today — is held in solitary confinement for 23 hours a day, and he has no possibility of receiving parole.

Now that you’ve read about Robert Hanssen’s career as a Soviet mole, learn about William Sebold, the unlikely double agent who took down dozens of Nazi spies. After that, read about the exciting and strange stories of history’s most famous spies.