Aboard The Rocky Mountaineer: The Glass-Domed Luxury Train That Journeys Through The Rockies

On the Rocky Mountaineer, you'll experience the Canadian Rockies, five-star-dining, and according to the line's website, even a Sasquatch sighting.

For those who crave being truly “unplugged” while on vacation, the Canadian rail-line, Rocky Mountaineer GoldLeaf, may be the answer.

The luxurious glass-domed train winds through the Canadian Rockies providing nearly unobstructed views of the passing nature and wildlife. 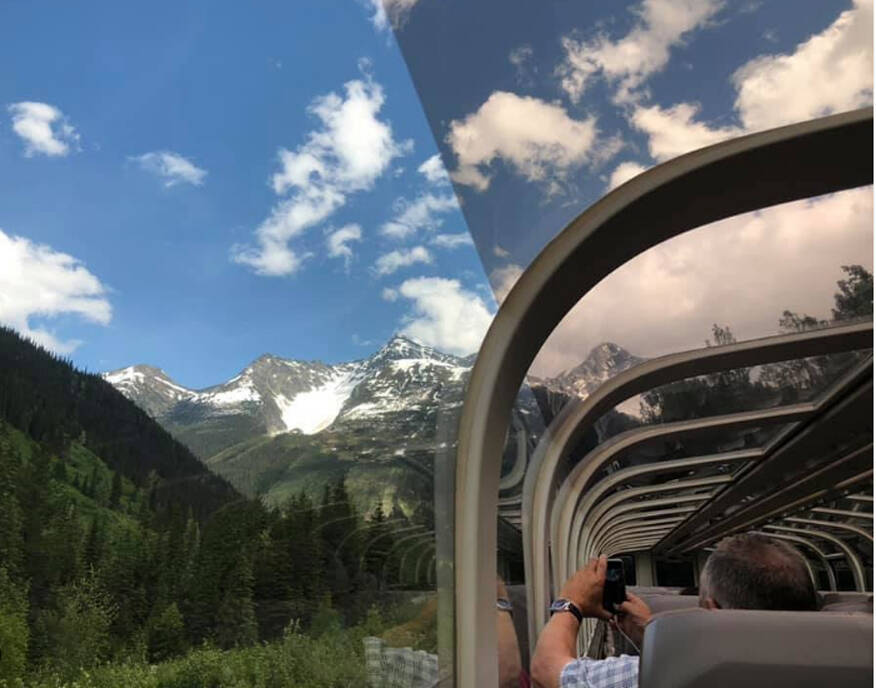 There are four different routes aboard the Rocky Mountaineer GoldLeaf with 65 possible packages. You can embark on a two-day, one-night journey between Vancouver and Banff or Lake Louise. For a longer excursion, you can book a four-day, three-night jaunt between Jasper and Vancouver.

Additionally, you can choose to extend your vacation to a full 14 days by adding hiking trips or tours to your package. While there are no sleeper cars aboard the train, the excursion does include hotel stays along each portion of your journey.

Literally, your only true responsibility aboard the Rocky Mountaineer GoldLeaf is to relax. The hosts will book your hotel stay, deliver the keys to you onboard the train, and at the end of the day, you’ll arrive already checked in.

Inside your room, your luggage will be waiting. 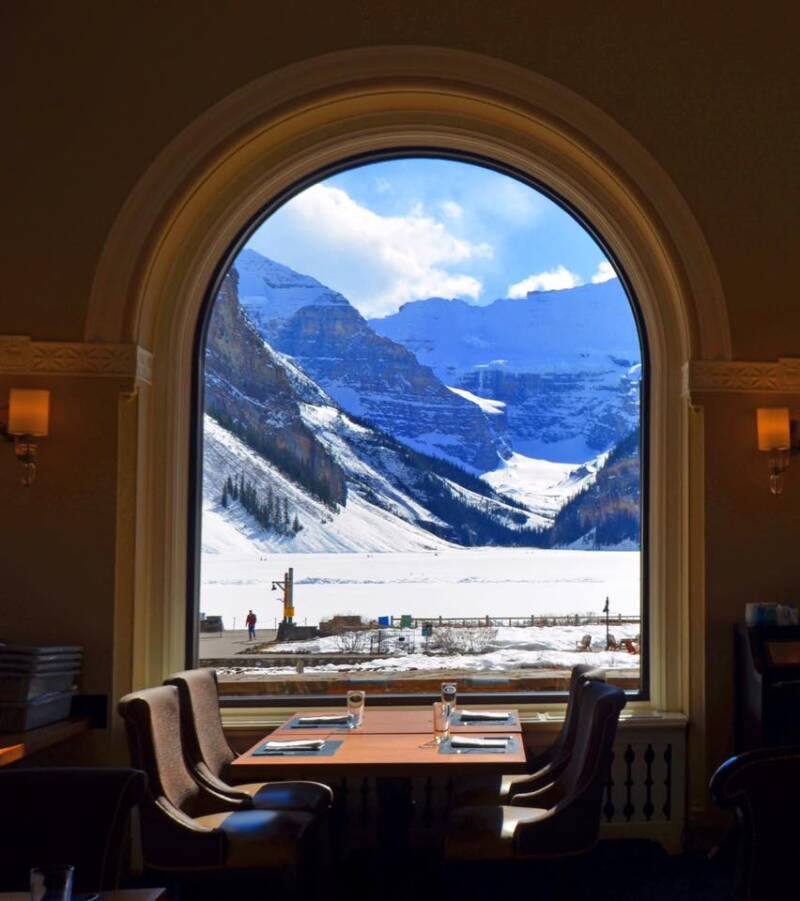 Your Experience Aboard The Rocky Mountaineer GoldLeaf

Two classes of service are available for the train; the SilverLeaf or the GoldLeaf experience.

These packages mainly differ by window size and dining access. The GoldLeaf service is equipped with a five-star restaurant, fresh, chef-prepared breakfast, and lunch, as well as afternoon wine and cheese. 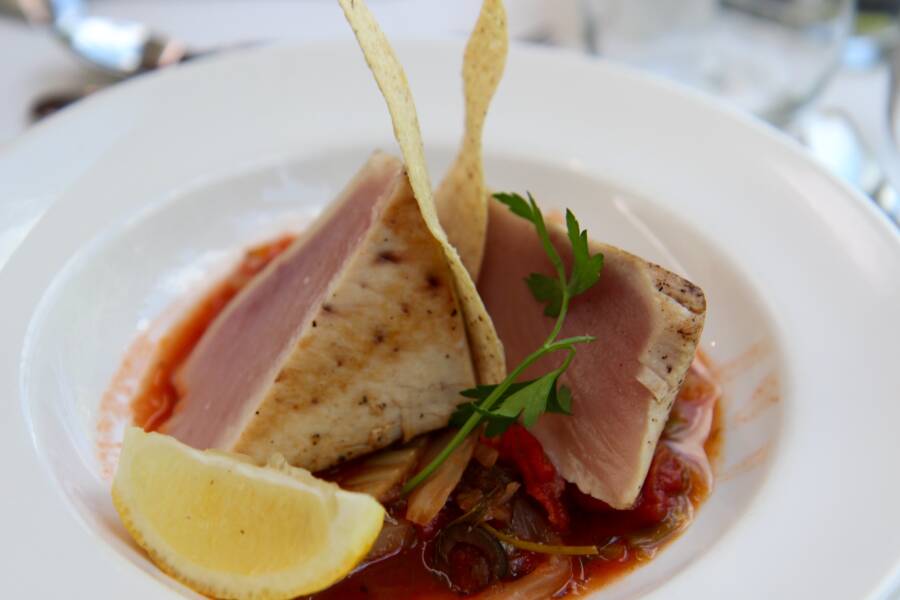 There isn’t any wi-fi aboard the trains, so as to keep outside distractions to a minimum while the Rocky Mountains tower over you. Food, alcohol, and your hotel stay is all-inclusive in the price of your ticket.

While the SilverLeaf passengers also get huge windows, they don’t get to experience a fully domed, unobstructed view as with the GoldLeaf service. SilverLeaf passengers do, however, have access to an open-air platform. Stepping out into the crisp Canadian breeze seems like a nice way to stretch your legs for a few minutes. 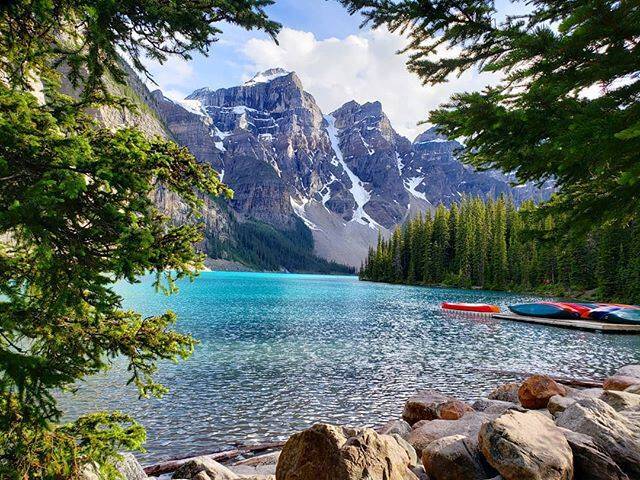 The GoldLeaf cars feature dimmable domed windows that utilize a suspended particle device layer. This can be adjusted to diminish the amount of incoming sunlight. Similar technology is used in luxury yachts. 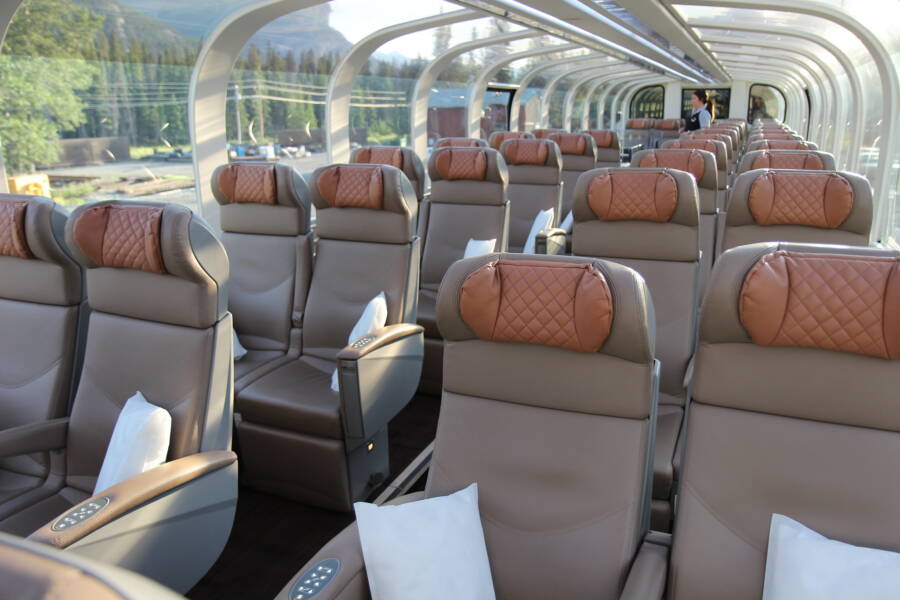 Each Rocky Mountaineer GoldLeaf rail car holds 72 guests. Heated, composite-leather seats can recline without encroaching upon the guest behind you. Seats can also rotate 180 degrees, so groups can socialize with ease. 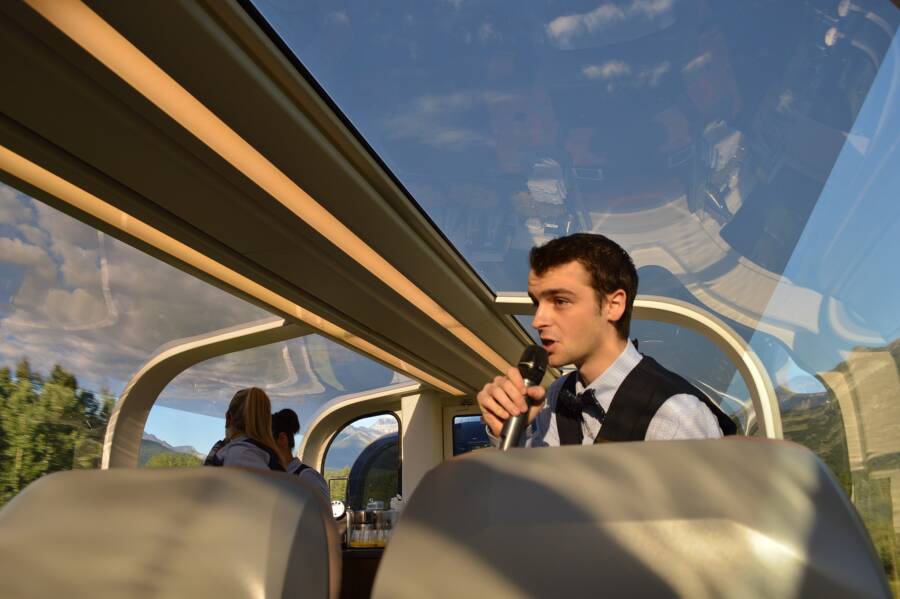 ToddPhillips2016/Wikimedia CommonsHost provides a little narration in the upper deck.

Several hosts ride the train with you and provide entertainment by way of heartwarming stories or historical tidbits.

They’re there to show you the spot where the last spike for the Canadian Pacific Railway line was driven at Craigellachie. Or to show you the engineering wonders that are the Spiral Tunnels; which go under the Trans-Canada Highway, across the Kicking Horse River, into the Lower Spiral Tunnel in Mt. Ogden, inside the mountain, and emerge again over the Kicking Horse River. 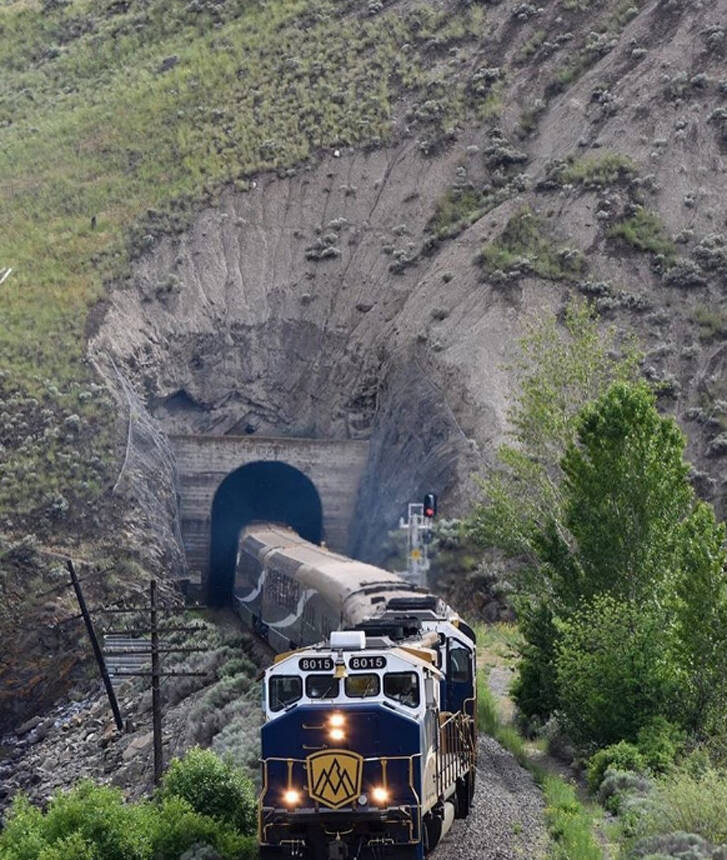 Hosts are there to anticipate any needs you might have and to make sure your trip is as enjoyable a possible. 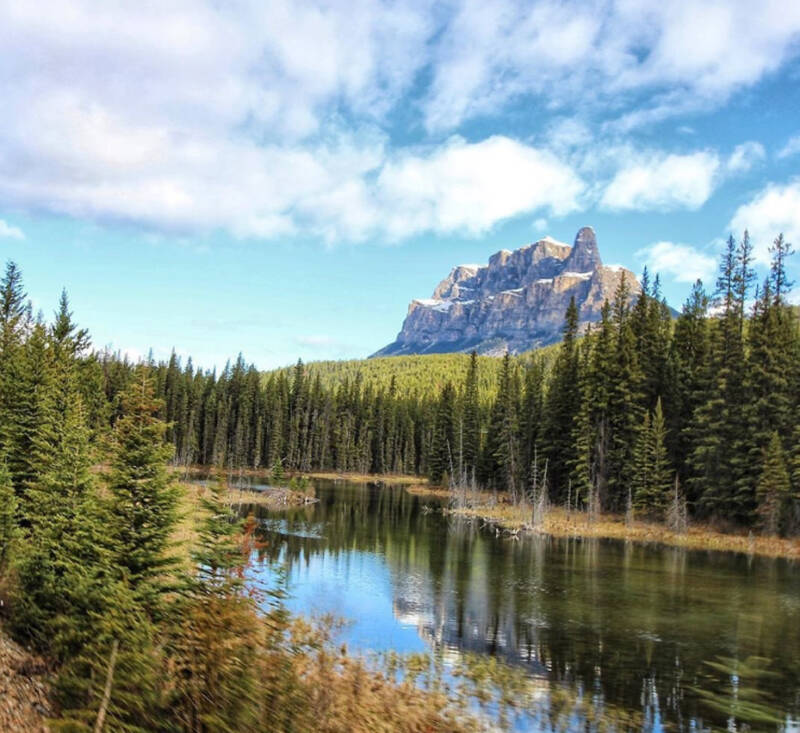 RockyMountaineer/InstagramMountaintops appearing beneath the clouds.

Mount Robson in British Columbia is the highest peak in the mountain range and extends approximately 13,000 feet into the sky.

Some of the sights you’ll encounter on your journey with Rocky Mountaineer GoldLeaf service.

Banff and Jasper are two of the most popular destinations for visitors to Canada.

Jasper National Park is certainly glorious and these Canadian towns are connected by a highway that provides tourists with unobstructed mountain views from both sides.

Near Jasper is Athabasca Falls — the most powerful waterfall in the entirety of the Rockies. 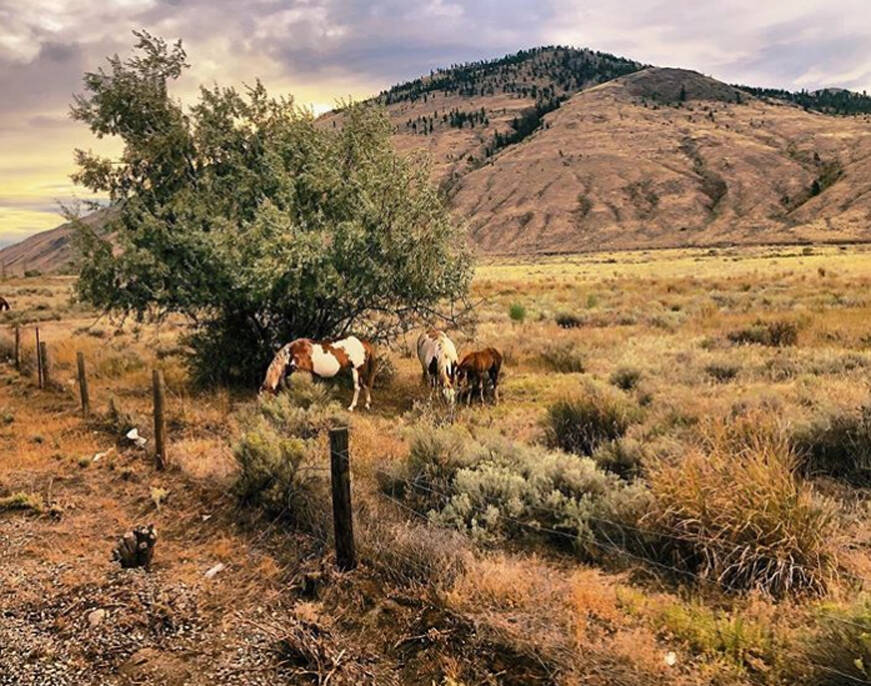 Elk, deer, bighorn sheep, bald eagles, falcons, and osprey are some typical wildlife you may encounter on the way.

One guest of the Rocky Mountaineer GoldLeaf has a pretty great story to tell about the level of customer service the manager and hosts provided her.

If you’re lucky, you could catch a few wolverines, moose, or mountain goats. Not-so-typical sightings include the legendary Sasquatch. Indeed, the Rocky Mountaineer GoldLeaf’s website insists it is a possibility.

Alas, this is just a sampling of the animals you can spot from a moving train. On the hiking trails, you’ll likely encounter porcupine, marmots, pika, and pine martens — similar to minks or otters.

The best times of year to observe wildlife — and thus perhaps to book your travels — are the spring, fall, and winter as most animals tend to stay at higher elevations during the summer. 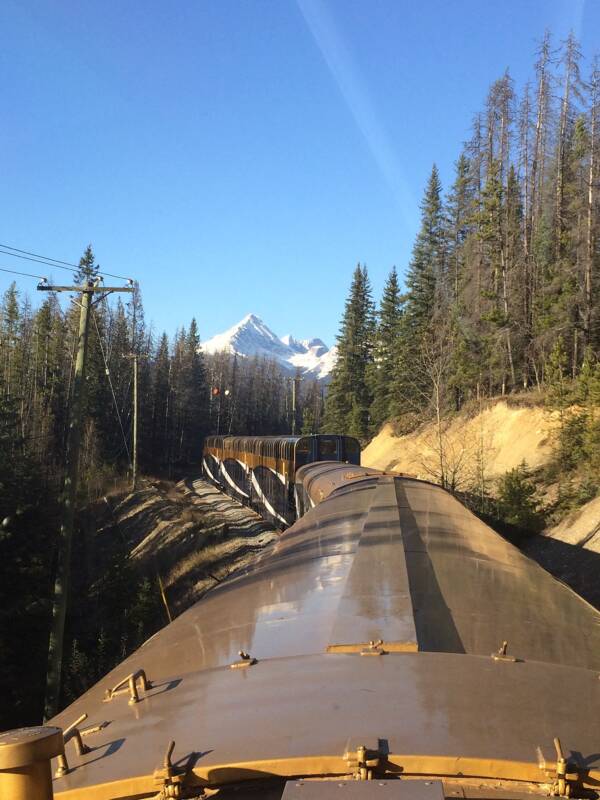 The Future Of The Rocky Mountaineer GoldLeaf Lines

The Rocky Mountaineer began as a once-weekly daytime rail service between Calgary and Vancouver in June of 1988.

The Rocky Mountaineer recently added four new train carriages to its fleet and another three are on the docket for 2020. In addition, you can now add an Alaskan cruise to the beginning or end of your train journey.

The privately-owned luxury railway service operates April through October and is celebrating its 30th anniversary in 2019.

Next, read about the first-ever zero-emissions train, then engage your inner adventurer and learn about Forrest Fenn’s lost treasure of the Rockies.