Meet Rolf Buchholz, The 60-Year-Old Man With The Most Body Modifications In The World

Rolf Buchholz has 516 body modifications, 268 of which are penis piercings. 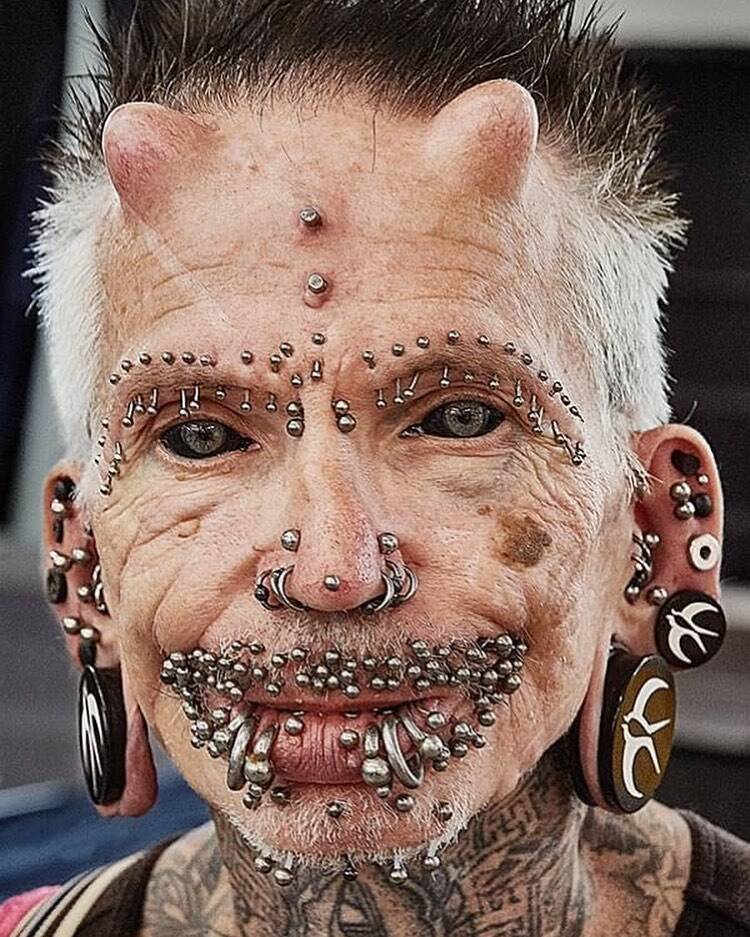 robuchholz/InstagramGerman-born Rolf Buchholz first set the world record for body modifications in 2012 — and has since added more alterations to his unique appearance.

For some, tattoos and piercings are an expression of self identity. For 60-year-old Rolf Buchholz, it’s more like a way of life. And according to the Guinness World Records, he now holds the record for the most body modifications on a single person with 516.

As the news agency UPI reported, German-born Buchholz wasn’t always into making himself standout. He got his first tattoo pretty late in life at 40 years old, but then quickly became addicted to body art and began experimenting further with piercings.

Now, 20 years since his first fateful tattoo, Rolf Buchholz has a record-breaking number of alterations to his physical appearance. His body modifications include 453 piercings — 158 of which adorn his lips — tattoos, and two subdermal implants that stick out of the top of his head like a pair of horns.

“A lot of people think I’m the devil. But I don’t believe in the devil,” he said.

How Rolf Buchholz Became The World’s Most Modified Man 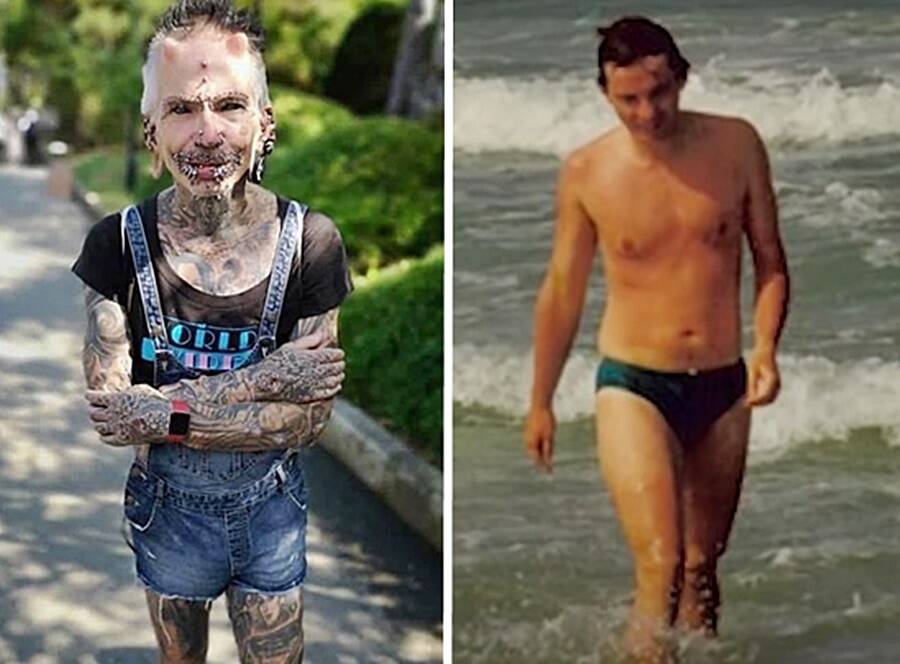 Buchholz first caught the world’s attention in 2010 when he was recognized by Guinness as the man with the most body piercings. At the time, his official count was 453, including 158 just around his lips and 37 adorning his eyebrows.

Buchholz also has scarification markings all over his skin and more than six subdermal implants around his wrists. Roughly 90 percent of his body is also covered in tattoos, and not even Buchholz’s eyeballs have been spared his extreme transformation. It’s not specified what kind of procedure he had to get, but the whites of his eyes are now completely black.

“The eyes are ink, they are black,” Buchholz explained of the unusual coloring. “They are very black. I like it.” 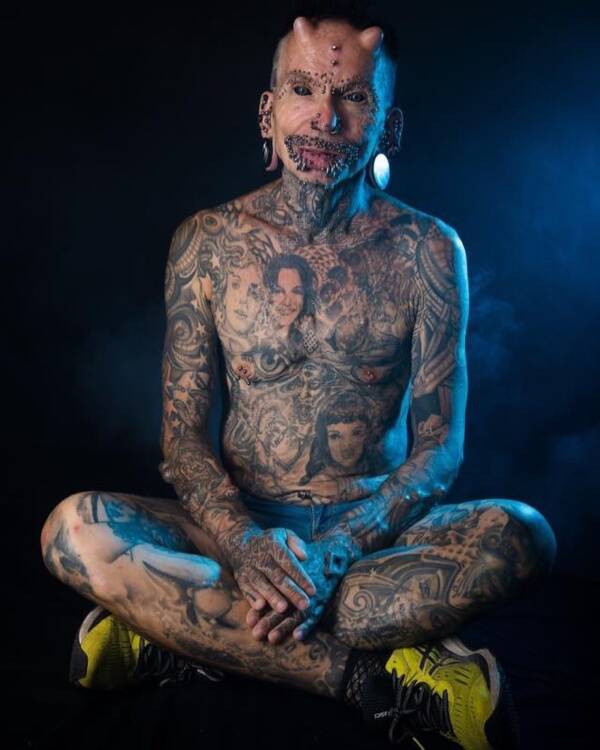 robuchholz/InstagramIn 2014, Rolf Buchholz was turned away from a Dubai airport because of his appearance.

Buchholz, who is a telecommunications worker, has also gotten 278 penis piercings, according to Mirror. He has said that the piercings have not negatively impacted his sex life. “It’s not a problem at all,” he said. “I have had the piercings already so long, if there was a problem, I would have got rid of them already long ago.”

Funnily enough, out of all of his extreme procedures, Buchholz said the most painful experience was his palm tattoo. “It really hurts,” he said of his palms, which are both covered in intricate tattoos. “I have no high pain tolerance.”

In 2012, Buchholz secured another record to his name: the most body modifications. And since then, his tally has only gone up. He now boasts at least 516 modifications. 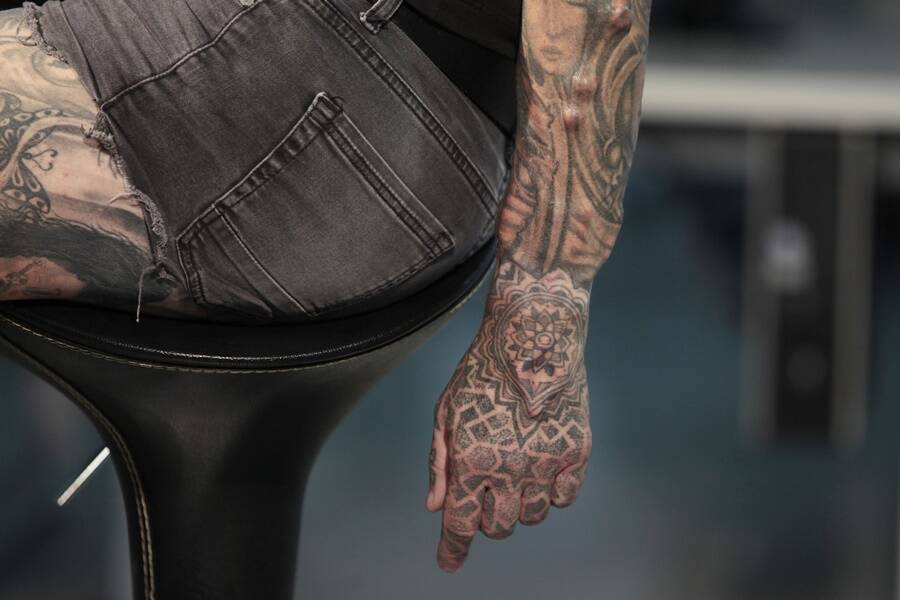 The man with the drastically altered appearance then made headlines in 2014 when he was turned away from the Dubai airport, presumably because of his shocking look. Buchholz had traveled to the United Arab Emirates that year for a scheduled public appearance at a hotel in the nation’s capital, but he did not make it because of the hold-up at the airport.

A spokesman for the hotel where Buchholz was scheduled to appear said its management had failed “despite all its attempts” to win permission from authorities for him to enter the country.

Meanwhile, the extreme alterations to his appearance may shock others, but for Rolf Buchholz it’s no big deal.

“The body modifications have changed only the outside,” said Buchholz of his physique. “It’s changed not me. I’m the same person.”

Buchholz said he plans to make more modifications to his physique.

Buchholz is hardly the only person who has gained internet fame because of his severely-altered look. Valeria Lukyanova and Justin Jedlica have gained notoriety for their appearances as the real-life barbie and ken doll.

Jedlica, who is from New York, reportedly underwent 780 cosmetic procedures that cost over $800,000. It’s unknown how many procedures Lukyanova, a Moldovian character who has drawn criticism for her disturbing views about the appearances of people of mixed-race, undertook for her plastic look.

There was also Dennis Avner, also known as Stalking Cat, who rose to internet fame after he broke the world record for most body modifications made to make him resemble an animal. 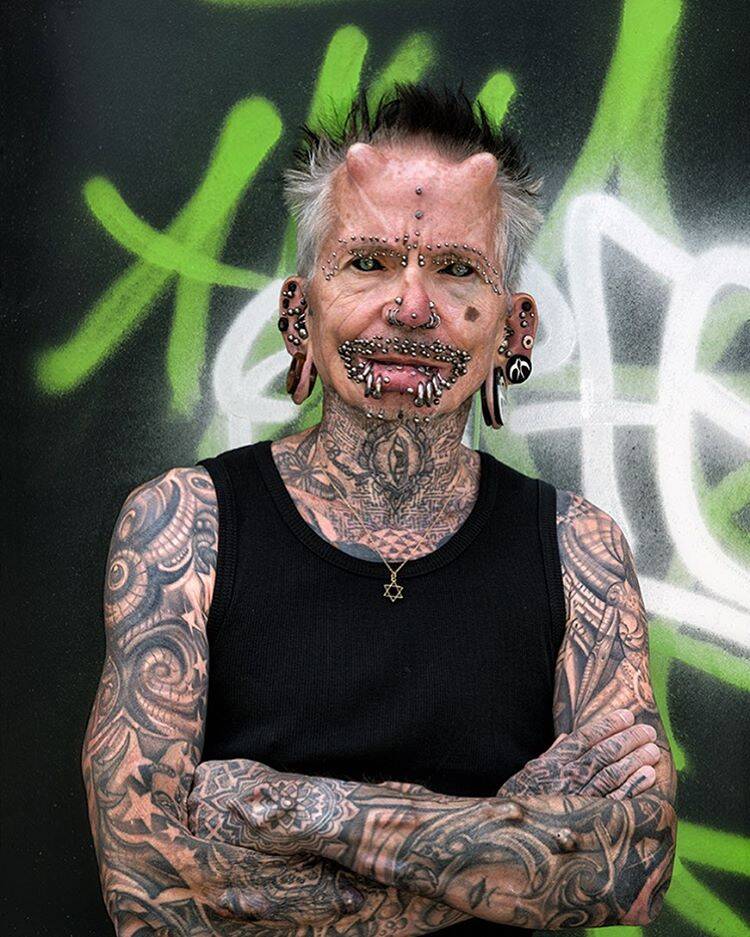 robuchholz/InstagramRolf Buchholz holds both records for most piercings and most body modifications, according to the Guinness World Records.

Avner underwent a number of procedures to look like a “tigress,” including bifurcation (the splitting of his upper lip), surgical ear pointing, and tooth sharpening. He sadly passed away in 2014 in an apparent suicide.

As for Rolf Buchholz, it seems he is not yet finished with his transformation and has said that he is still considering further modifications in the future.

Next, check out these mesmerizing works of elaborate body art. Then, meet Adam Curlykale, who tattooed his whole body — and had his nipples and genitals removed.