Dallas artist Steven Novak went all out to make this year's Halloween decorations as spooky as possible. No fog machines or cobwebs — just murder, blood, and guts. 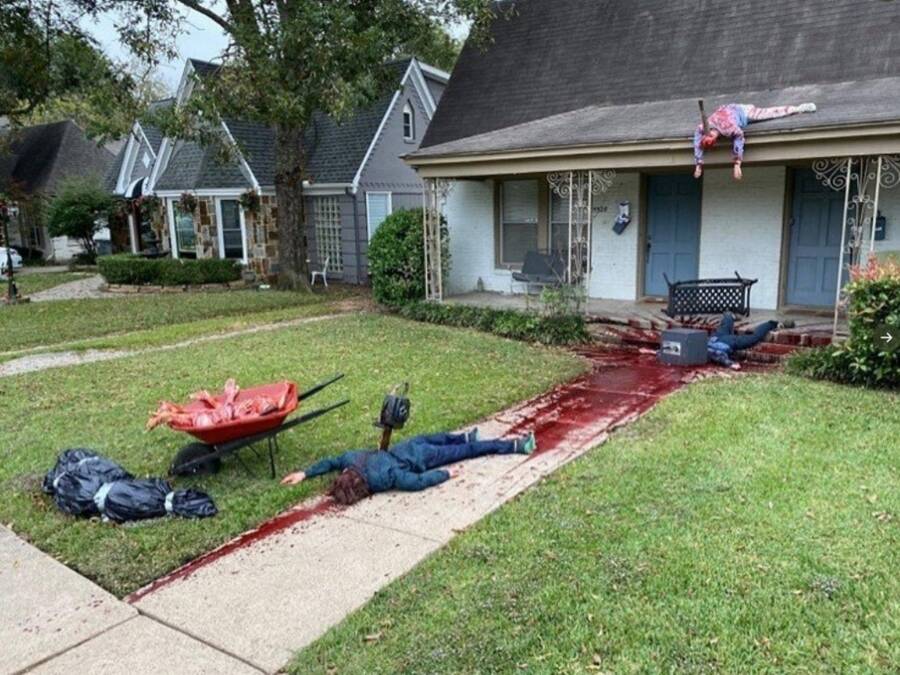 FacebookNeighbors genuinely believed that the stab victims and 20 gallons of blood were real.

Halloween is upon us, which means everyone is entitled to one good scare. While most of us are content to carve a few pumpkins and call it a day, Dallas artist Steven Novak made his home look so grisly that the cops have been called multiple times.

According to The Orlando Sentinel, Novak decked out his property with hyperrealistic figures that look like actual murder victims. One is slumped over the roof with a machete in its head. A wheelbarrow with bloody stumps sits abandoned on the lawn. Novak even projected a captive zombie horde in his window.

There was blood everywhere.

The artist had clearly outdone himself, as it was quite the scene — one that was sincerely mistaken for a murder scene by his neighbors. According to The Dallas Observer, the Dallas Police Department paid Novak a couple of visits. Fortunately, they recognized him as a creator instead of a killer.

“They were in formation at the door and when I opened it they asked me if it was all mine,” said Novak. “I asked, ‘You mean the blood and the bodies? Yeah, that’s me.'”

Novak was so preoccupied with making his work look realistic that he wasn’t even thinking about potential legal repercussions. At first, his neighbors’ responses to this sadistic scene were jovial remarks and casual compliments.

“It was raining a lot and washing the blood away so I indefatigably ‘watered’ the bodies every morning for a while to the dismay of early dog walkers and joggers saying as they passed ‘Watering the bodies!'” Novak said.

The resourceful artist had always been a tinkerer, particularly when it came to Halloween. With the COVID-19 pandemic in full effect, it was the perfect opportunity to let loose and reintroduce some fun.

“I’ve always been up to hijinks like flying ghosts or seven-foot tall snow sculptures of myself, so if I was gonna do Halloween, it was obvious that it should be hyperreal,” he said. “No lights, fog machine, or camp…something that would really freak people out walking by in the dark.”

“So I whipped up some dummies and slung 20 gallons of blood all over.” 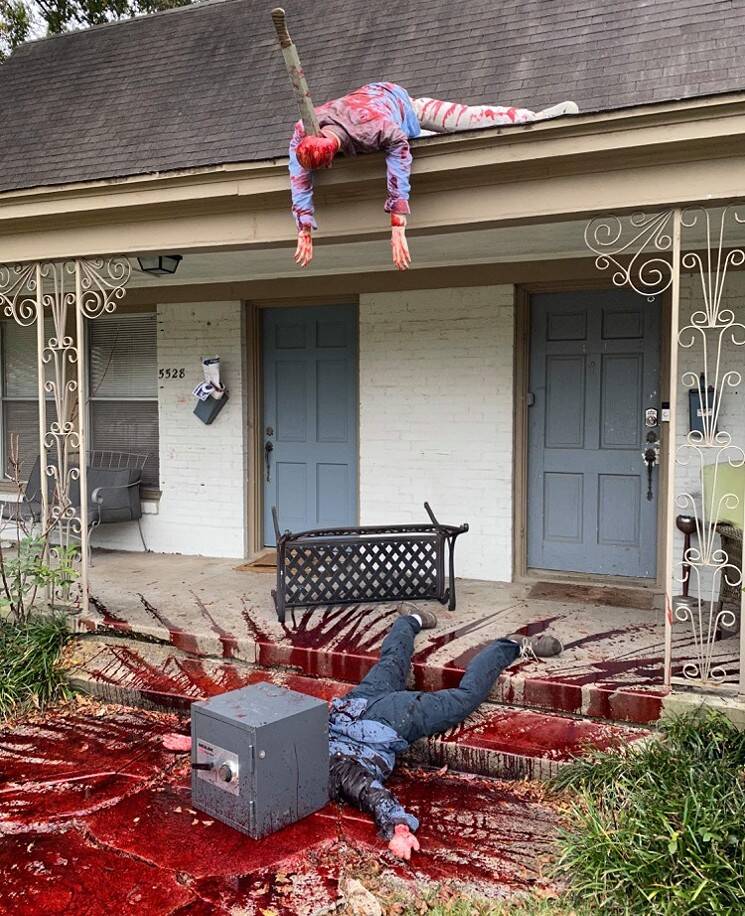 FacebookOne of the simulated victims had their head crushed, as another was stabbed in the skull while scampering across the roof.

Things rapidly took a turn, however. Some M Street residents alerted authorities to what they genuinely believed had been a series of gruesome homicides. To be fair, Novak’s work was extremely convincing. From pulverized heads to gallons of blood, it was a macabre sight.

“Neighbors told me cop cars were in front of my house a lot during the day,” said Novak. “I was only home twice to receive them. They told me they thought it was cool and that they were only there because they were required to reply to complaints from the sergeant.” 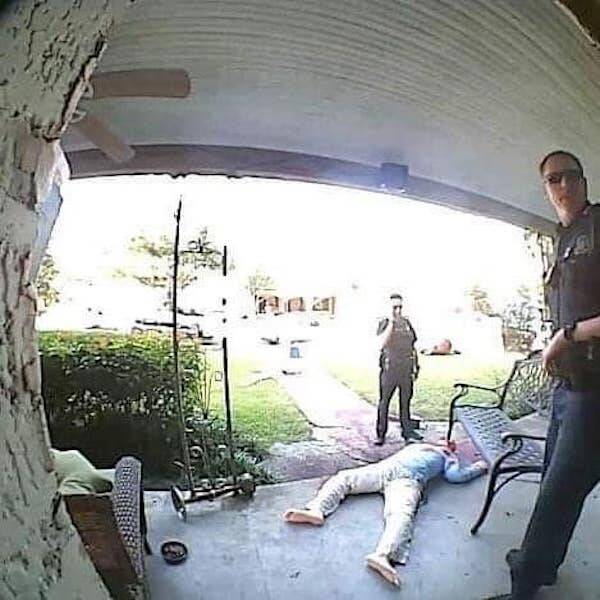 Ultimately, Novak’s work was generally received with the Halloween spirit he had hoped for. Despite the calamity that the simulated carnage temporarily spurred, he found support from the most important fans of all — kids.

“I’m most proud of the wheelbarrow tipped over by the street full of Hefty bags, looking like a failed attempt to dispose of the dismembered bodies in the middle of the night,” he said. “A kid walked by and asked me what happened to them; I said they ate too many Skittles.” 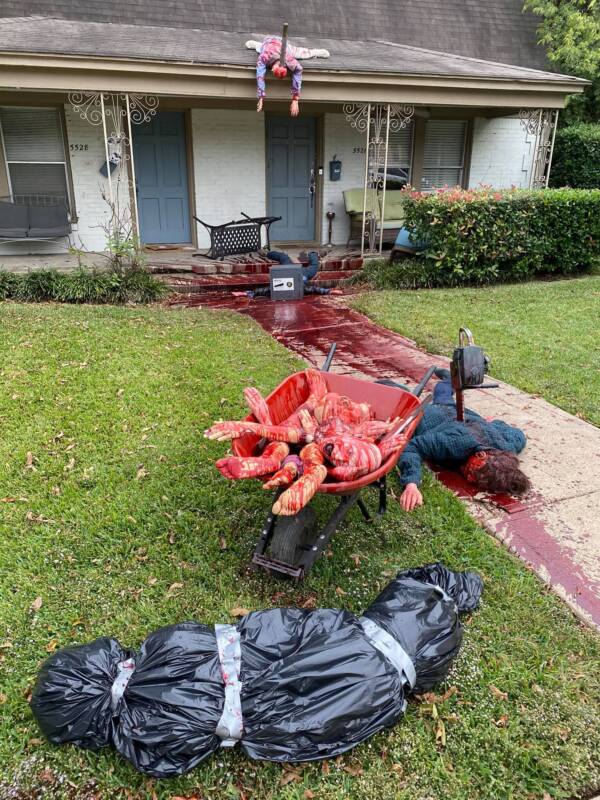 FacebookPerhaps most realistic was the makeshift bodybag — with the wheelbarrow of limbs close behind.

With Novak’s work yielding numerous police visits and having gone viral all over the internet, some would say he went about as far as one could legally go.

“Honestly, though, I think I could’ve used more,” said Novak. “[My plans] were way worse on paper. Next year, though!”

After reading about a Dallas man’s hyperrealistic Halloween decor resulting in an official police visit, check out 40 vintage Halloween costumes that will haunt your nightmares. Then, take a look at 12 spooky pictures of a New York City Halloween in the 1970s.