Meet Geraldine Ferraro, The First Woman To Run For Vice President On A Major Party Ticket

Discover the full story of Geraldine Ferraro, the New York congresswoman who made history as the first female vice presidential candidate in 1984.

On July 19, 1984, Geraldine Ferraro made history when she walked onto the stage at the Democratic National Convention in San Francisco. Ferraro, a congresswoman from Queens, New York, accepted the official nomination as a vice presidential candidate.

On the Democratic ticket with Walter Mondale, Ferraro ran with him against then-President Ronald Reagan and then-Vice President George H.W. Bush. At the time, Reagan was at the height of his popularity, so Mondale and Ferraro certainly had their work cut out for them.

While the election ended poorly for the Mondale-Ferraro campaign, Geraldine Ferraro’s nomination was a significant milestone in the progression of U.S. politics, which up until then had been mostly dominated by men. Ferraro was lauded for her performance as a vice presidential candidate and for being “comfortable with the boys.”

Her candidacy paved the way for more women with ambitions for higher office. The U.S. has since seen two other women receive the VP nomination for a major party, former Alaska Gov. Sarah Palin in 2008, and Sen. Kamala Harris in 2020. In between, the country saw former Secretary of State Hillary Clinton become the first and only woman to receive the presidential nomination by a major party in 2016.

By all accounts, Ferraro was a trailblazer. Let’s take a look at Geraldine Ferraro’s life — and how she forged a path for women in U.S. politics.

Who Was Geraldine Ferraro? 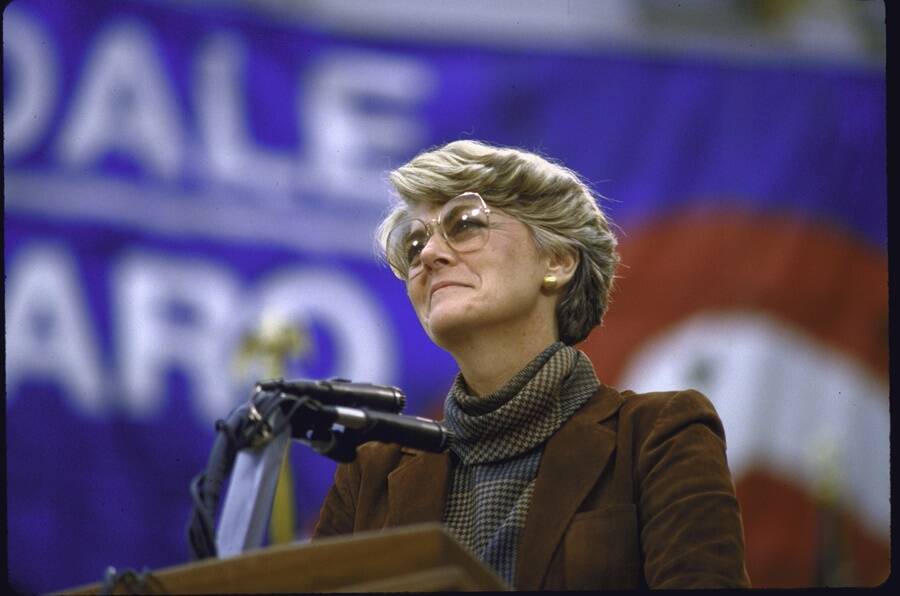 Diana Walker/The LIFE Images Collection via Getty ImagesBefore she made history as the first female vice presidential candidate, Geraldine Ferraro was a prosecutor and congresswoman from Queens, New York.

Geraldine Ferraro’s barrier-breaking vice presidential nomination will forever be etched into the history of U.S. politics. But before she became a Washington trailblazer, Geraldine Anne Ferraro was born in Newburgh, New York, on August 26, 1935 — in the midst of the Great Depression.

Ferraro, who often went by “Gerry,” was the daughter of Italian immigrants. Her father, Dominick Ferraro, died when she was young. So she was brought up by her mother, Antonetta, who raised the family in the South Bronx, working as a seamstress to make ends meet.

Eventually, her mother made enough money to send her only daughter and youngest child to the Marymount School, a Catholic boarding school in Tarrytown, New York.

Ferraro’s excellent grades enabled her to earn a scholarship to Marymount College in Tarrytown, from which she transferred to the New York City branch. After she graduated college with a degree in English, Geraldine Ferraro went on to become a public school teacher.

She attended law school at night and, as if a sign for what was to come, she was one of only two women in a class of 179 students. 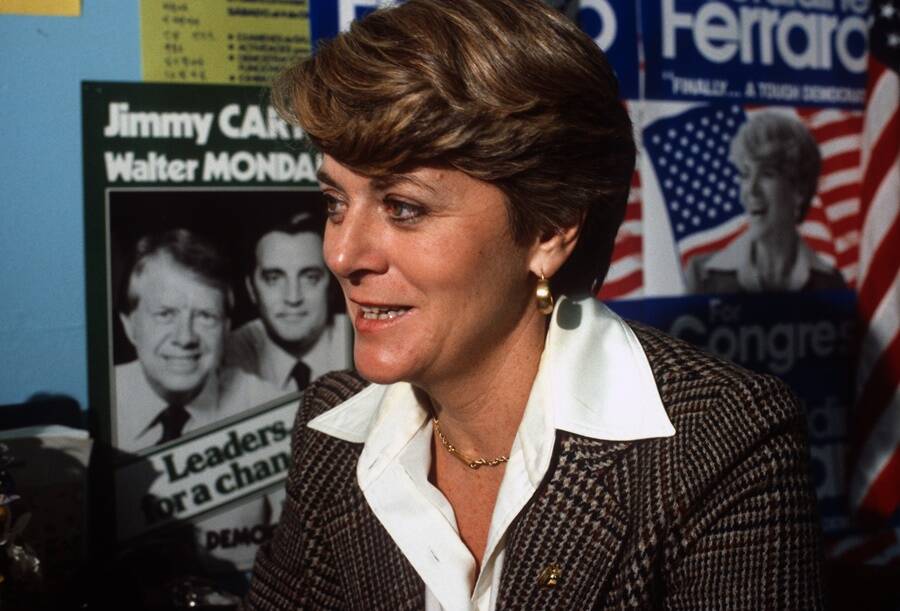 Santi Visalli/Getty ImagesFerraro had a reputation as a liberal feminist, but her legislative record sometimes teetered toward moderate views.

By the time Ferraro was looking for a job out of law school in the early 1960s, the world of corporate law was still largely unwelcoming to women. She dedicated herself to raising a family with her husband while doing some pro bono work for women in Family Court. She also dabbled in local politics.

By the 1970s, Ferraro had returned to the workforce. She applied for a job at the Queens district attorney’s office, where her cousin had been newly appointed as its head. She was hired as an assistant district attorney in charge of a special victims bureau, where she handled various cases related to rape, child abuse, and domestic violence.

Ferraro credited her time at the special victims bureau for the change in her political views, going from moderate to more liberal. But after years of emotionally draining work as well as unequal pay at the district attorney’s office, she left her job in 1978.

Geraldine Ferraro’s departure led to her next endeavor: Congress.

In 1978, Geraldine Ferraro was elected to the U.S. House of Representatives from New York’s Ninth Congressional District. But this win wasn’t easy.

In her first race, Ferraro went head-to-head against a Republican assemblyman named Alfred A. DelliBovi. She won by just 10 percentage points, helped by her “law and order” background and support from the local Democratic establishment.

Geraldine Ferraro grew through the political ranks in her new position as a U.S. Congresswoman. She garnered a crucial ally in then-House speaker, Thomas P. O’Neill Jr.

She also became involved in important legislation, such as the Economic Equity Act in 1981, which was meant to reform pension options for women, protect the rights of widows and divorcées, and allow homemakers to save as much as their working spouses in individual retirement accounts.

“If a woman can be Vice President of the U.S., what job is there that a woman cannot do?”

Geraldine Ferraro earned a reputation as a no-nonsense congresswoman with a progressive legislative record. Yet, her pragmatic, white-bread persona was seen as less “threatening” compared to other firebrand politicians of the time, such as Bella Abzug and Shirley Chisholm. This was thought to make her more appealing to conservatives.

“You look at her and you can imagine her as your best friend, as your sister, as your member of Congress, as somebody you want to listen to,” said Joan McLean, a U.S. House staffer who supported Ferraro’s vice presidential nomination. “She has a profile that many women voters have.” 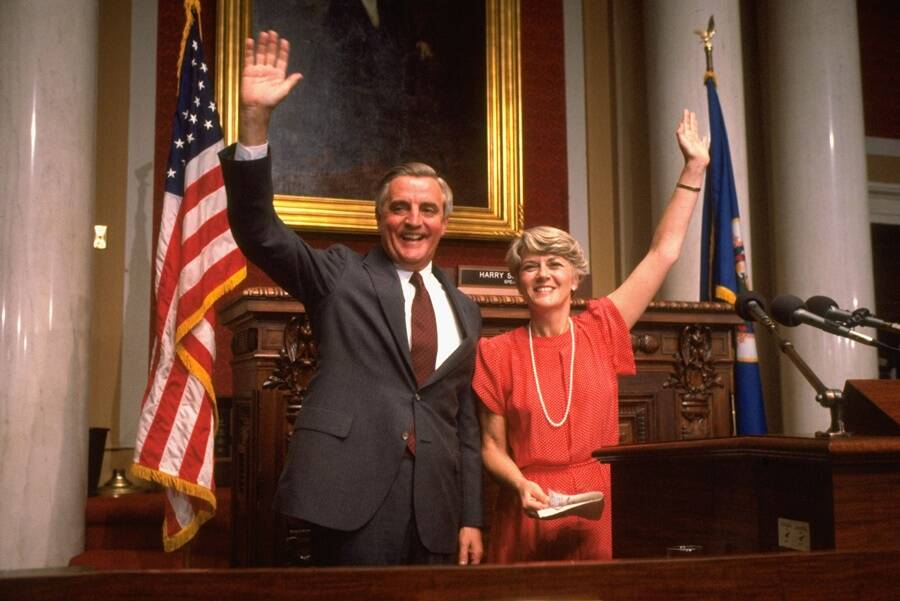 Diana Walker/The LIFE Images Collection via Getty ImagesGeraldine Ferraro was selected among a number of female elected officials who were considered to be the running mate of presidential candidate Walter F. Mondale.

Ferraro was a shoo-in as a potential running mate for former Vice President Walter F. Mondale, whose campaign wanted to use the “gender gap” between men and women to their advantage.

They hoped that choosing a woman as Mondale’s vice presidential running mate would help the Democratic candidate beat out Ronald Reagan, the famously popular Republican who was president at the time. Though electing a female vice president would be tremendously difficult, it also seemed like an exciting opportunity.

And so in 1984, Geraldine A. Ferraro made history when she accepted the Democratic nomination — and set her sights on becoming America’s first female vice president.

She Suffered A Devastating Loss 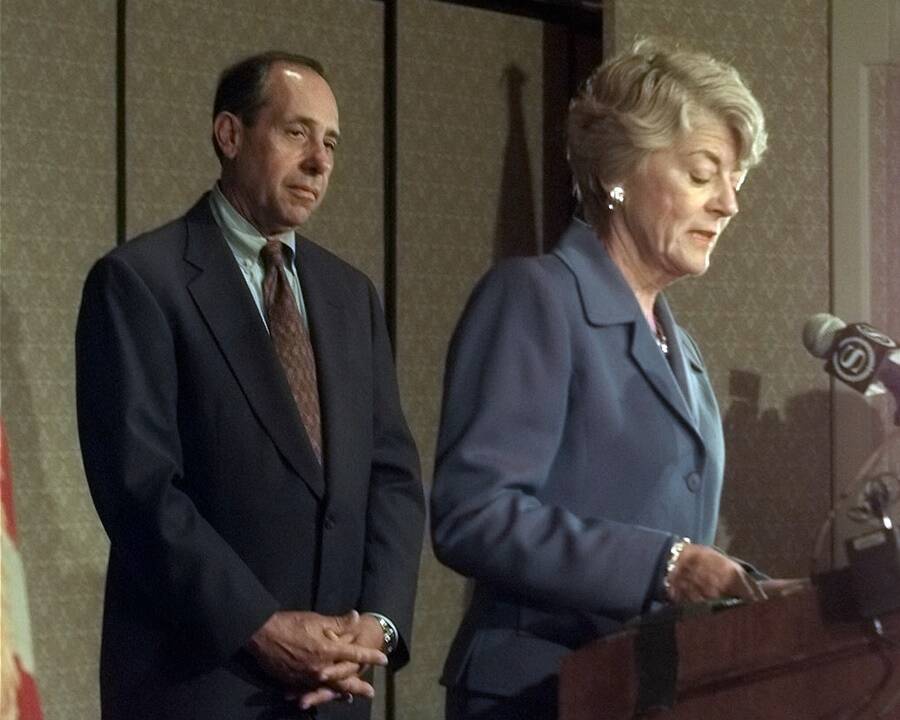 Bill Turnbull/NY Daily News Archive via Getty ImagesFerraro’s relative inexperience and the controversy around her husband’s finances were blamed for Mondale’s loss.

During the mid-1980s, conditions for women in politics were bleak. Only 24 of the 535 voting members of U.S. Congress were women, and no governors were women. The idea of electing a female vice president seemed remarkably ambitious to say the least.

Like many female politicians, Ferraro was unfairly targeted in the media and arguably faced more scrutiny than her running mate. She struggled to convince voters that she could be the first female vice president. And the sexism she faced on the trail was witnessed up close by Mondale.

“We went down to Mississippi, and some old farmer said, ‘Young lady, do you make good blueberry muffins?’ And she said, ‘Yes. Do you?’ That was the kind of thing that she was bumping up against,” Mondale recalled.

“She had to keep her cool. She had to be nice about it. And yet she was undergoing a revolution. It wasn’t just automatic. It was her guts and her vision and the depth of her beliefs that helped her get it done.”

Ferraro’s fiery response to condescending remarks made by Bush during their debate earned her high marks among political observers.

Damaging reports about the finances of Ferraro’s husband, John Zaccaro, also weighed on her campaign. And since she was Italian American, some news reports even attempted to link her to organized crime in New York.

Considering all these factors, it’s not that surprising that Ferraro failed to become the first female vice president. However, she still won praise for her performance as a candidate. One of her best moments came during her highly-televised debate against Bush.

The congresswoman, who endured criticism for what was perceived as her lack of experience for the White House position, pushed back against Bush’s condescending remarks during their debate:

“I almost resent, Vice President Bush, your patronizing attitude that you have to teach me about foreign policy. I have been a member of Congress for six years… Secondly, please don’t categorize my answers either. Leave the interpretation of my answers to the American people who are watching this debate.”

After her 1984 election loss, Ferraro ran for Senate twice but lost both races. She ultimately went on to become a United Nations Human Rights Commission ambassador.

In 2008, she campaigned for presidential candidate Hillary Clinton, who has spoken about the impact of Ferraro’s legacy.

“We owe her so much,” Clinton said. “She inspired us women and girls. All of us thought new thoughts and imagined new possibilities because of Gerry.” 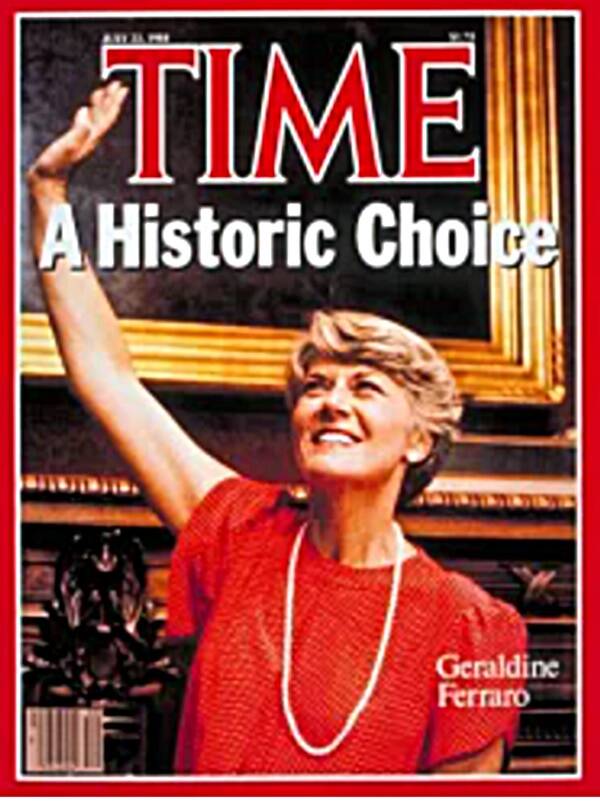 TIMEFerraro’s historic achievement as the first woman nominated for VP in 1984 paved the way for other women.

Ferraro was active in Clinton’s campaign before she stepped back due to controversial comments she made about Barack Obama’s presidential candidacy. And while she didn’t hold elected office again, Ferraro continued to be an active figure in politics.

Ferraro died in Boston in 2011, due to complications of multiple myeloma, a blood cancer that she had been battling for over a decade. She was 75.

The Legacy Of Geraldine Ferraro 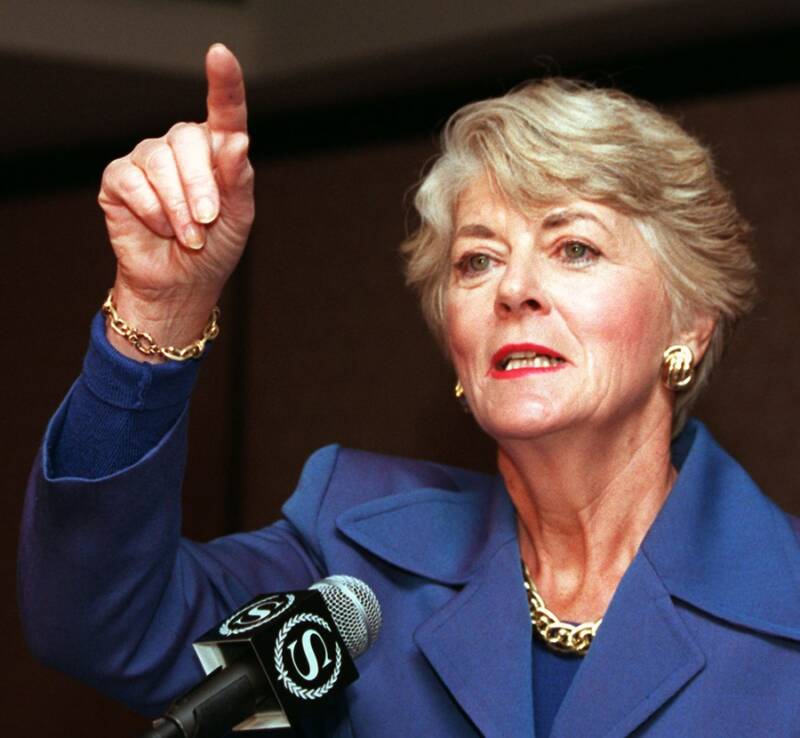 Geraldine Anne Ferraro may not have made it all the way to the White House, but her historic candidacy is still regarded as a significant milestone in terms of breaking barriers for women in U.S. politics. Ferraro paved the way for others to follow suit, a feat seen as challenging even today.

“Sixty-four years after women won the right to vote, a woman had removed the ‘men only’ sign from the White House door,” the New York Times wrote of the late congresswoman’s historic candidacy.

While there have been other women who have tried to become the first female vice president since Ferraro, it took 24 years for another woman to follow in her footsteps. In 2008, presidential candidate Sen. John McCain chose Alaska Gov. Sarah Palin as his running mate on the Republican ticket.

Twelve years after Palin, Sen. Kamala Harris was chosen as the VP candidate by former Vice President Joe Biden on the Democratic ticket.

Harris reached a couple of other milestones with her historic candidacy in 2020: She became the first Black woman and the first Asian American woman to receive the VP nomination from a major political party.

Despite the challenges that Geraldine Ferraro faced back in 1984, it’s undeniable that she left an impact on U.S. politics — and encouraged other women to follow their dreams of running for higher office.

As Ferraro herself once said: “Every time a woman runs, women win.”

After reading about Geraldine Ferraro, the first female vice presidential candidate, learn how Edith Wilson, the wife of U.S. President Woodrow Wilson, took on the duties of the president after her husband’s stroke. Then meet Jill Ruckelshaus, the progressive Republican who opposed her party to fight for women’s rights.