More than 400 penis pendants have been uncovered in England, but this is only the second found that was made from silver, leading experts to declare it a "national treasure." 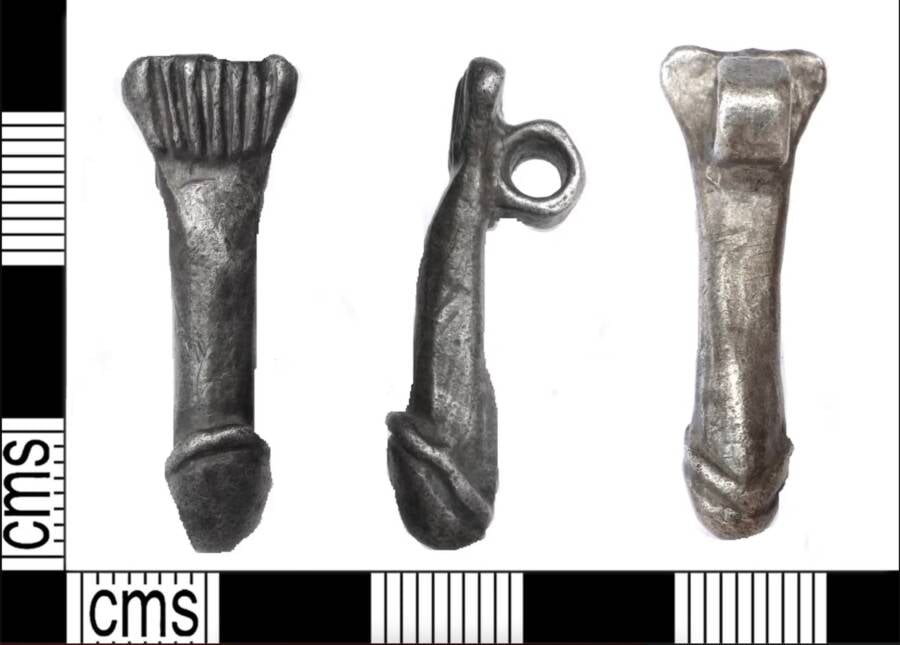 Portable Antiquities SchemePendants like these were worn by soldiers in battle and by children to ward off bad luck.

Recreational metal detectorist Wendy Thompson spent the last day of 2020 combing a Higham farm near Gravesend and Strood in Kent, England. The 73-year-old retired estate agent didn’t expect to make history by shoveling into one particularly promising piece of dirt — until she found a 2,000-year-old penis pendant.

According to The Independent, the silver artifact was only 1.2 inches long and weighed a mere 0.3 ounces. It was dated to between 43 and 410 A.D. and classified as a national treasure after an inquest at County Hall in Maidstone. It was not only attributed to ancient Rome but shed light on their phallus-centric beliefs.

“The last person to hold that was back in that era,” Thompson said. “It’s a long, long time that it’s been lying in the ground waiting for me to come along and find it.”

According to LiveScience, Roman soldiers marching into battle wore penis amulets to protect them from the enemy. Parents accessorized their children with such pendants to ward off “the evil eye” — a personification of bad luck.

Thompson was in utter awe as the pendant is only the second silver penis amulet of its kind ever found in the U.K. 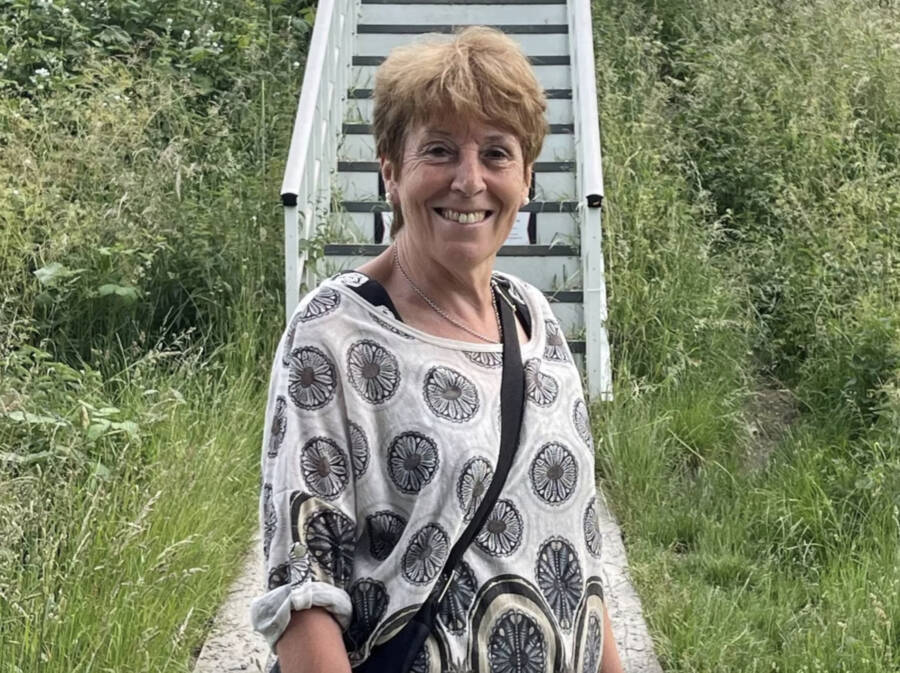 Wendy ThompsonWendy Thompson plans to split her share of the treasure with the owner of the farm she found it in.

“It was only a tiny thing really,” said Thompson. “We were just as normal, covering a field up and down with a metal detector. I turned over this spade of earth and there it was, about eight inches down, I guess. I thought it was about 2,000 years old and it was.”

While an exact date has yet to be determined, a report by the British Museum noted the pendant’s phallic design “points to the Roman era.” During the recent inquest, Coroner Roger Hatch detailed the artifact’s visible “foreskin, shaft and pubes” of the artifact.

A litany of rediscovered Roman art has long suggested phallic imagery was a sign of virility, power, and good luck. According to Ancient Origins, it reaffirmed man’s dominance over anyone deemed inferior — from girls and women to boys and slaves. It was also linked to the worship of male gods like Hephaestus and Dionysus.

Roman philosopher Pliny the Elder himself had written about the fascinus or fascinum, which Roman religion deemed the physical embodiment of divine male strength. Children wore such amulets around their necks to protect them from illness or misfortune, while soldiers hoped these would help them prevail during warfare. 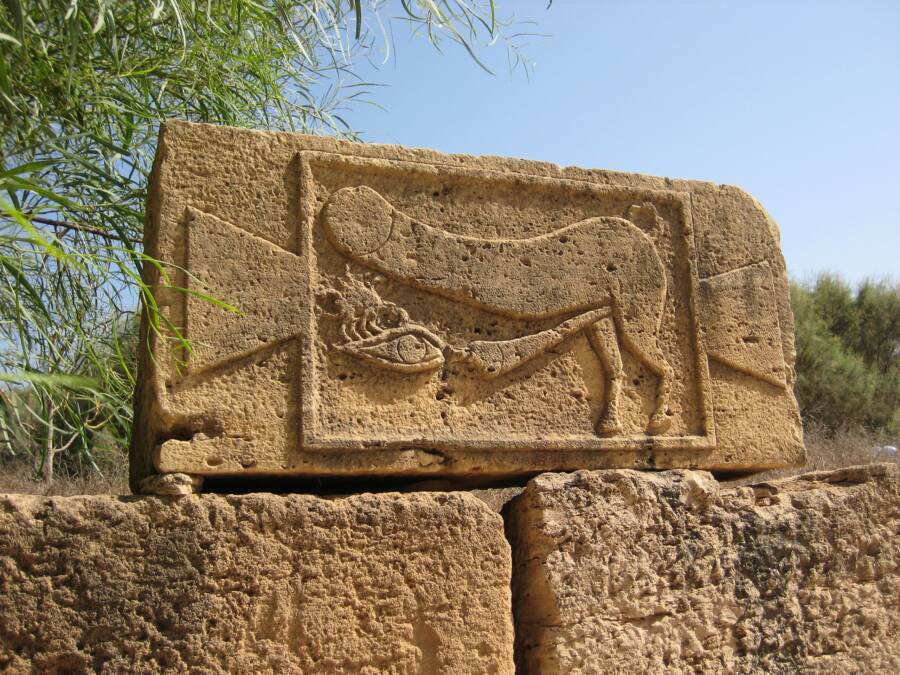 Wikimedia CommonsA legged phallus from the Roman era ejaculating into an evil eye discovered in Libya.

“Infants are under the especial guardianship of the god Fascinus, the protector, not of infants only, but of generals as well,” wrote Pliny, according to Ancient Origins. “It is the image of this divinity that is attached beneath the triumphant car of the victorious general, protecting him, like some attendant physician, against the effects of envy.”

The material of this particular pendant suggested that its owner had already overcome a fair amount of bad luck. Only one other silver penis pendant unearthed in the U.K. was crafted from silver, with the other 450 made of more affordable copper or bronze. For Newcastle University research coordinator Rob Collins, that said a lot.

“The choice of silver as a material can be for many reasons, one of which is simply because the wearer could afford it and the pendant then also becomes an object of display,” he said. “However, I suspect that silver also has magical properties or affiliations associated with is as a material.”

The British Museum explained that this pendant likely depicted a “flaccid macrophallus” to symbolize “a lack of control and an almost barbaric sexuality” rather than an erect penis, which signified the hubris and strength to defeat the evil eye of bad luck. The museum also noted a link between phallic imagery and military sites like Hadrian’s wall. 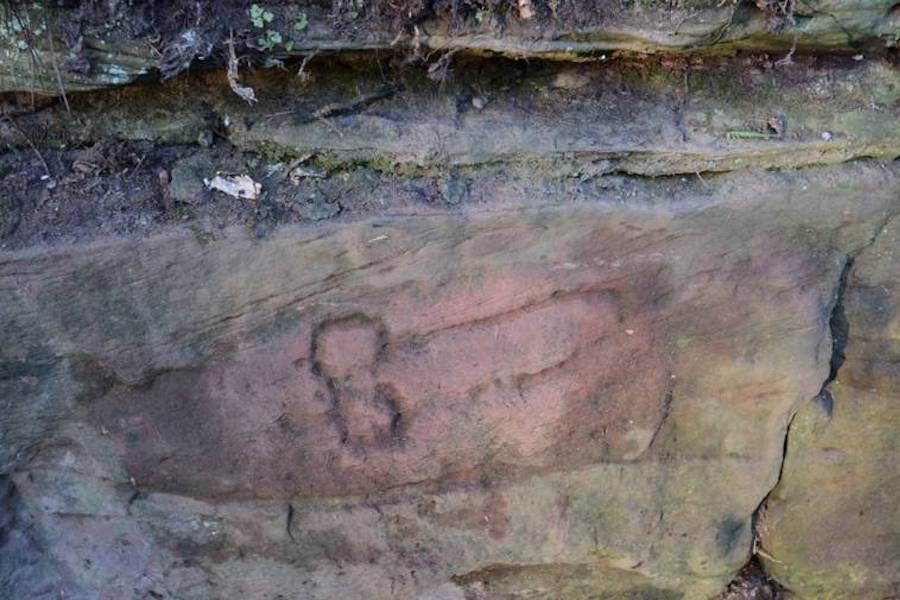 Newcastle UniversityOne of the many penis carvings at Hadrian’s Wall.

“Being a higher-quality metal than copper-alloy, silver may have been thought to strengthen the phallus’ protective abilities,” said Lori Rogerson, a finds liaison officer with the Portable Antiquities Scheme.

“We know that children were protected by these apotropaic devices, and the archaeological evidence suggests their use in Britain was very popular within the Roman army.”

Thompson herself was forced to part with the pendant as per British law that required metal detectorists to report their discoveries within 14 days. While a financial evaluation of the artifact has yet to be concluded, Thompson isn’t in it for the money — but plans to split her share with the unwittingly lucky farm owner.

“I’m not after the money but it is nice to see it sold for its value,” said Thompson. “I don’t find things because they are valuable, it’s because of the history and you know that somebody once had that object. It’s magical really.”

After reading about the Roman penis pendant unearthed in England, learn about the rare 14th-century leopard coin found in England. Then, read about the Iowa teen who found a 34,000-year-old mastodon jaw.