For years, Lynyrd Skynyrd frontman Ronnie Van Zant claimed he would die before 30. Then when he was still 29, he was killed in a brutal plane crash in the Mississippi woods. 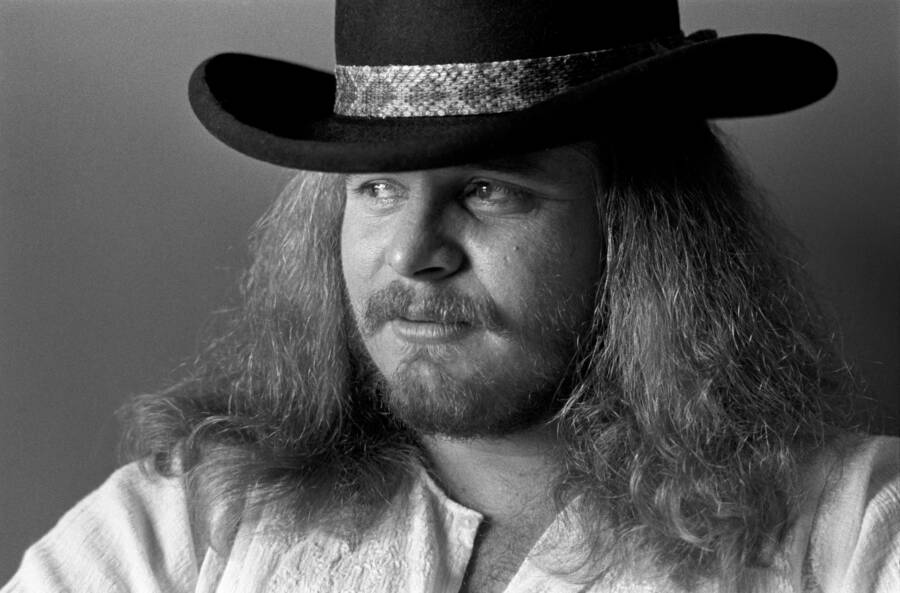 Tom Hill/Getty ImagesRonnie Van Zant, a little over a year before the Lynyrd Skynyrd plane crash that killed him and several members of his band.

Ronnie Van Zant always had a feeling that he’d die young. The Lynyrd Skynyrd frontman mentioned his premonition to multiple people, even telling a bandmate in Tokyo that he wouldn’t live to see 30. Then, 87 days before his 30th birthday, Van Zant died in a shocking plane crash.

Up until that point, however, Van Zant and his bandmates seemed to be at the peak of greatness, releasing smash hits like “Free Bird” and “Sweet Home Alabama.” And by the time Van Zant and the rest of Lynyrd Skynyrd boarded the band’s plane on Oct. 20, 1977, they were fresh off the release of their fifth album.

But triumph turned to tragedy on that October night when the band’s plane ran into engine trouble over Mississippi. The aircraft’s tragic crash would end the life of Ronnie Van Zant and several others on board — but, against all odds, Lynyrd Skynyrd would survive.

The Rise Of Ronnie Van Zant And Lynyrd Skynyrd

Born on January 15, 1948, in Jacksonville, Florida, Ronald Wayne Van Zant didn’t drift toward life as a musician right away. According to the official Lynyrd Skynyrd website, his first passions were fishing and playing baseball.

“I went as far as playing American Legion ball,” Ronnie Van Zant said, according to the site. “The next step would have been AA. I played center field. I had the highest batting average in the league one year and a good arm. You’ve got to have a good arm to play outfield.”

But Van Zant’s love of baseball ended up leading him somewhere else — to music. According to the Lynyrd Skynyrd documentary If I Leave Here Tomorrow: A Film, Van Zant hit his future drummer, Bob Burns, with a line drive during a high school baseball game.

“I think it’s funny as hell!” Van Zant allegedly told Burns’ friend, future Lynyrd Skynyrd guitarist Gary Rossington. Burns, for his part, recalled that Van Zant’s line drive “caught me behind the shoulder blades and took out every breath I ever had my whole life.”

Burns was bruised, but his pride wasn’t, and the three started jamming together. They soon recruited guitarist Allen Collins and, in 1964, dubbed their band “My Backyard.” My Backyard became Wildcats, the Sons of Satan, Conqueror Worm, the Pretty Ones, and the One Percent.

Then, in 1969, it became Lynyrd Skynyrd. If I Leave Here Tomorrow: A Film explains that the band’s name came from two places: Rossington’s high school coach, Leonard Skinner, a stickler for enforcing the school’s rules about hair length, and a lyric from Allen Sherman’s 1963 novelty song “Hello Muddah, Hello Fadduh.” 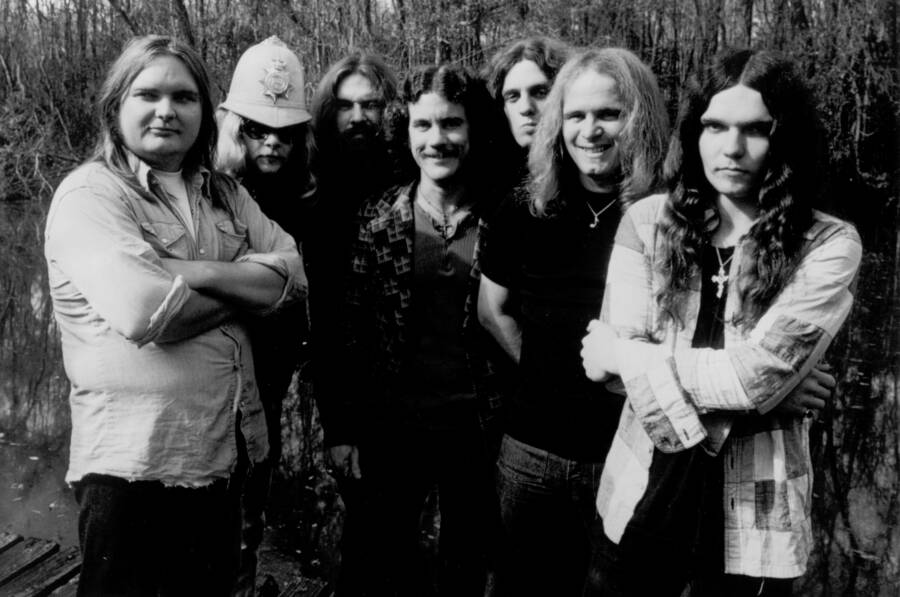 From there, Lynyrd Skynyrd — with the addition of members like Larry Junstrom and Leon Wilkeson on bass — started its ascent to rock n’ roll greatness. Determined to whip his fellow members into shape, Van Zant brought the band to a Florida shack with no air conditioning called the “Hell House” and made them practice.

Fueled by drugs, ambition, and the frequent outbreak of violence, Lynyrd Skynyrd started to claw its way to the top. The band produced their debut album (Pronounced ‘Lĕh-‘nérd ‘Skin-‘nérd) in 1973 and soon caught the world’s attention with hits like “Sweet Home Alabama.”

After releasing their fifth album, Street Survivors, on Oct. 17, 1977, Ronnie Van Zant and his band seemed unstoppable. But three days later, on October 20, a devastating plane crash would change everything.

The Frontman’s Death In The Lynyrd Skynyrd Plane Crash 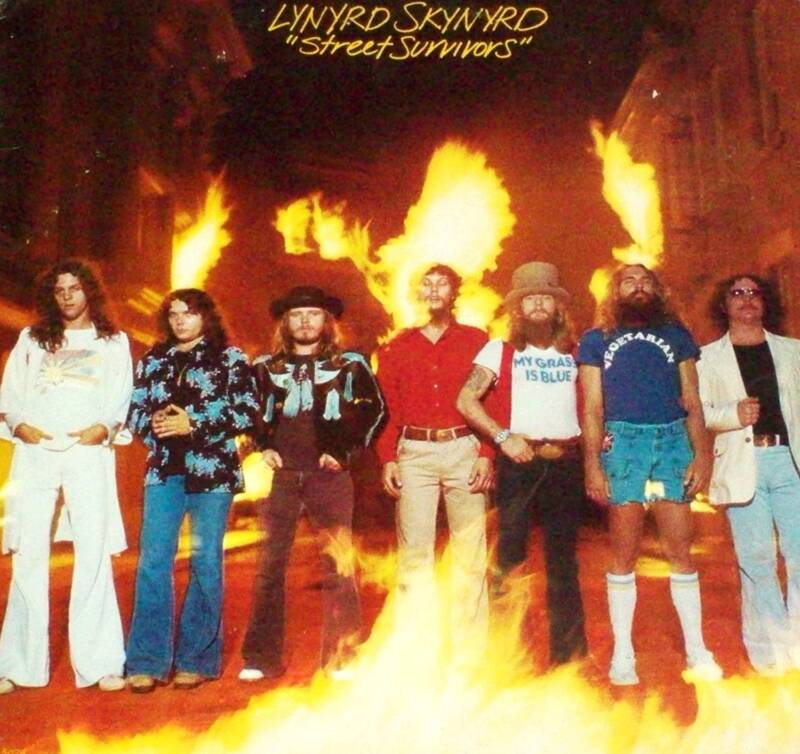 TwitterThe album cover for Lynyrd Skynyrd’s fifth album, which featured flames and Ronnie Van Zant with his eyes closed, was later changed because it was considered too evocative of the plane crash.

On Oct. 20, 1977, the day of Lynyrd Skynyrd’s flight from Greenville, South Carolina, to Baton Rouge, Louisiana, almost everyone had a bad feeling about the plane. According to Rolling Stone, the band’s manager Peter Rudge had bought the nearly 30-year-old Convair 240 out of necessity because the group caused too much trouble on commercial flights.

But the band members didn’t like it — especially since one of the engines had caught on fire on October 18, at 12,000 feet.

“Our wives, everyone were afraid for us to get on this thing, but we didn’t know any better,” keyboardist Billy Powell told VH1’s Behind the Music, as reported by Rolling Stone.

Gary Rossington also remembered that Allen Collins didn’t want to get on board, telling the Orlando Sentinel, “[Collins] didn’t want to get on that plane. He said, ‘I’m not gonna get on it because it’s not right.'” But Rossington recalls a different reaction from Ronnie Van Zant, who seemed less perturbed than the others about their rickety plane. 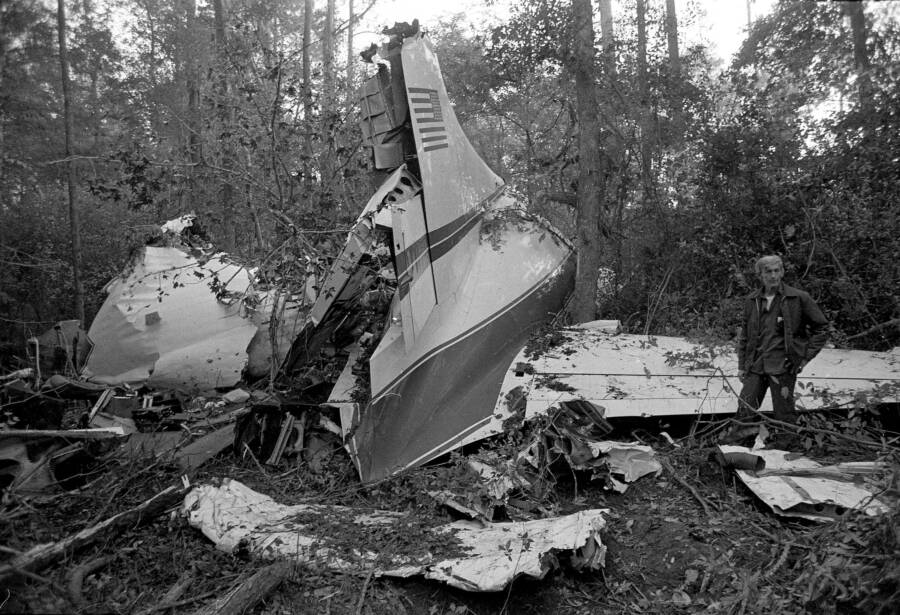 TwitterThe scene of the plane crash that killed Ronnie Van Zant and several other passengers on board.

At 5:02 p.m., the plane took off in Greenville. The band relaxed, blasting music, playing poker, and enjoying the view. Van Zant, with a bad back, even lay on the floor as one of the backing vocalists gave him a massage. For almost two hours, they sailed through the sky.

Then, the plane’s right engine failed. And, then, the left engine did, too. The passengers grew quiet as the pilot explained the situation and the plane began to plummet through the sky. But different members remember different things about Ronnie Van Zant’s final moments.

Rolling Stone reports that the band’s security chief, Gene Odom, woke Van Zant and strapped him into a seat. But drummer Artimus Pyle remembered Van Zant retrieving a pillow from the back of the plane and shaking his hand. “Ronnie,” Pyle said, “knew that he was going to die.”

The others on board survived with critical injuries. And when reporters asked Powell soon after the crash if Lynyrd Skynyrd would continue to perform, the keyboardist tersely replied, “I don’t think so.”

The Rebirth Of Lynyrd Skynyrd

In the aftermath of the Lynyrd Skynyrd plane crash, an investigation by the National Transportation Safety Board found that the fatal crash had been due to “fuel exhaustion” as well as pilot error. But Ronnie Van Zant’s death, and the deaths of others on board, didn’t spell the end of Lynyrd Skynyrd as Powell predicted.

In 1987, the band reformed with many of its original members — this time, with Van Zant’s younger brother Johnny singing lead vocals.

“I never thought I would be in Lynyrd Skynyrd,” Johnny Van Zant told USA Today. “I remember seeing the band rehearse and play, and going, ‘Wow, I want to do that one day’ – and here I am!”

Having played in his brother’s place for over three decades, Johnny Van Zant remarked: “[W]e don’t know what path God’s going to lead us down and what our mortality is, but I’ve got a lot of things to live for.”

In that way, Ronnie Van Zant lives on. He may have died young back in 1977, but his music, and his band, continue with a life of their own.

After reading about Ronnie Van Zant and his shocking death in the Lynyrd Skynyrd plane crash, see how musicians Patsy Cline and Buddy Holly met the same fate.