What Is A Rube Goldberg Machine? (Hint: You’ve Seen One Before) [VIDEO]

The illustrator said his cartoons of the Rube Goldberg Machine were a “symbol of man’s capacity for exerting maximum effort to accomplish minimal results.”

Joseph Herscher is a Brooklyn-based artist who knows how to entertain.

His video entitled The Page Turner has more than nine million views after seven years, and it’s easy to see why.

All Herscher has to do is flick his wrist to make it to the next page of a newspaper.

But where’s the fun in that?

An elaborate combination of a coffee cup, dropping weights, rolling balls, combustion, electrical appliances, gravity and even a pet gerbil combine to turn the page on Herscher’s paper in about two minutes. Rather than do things the normal way, the artist decided to build an awesome machine that takes basic physics to an entirely different level that would make his high school physics teacher proud.

A Rube Goldberg machine relies on a series of chain reactions that perform complicated feats to perform a simple task.

Wikimedia Commons One of Rube Goldberg’s cartoons. Imagine bathing like this.

Rube Goldberg was an actual person. He was born Reuben Lucius Goldberg in San Francisco on July 4, 1883. He loved art as a teenager, but the young man attended the University of California at Berkeley (at his father’s urging) where he earned a degree in mining engineering.

Working in mines takes a lot of engineering prowess. His first post-graduate job was to map out sewer and water lines in San Francisco. Think of that video you just watched about Riga’s tree lighting. There seemed to be a lot of pipes involved in that design.

Goldberg gave up on mining and starting drawing cartoons for local papers, including the San Francisco Chronicle. His artistic eye landed him a job with the Evening Mail in New York.

The public loved Goldberg’s work. His drawings expanded to hundreds of papers across the United States in syndication. The artist even penned a movie in 1931 called Soup to Nuts. That film was the first appearance of the iconic trio known as Three Stooges.

Some of his illustrations even ended up in the Museum of Modern Art in New York. Before he died in 1970, Goldberg drew more than 50,000 cartoons over his lifetime. 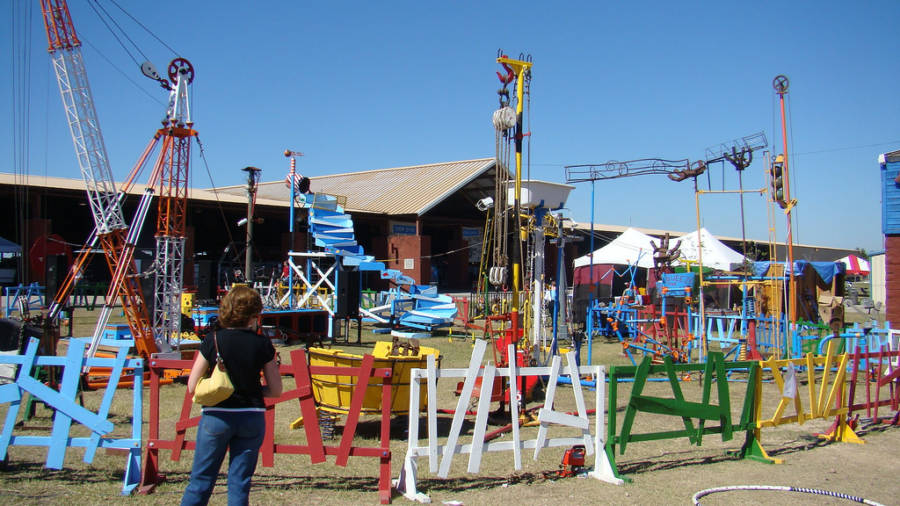 As Goldberg’s cartoons became more popular, people took designs off the page and into reality. Although a genuine Rube Goldberg machine has no practical use, they do teach kids and engineering students valuable lessons on how to build devices to get work done.

Drawing a Rube Goldberg machine is one thing, but building your own is another matter entirely.

YouTube user Kaplamino said it took him three months and more than 500 trials and errors before he perfected his creation. The blue marble chain reaction is made of ordinary, everyday items such as scissors, fidget spinners, small wood planks and a plastic fork. Follow the blue marble as it goes from one end of the table to the other, only to end up very near where it started.

Goldberg wanted to honor people with inventive minds every time he drew a silly cartoon. The illustrator said his work was a “symbol of man’s capacity for exerting maximum effort to accomplish minimal results.”

In today’s modern age Goldberg’s quote is truer than ever.

2018 marks the 30th anniversary of the official Rube Goldberg machine contest. The theme for 2018 is to pour a bowl of cereal, which is a take on a classic commercial for Cheerios.

The popularity of these crazy contraptions goes to an entirely different level if you don’t want to enter a contest yourself. Thanks to the internet and YouTube, you can see as many mind-bending and crazy Rube Goldberg machines as you can handle.

Enjoy this look at the Rube Goldberg Machine? Next read about the real Frankenstein experiments and the mad scientists behind them.Then learn about how Nazi scientist Wernher Von Braun sent the U.S. to the moon.