As commandant of Auschwitz from 1940 to 1943, Rudolf Franz Ferdinand Höss was single-handedly responsible for turning it into the Nazis’ largest death camp. 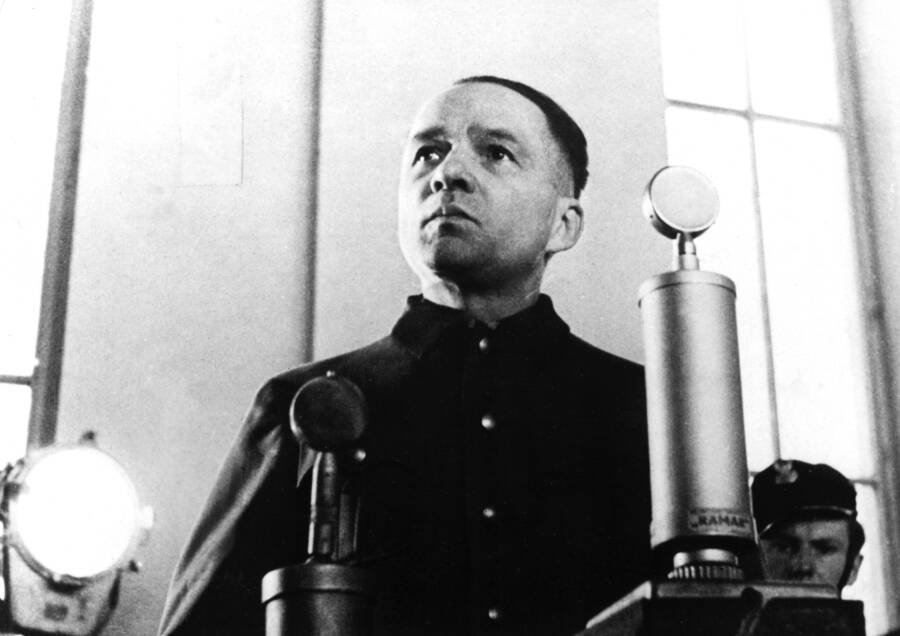 Keystone-France/Gamma-Keystone via Getty ImagesRudolf Höss during his trial in Warsaw, Poland, March 31, 1947.

In his testimony during the Nuremberg trials, Auschwitz commandant Rudolf Höss described his relief at finding an efficient way to kill. The deadly gas Zyklon B, he explained, “set my mind at rest, for the mass extermination of the Jews was to start soon… Now we had the gas, and we had established a procedure.”

A longtime Nazi, Höss took over Auschwitz in 1940. He immediately set out to obey his superiors, who had decided to resolve the “Jewish question” by ordering mass extermination.

Höss’s discovery of Zyklon B would accomplish this goal with devastating efficiency. And by the end of the war in 1945, he was killing as many as 2,000 people a day.

How Rudolf Höss Became A Nazi

Born on Nov. 25, 1900, in Baden-Baden, Germany, Rudolf Franz Ferdinand Höss (sometimes spelled Hoess or Höß) spent most of his childhood believing that he would be a priest. That’s what his strictly Catholic father wanted him to do, and Höss dutifully obeyed.

“I had been brought up by my parents to be respectful and obedient towards all grown-up people, and especially the elderly, regardless of their social status,” Höss later testified. “Whatever they said was always right.”

But when Höss’s father died around his 15th birthday, so did his ambition for his son’s priesthood. Free from obligation, Höss instead joined the German army and set out to fight in World War I.

There, he distinguished himself with both his bravery and youth. At 17, Höss became the army’s youngest non-commissioned officer and won the Iron Cross twice for his bravery in action.

However, Germany’s loss left Höss with a deep sense of betrayal. Like many other former soldiers, he joined the paramilitary Freikorps. And like many Germans, he drifted toward the right-wing politics that had emerged in the wake of World War I offering a reason for Germany’s defeat — Jews.

After seeing Adolf Hitler speak in Munich in 1922, Höss renounced his Catholicism and joined the Nazi Party. The following year, he seemed to prove his loyalty when he participated in the brutal murder of Walther Kadow, a teacher who Höss and others believed had betrayed Nazi member Leo Schlageter to the French occupation authorities.

Though he was sentenced to 10 years in prison, Höss was released in 1928 as part of a general amnesty deal. He met his wife, Hedwig Hensel, the following year.

But Höss met someone else in 1929 who would prove much more influential to his life — high-ranking Nazi Heinrich Himmler.

From The SS To Overseeing Auschwitz

By 1929, Adolf Hitler had appointed Heinrich Himmler to lead his fearsome security force, the SS, as Reichsführer. Himmler tapped Rudolf Höss to join. 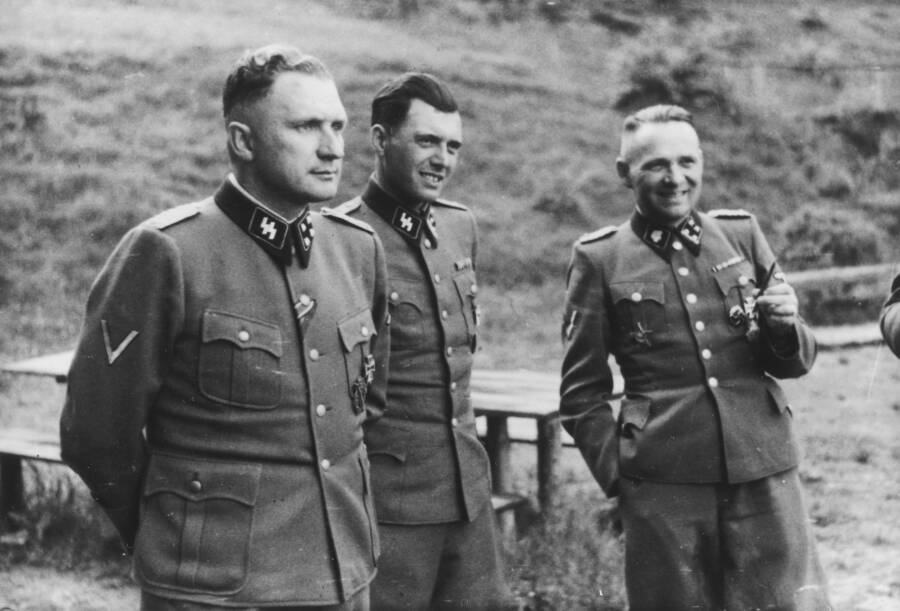 As an SS guard, Höss went to the Dachau concentration camp in 1934. At the time, Dachau was more of a “re-education” center than an extermination camp. But Höss’s experience there shaped him and informed how he would oversee Auschwitz just six years later.

“Anyone who shows even the slightest vestige of sympathy towards [the prisoners] must immediately vanish from our ranks,” thundered Theodor Eicke, the camp commandant. “I need only hard, totally committed SS men. There is no place among us for soft people.”

For Höss, watching the brutal beatings of the prisoners was difficult — but only at first. “At the beginning of the war, I attended my first execution, but it did not affect me nearly so much as witnessing that first corporal punishment,” he later recalled.

Eicke liked Höss, whom he recommended for a promotion. Höss went from assisting the commandant at the Sachsenhausen Concentration Camp to getting his own command post. In 1940, he was put in charge of Auschwitz.

By then, World War II had been raging for a year. And Himmler had chosen Auschwitz for a special purpose.

“In the summer of 1941, I cannot remember the exact date, I was suddenly summoned to the Reichsfuhrer,” Höss later testified. “Contrary to his usual custom, Himmler received me without his adjutant being present and said in effect: ‘The Fuhrer has ordered that the Jewish question be solved once and for all and that we, the SS, are to implement that order.'”

But Höss had a problem. He needed to kill people — thousands of them — and needed to do it efficiently. After visiting the Treblinka extermination camp, he criticized how its camp commandant used monoxide gas. “I did not think that his methods were very efficient,” he later said.

Instead, Rudolf Höss employed a gas called Zyklon B, a crystallized prussic acid. 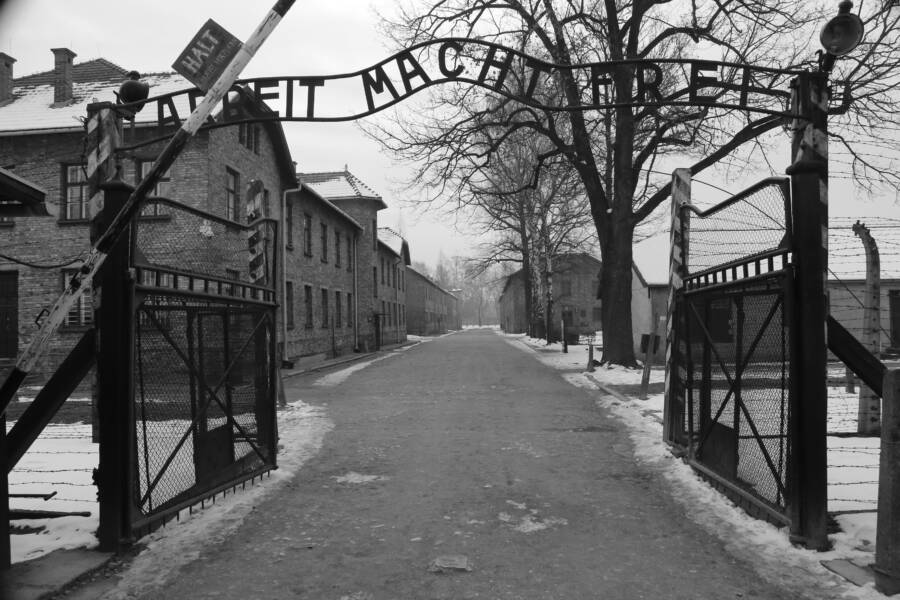 “Protected by a gas mask, I watched the killing myself,” Höss testified. “In the crowded cells, death came instantaneously the moment the Zyklon B was thrown in. A short, almost smothered cry, and it was all over.”

Sometimes, Höss claimed, he felt the weight of his terrible work. He had a “weakness” about killing children. But Nazi Adolf Eichmann assured him that it was for the greater good.

“[Eichmann] explained to me that it was especially the children who have to be killed first,” Höss later testified.

“Because where was the logic in killing a generation of older people and leaving alive a generation of young people who can be possible avengers of their parents and can constitute a new biological cell for the reemerging of this people?”

Before long, deaths at Auschwitz skyrocketed under Höss. With Zyklon B, the Nazi commandant could kill up to 2,000 people per day. An SS report in 1944 praised Höss as “a true pioneer in this area because of his new ideas and educational methods.” He is responsible for over 1 million murders.

Meanwhile, he lived an idyllic existence nearby with his wife and children. They could see the crematorium chimneys from their window, and Höss’s wife told the children to wash any vegetables from the garden because of falling ashes.

But by 1945, the war was coming to an end. Germany had lost. And Rudolf Höss went on the run.

After living briefly under an assumed name, Rudolf Höss was tracked down by Hanns Alexander, a German Jew who had fled Berlin during the Nazi rise to power. Höss was arrested and put on trial. 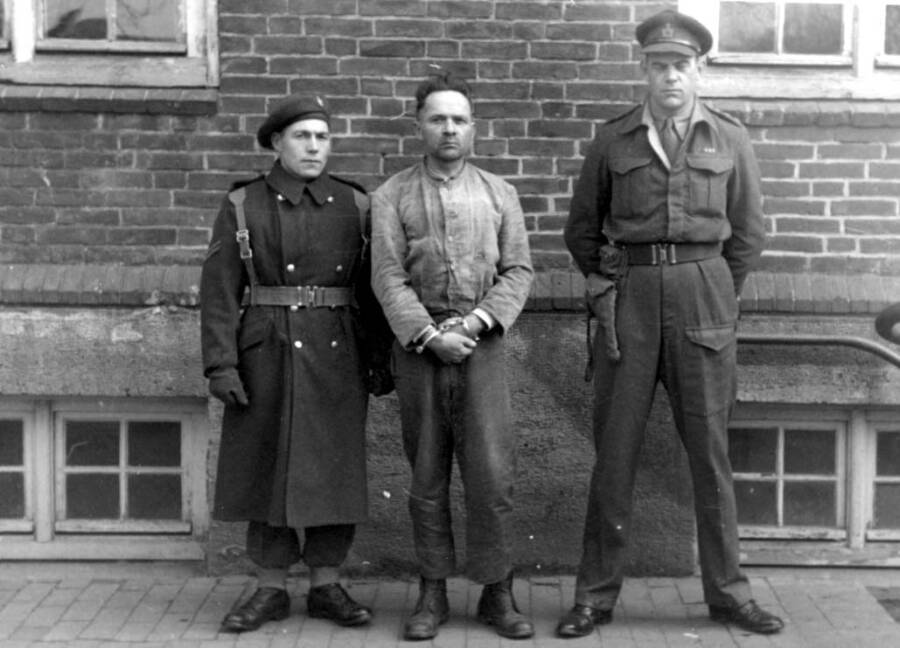 FlickrRudolf Höss was sentenced to death by hanging by a Polish court on April 2, 1947.

There, Höss struck Whitney Harris, the American prosecutor who interrogated him, as “normal” and even like a “grocery clerk.” Höss matter-of-factly described his work at Auschwitz and even inflated the number of people killed.

“Since he was to be labeled ‘the world’s supreme murderer’ in any case, he may have thought in his morbid mind to establish a record of mass killings never to be surpassed by any other man,” Harris later speculated.

Höss showed little remorse, although he did acknowledge that he felt “pity” for the victims. He stated that he’d just been following orders.

“It was certainly an extraordinary and monstrous order,” Höss testified. “Nevertheless the reasons behind the extermination program seemed to me right. I did not reflect on it at the time: I had been given an order, and I had to carry it out.

“Whether this mass extermination of the Jews was necessary or not was something on which I could not allow myself to form an opinion, for I lacked the necessary breadth of view.”

Ultimately, Rudolf Höss lived by his golden rule: “Only one thing is valid — orders.” Ignoring the devastating human cost of his work, Höss even boasted in his memoir that “by the will of the Reichsfuhrer-SS, Auschwitz became the greatest human extermination center of all time.”

Following his testimony, he was sentenced to death. Former prisoners at Auschwitz petitioned to the court to hang Höss at the camp, which was granted.

On April 14, 1947, the former Auschwitz commandant was brought back to Auschwitz. After a cup of coffee, guards led him to the gallows just before 10 a.m. There, Rudolf Höss was hanged, dying not far from where he’d sent millions to their deaths.

After reading about Rudolf Höss, look through these tragic portraits of Holocaust victims. Or, see the faces of Auschwitz guards kept in a new database.

Julia Marnin
Julia Marnin is a writer and journalist based in New York state who’s written for Newsweek, USA Today, Philadelphia Style magazine, and more. Her work has also been republished by outlets such as The Associated Press, where she has reported on election night votes for Super Tuesday and the presidential election in 2020. She earned a bachelor’s degree from The College of New Jersey and is interested in writing about a range of topics including history, World War II, true crime, human rights, and more.
You might also like
Remove Ads
×
Follow hu On