"What is the joke? That we're trying to help people get rid of diseases? We promote stopping alcohol consumption, drugs and fornication—is this laughable? ... Let them laugh and we will do our job." 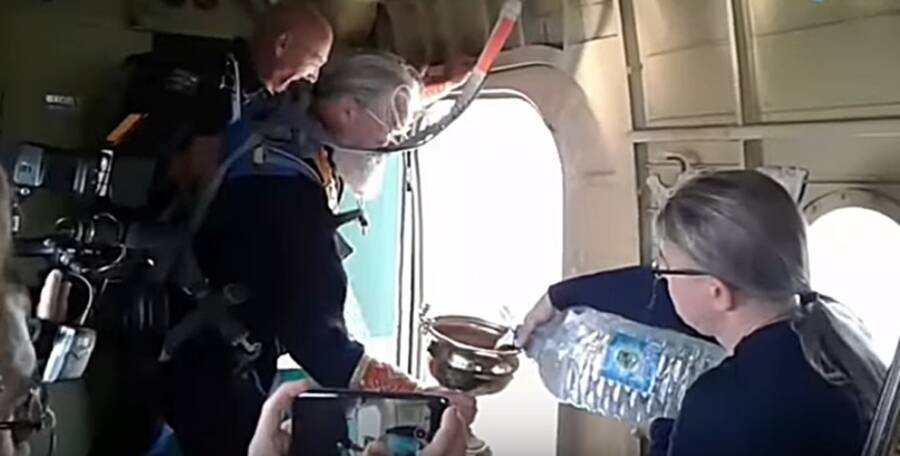 Vesti Tver/YouTubeLocal bishop Metropolitan Savva readies a goblet with holy water to pour out of an airplane and bless the Russian city of Tver.

Priests administering blessings with holy water is nothing new. But one Russian priest and his colleagues recently took that idea to the extreme.

As reported by Newsweek, Father Alexander Goryachev and Bishop Metropolitan Savva marked Russia’s unofficial Sobriety Day holiday on Sept. 11 by “cleansing” the city of Tver with 18 gallons of holy water.

And in hopes of achieving the most effective results, Savva poured the holy water over the city while he was strapped to an airplane flying between 650 and 980 feet above Tver.

Savva, who was joined by Goryache and two other clergymen on the flight, explained that this daring act was meant to “protect the city from the afflictions befalling it, from all accidents and social adversity.”

Their mission that day was to rid the city’s people of “drunkenness and fornication,” according to The Moscow Times.

The airborne blessing was captured on video and published by local news outlet Tver News.

Footage of the priests preparing to and then dumping the holy water over Tver.

This is not the priest’s first attempt at ridding people of addiction via flyover blessings.

Since 2006, Goryachev has been marking Sobriety Day — which has roots dating back to Russia’s tsarist era — by flying over Tver with the “Inexhaustible Chalice,” an icon of the Mother of God that Orthodox Christians believe can help cure those suffering from drug and alcohol abuse.

Another distinct feature of these creative blessings is that the holy water must be poured out through a chalice or goblet instead of an aspergillum as typically used when distributing the blessed liquid.

From a practical standpoint, the father said that the chalice prevents the holy water from splashing back into the aircraft while they are mid-flight. However, judging by the splashing back of the holy water being poured out into the high-altitude air in the video, it is unclear whether this method actually succeeds.

“A man saw our plane flying overhead, and told his wife there and then that he would give up the drink—and he did,” Goryachev said. A married couple aboard the flight also said that the husband was miraculously cured of alcoholism. 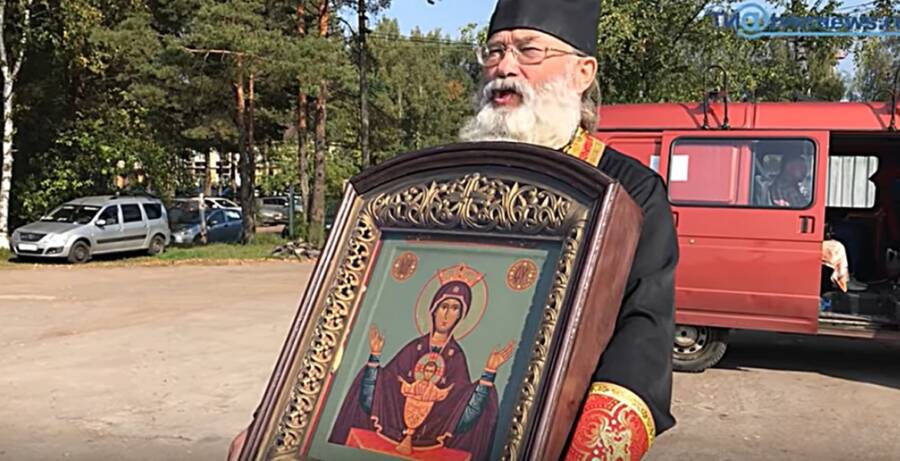 Vesti Tver/YouTubeThe “Inexhaustible Chalice” is an icon of the Mother of God which Orthodox Christians believe helps heal people from addiction.

The priest remains confident about the effectiveness of his methods and disagrees with those that may find it comical.

“What is the joke?” Goryachev asked. “That we’re trying to help people get rid of diseases? We promote stopping alcohol consumption, drugs and fornication—is this laughable?”

“Let them laugh and we will do our job,” he added.

While curing people with addiction using holy water from a plane will certainly raise eyebrows among skeptics, concern over Russia’s growing public health problem with alcoholism is warranted.

Russia, a country deeply synonymous with its production of vodka and prevalent drinking culture, has been battling an increase in extreme drinking in recent years.

There have even been cases of people resorting to consuming bootleg alcohol and non-beverage products that contain alcohol, such as bathroom products and cologne.

In December 2016, 74 people actually died in the city of Irkutsk after drinking scented bath lotion that was mislabeled as containing drinkable ethanol. The lethal ingredient was methanol, a toxic substance commonly used in antifreeze.

On the bright side, the country’s pure alcohol consumption per capita dropped significantly from roughly five gallons in 2005 to three gallons in 2016.

But experts believe that this recent number is a conservative estimate that may not account for unorthodox alcohol drinking like that mentioned above, and current regulations so far appear to be far from sufficient. Until then, at least, Goryachev and company will surely continue their flyover blessings.

Next, read about the exorcism of Anneliese Michel, the real “Emily Rose.” Then, learn about the Russians who used holy water and hypnosis to “treat” homosexuality.