A sharp-eyed volunteer spotted the print, which is based on a series of watercolors Salvador Dalí produced in homage to Dante's "Divine Comedy." 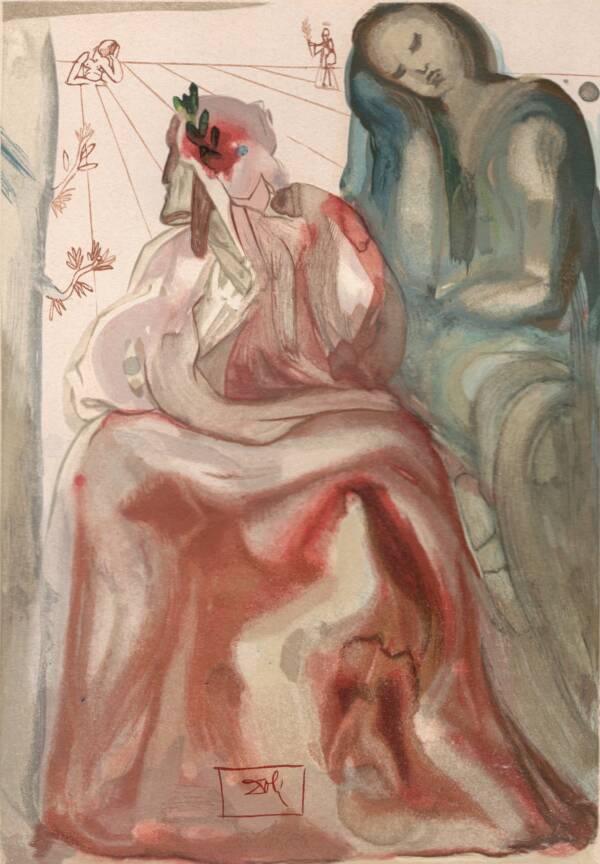 Seaside Art GalleryThe print is based on a series of 100 illustrations Dalí created in the 1950s.

The artwork donated to Hotline Pink Thrift Store in Kitty Hawk, North Carolina, often arrives dusty and in broken frames. Customers sometimes skip right past it. But one piece recently caught the attention of a volunteer — and it turned out to be a genuine Salvador Dalí woodblock print.

“One day I saw this, with a bunch of other paintings lined up on the floor, and I said, ‘This is old, this is something special,” explained the volunteer who first spotted the piece, Wendy Hawkins.

Hawkins followed her hunch. She took the painting down the road to Seaside Art Gallery in Nags Head. There, she asked Melanie Smith, a local art dealer and appraiser, what she thought.

Finally, after consulting the Official Catalog of the Graphic Works of Salvador Dalí and examining the artwork with a 10-power magnifying loupe, Smith made her decision. The thrift store find was actually a print made from a wood engraving created by Spanish surrealist Salvador Dalí. 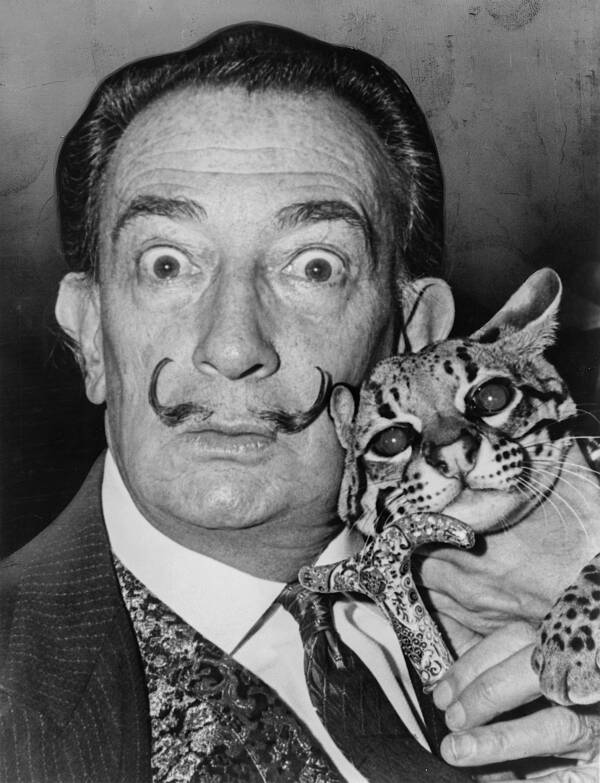 Library of CongressSalvador Dali and his pet ocelot in 1965.

The print belongs to a series that Dalí worked on in the 1950s, based on the 14,000-line poem The Divine Comedy by the Italian poet Dante Alighieri. Dante’s 14th-century verse tells the tale of a writer’s journey from the circles of hell to purgatory, and finally, to paradise.

The Italian government had enlisted Dalí’s talents to celebrate Dante’s 700th-birthday, which would take place in 1965. Following an uproar in Italy — Italians didn’t want a Spaniard on the project — Dalí was dismissed. But he kept working on the project anyway.

In the end, Dalí produced 100 watercolors to match the original poem. “Dante wrote 100 different verses or cantos,” explained Smith, and Dalí produced 34 paintings of Inferno (Hell), 33 of Purgatory, and 33 of Paradise.

The thrift store find was Purgatory Canto 32. The canto covers the reunion in Purgatory of Dante and Beatrice, Dante’s real-life unrequited love who had died years before The Divine Comedy was finished. Dalí’s painting shows Dante draped in red with Beatrice in blue standing beside him.

Dalí’s watercolors were then reproduced using hand-carved woodblock prints. Some 3,500 woodblocks were made, with 35 for each watercolor. These were compiled into a book, which was published in the 1960s.

But over the years, some prints were sold individually. Dalí even signed several of these with colored pencils. He used purple for purgatory, blue for heaven, and red for hell. Significantly, the print discovered at Hotline Pink Thrift Store is signed in purple. 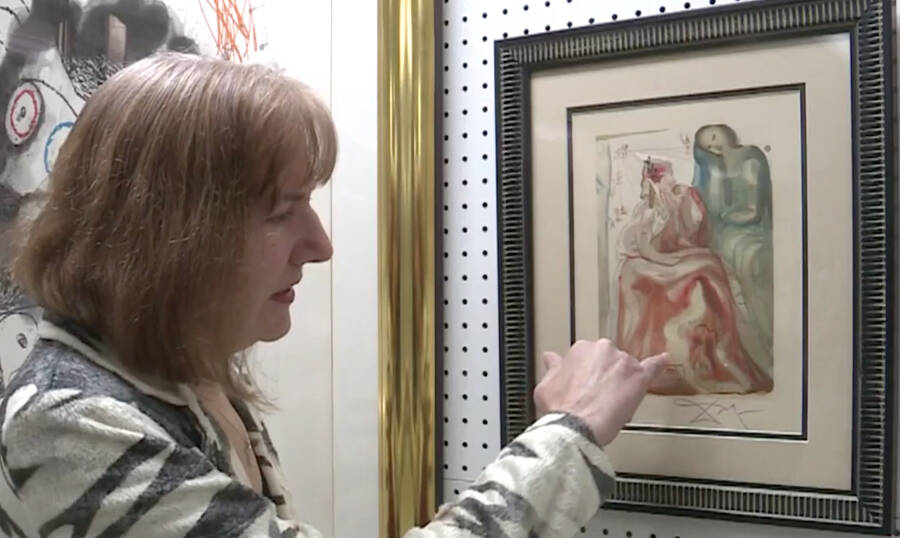 WAVYArt dealer and appraiser Melanie Smith researched the print for a week to determine its authenticity.

At some point, someone got their hands on the hand-signed Purgatory Canto 32. And for some reason, they decided to donate it to the Hotline Pink Thrift Store in Kitty Hawk, North Carolina. Their identity remains unknown.

Michael Lewis, the executive director of the Outer Banks Hotline, which runs Hotline Pink Thrift Store alongside four other thrift stores, noted that people often donate art after cleaning out their beach cabins. Usually, the thrift store prices what Lewis called “‘cookie-cutter’ art for condos” for about $10.

“We get things donated in the middle of the night and sometimes people just drop off things and leave, so we have no idea who donated it,” he told CNN.

No one knows where this Dalí print came from. But it’s escaped a fate of wasting away on a shelf filled with thrift store knickknacks.

“It’s rare to find anything like this,” raved Smith. “It’s like a treasure hunt, and thanks to Wendy, [the print has] been rescued, and brought to light so people in the art world can really enjoy it”.

Smith bought the painting from the thrift store. She cleaned it off, put it in a new frame, and put it up for sale. A couple from Portsmouth bought it for $1,245.

“Luckily, it was saved, instead of going by the by,” Smith said.

Meanwhile, the exciting find has also resulted in a boost of business for Hotline Pink Thrift Store, which helps support victims of domestic violence.

According to Wendy Hawkins, “We’ve just had people coming in saying, what painting do we have today on special?”

After reading about the Salvador Dalí print discovered in a thrift store, check out Dalí’s mind-bending interpretation of Alice in Wonderland. Or, see how a paternity test after Salvador Dali’s death revealed that his famous mustache was still intact.