The Story Of Sam Ballard, The Australian Teen Who Ate A Slug On A Drunken Dare And Died Because Of It 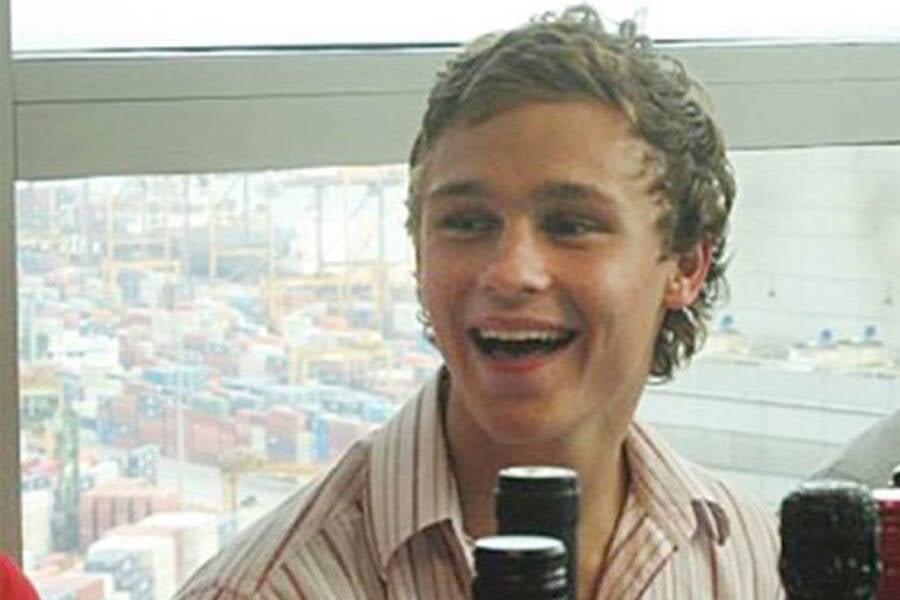 FacebookSam Ballard was popular in Sydney and described as a “larrikin” by his mother before he contracted rat lungworm disease.

Sam Ballard was a promising 19-year-old rugby player from Sydney, Australia, enjoying a weekend get-together with friends in 2010 when he made a random decision that would prove fatal. As the friends had a “bit of a red wine appreciation night,” as friend Jimmy Galvin said, a typical garden slug crawled out in front of them.

In a moment of teenage bravado, perhaps influenced by the wine, Ballard was dared to eat the slug. “And then off Sam went,” Galvin said.

At first, everything seemed fine, and the friends carried on as usual. But within a few days’ time, Sam began to complain of severe pain in his legs. Then, he started vomiting and experiencing dizzy spells. When his condition worsened and he fell weak, his mother rushed him to the hospital.

No one could have predicted that hospital visit would result in a 420-day-long coma that would paralyze Ballard for eight years — and eventually kill him.

So, how could such an innocuous event cause such a horrific tragedy?

When they first arrived at the hospital, Sam Ballard’s mother, Katie, feared that Sam might have multiple sclerosis — a condition that had affected his father — but doctors assured her that wasn’t the case.

Sam turned to his mother and explained that he had eaten a slug. “And I went, ‘No, no one gets sick from that,'” she said during a segment on Australian current affairs show, The Project. As it turned out, Sam Ballard had indeed gotten very sick from it.

Sam Ballard had become infected with rat lungworm disease, a condition caused by a parasitic worm usually found in rodents — though it can transfer to slugs and snails if they eat rodent excrement. When Ballard ate the live slug, it transferred to him.

When a human ingests rat lungworm larvae, they penetrate the inner lining of the intestinal tract and work their way into the liver and lungs, then into the central nervous system.

In most instances, rat lungworm disease causes only mild symptoms, if any, and most people who contract the illness recover within a matter of days or weeks. However, there are those rare instances where the symptoms are much more severe, as was the case with Sam Ballard.

According to the University of Hawaii, humans are a “dead-end” host for the nematode Angiostrongylus cantonensis — the scientific name for rat lungworms — meaning the parasites don’t reproduce in humans, but they do “get lost” in the central nervous system, or even move into the eye chamber, until they die. 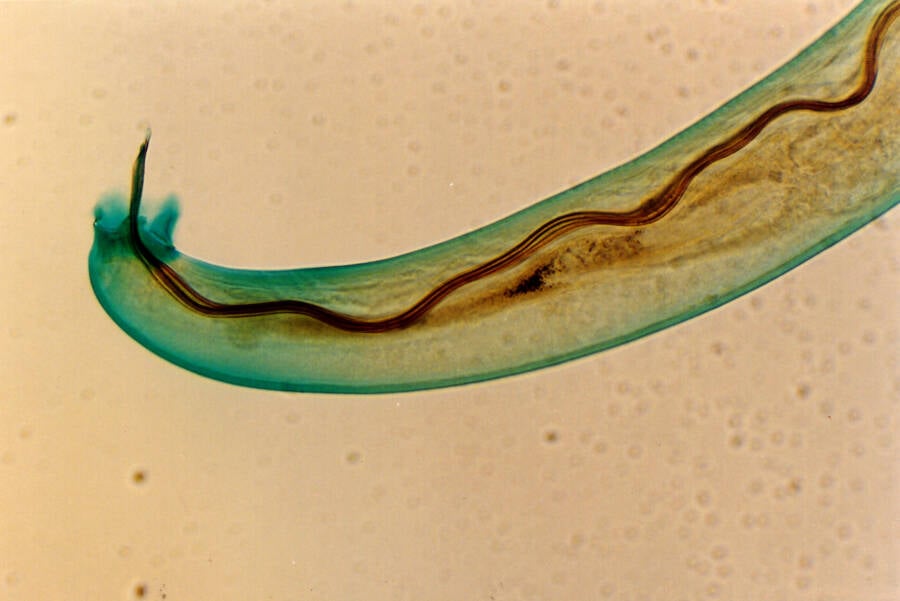 The presence of these parasites can result in transient meningitis — inflammation of the meninges, the membranes that protect the brain and spinal cord — or more severe and direct damage to the brain, spinal cord, and nerve roots.

In the case of Ballard, this damage induced a coma and left him bound to a wheelchair and unable to eat without a tube.

Sam Ballard’s Life After Waking Up From His Coma

Katie Ballard once described her son as “invincible” and called him a “larrikin,” an Australian slang term used to describe a young man who is often boisterous and badly behaved.

In other words, a bit of a delinquent, his mother’s “rough-and-tumble Sam.” Katie felt she’d never had to worry about anything bad happening to him.

When something bad ultimately did happen, it blindsided her.

“He is still the same cheeky Sam, and laughs a lot,” she wrote in a Facebook post, but later added, “It’s devastated, changed his life forever, changed my life forever. It’s huge. The impact is huge.”

Katie Ballard initially remained hopeful that her son would one day regain the ability to walk and talk. After some time, though, her hope faded.

Sam’s paralysis meant he now required 24-hour care, seven days a week. He was prone to seizures, unable to go to the bathroom without help or control his body temperature. He spent three years in the hospital before being released, just able to operate a motorized wheelchair.

Online, trolls were quick to cast blame, saying that Sam’s friends should be the ones paying for Sam to be looked after. Katie Ballard never blamed his friends, though. They were young, “just being mates.” 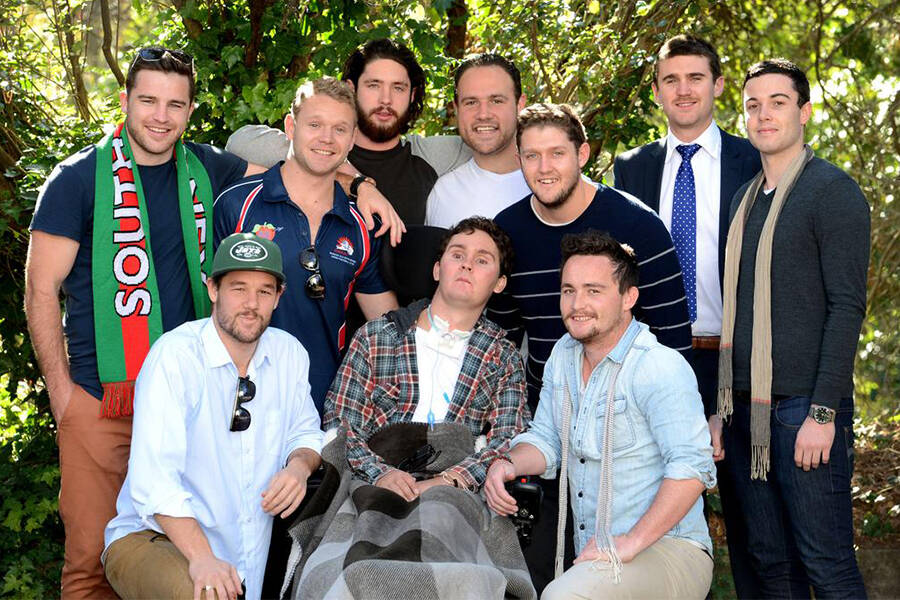 Simon Cocksedge/News Corp Australia“I only care about Sam and his family and what we do in this situation, what we are doing in the future,” Jimmy Galvin (bottom left) said. “My feelings are irrelevant to be honest.”

Jimmy Galvin told The Project that the first time he saw his friend again, he apologized for not stopping him from eating the slug.

“He’s in there 100 percent,” Galvin said. “I apologized to Sam about everything that happened that night in the backyard. And he just started bawling his eyes out. I know he’s there.”

Another of Sam’s friends, Michael Sheasby, described what it was like seeing Sam in the hospital. “When I walked in, he was very gaunt, and there were cables everywhere,” he said. “It was a big shock.”

Still, his friends never abandoned him. They’d come around often to watch “footy” and rugby with him. When Katie left the room, Sam would reach out for an open beer, and his friends would pour just a little bit out onto his lips.

They said his eyes lit up whenever they entered the room.

“Seeing where he is now, being able to move his arms or just grip something, that to me is a huge improvement,” Michael Sheasby told The Project. “The walking into the room and a hand coming out to give you a handshake. It’s that kind of stuff.”

“Team Ballard,” as they were called, initially even managed to raise enough money to pay for Sam’s care, but it wasn’t enough for the constant, round-the-clock care Sam would require for the rest of his life.

Thankfully, Sam became eligible for a $492,000 care package in 2016 when his mother submitted an application to the National Disability Insurance Scheme (NDIS).

A second tragedy struck the Ballard family only a year after Sam was approved for NDIS funding.

As reported by The Courier Mail, in October 2017, after a review of Sam’s plan, the Australian NDIS slashed his allocation from $492,000 to only $135,000. When they texted Katie to inform her, they offered no explanation — the funding cut left the Ballards $42,000 in debt to the nursing service that had been caring for Sam.

Substantial media coverage and a push from Katie Ballard eventually saw the decision reversed and Sam’s funding restored, with the NDIS claiming that the cut to Sam’s funding was due to an error, not a policy change.

Despite this, unfortunately, the seemingly endless health complications Sam Ballard faced over the course of eight years took their toll, and he passed away in November 2018. 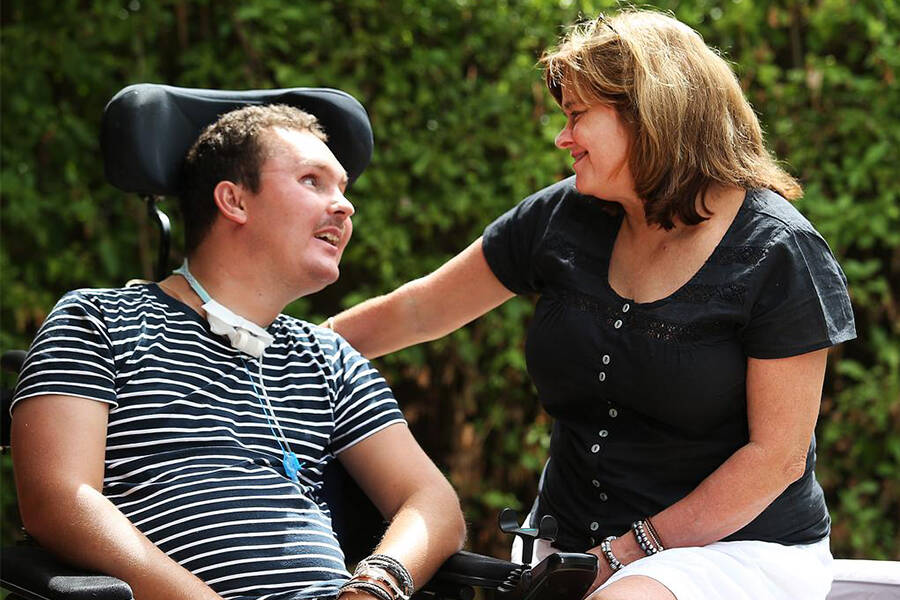 Lisa Wilkinson, The Project reporter who originally spoke with Sam, Katie, and his friends, wrote a tribute to Sam shortly after his death, writing that while meeting “huge names” can be fascinating, it’s far more fascinating to meet everyday people with extraordinary stories to tell — “None more so than the remarkable Sam Ballard.”

Of his friends, she wrote, “I have rarely met a finer group of young men. They made a mistake, a spur of the moment muck around of unforeseen consequences that should not define them. And their love and support for Sam has never wavered in the years since.”

As reported by The Daily Telegraph, tributes to Sam Ballard flooded social media in the days following his death. He was described as “the life of the party during the North Sydney golden era.”

“Before you jump off a roof into a pool, or if you’re daring a mate to eat something stupid, just think about it, because it can have the worst consequence,” Galvin said. “Just take care of each other.”

Sam Ballard’s final words to his mother were, “I love you.”

After reading about Sam Ballard’s tragic death, learn about John Callahan, the man who learned to draw his politically incorrect art while paralyzed. Then, meet Paul Alexander, one of the last few people on Earth in an iron lung.