Samantha Koenig was just 18 years old when serial killer Israel Keyes kidnapped and murdered her in Anchorage, Alaska — before sewing her eyelids open for a chilling "proof of life" photo. 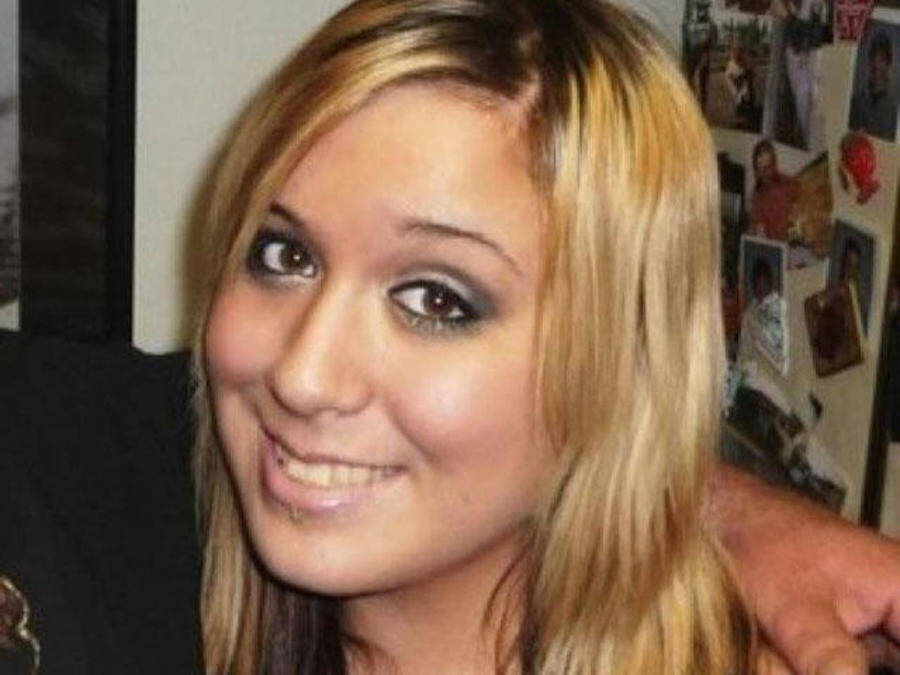 Personal Photo/FacebookBefore Samantha Koenig’s kidnapping and murder by Israel Keyes, he wasn’t on the radar of any law enforcement agency.

Samantha Koenig could have had a quiet, ordinary life. Instead, the 18-year-old barista in Anchorage, Alaska, was murdered by a serial killer no one even knew existed — until her grisly death led to his capture.

Since at least as early as 1998, serial killer Israel Keyes had traversed the country, selecting targets at random, changing his methods to avoid detection, and even going so far as to bury “murder kits” for years before using them to kill unsuspecting victims. But Samantha Koenig’s killing was different.

Keyes lived in Anchorage with his 10-year-old daughter and girlfriend. And on February 1, 2012, he kidnapped Koenig from her coffee stand, telling her it was only for ransom. And while Keyes did send Samantha Koenig’s ransom photo to her parents, it was a fake. He’d taken it two weeks after she died — after he went on a Caribbean cruise with his family — and had sewn Samantha Koenig’s eyelids open with fishing line.

Yet it was Samantha Koenig’s ransom photo that inadvertently led to his capture. The “proof of life” picture convinced her parents that she could be saved, and they gave Keyes the money he asked for — deposited into Koenig’s bank account linked to a debit card he’d stolen from her. But once he began withdrawing the money, it didn’t take long for police to find him.

In 2012, Samantha Koenig was 18-years-old and working at a coffee shop called Common Grounds in Anchorage. Despite being Alaska’s largest city, less than 10 percent of the total square footage of the municipality is populated, leaving it wide open for predators to travel through virtually undetected.

One such predator was Israel Keyes, who — unbeknownst to his last victim — was scoping out her place of employment before he finally struck on February 1, 2012.

Originally from Utah, Israel Keyes claims to have committed his first murder in 1998, shortly after he enlisted in the United States Army. And by the time he encountered Samantha Koenig, he’d killed up to 10 people in multiple states, including Washington, New York, Vermont, and Florida.

But the murder of Samantha Koenig would be Israel Keyes’s last kill — and it was right in his own backyard. Keyes lived in Anchorage with his 10-year-old daughter and his girlfriend, Kimberly. And he’d never before killed so close to home. 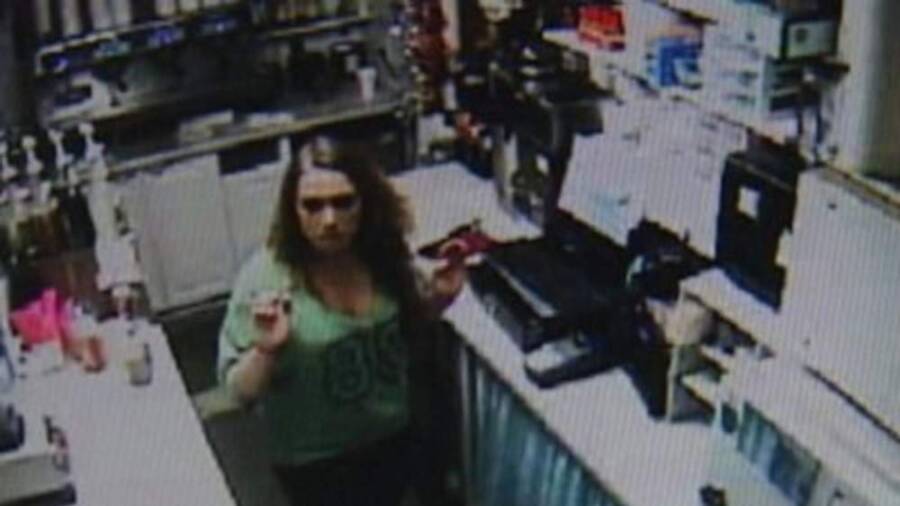 On February 1, 2012, he kidnapped Koenig from the drive-through coffee shop where she’d worked. That night, just before 8 p.m., he walked up to the window, pointed a revolver at her, told her it was a robbery, and ordered her to turn off the lights.

The moment she did, according to The New York Post, he bound her hands, jumped through the window, stuffed a handful of napkins in her mouth, and forced her out of the coffee stand and into his pickup truck. Then, he drove her to his house while telling her that he only wanted to hold her for ransom.

But it was a lie. As soon as Keyes took Koenig’s debit card and cell phone, he didn’t need her alive anymore. Around 2 a.m., he finally took her from his truck and moved her to his tool shed, where he tied her up by the neck. Then, Keyes went inside to check on his daughter and girlfriend and make sure they were asleep. He poured himself a glass of wine and returned to the shed.

There, Keyes sat drinking it while he told Koenig how he would rape her before strangling her to death with the rope he’d already tied around her neck — and that’s exactly what he did. He left Koenig’s body in the shed, went back into his house, and packed his bags and one for his daughter.

And at 5 a.m. sharp, he called a cab to the airport to fly to New Orleans for a two-week Caribbean cruise that he’d planned with his family.

Samantha Koenig wasn’t reported missing until the next day, hours after she was already dead. Despite this delay, the FBI immediately descended on Anchorage, hoping to find the missing girl. But their efforts were in vain, and leads were scarce at best.

Israel Keyes, who’d disguised himself for the coffee stand’s security camera, didn’t even appear on their radar.

But when Keyes returned from his vacation on February 17, he decided to take Samantha Koenig’s ransom photo and promise her parents that she would be unharmed if they gave him money.

That day, according to Latin Times he sewed Samantha Koenig’s eyelids open with fishing line, braided her hair, and applied makeup to her face. Then, he propped her body against a wall, held out a current issue of The Alaska Daily News, and took a picture. This was the “proof of life” photo that he intended to use to prove she was unharmed. 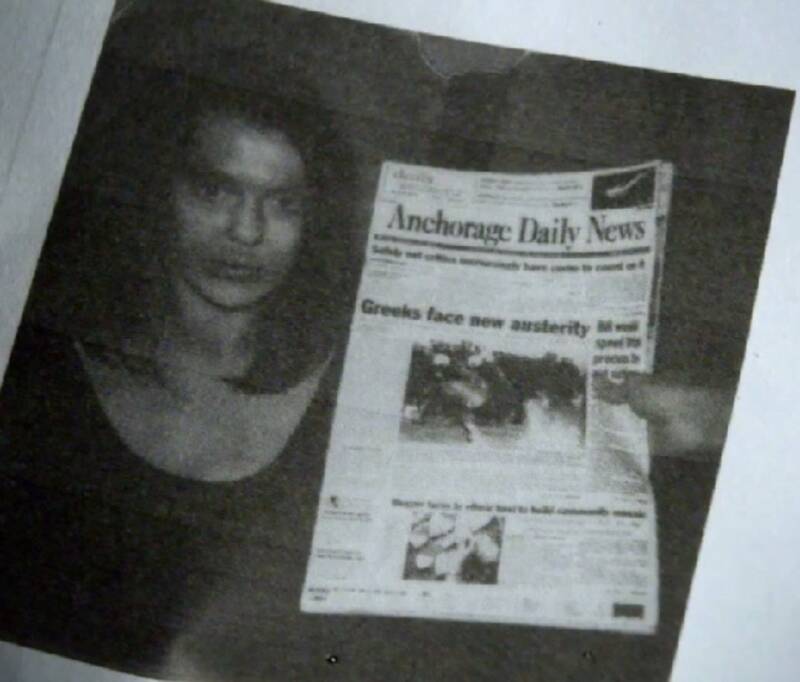 Then, on February 24, he texted her boyfriend from her phone and told him to look for a package in a local park. There, Anchorage police found the photo and a note demanding that $30,000 be deposited into Koenig’s bank account. Her parents gladly paid.

But she would never be returned to them. As reported by Alaska Public Radio, Keyes dismembered her body and disposed of the remains in a frozen lake just outside of Palmer, Alaska, to the north.

How The FBI Finally Caught Their Serial Killer

Within days of Samantha Koenig’s parents’ deposit into her account, her debit card began pinging. First in Anchorage, then in Arizona, then New Mexico, then Texas. The FBI quickly deduced that her abductor was traveling east along Interstate 10.

But Israel Keyes had made a mistake during one of his very first withdrawals. In addition to a masked man, an ATM camera in Arizona had captured a white Ford Focus.

“That information was pushed out to law enforcement across that entire corridor,” special agent Joline Goeden, who investigated the Israel Keyes case, told CBS’s 48 Hours.

By March 13, a Texas state trooper in the town of Shepherd spotted the car in a hotel parking lot. According to CBS, he waited for the owner to come out and followed until the car exceeded the speed limit, pulling Keyes over the second he did. And when he searched the car, the trooper found Koenig’s ATM card, her cell phone, and the same disguise worn by the man captured on all the ATM cameras where Koenig’s card had been used.

Samantha Koenig’s body wouldn’t be discovered until April 2, a few days after Keyes confessed to his crimes, according to Oxygen. That’s when he also explained how he’d staged the ransom photo by sewing Samantha Koenig’s eyelids open. Unfortunately, Koenig’s family would never get justice for her murder. 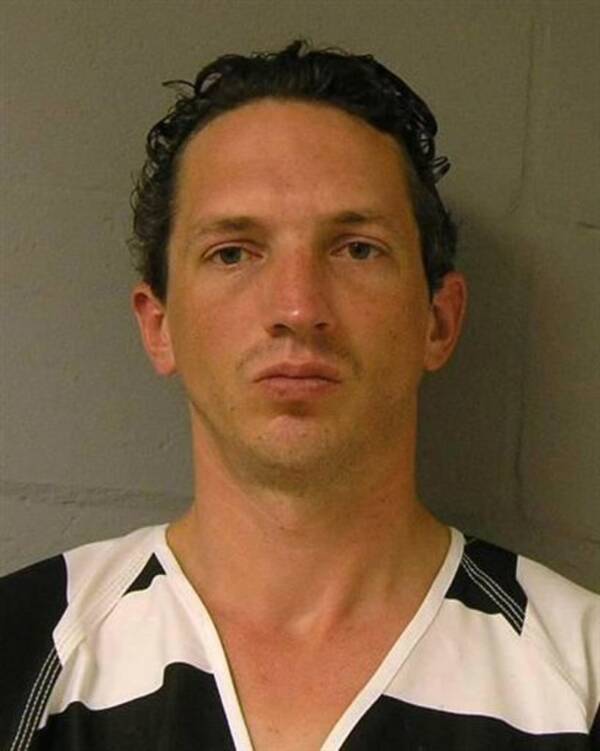 FBIIsrael Keyes murdered at least three people but may have killed up to 11 before he was arrested for Samantha Koenig’s murder in 2012.

In May 2012, Keyes tried to escape from a courtroom after breaking his leg irons during a routine hearing. Fortunately, his escape attempt was unsuccessful, and authorities restrained him again. On December 2, 2012, Israel Keyes managed to conceal a razor blade in his jail cell at the Anchorage Correctional Complex in Alaska, which he used to take his own life.

He left behind a message: 11 skulls drawn with his own blood labeled, “We Are One.” Officials suspect this alludes to the total number of his victims.

Despite the horrific nature of his crimes — the details of which are still being uncovered to this day — authorities believe that there was no way Samantha Koenig could have been spared her fate. Special agent Goeden told 48 Hours that he was a man who had nothing significant in his criminal history — and indeed, nothing that would suggest what was to come.

“I believe he had a DUI but that was it,” she told 48 Hours. “No crimes of violence in his history, no sex offenses in his history, nothing like that. He’s a 34-year-old man from Alaska who has a construction business, a small kind of quiet life.”

After learning about how Samantha Koenig’s eyelids were sewn open for a grisly “ransom” photo, read the story of Frank Gotti, John Gotti’s youngest son who was tragically killed — only to have his father and his father’s compatriots murder him in a brutal act of revenge. Then, learn about Claire Miller, the popular TikTok star who killed her disabled sister.