"Good people of Arkansas and supporters of religious liberty, I present to you Baphomet — the symbol of pluralism, legal equality, tolerance, free inquiry, freedom of conscious, and reconciliation." 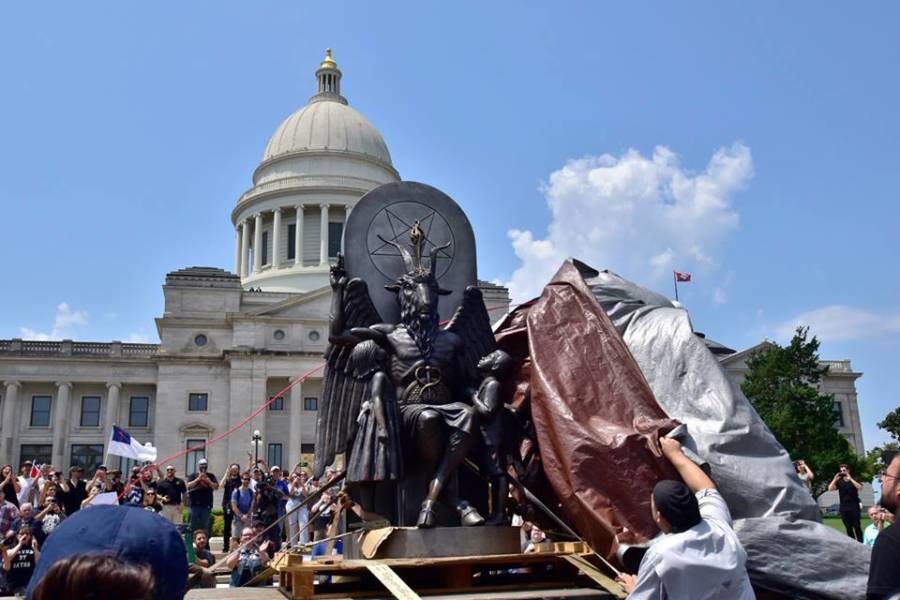 Members of the Satanic Temple in Arkansas made a bold statement to state lawmakers when they built a monument of Baphomet — an idol worshipped by the religion — onto the grounds of the Arkansas State Capitol on August 17.

The Satanic Temple brought in the monument of the goat-headed creature in response to a monument of the Ten Commandments that had been erected at the State Capitol’s grounds in 2017. The Satanic Temple’s members were joined by other protesters that came to support their fight for religious liberty, in light of the recently installed Christian monument.

Lucien Greaves, a spokesman for the Satanic Temple, introduced Baphomet in front of the crowd that had come to celebrate the unveiling of the eight-foot monument. “Good people of Arkansas and supporters of religious liberty, I present to you Baphomet, the symbol of pluralism, legal equality, tolerance, free inquiry, freedom of conscience, and reconciliation,” said Greaves. 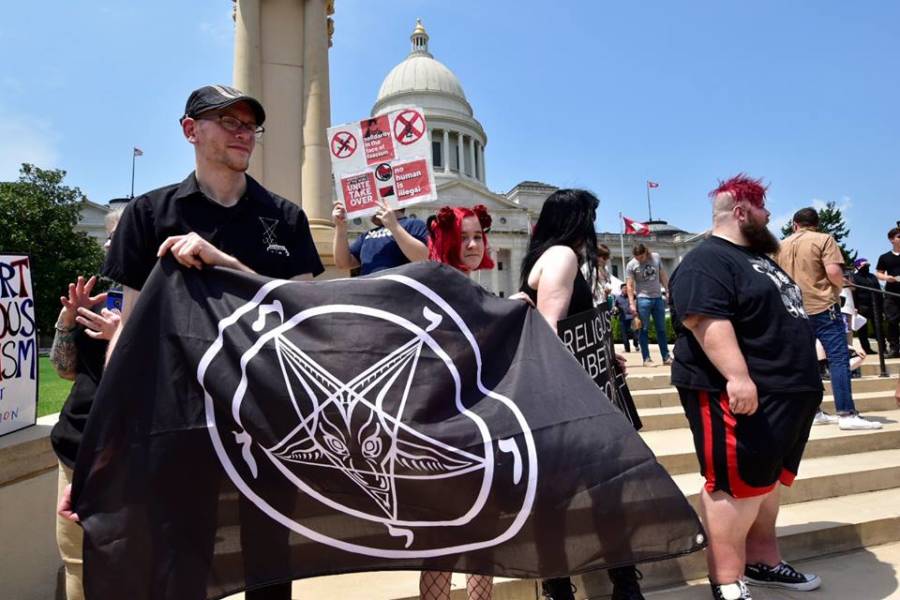 Arkansas Times/FacebookProtesters and members of the Satanic Temple gather in front of the Arkansas State Capitol for the unveiling of the Baphomet monument.

Greaves also went on to explain what erecting Baphomet means for both the Satanic Temple and for anyone supporting their action:

“We did not bring Baphomet here in hope of replacing the Ten Commandments monument. It is not the purpose of our monument or our efforts to erect this monument, to impugn or silence the beliefs of others… What we are asking for is only that the public square, these Capitol grounds, remain an area in which free speech, religious liberty, and equality under the law be respected by the holders of public office who swore to uphold those values.

Lucien Greaves of the Satanic Temple addresses the crowd upon the introduction of the Baphomet statue.

Arkansas State Sen. Jason Rapert (R) — who paved the way for the Ten Commandments statue at the Capitol — has nevertheless responded to the Satanic Temple’s demonstration and said that while he supports their First Amendment rights, he believes that the Satanists are “extremists” and said “it will be a very cold day in hell before an offensive statue will be forced upon us to be permanently erected on the grounds of the Arkansas State Capitol.”

This conflict first began in 2015 when the Arkansas Legislature passed legislation sponsored by Rapert that allowed for the initial Ten Commandments monument to be placed on the State Capitol grounds. The new law, dubbed the Ten Commandments Monument Display Act, requires Arkansas’ Secretary of State to permit and arrange for the monument.

The law cites a 2005 Supreme Court case that permitted the Texas State Capitol to keep their Ten Commandments monument in place. The high court ruled in Van Orden v. Perry that the monument is constitutional, due to the fact that it is not purely religious but also has historical significance.

Once the new law passed, Rapert raised the money himself to make the Ten Commandments monument a reality. He created a nonprofit, the American History & Heritage Foundation, and the group’s GoFundMe page indicates that they raised more than $85,000.

The end result was the placement of a six-foot tall granite monument of the Ten Commandments, which happened in late June 2017. “We have a beautiful Capitol grounds but we did not have a monument that actually honored the historical moral foundation of law,” said Rapert. “And today we have now, through the support of people all over the country, mostly from Arkansas, been able to erect this monument at zero taxpayer expense.”

State Sen. Jason Rapert at the installation of the Ten Commandments monument on the grounds of the Arkansas state Capitol on June 27, 2017.

However, that monument did not last long. Mere hours after it was erected, the first Arkansas Ten Commandments monument was destroyed by Michael T. Reed II, who drove his Dodge Dart into the granite statue.

The second Ten Commandments was installed in April 2018, this time with bumpers surrounding it so that it’s protected from other people who might want to damage it or tear it down again.

Since the installment of the second monument, groups that oppose the monument’s placement at the Capitol grounds — namely the Satanic Temple — have ratcheted up their fight for religious equality and liberty.

At the unveiling of the Baphomet monument, Greaves explained, “The Satanic Temple never asked for the Ten Commandments monument to be taken down, nor do we ask that Baphomet be erected to the exclusion of any other monuments of religious significance… from the beginning we were clear: we only want our monument on public grounds where other monuments of religious significance are preexisting.”

Next, check out this video of the Arkansas driver that destroyed the state’s first Ten Commandments monument. Then, discover the chilling story of the Satanic Corpsewood Manor murders.