Although construction on "The Line" appears to have begun in the desert of Tabuk, some insist that this vertical megacity is too unrealistic to work. 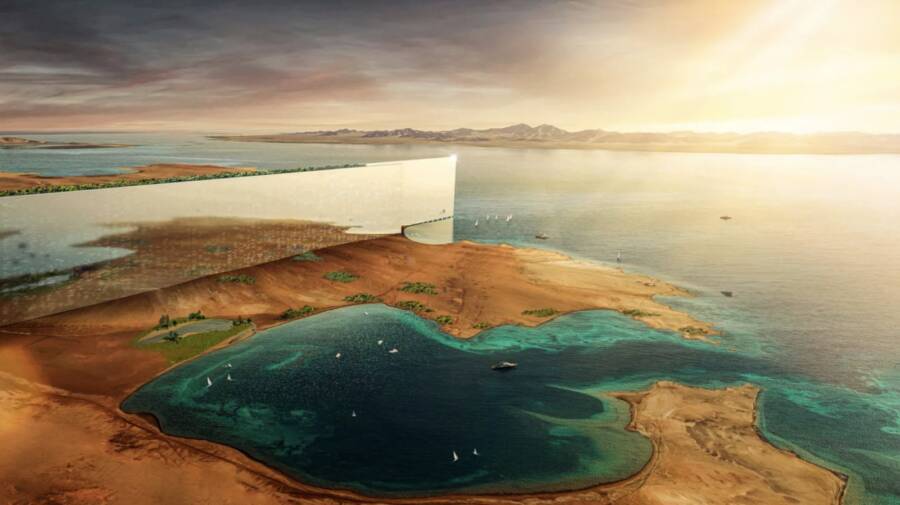 In Saudi Arabia, the future has already begun. There, a project called NEOM has allegedly started construction on The Line, a self-contained megacity designed to stretch 1,600 feet tall, 650 feet wide, and 105 miles long.

According to Gizmodo, drone footage shot by the Saudi Arabian company Ot Sky, and posted by the architecture news outlet Dezeen on YouTube suggests that construction of The Line has begun in the desert near Tabuk, Saudi Arabia.

The minute-long video begins with the title “The Line Project: New Wonders For The World” and shows a flurry of trucks and construction workers in the desert as triumphant orchestral music plays.

Footage of The Line construction

As CNBC reports, The Line is one part of the greater NEOM initiative, which seeks to construct three futuristic “regions” in Saudi Arabia. In addition to The Line, which could someday house nine million residents, it has also planned a floating industrial complex called Oxagon and a “mountain-air” getaway called Trojena that will offer skiing, biking, water sports, and more.

“NEOM is a vision of what a new future might look like,” the company explains on its website, adding: “Simply put, NEOM will be a destination, a home for people who dream big and want to be part of building a new model for sustainable living, working, and prospering.”

CNBC reports that the $500 billion NEOM project is part of an initiative in Saudi Arabia called Vision 2030, which was designed to diversify the Saudi economy in order to lessen the country’s economic reliance on oil. But is NEOM realistically possible?

NEOM’s plausibility seems to depend on who you ask. According to The Guardian, Saudi Arabia’s crown prince, Mohammed bin Salman, raved that the project is “a civilizational revolution that puts humans first, based on a radical change in urban planning.”

Likewise, NEOM project leaders are insistent that the project — though very ambitious — will be completed.

“I want to be clear about this — NEOM is a complex, bold, and highly ambitious undertaking and is most certainly not an easy one to deliver,” Antoni Vives, the chief urban planning officer at Neom, told CNBC. “But we are making strong progress, and it’s exciting to see the vision come to life.”

That said, the NEOM project has also faced plenty of critics. According to VICE, many experts have dismissed the NEOM project as unrealistic and unlivable. Specifically, many critics have expressed doubt that these megacities would be as sustainable as they claim. 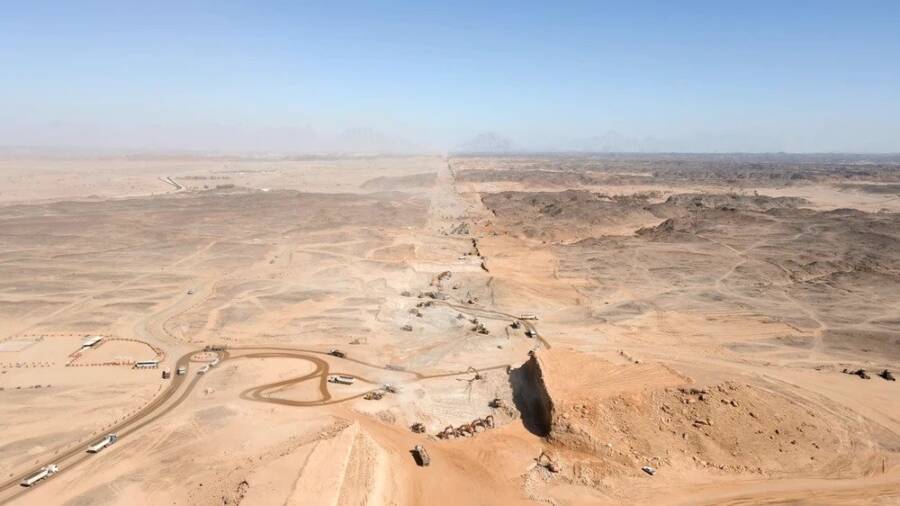 Dezeen/YouTubeIn theory, this swath of desert will soon be home to The Line — and as many as nine million residents.

“Utopian thinking is important; it helps us challenge the preconceptions in the built environment that have generated conventional outcomes which we know contribute to environmental degradation,” Philip Oldfield, the head of the built environment school at the University of New South Wales Sydney told Dezeen, as reported by VICE. “But I think the sustainability and liveability arguments [in relation to NEOM] are naive.”

“The Line raises doubts, urbanistically speaking,” Moore argued. “How can such a colossal project be in any sense sustainable, given that its construction would produce (according to one estimate) more than 1.8bn tonnes of carbon dioxide, which is equivalent to more than four years of the UK’s entire emissions?”

Moore took other issues with the project as well, adding: “What is the benefit of its height when there is so much desert in which it could spread out? What would actually be good about life in this deep narrow canyon, probably subjected to high levels of surveillance and control?”

Moore also pointed out that the NEOM project has resulted in human rights violations, as several members of the Huwaitat tribe were arrested for protesting their eviction from their homes to make way for the project, and sentenced to death.

Given the controversy — and the huge undertaking of building a megacity like The Line — many have professed doubt over whether or not it will ever come to fruition. For now, the world will have to wait and see.

Maybe NEOM will emerge as a series of futuristic cities in the next few years. Or maybe its grand dreams of places like The Line, Trojena, and Oxagon, will continue to exist only in the pages of science fiction novels.

After reading about the construction of The Line, go inside the incredible evolution of the Dubai skyline. Or, discover how Las Vegas went from a desert city to a metropolis.