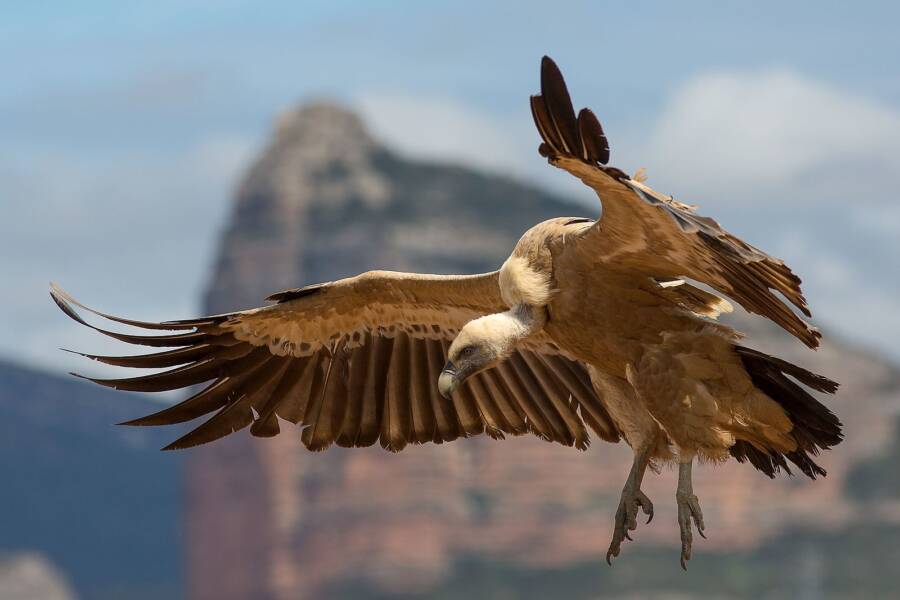 Wikimedia CommonsGriffon vultures comb the land for the carcasses of dead animals to feast upon.

If it has a shockingly long and slender neck with a hooked beak, it’s probably a Griffon vulture. This unfortunately rare type of eagle is Europe’s second-largest bird — and commonly weighs up to 24 pounds. Despite its heft, the vulture’s wingspan of 9 feet allows it to fly at a remarkable 46 mph.

A member of the Accipitridae family, this bird of prey is most commonly found soaring on thermal currents in temperate Mediterranean regions. If its sheer size and flight speed don’t tip you off, Griffons are quickly distinguished by their creamy-white ruff and uniformly gray head and neck.

The vulture’s body and upper wings, meanwhile, are a pale brown that contrasts against its darker flight feathers and tail. Griffons are commonly found in the Middle East, India, and Africa, in addition to their Mediterranean hubs in Portugal and Spain — the latter of which holds the largest population.

This scavenging creature lives in mountainous plateaus, shrub- and grassland, and semi-deserts. Though the species prefers warmer climates, it’s just as resourceful in colder conditions — particularly when it comes to breeding. High cliffs and elevation are usually where they roost. 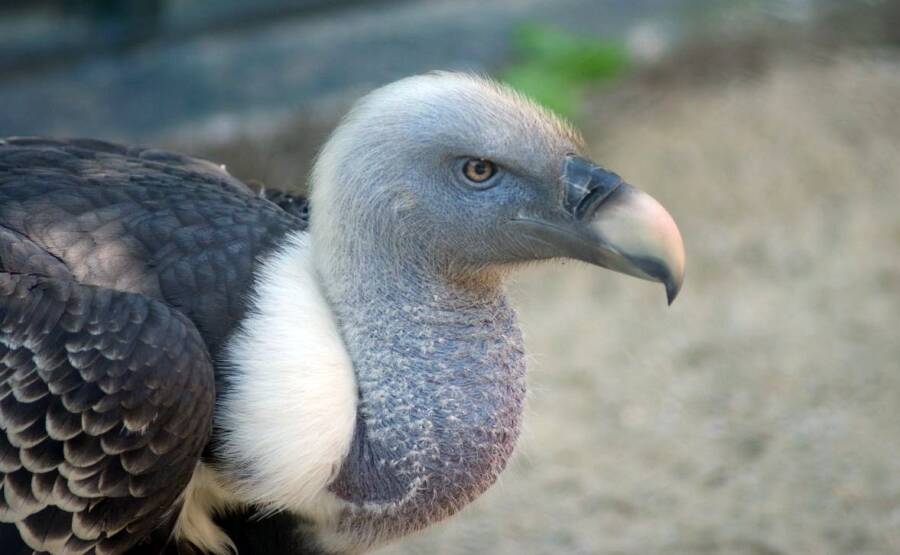 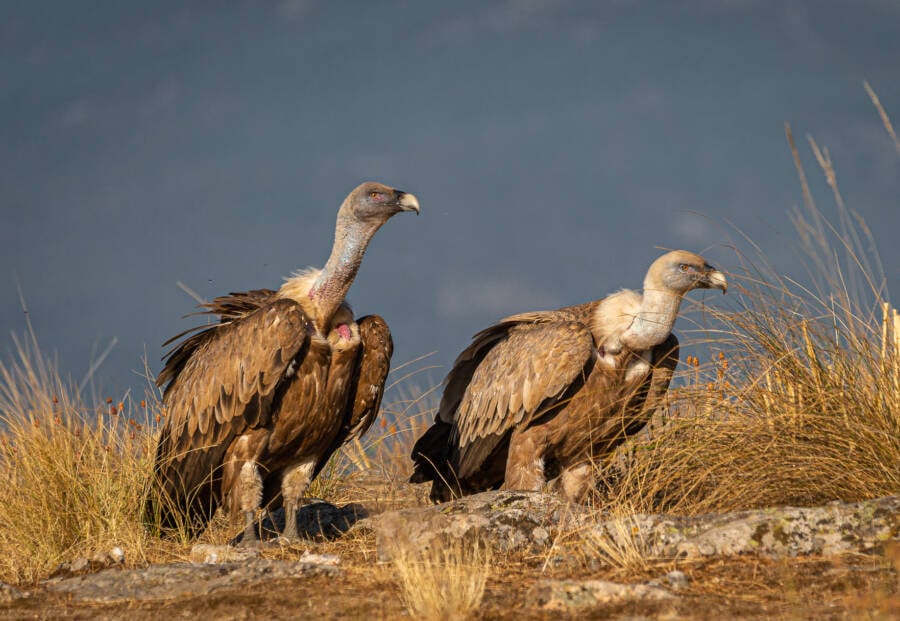 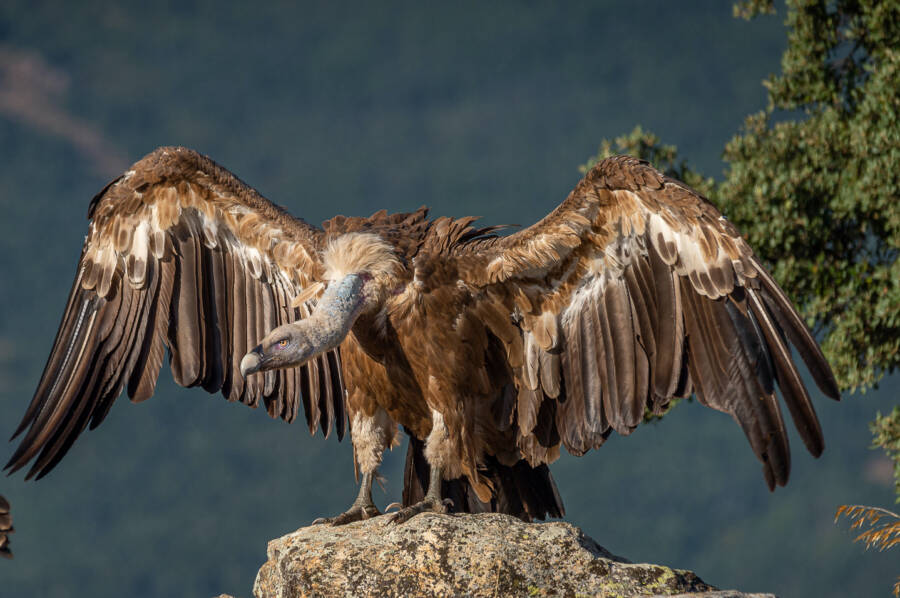 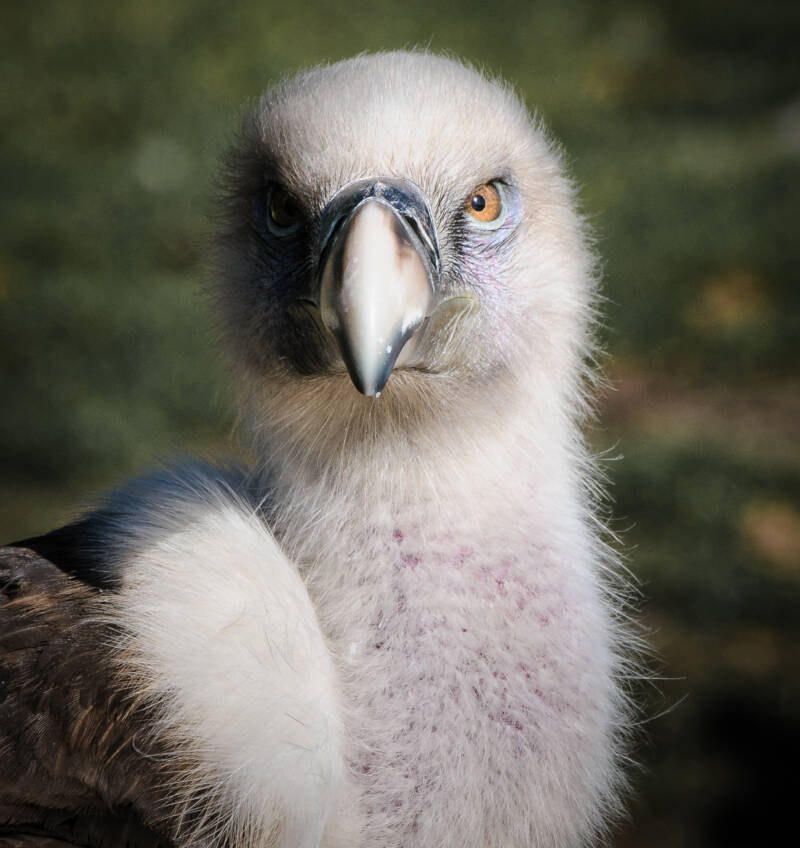 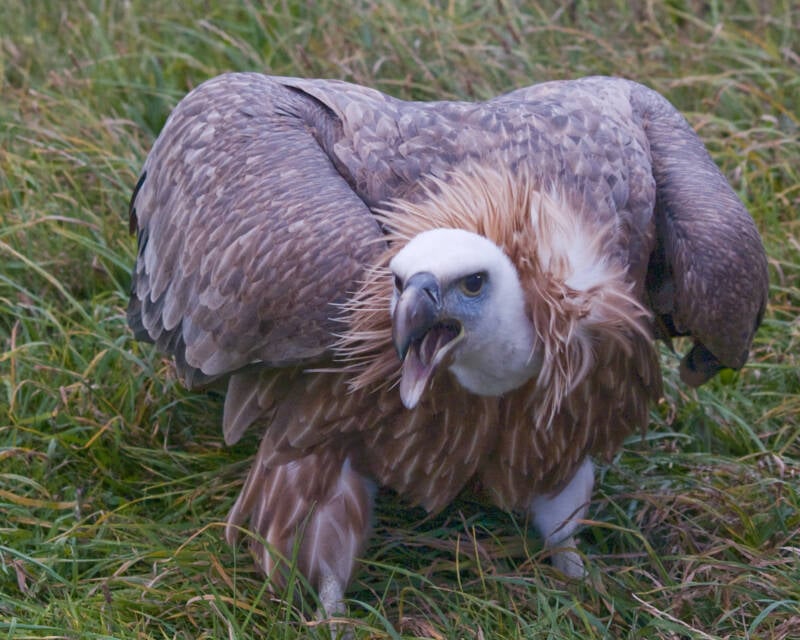 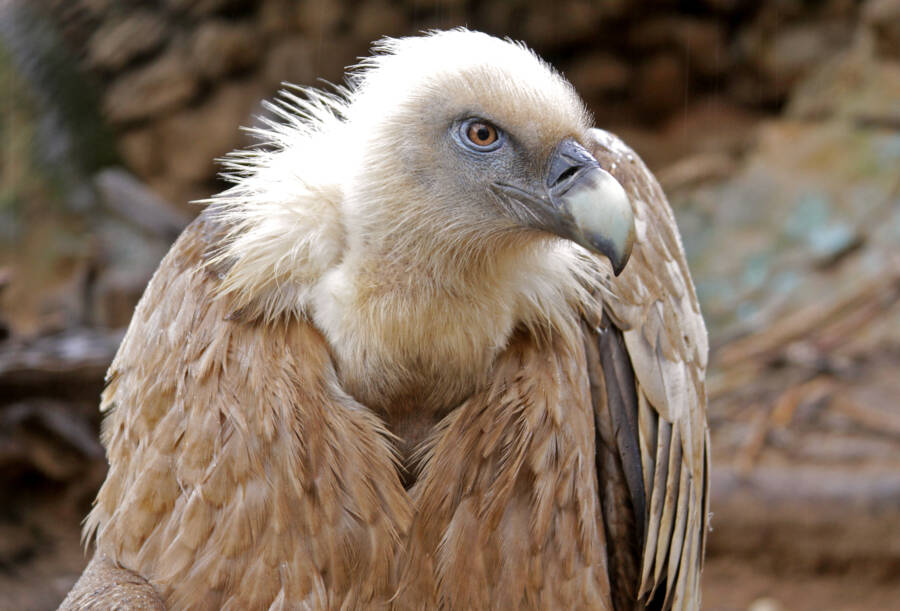 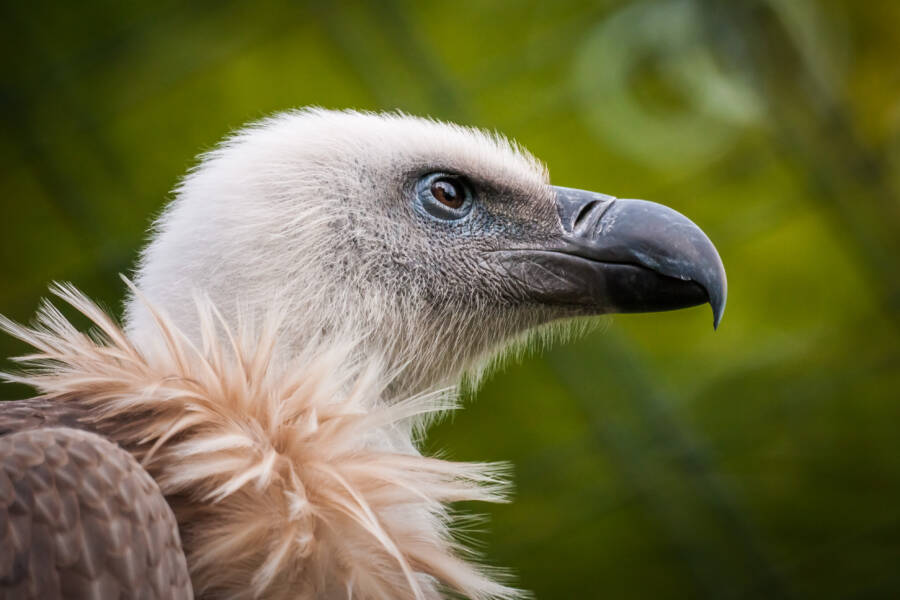 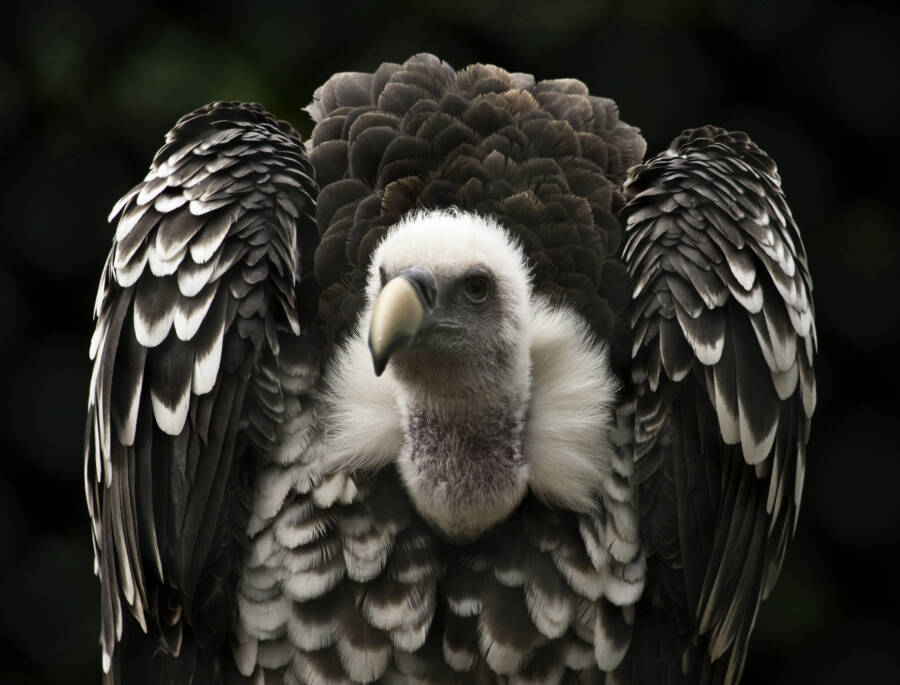 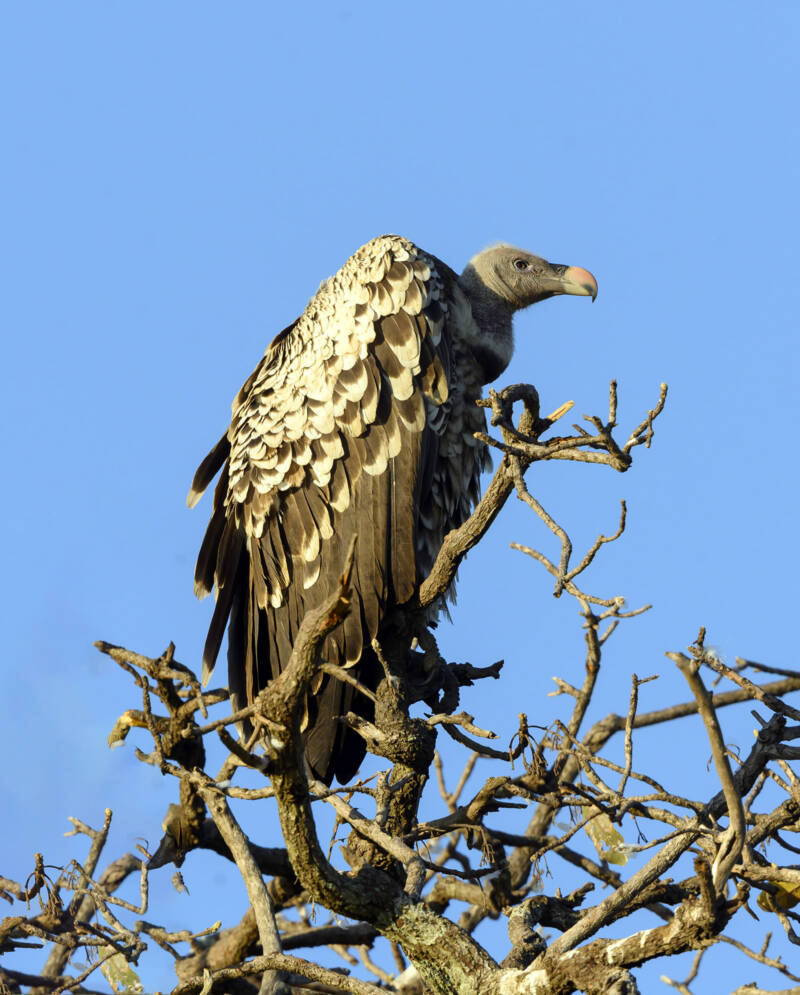 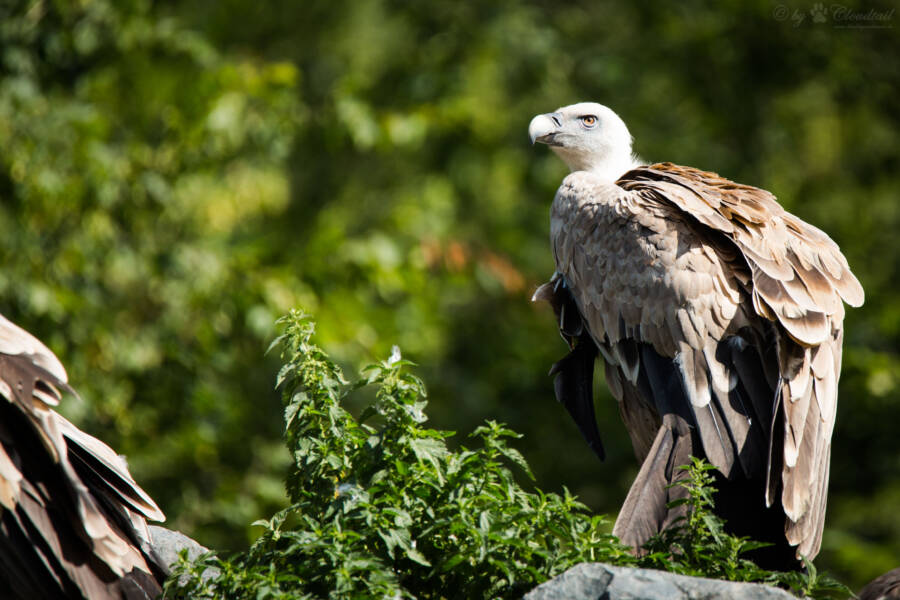 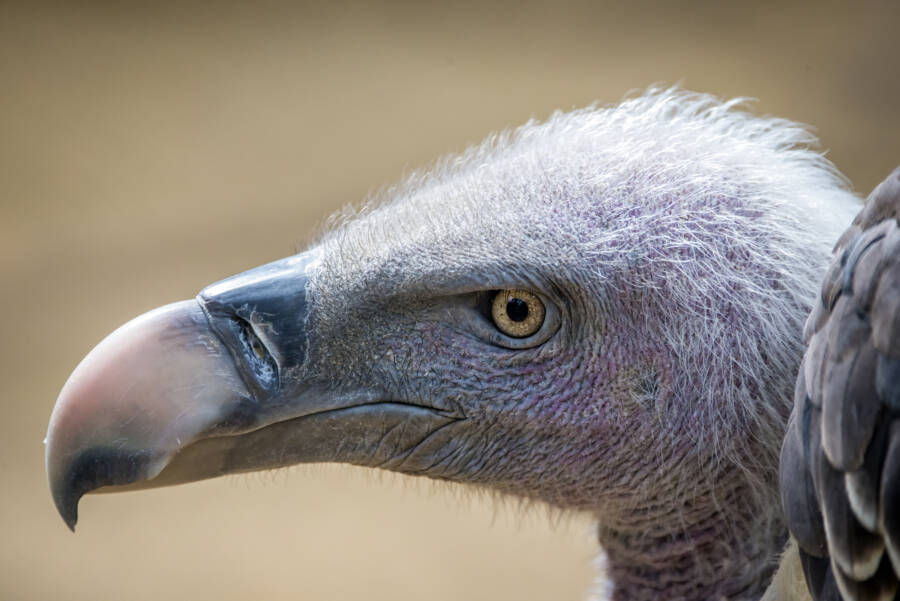 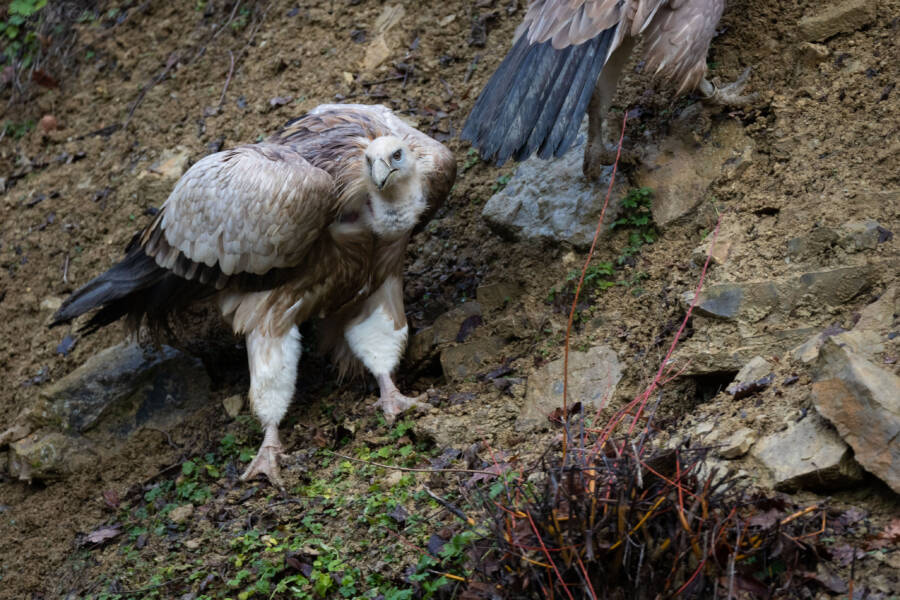 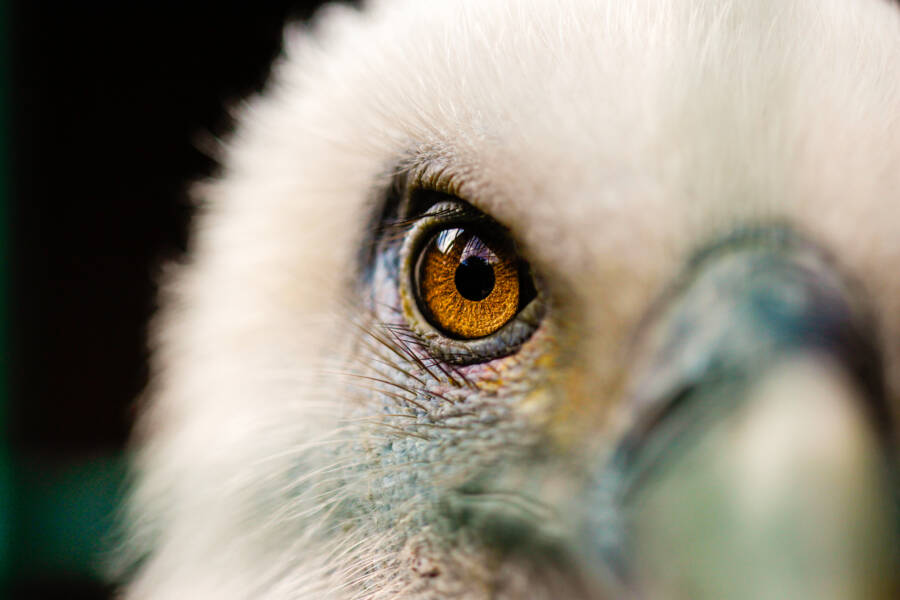 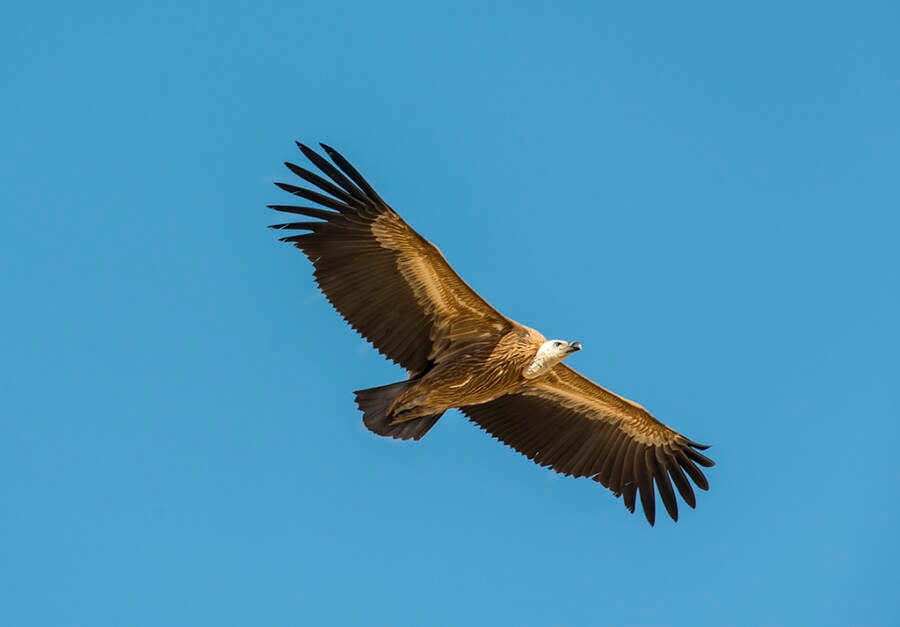 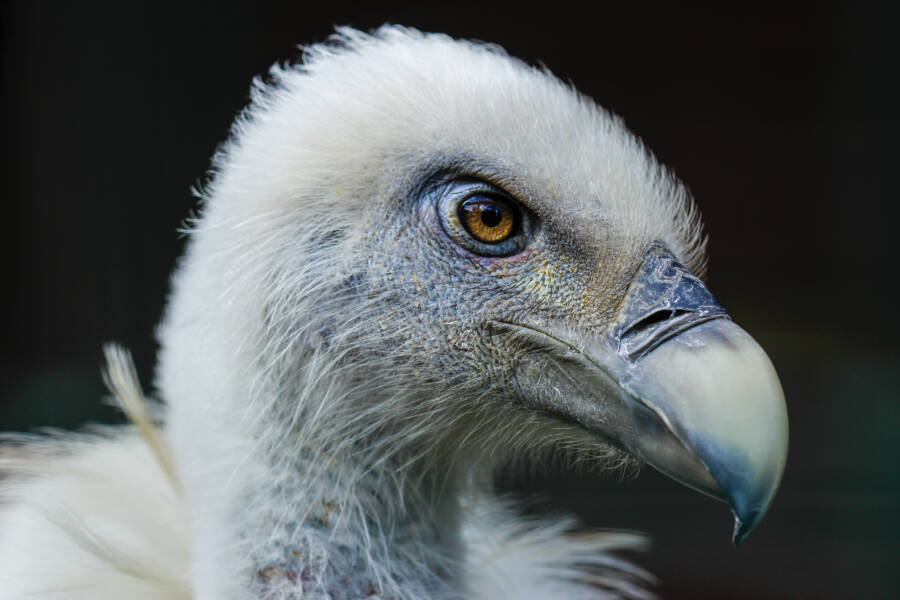 1 of 16
This species is highly hygienic, and routinely gathers in large groups to drink, bathe, and preen at collectively chosen watering holes.Not enough megapixels/Flickr
2 of 16
A group of vultures is known as a venue — and as a kettle when circling in the air.Ignacio Ferre Pérez/Flickr
3 of 16
There are only 23 species known as vultures, with 16 originating in the Old World — including the Griffon vulture — and seven from the Americas.Ignacio Ferre Pérez/Flickr
4 of 16
It only takes 20 minutes for a group of 50 Griffon vultures to reduce a sheep carcass to skin and bones.Ignacio Ferre Pérez/Flickr
5 of 16
The second largest bird in Europe can still fly at speeds of up to 46 miles per hour.Ben Bawden/Flickr
6 of 16
These hefty birds can weigh up to 24 pounds.Tony Evans/Flickr
7 of 16
Griffon vultures typically prefer warmer climates, but are just as resourceful in harsher conditions.mhx/Flickr
8 of 16
The vulture roosts at high altitudes and typically on cliff sides to prevent any disturbance.gwendolen/Flickr
9 of 16
The species can spot a three-foot carcass from up to four miles away.Doug Greenberg/Flickr
10 of 16
Their sense of smell, meanwhile, is highly lacking.Cloudtail the Snow Leopard/Flickr
11 of 16
The species is very vocal and often hunts for food in large groups.hape662/Flickr
12 of 16
The visually off-putting creature is monogamous, and usually pairs with a mate for life.Cloudtail the Snow Leopard/Flickr
13 of 16
The all-seeing eye of a Griffon vulture, ready to reduce an injured sheep to nothing but bones.Mathieu/Flickr
14 of 16
A Griffon vulture soaring through the air. Koshy Koshy/Flickr
15 of 16
Fortunately, the species is listed as "Least Concern" regarding its endangerment status.Mathieu/Flickr
16 of 16 As daytime hunters, Griffon vultures are highly cooperative and circle promising areas together. Once food is sighted, they'll swoop down and begin feasting — maintaining their aerial order upon landing. And when these groups tear through carcasses, their visceral calls add another element of terror.

These animals are highly vocal and communicate frequently with each other through a variety of hisses and chattering — during feeding and while warding off others, respectively. Most of the time, Griffons eat injured or weak cattle or sheep, though any medium-sized carcass with soft tissue will do.

David Attenborough explains how these scary birds use the sun to fly.

A group of these scary birds once devoured the body of a woman who fell off a cliff within 45 minutes — leaving only her clothing behind.

In terms of mating, the species is monogamous and commonly pairs for life. Their courtships occur around the nesting cliffs and they breed in colonies of 15 to 20 couples. It's also been documented, however, that this number can reach a staggering 150 pairs.

The birds cleverly build their nests on cliff sides and rock cavities inaccessible by humans, before one egg is laid and incubated by both parents for around two months. Offspring are typically capable of flying on their own after four months, with their global populations on a steady, productive rise.