Whether these creatures are truly horrifying is in the eye of the beholder, but they are all undeniably fascinating. 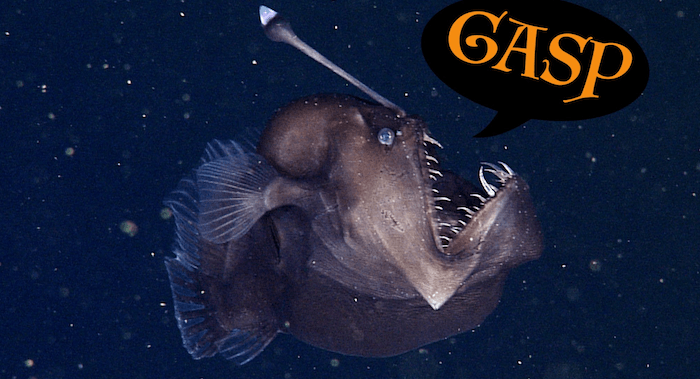 It only makes sense that scientists would choose to share the most disturbing real-life images of creatures of the deep in honor of Halloween this year, as life in the oceans continues to be of the most mysterious and unexplored. Indeed, if there were monsters anywhere, they’d be here.

Scientists that specialize in the depths have demonstrated that it is truly the spookiest place that exists. Their otherworldly images of sea life have been shared as a part of #SpookWar on Twitter.

The hashtag appears to have been started by the National Marine Sanctuary System on Twitter. Their account challenged the U.S. Fish and Wildlife Service’s account to a #SpookWar which has quickly garnered a healthy collection of creepy images.

The inaugural image that appeared in this #SpookWar series was the orange sea toad.

RT @sanctuaries Hey @USFWS! This orange sea toad in @HawaiiReef is unBOOlievably ready for Halloween – are you? How about a #SpookWar? pic.twitter.com/0nR15JTG8G

The sea toad, or coffinfish (Chaunacops species), is an elusive fish that can be seen dwelling in the deepest depths. This creeper is identified by the weird positioning of the gill opening and the “lure apparatus” found at the top of its head.

The fish is native to the central Pacific ocean, and while its commonly found near Hawaii, its origin remains a mystery.

The seemingly light-hearted Twitter exchange that ensued saw ocean life and non-marine creatures battling it out to see which are the scariest. While creepy-crawlies like insects and reptiles may terrify terrestrially, it’s safe to say that the marine creatures take the cake on land and off.

I'm gonna let you finish but the Sarcastic Fringehead looks like the underwater version of of the dinosaur that killed Newman. #spookwar pic.twitter.com/JZzI4AP5I1

This deep sea cucumber is spooked inside out. #spookwar Photo: NOAA OER pic.twitter.com/JmXS55SSST

Do you think spiders are creepy? We think they're cool, especially when they live in the deep sea! https://t.co/NnmG7sFvwg #SpookWar #Halloween pic.twitter.com/IOcVRA7dc7

What's creepier than a #deepsea lizardfish?

You can't have #Halloween in the ocean without ghost sharks! This chimaera is really getting into the Halloween spirit. #EarthIsBlue #SpookWar pic.twitter.com/GIWhybn70t

We'd be jelly of your content, @USFWS, but there's LOADS more spook to be found beneath the sea. #SpookWar
Photo: A blood-red Tiburonia granrojo jellyfish, NOAA/@MBARI_News pic.twitter.com/dtPjpyOBAZ

Tails from the crypt! You can't unsee these creepy Chinook Salmon zombies from the underworld #spookwar #Halloween pic.twitter.com/YzG0Qi13cp

Hey @USFWS and @sanctuaries did you know Halloween is right around the corner? Iʻm hoping to see some deep sea critter costumes this year. Maybe a Squat Lobster! #spookwar Photo: NOAA OER pic.twitter.com/hmV7rmRkr5

Whether these creatures are truly horrifying or not is in the eye of the beholder, but they’re undeniably all fascinating.

A part of what makes ocean life so special is the unknown that it presents. The ocean harbors life that has been around since the dinosaur age and that has hidden in the shadows of the deep blue sea since.

Sharing the strange wonders that the sea has to present is arguably the year’s best Halloween social media trend.

Next, read about how you can understand the depth of the ocean in perspective. Then, check out the 7 most mysterious deep sea creatures.