Although the kayaker may not have done anything to deserve the hit, there's a simple explanation as to why it happened. 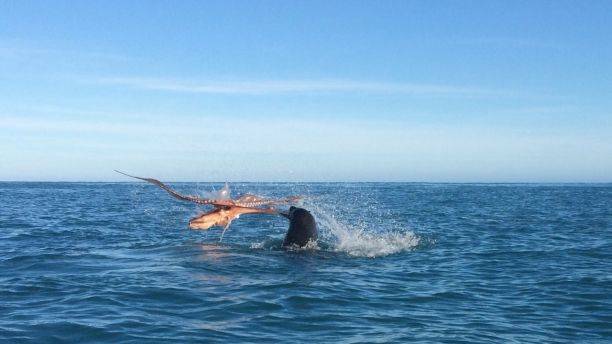 Footage of a seal spontaneously slapping the face of a kayaker with an octopus has gone viral — and for good reason: it’s hilarious.

The incident happened off the coast of Kaikoura on New Zealand’s South Island, which has a large population of fur seals.

Taiyo Masuda says he was on a GoPro-funded group kayaking trip when he captured his friend as he was hit by the octopus on video.

The video shows the seal inching towards the surface of the ocean, then jumping out of the water with the octopus in its mouth, and whipping it across the face of Masuda’s fellow kayaker.

Kyle Mullinder, the kayaker who was hit by the octopus, told Yahoo News that he and his group saw the seal with the octopus prior to the recorded incident.

“We were just sitting out in the middle of the ocean and then this huge male seal appeared with an octopus and he was thrashing him about for ages,” he continued.

Mullinder observed the fight between the seal and the octopus when the seal suddenly lunged in his direction, and visibly stunned him.

“He thrashed it in mid-fight and my face happened to be in the wrong place at the wrong time,” Mullinder explained, “I was like ‘mate, what just happened?’”

While in the video it looks like the seal had an unprovoked vendetta against Mullinder, there is an explanation as to why this happened.

According to Rochelle Constantine, an associate professor at the School of Biological Sciences at the University of Auckland, the seal was probably trying to rip a tentacle off of the octopus so that it could eat it.

“I have seen seals doing this before, it’s not an unusual sight but normally there isn’t a person in the way,” said Constantine.

“Often we see (seals) swallowing the tentacle at the surface like a large strand of spaghetti,” Constantine says that seals repeat this motion multiple times to rip the tentacles off one by one. She believes that the seal would then eat the rest of the octopus’ body once all tentacles have been consumed.

But the plain facts regarding the incident don’t take away from its hilarity: “We instantly started laughing so (hard), we were talking about this all week,” Masuda wrote to USA Today in an email.

Mullinder may forever be known in his friend group as the guy who was slapped in the face with an octopus by a seal, but we suppose there are worse things to be known for.

Next, check out this video of an adorable baby seal getting rescued from a fishing net. Then, find out what happened when researchers gave MDMA to octopuses.