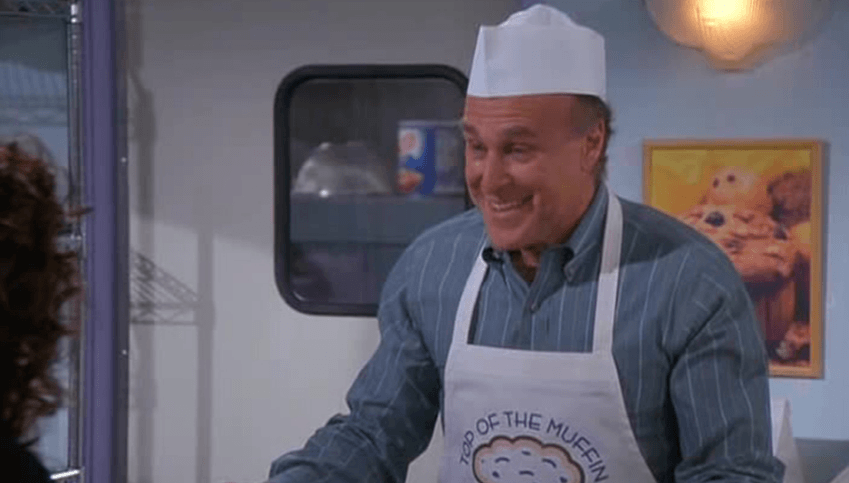 More than 20 years after writing the script for “The Muffin Tops” episode of Seinfeld, Spike Feresten is (jokingly) seeking restitution from McDonald’s for stealing his idea. As part of an effort to boost breakfast sales, the fast food giant announced that at select locations it will begin selling “muffin toppers” – just the tops of muffins.

As Elaine Benes noted in “The Muffin Tops” back in 1997, “It’s the best part. It’s crunchy, it’s explosive. It’s where the muffin breaks free of the pan and sort of does its own thing. I’ll tell you, that’s a million dollar idea right there. Just sell the tops.”

McDonald’s is hoping that’s the case, and then some.

The irony of course is that in the episode, Mr. Lippman steals Elaine’s idea and opens a store called Top of the Muffin To You! But sales lag, so he seeks Elaine’s counsel. After he promises her 30% of the profits, Elaine tells Lippman what he’s doing wrong.

“You’re making just the muffin tops. You gotta make the whole muffin. Then you pop the top, toss the stump.”

It’s unclear if McDonald’s intends on making the entire muffin or just the top.

“What took so long?” Feresten asked in an interview with TMZ? “In the previous season, I wrote an episode called ‘The Soup Nazi’ and immediately, the soup business took off. I think the real Soup Nazi in New York formed his own company and he’s opened 220 restaurants… Now ‘The Muffin Tops’ is the next year, and I really did think at the time, ‘Now here we go. Now we’re going to have a big muffin tops craze in the United States.’ It never happened. It took 21 years.”

“First I’d like to say directly to McDonald’s, you need to use the slogan,” said Feresten. “If you’re going to take ‘The Muffin Tops’ episode, you’ve gotta use our slogan, which is ‘Top of the Muffin To You!’ Exclamation point. That’s the most important part of it. Secondly, you’ll have to pay me a billion dollars.”

This isn’t the first time the McDonald’s and Seinfeld worlds have collided. In the 1995 episode “The Maestro,” Kramer retains attorney Jackie Chiles to sue a coffee shop chain after he spilled scalding hot coffee on himself, causing a nasty burn.

That episode drew inspiration from a 1992 incident in which a 79-year-old New Mexico woman suffered third degrees burns when she spilled 180 degree fahrenheit coffee on herself at a McDonald’s drive thru. She was awarded $2.86 million by a jury, though in the end she was awarded just $640,000.

Kramer wasn’t as fortunate. Ultimately he walked away with a lifetime supply of free coffee.

While Spike Feresten probably won’t get any money from McDonald’s, perhaps he’ll get all the free muffin tops he wants.

Next, read about serial killer Joel Rifkin and his plotline in Seinfeld. Then check out Takanakuy – Peru’s Festivus-like holiday where everyone fights.