The Story Of Tarrare, The Insatiable Glutton Who Ate Everything From Human Flesh To Live Eels

Tarrare, an 18th-century French showman, could eat enough to feed 15 people and swallow cats whole — but his stomach was never satisfied. 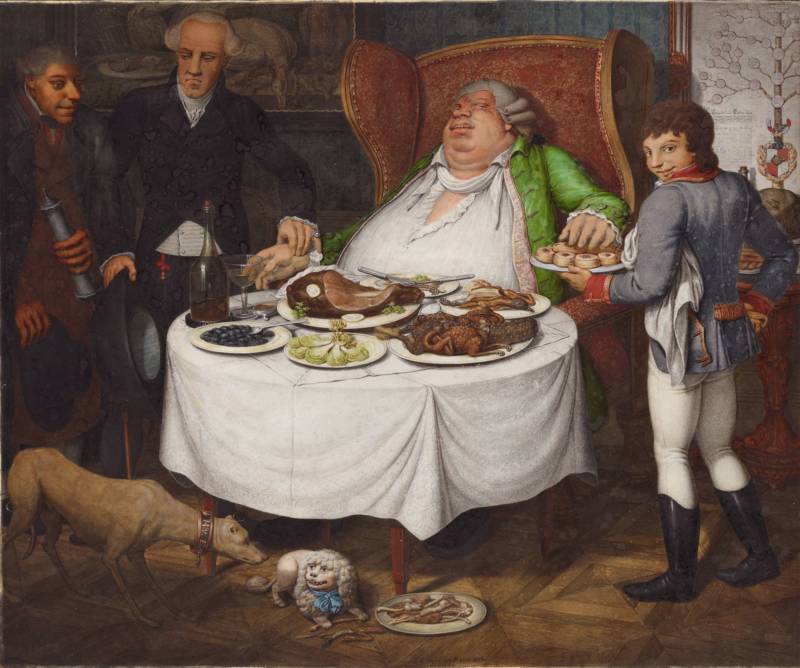 Wikimedia Commons“Der Völler” by Georg Emanuel Opitz. 1804. No images of Tarrare himself are known to exist.

They found Tarrare in a gutter, shoveling fistfuls of garbage into his mouth.

It was the 1790s and Tarrare — born circa 1772 and known only as “Tarrare” — was a soldier in the French Revolutionary Army who was infamous for his almost inhuman appetite. The army had already quadrupled his rations, but even after downing enough food to feed four men, he would still scavenge through the refuse piles, guzzling down every discarded shred of waste they’d thrown away.

And the strangest part of all this was that he always looked as though he were starving. The young man barely weighed 100 pounds and he seemed constantly tired and distracted. He was showing every possible sign of undernourishment – except, of course, that he was eating enough to feed a small barracks.

There must have been a few of his comrades who just wanted to get rid of him. Tarrare, after all, not only burned through the army’s rations but also stunk so horribly that a visible vapor rose out of his body like real-life cartoon stink lines.

And for two military surgeons, Dr. Courville and Baron Percy, Tarrare was too fascinating to ignore. Who was this strange man, they wanted to know, who could have a wheelbarrow of food poured down his throat and still stay hungry? 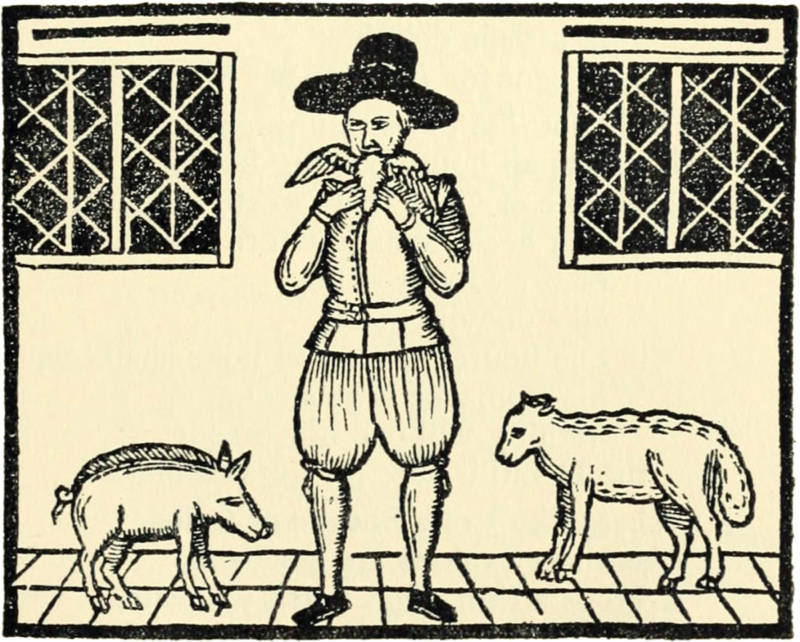 Tarrare’s strange appetite had been with him his whole life. It was completely insatiable, so much so that when he was a teenager, his parents, unable to afford the massive piles of food it took to feed him, kicked him out of their house.

He then made his own way as a traveling showman. He fell in with a band of prostitutes and thieves who would tour France, putting on acts while they picked the audience’s pockets. Tarrare was one of their star attractions: the incredible man who could eat anything.

His massive, deformed jaw would swing open so wide that he could pour a whole basket full of apples down his mouth and hold a dozen of them in his cheeks like a chipmunk. He would swallow corks, stones, and live animals whole, all to the joy and disgust of the crowd.

According to those who saw his act:

“He seized a live cat with his teeth, eventrated [or disemboweled] it, sucked its blood, and ate it, leaving the bare skeleton only. He also ate dogs in the same manner. On one occasion it was said that he swallowed a living eel without chewing it.”

Tarrare’s reputation preceded him everywhere he went, even in the animal kingdom. Baron Percy, the surgeon who took such an interest in his case, mused in his notes:

“The dogs and cats fled in terror at his aspect, as if they had anticipated the kind of fate he was preparing for them.”

The Man With The Horrible Stench Leaves Doctors Baffled 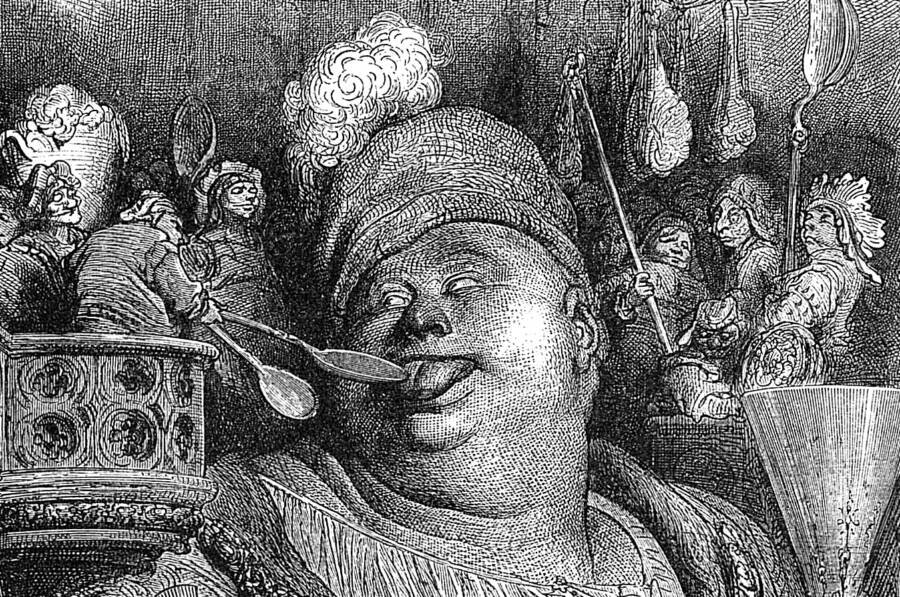 Wikimedia CommonsGustave Doré illustration from Gargantua and Pantagruel, circa 1860s.

Tarrare baffled the surgeons. At the age of 17, he weighed just 100 pounds. And although he ate live animals and trash, he seemed to be sane. He was seemingly just a young man with an inexplicably insatiable appetite.

His body, as you might imagine, wasn’t a pretty sight. Tarrare’s skin had to stretch to incredible degrees to fit all of the food he shoved down his gullet. When he ate, he would blow up like a balloon, especially in his stomach region. But shortly after, he would step into the bathroom and release nearly everything, leaving behind a mess that the surgeons described as “fetid beyond all conception.”

When his stomach was empty, his skin would sag down so deeply that you could tie the hanging folds of skin around his waist like a belt. His cheeks would droop down like an elephant’s ears.

These hanging folds of skin were part of the secret of how he could fit so much food in his mouth. His skin would stretch out like a rubber band, letting him stuff whole bushels of food inside of his massive cheeks.

But mass consumption of such quantities of food created an awful smell. As the doctors worded it in his medical records:

“He often stank to such a degree that he could not be endured within the distance of twenty paces.”

It was always on him, that horrible stench that seeped off of his body. His body was hot to the touch, so much so that the man dripped a constant sweat that stunk like sewer water. And it would rise off him in a vapor so putrid that you could see it drifting around him, a visible cloud of stink.

Tarrare’s Secret Mission For The Military 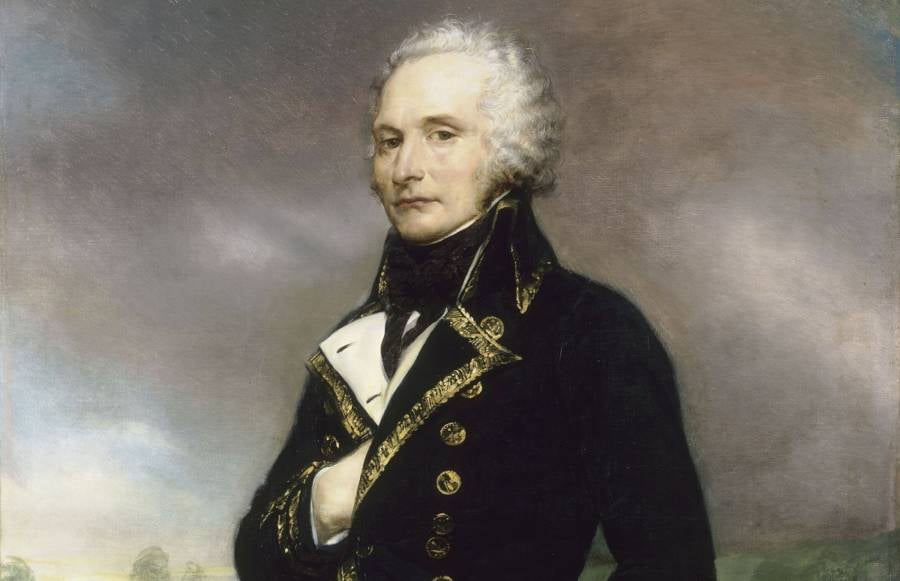 Wikimedia CommonsAlexandre de Beauharnais, the general who put Tarrare to use on the battlefield. 1834.

By the time the doctors found him, Tarrare had given up his life as a sideshow performer to fight for France’s liberty. But France didn’t want him.

He was pulled off the front lines and sent into a surgeon’s room, where Baron Percy and Dr. Courville ran test after test on him, trying to understand this medical marvel.

One man, though, believed that Tarrare could help his country: General Alexandre de Beauharnais. France was now at war with Prussia and the general was convinced that Tarrare’s strange condition made him a perfect courier.

General de Beauharnais ran an experiment: He put a document inside of a wooden box, had Tarrare eat it, and then waited for it to pass through his body. Then he had some poor, unfortunate soldier clean through Tarrare’s mess and fish out the box to see if the document could still be read.

It worked – and Tarrare was given his first mission. Disguised as a Prussian peasant, he was to sneak past enemy lines to deliver a top-secret message to a captured French colonel. The message would be hidden inside of a box, safely enclosed inside of his stomach.

A Botched Attempt At Espionage 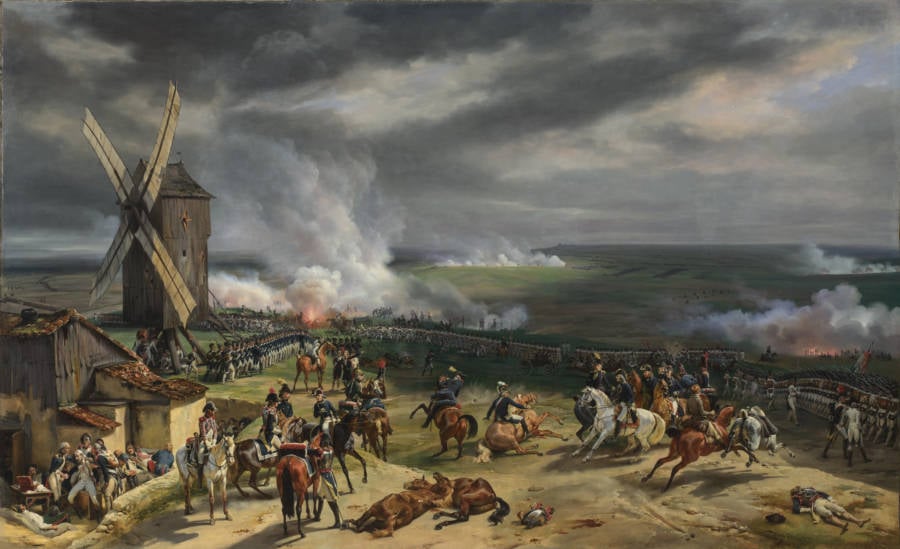 Horace Vernet/Wikimedia CommonsA scene from the Battle of Valmy, fought between France and Prussia in 1792.

Tarrare didn’t get far. Perhaps they should have expected that the man with sagging skin and a putrid stench that could be smelled from miles away would attract attention instantly. And, as this supposed Prussian peasant couldn’t speak German, it didn’t take long for the Prussians to figure out that Tarrare was a French spy.

He was stripped, searched, whipped, and tortured for the better part of a day before he gave up the plot. In time, Tarrare broke and told the Prussians about the secret message hiding in his stomach.

They chained him to a latrine and waited. For hours, Tarrare had to sit there with his guilt and his grief, struggling with the knowledge that he’d let down his countrymen while he waited for his bowels to move.

When they finally did, though, all the Prussian general found inside the box was a note that simply asked the recipient to let them know if Tarrare had delivered it successfully. General de Beauharnais, it turned out, still didn’t trust Tarrare enough to send him off with any real information. The whole thing had just been another test.

The Prussian general was so furious that he ordered Tarrare to be hung. Once he’d calmed down, though, he felt a little pity for the flabby man openly sobbing on his gallows. He had a change of heart and let Tarrare go back to the French lines, warning him with a quick thrashing never to try a stunt like this again. 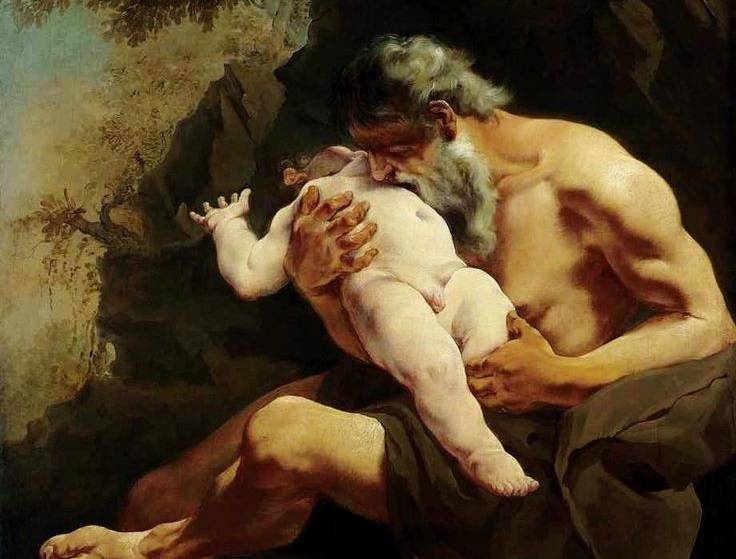 Safely back in France, Tarrare begged the army never to make him deliver another secret message. He didn’t want to be this way anymore, he told them, and he pleaded with Baron Percy to make him like everyone else.

Percy did his best. He fed Tarrare wine vinegar, tobacco pills, laudanum, and every medicine he could imagine in the hopes of quenching his incredible appetite, but Tarrare stayed the same no matter what he tried.

If anything, he was hungrier than ever. No amount of food would satisfy him. The insatiable Tarrare sought out other meals in the worst possible places. During one desperate fit of hunger, he was caught drinking the blood that had been removed from the hospital’s patients and even eating some of the bodies in the morgue.

When a 14-month-old baby disappeared and rumors started to spread that Tarrare was behind it, Baron Percy got fed up. He chased Tarrare out, forcing him to fend for himself from then on, and tried to erase the whole disturbing affair from his mind.

The Nauseating, Baffling Autopsy Of Tarrare 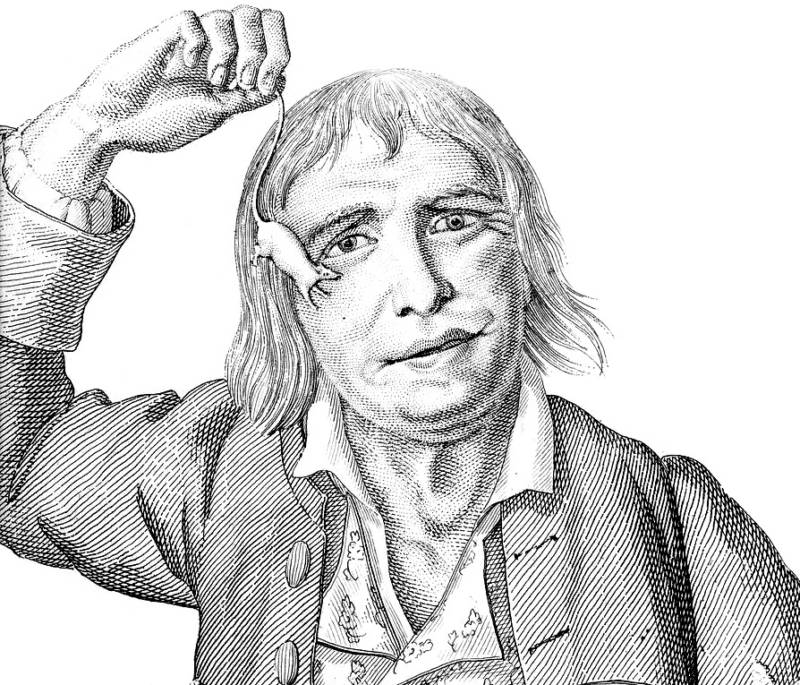 Wikimedia CommonsJacques de Falaise, another man with polyphagia who drew many comparisons to Tarrare. 1820.

Four years later, though, Baron Percy received word that Tarrare had turned up in a hospital in Versailles. The man who could eat anything was dying, Percy learned. This would be his last chance to see this medical anomaly alive.

Baron Percy was with Tarrare when he died of tuberculosis in 1798. For all the horrible smells that had drifted out of Tarrare while he was alive, nothing compared to the stench that poured out when he died. The doctors with him struggled to breathe through the noxious odors that filled every inch of the room.

The description of the autopsy is nothing short of disgusting:

“The entrails were putrefied, confounded together, and immersed in pus; the liver was excessively large, void of consistence, and in a putrescent state; the gall-bladder was of considerable magnitude; the stomach, in a lax state, and having ulcerated patches dispersed about it, covered almost the whole of the abdominal region.”

His stomach, they found, was so massive that it very nearly filled his entire abdominal cavity. His gullet, likewise, was unusually wide, and his jaw could stretch so wide open that, as the reports put it: “a cylinder of a foot in circumference could be introduced without touching the palate.”

Perhaps they could have learned more about Tarrare’s strange condition – but the stench became so overpowering that even Baron Percy gave up. The doctors stopped the autopsy midway through, unable to bear a single second more of his stench.

They’d learned one thing, though: Tarrare’s condition wasn’t in his mind. Every strange thing that he’d done had started with a genuine, constant biological need to eat. The poor man’s every experience had been dictated by the strange body he’d been born with, one that cursed him to a life of eternal hunger.

Next, learn about Jon Brower Minnoch, the heaviest man who ever lived. Then, discover the tragic, seldom-heard stories behind history’s best-known “freak show” performers.