Sérgio Vieira de Mello was greatly admired due to his intellect and charisma, but his work as a global peacemaker was cut short by a devastating bombing. 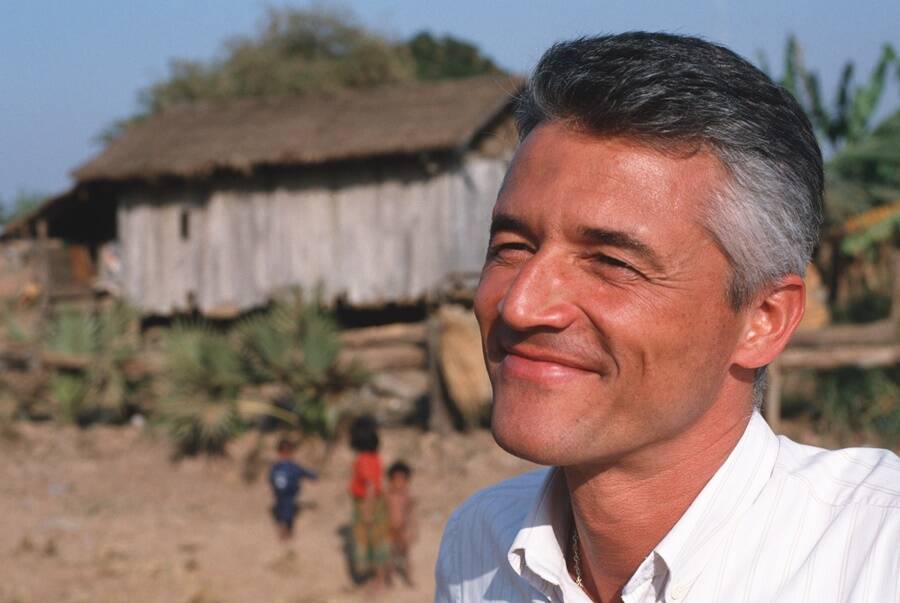 Peter Charlesworth/LightRocket via Getty ImagesSérgio Vieira de Mello was a respected diplomat who was poised to become the next leader of the U.N. before his tragic death on-duty in 2003.

On Aug. 19, 2003, a bomb exploded in Baghdad’s Canal Hotel inside the United Nations compound. The explosion injured hundreds of people and killed 23, among them Sérgio Vieira de Mello, a high-ranking U.N. official who had been poised to become the international body’s next secretary-general.

Vieira de Mello’s death was a shock to many — and a great loss for the downtrodden and disenfranchised the world over. The story of his incredible work to bring peace to the world’s deadliest conflict areas inspired scores of people the world over (and is featured in the 2020 Netflix biopic drama Sergio).

From his student protest days in 1960s France to his work with refugees in Africa to tracking down landmines in Cambodia, this is the amazing story of international peacekeeper Sérgio Vieira de Mello and the horrific bombing that ended his life.

Who Was Sérgio Vieira de Mello? 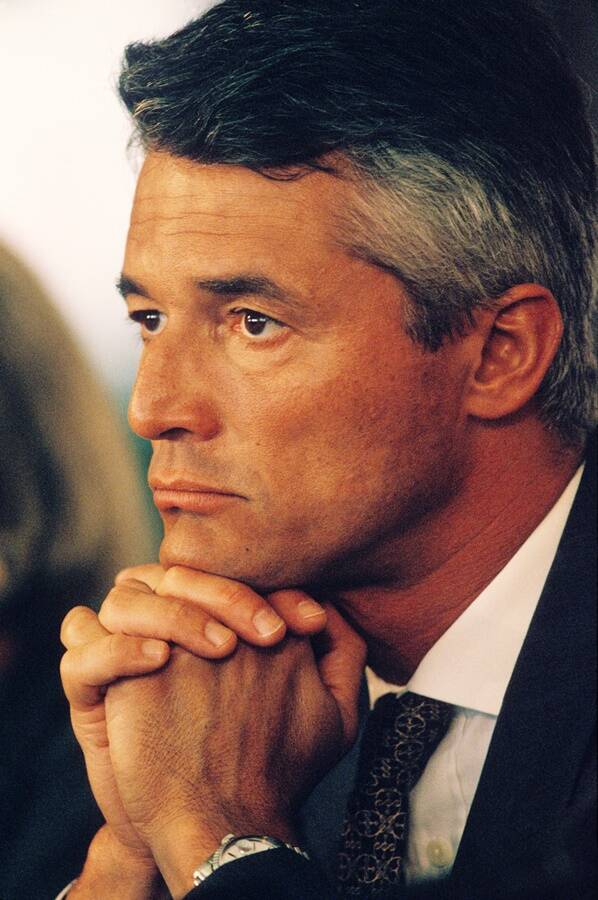 Jason Bleibtreu/Sygma via Getty ImagesSérgio Vieira de Mello began his career at the United Nations in 1969 when he joined the U.N. High Commissioner for Refugees (UNHCR) office as a project manager.

Sérgio Vieira de Mello had always been an idealist. Born in Rio de Janeiro, Brazil, in 1948, the charming diplomat studied philosophy at the prestigious University of Paris (Panthéon-Sorbonne). He joined student protests during the economic unrest that engulfed France in May 1968 and, as a result, acquired a scar above his right eye after being beaten by police.

In 1969, Vieira de Mello joined the Office of the United Nations High Commissioner for Refugees (UNHCR) in Geneva. He was sent on his first field assignment two years later during the agency’s emergency response toward the 10 million Bengali refugees forced out of what was then eastern Pakistan.

Despite spending most of his adult life working for the U.N., Sérgio Vieira de Mello had at first been disillusioned by the bureaucratic red tape often involved in U.N. affairs. 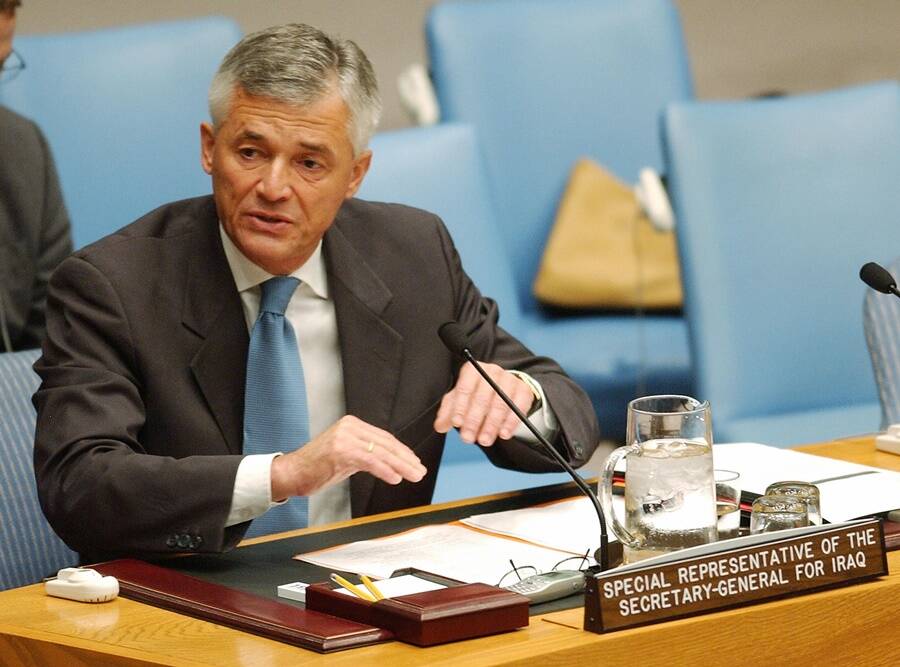 But during that first field assignment in Bangladesh, where he helped organize the distribution of food and shelter to migrating Bengalis, the young U.N. worker believed he had found his true calling. He saw that he could make a real impact through his work at the U.N. when he was involved directly in matters on the ground.

“Bangladesh was a revelation for Sérgio,” his friend da Silveira recalled. “By being in the field, he recognized a part of himself he had never seen before. He understood he was a man of action. He was made for it.”

The Brazilian’s compassion to alleviate human suffering through direct action combined with his aptitude for diplomacy and his disarming charm followed him throughout his career and propelled him toward the higher echelons within the U.N. 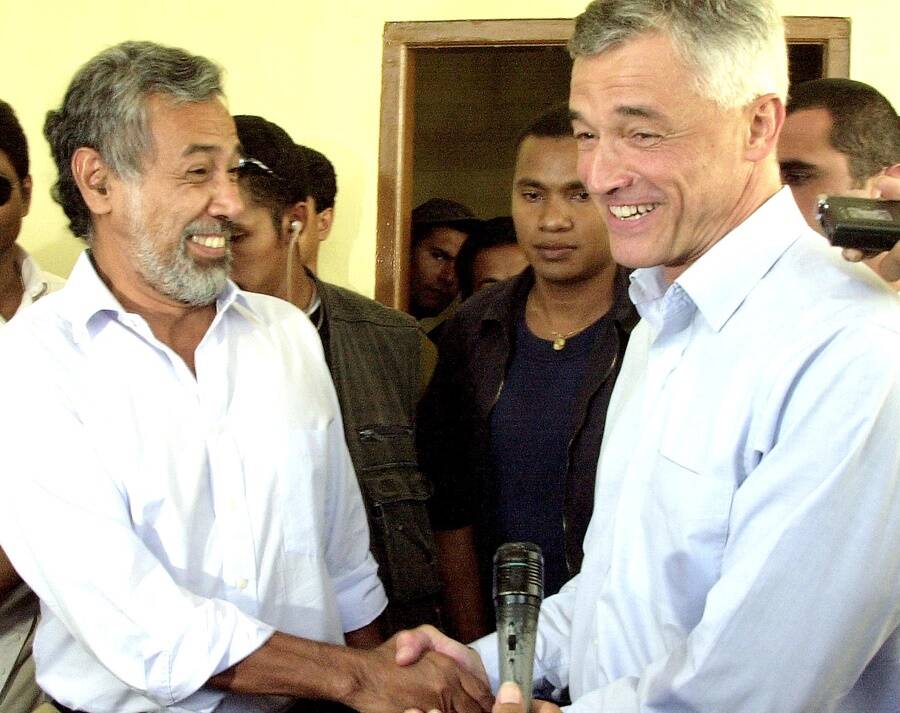 In the decades that followed, Sérgio Vieira de Mello would become one of the U.N.’s most valuable envoys, traveling to the world’s most grief-stricken places to push for diplomacy while making sure aid from the U.N. made its way to victims of conflict.

He handled refugees in Mozambique during the civil war after its independence from Portugal, became the political adviser to the U.N. peacekeepers in Lebanon, and managed humanitarian problems in Cambodia. By 1996, Sérgio Vieira de Mello became assistant high commissioner for the office.

One of his more high-profile assignments was in 2000, when he led the U.N. Transitional Administration which acted as a temporary governing body during East Timor’s rocky transition into sovereignty after the small nation won full independence from Indonesia. He also worked in Kosovo, Cyprus, Sudan, and the Congo, among other places.

In September 2002, Sérgio Vieira de Mello was appointed as the U.N.’s high commissioner for human rights. It was a prestigious title but his heart belonged to the relief work being done in the field.

“I would take life under siege any day over endless staff meetings and paperwork. I was born to be in the field,” he told Samantha Power, a journalist-turned-U.N. ambassador in her book Chasing the Flame: Sergio Vieira de Mello and the Fight to Save the World. 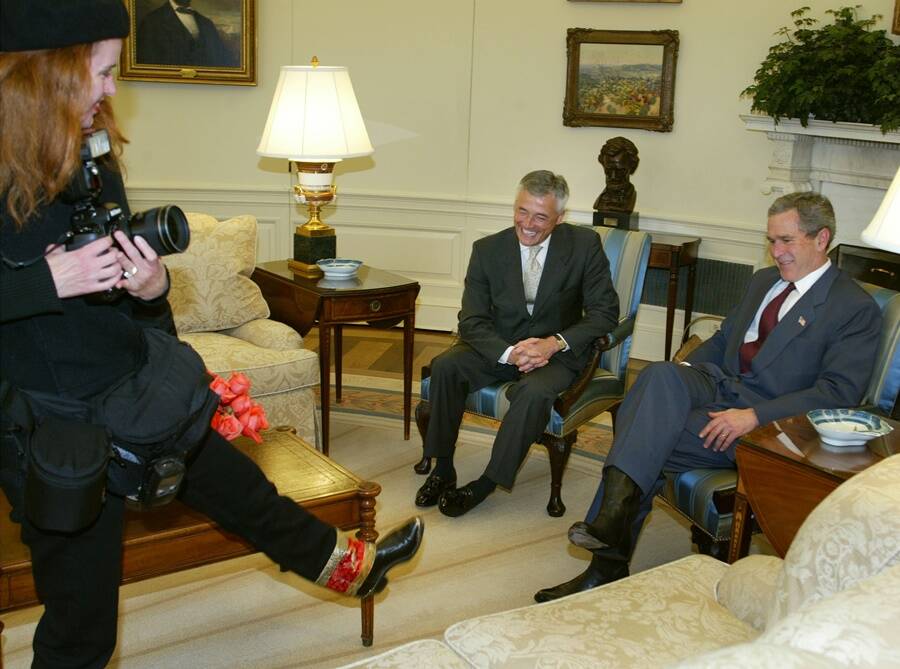 Mark Wilson/Getty ImagesVieira De Mello’s success in charming US President George W. Bush, something many diplomats had failed to do, contributed to his appointment as special envoy to Iraq.

On May 29, 2003, Sérgio Vieira de Mello was chosen by then-U.N. Secretary-General Kofi Annan to be its special representative in Iraq, a crucial position given the country’s disarray following the invasion of American and British forces two months prior.

In his new high-profile position, Vieira de Mello’s biggest challenge was bringing back stability to a war-torn Iraq occupied by foreign forces. His main objective was to lead the U.N.’s efforts to help the country rebuild and promote humanitarian relief — all while navigating encroaching US presence under President George W. Bush who many say warmed easily to the Brazilian diplomat.

Although Sérgio Vieira de Mello had built a cooperative relationship with American officials in Iraq with ease, the special envoy made his sympathies with the Iraqi people clear.

“It is traumatic. It must be one of the most humiliating periods in their history. Who would like to see their country occupied. I would not like to see foreign tanks in Copacabana,” he said referring to a famous beach in his home country. 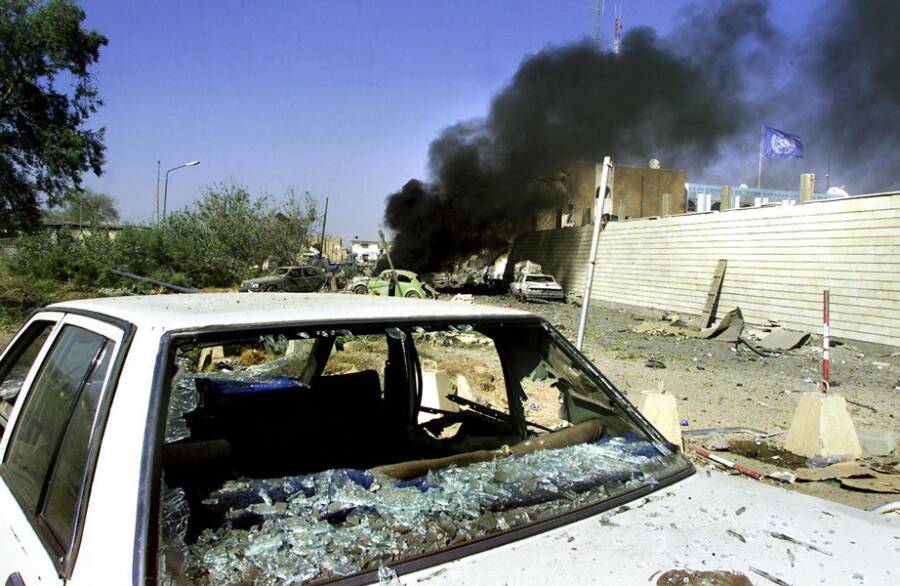 Sabah Arar/AFP via Getty ImagesAftermath of the car bomb blast at the United Nations headquarters at the Canal Hotel in eastern Baghdad.

Sérgio Vieira de Mello’s appointment as special envoy to Iraq was taken by many as an endorsement of his capabilities as a world diplomat — and possibly as Annan’s successor as head of the U.N.

But on Aug. 19, 2003, tragedy struck. A massive truck bomb rode into the U.N. compound in Iraq which was located in the Canal Hotel. The bomb killed 23 people, including Sérgio Vieira de Mello, and wounded many others, including American academic Gil Loescher, who was with Vieira de Mello when the bomb exploded. Both men were caught underneath mounds of rubble after the blast tore apart Vieira de Mello’s office.

The two men were finally discovered by soldiers who managed to free Loescher but only after amputating his legs with a rusting hacksaw. As Loescher was airlifted out of the debris, Sérgio Vieira de Mello died, still stuck under the rubble.

“The loss of Sérgio Vieira de Mello is a bitter blow for the United Nations and for me personally,” then-U.N. Secretary-General Kofi Annan said in a statement following his colleague’s tragic demise. “I can think of no one we could less afford to spare.” 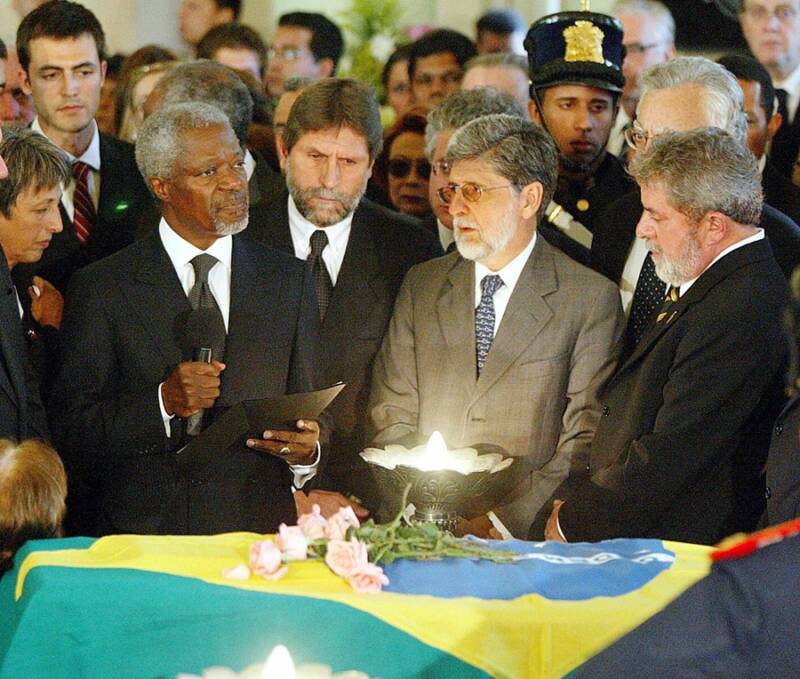 Antonio Scorza/AFP via Getty Images“I can think of no one we could less afford to spare,” then-UN Secretary-General Kofi Annan said of Vieira de Mello’s death.

According to the New York Times, Vieira de Mello was committed to reflecting the U.N.’s intentions of supporting the people of Iraq, not help push American interests. He had American troops remove an armored cavalry unit that had been posted beside the entrance to the U.N. compound and open up a closed lane on the adjoining highway.

The decision, though noble in its nature, may have contributed to his death as it gave the bombing truck an easy path into the complex.

The bombing was launched by Al-Qaeda. Experts say the high-profile envoy may have gotten onto their hit list after Vieira de Mello led negotiations of East Timor’s separation from the Muslim majority country of Indonesia. The terrorist group also believed he was a US crony working to push American interests in Iraq under the guise of the U.N.

But as writer Christopher Hitchens wrote in Slate two years after the U.N. envoy’s death: “Those who look for the connection will be doomed to ask increasingly stupid questions and to be content with increasingly wicked answers.”

That is to say, there’s little use in searching for reason behind tragedies like the Canal Hotel bombing which purposely targeted Sérgio Vieira de Mello because of his humanitarian work. He is survived by his wife, Annie, and their two sons, Adrien and Laurent. 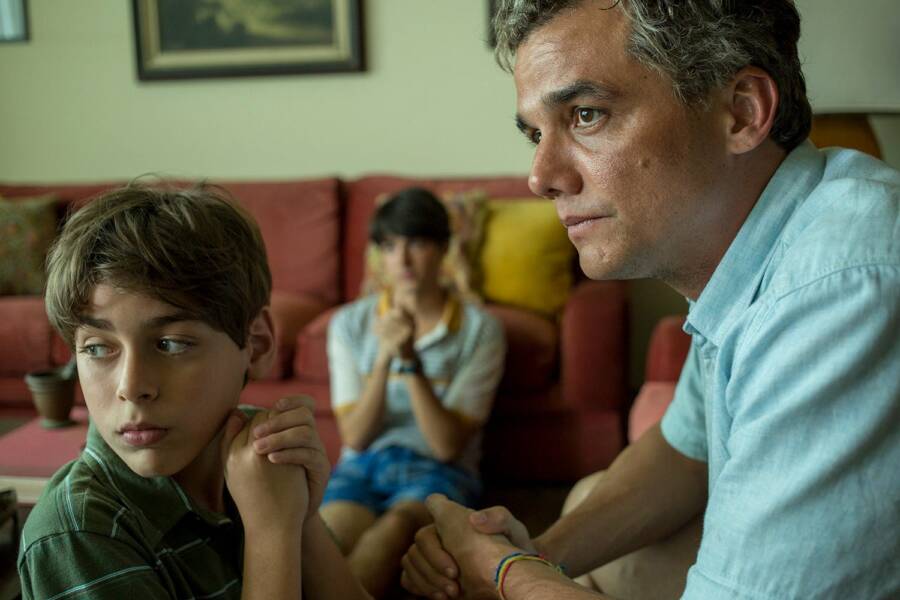 In 2009, a documentary following Sérgio Vieira de Mello’s humanitarian work and the significant role he played in the U.N. titled Sergio was released on HBO after its premiere at the Sundance Film Festival. The idea for the documentary was based on Samantha Power’s book which is considered the first full account of the Canal Hotel bombing.

As the documentary unfolds, his life’s work is recounted through compelling accounts from those who knew him and footage during Vieira de Mello’s time in the field. In 2020, Baker will be releasing a feature film adaptation of his documentary on Netflix, starring actor Wagner Moura, who will portray the late diplomat.

“To be honest, I didn’t think much of the United Nations. I’d seen too many U.N. officials arrogantly careering through poverty-stricken countries in their gleaming white SUVs, seemingly indifferent to the suffering right in front of their eyes,” said Greg Barker, the director of Sergio.

“Yet the more I heard about Sérgio, the more intrigued I became. He seemed different, a complicated hero for our complicated times.”

Now that you’ve read about Sérgio Vieira de Mello, read about seven of the greatest humanitarians in history, or the story of Samantha Smith, a 10-year-old American girl whose letter to the leader of the Soviet Union helped thaw chilly relations between the world’s two superpowers at the height of the cold war.