The Sluggish Life Of An Olm, A Blind Salamander That Can Remain Motionless For Years

The olm can live to be 100 and often goes years without food, sex, or even moving. One was recently observed doing absolutely nothing for 2, 569 days straight. 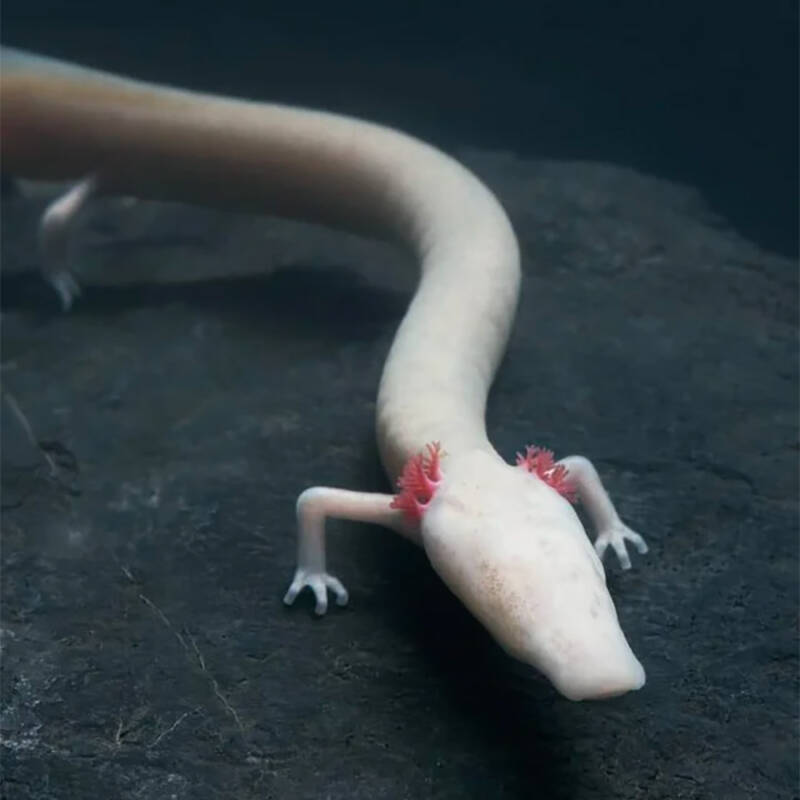 TwitterThe olm is a cave salamander found in the underwater cave systems of Bosnia and Herzegovina, Croatia, Italy, and Slovenia. They are extremely cautious with their energy, moving about 16 feet on average in an entire year.

If there’s anything salamanders are known for, it’s regrowing a lost tail and having a surprisingly long lifespan. One species of salamander stands out from the rest, however: the olm. While it’s long been known that the olm — scientific name Proteus anguinus — can live to be 100 years old, that century of life isn’t at all like those of other long-lived animals. Compared to an olm, a Galapagos giant tortoise looks downright excitable.

Recently, a group of researchers led by Gergely Balázs of Eötvös Loránd University in Hungary studied an olm population in the eastern Herzegovinian region of Bosnia and Herzegovina. Their research, published in the Journal of Zoology, focused squarely on those living in aquatic cave systems.

The researchers found that these small, albino cave-dwellers barely moved more than 33 feet in over a decade. Even more remarkable, however, the researchers observed one particularly lazy olm do absolutely nothing, not even move, for 2,569 days straight.

The Biology And Behavior Of The Olm

Olms have no real predators to worry about in the cave systems they call home and thanks to their metabolism, they can go years without needing to eat, so their longevity isn’t all that surprising — even if it sounds incredibly boring.

The olm is the only known species of its genus and though they live in absolute darkness for their entire lives, they have retained some ability to perceive light. Their other senses, meanwhile, are more sensitive as a result.

An informative look at the lives of olms, courtesy of The Smithsonian Channel.

These “slimy creepy crawlies,” as they’re called by some in Slovenia, colonized the aquatic caves of Bosnia and Herzegovina, Croatia, Italy, and Slovenia at some point between 8.8 million and 20 million years ago and have been there ever since.

In terms of their sluggish movement, they only move when they need to eventually eat something or when it comes time to mate, though the olm’s mating cycle only comes around once every 12.5 years. As for their dietary habits, the olm relies on what limited options are available, typically small crustaceans like shrimp and snails — and sometimes insects if they’re lucky.

For a blind amphibian living in complete darkness, they basically have to take what they can get, but the olm has found a remarkable way to adapt to the extreme scarcity of calories: use as little energy as possible. For Balázs and his team, understanding this adaptation and the habitat that produced it sheds important light on extreme adaptation in an animal population, something that is likely to become more urgent as climate change continues to disrupt delicate ecosystems around the world.

Footage of an olm salamander swimming in its natural environment.

“The low reproductive activity of the species together with the reported extreme site fidelity makes this top predator of aquatic cave communities highly vulnerable and a sensitive bio-indicator of habitat-changing human activities,” the researchers write.

“Most studies carried out on the species to date are based on laboratory studies,” they add, “resulting in a severe lack of ecological data from natural populations studied in their original habitat.”

While Balázs and his team specifically set out to study these animals in their natural environs, the research team quickly discovered that there was far more to learn than their lack of movement.

“Aquatic cave ecosystems are important for evolutionary ecologists as an overlooked model system and for conservation biologists as a vulnerable and unique habitat, but we also need to improve our understanding of how these unique ecosystems perform ecological services that benefit ecosystems beyond cave systems, including human access to fresh water.”

In order to track the animals, the researchers used a “capture-mark-recapture” technique which allowed them to keep up with the seldomly-slithering creatures over several years. Diving into the underwater caves, the team would capture an olm by hand, mark it, then release it. 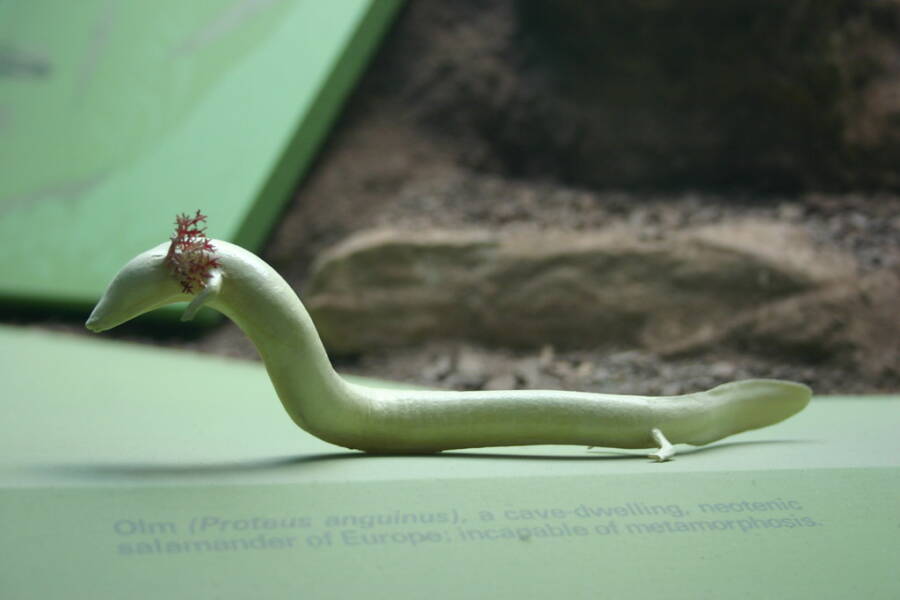 Flickr/Ryan SommaThe research team hopes this study will spur other experts to study olms in their natural habitat, rather than in artificial laboratory settings.

They were able to mark a total of 19 individual olms, allowing the team to track their movement over an extended period with very little activity. Some were tracked for 28 months while the others were tracked for eight years. What they found might not be the most kinetic data around, but it still paints a fascinating picture.

“They are hanging around, doing almost nothing,” said Balázs.

The most active olm traveled just 125 feet in 230 days while most moved 16 feet per year on averahe. The research team is confident this lack of movement is due to olms being “very energy cautious and limit their movements to the minimum.” Reproduction and food seem to be the only motivations for the olms to do anything at all, and they might still go years without either.

Ultimately, Balázs and his peers hope their research will spur others to analyze these creatures in their natural habitat more thoroughly, rather than relying so much on lab settings. 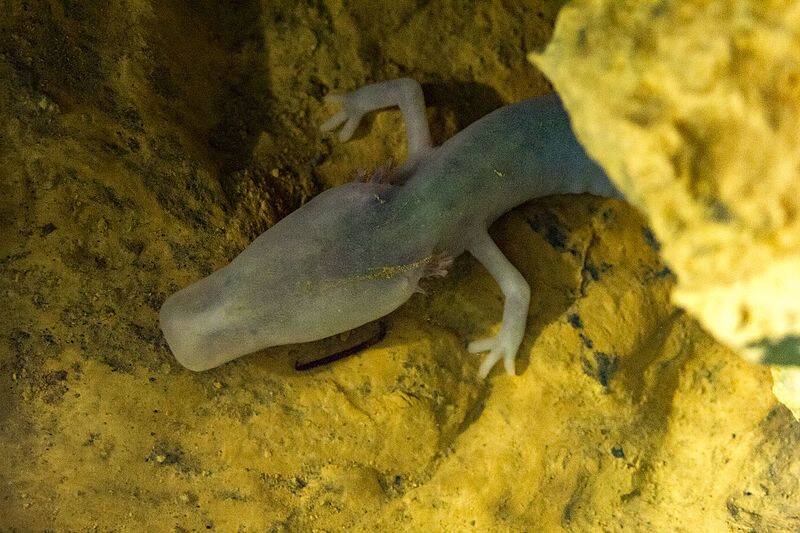 Wikimedia CommonsOlms are largely blind, but have retained the ability to perceive light. Their other senses are heightened.

“We hope that our study will stimulate researchers to study other P. anguinus populations, so we can see whether the extreme [low mobility] reported in the present paper is a general behavior throughout the species’ geographical distribution or is special to our study population.”

It shouldn’t be that hard to follow up Balázs and his team’s findings; it’s not like the olm is going anywhere at the moment.

After learning about the motionless life of the olm, read about the blue-ringed octopus — one of the world’s deadliest creatures. Then, learn about the six most amazing oceanic creatures in the world.