Not all children are innocent. In fact, some are guilty of the worst crimes it's possible to commit.

The pathology of adult serial killers eludes the comprehension of many, but the ways in which we grapple with their punishment is comparatively easier for people to grasp.

Whatever else transpires in an adult’s life, we reason, the killer had a choice and a court of law can hold that person accountable for their crimes.

But when the killer is a child, doubt arises.

To this day, nobody can say for sure how much a child’s environment affects future criminality, and this uncertainty makes dealing with children who kill exceptionally difficult. Abuse and neglect obviously play a role in shaping a killer, but some kids seem to have just been rotten from the start, and many cook up crimes so vicious that even an adult offender would have trouble committing them.

In 1968, a young girl named Mary Bell confessed to a pair of murders that would shock her native Newcastle, England even today. Just one day before her 11th birthday, Bell later confessed, she lured a four-year-old boy named Martin Brown into an abandoned house and strangled him with her own hands.

It must have taken a long time, because her hands weren’t strong enough to leave marks on the boy’s throat. Thus, the cause of death couldn’t even be established at first.

A few weeks after the killing, Bell confided in a friend, admitting what she had done. Then she and the friend, 13-year-old Norma Bell (no relation), teamed up to break into a local nursery. They didn’t take anything of value, but they did leave a note confessing to the murder.

At first, police didn’t take the note too seriously, and the girls went on to kill three-year-old Brian Howe in the woods soon after. And unlike Brown’s death, Howe’s death couldn’t be mistaken for natural causes; he had clearly been strangled, his hair was cut, his legs had been scratched up with scissors, his penis had been mutilated, and a large letter “M” was etched into his abdomen.

This had probably originally been an “N,” perhaps for “Norma,” but Mary Bell returned to the body after the killing and did most of the mutilation. 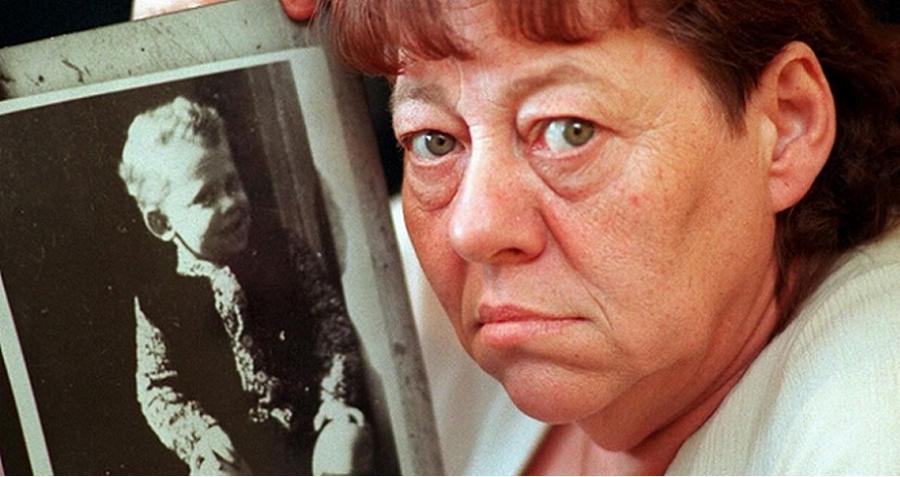 The JournalJune Richardson, Martin Brown’s mother, poses with his photograph.

According to her subsequent account, Mary Bell’s mother was a prostitute/dominatrix named Betty who worked the road from Newcastle to Glasgow. Bell’s father was probably one of her clients, though the man whose name she took was a career criminal who may have married Betty to get to Mary.

From the age of four on, Bell claims to have been forced into sex with her mother’s clients. Furthermore, when she was little, Bell suffered from a few mysterious falls, including once out of a window, and was seen by neighbors eating handfuls of sleeping pills that Betty gave her as sweets.

After Bell’s arrest, her mother sold multiple versions of her life story to several tabloids and produced several dozen pages of “Mary’s” writings for sale.

The court took this abuse, as well as Mary’s age and mental health, into consideration when deciding her fate. Ultimately, she was only convicted of manslaughter and served 12 years in custody.

Upon her release in 1980, the court granted Bell anonymity, at which point she built a private life for herself and kept out of trouble. She gave birth to her only daughter on May 25, 1984, the 16th anniversary of Martin Brown’s death.

When reporters outed Bell’s identity in 1998, she and her 14-year-old daughter — who had just learned her mother’s past from the papers — had to flee their home. In 2003, Britain adopted a so-called “Mary Bell” law, which allows courts to protect juvenile offenders’ identities for life.