From 1904 to 1908, more than 80 percent of Namibia’s Herero people and 50 percent of its Nama people were killed by German forces in a genocide carried out in concentration camps like the one on Shark Island. 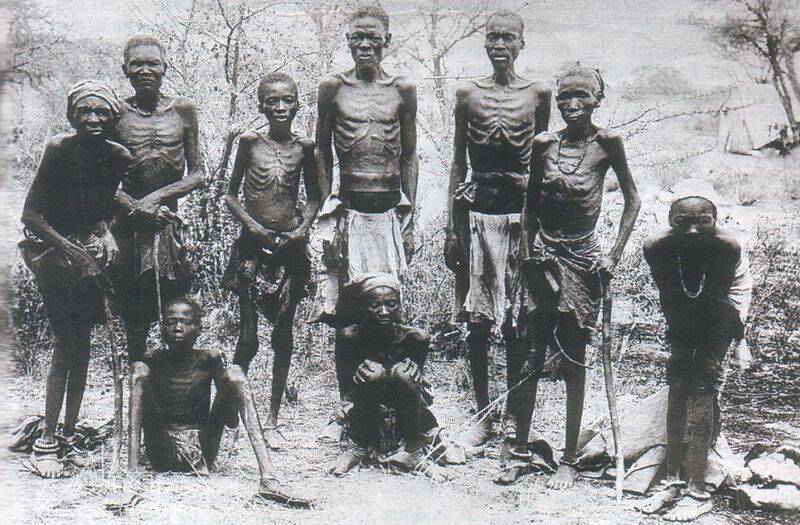 Shark Island is a lonely, desolate place, almost Martian in its barrenness and removal from the wider world. Hewn from rocks worn smooth by the Atlantic’s beating waves, the only protection from the brutal African sun afforded there is a smattering of palm trees.

This tiny outcrop off the coast of Namibia has a history even more somber than its present geography — and the only testimonial is a small marble memorial shaped like a grave marker.

Today, Shark Island has been hemmed into the mainland as a peninsula jutting out from nearby Lüderitz, in the extreme southwest of Namibia. But from 1904 to 1908, it was home to a brutal concentration camp, unofficially referred to as “Death Island.”

Shark Island was a tragic last stop for many Herero and Namaqua (also called Nama) people, punished for their opposition to German colonialism of their land. This last stop included torture, starvation, and hard labor designed to build up the harbor and lay down a railway line.

As an act of genocide in the 20th century, Shark Island was a symptom in the oncoming flu of atrocities that was European fascism. While not as notorious as Leopold II’s crimes in the Congo, Shark Island was just as brutal.

The prison camp was a particularly egregious example of a genocide in the region, the result of the Scramble for Africa and a bellwether for the Holocaust. For many, its wound still festers today. 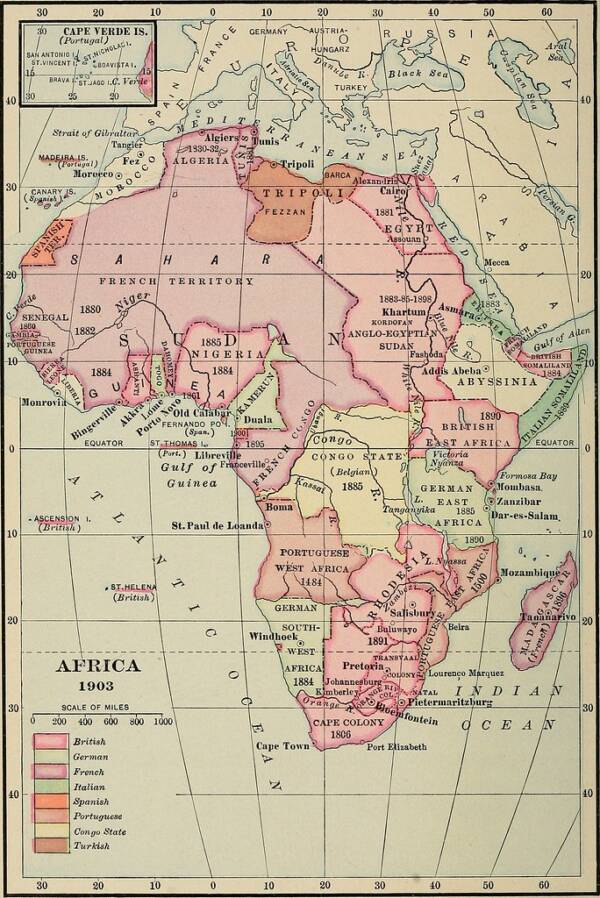 Sloan FoundationA map of the divided Africa in the early 1900s.

Between the end of the 19th century and the beginning of the 20th century, something was sweeping over Africa. European powers, eager for greater resources and power, swarmed over the continent.

France, Britain, Portugal, Italy, Belgium, and Germany tore Africa apart and reconstituted it to serve their own ends. The Scramble for Africa represented the end of self-governance for nearly one-fifth of the world’s land mass, as Europeans ruled over 90 percent of the continent by 1900.

In the 1880s, Germany claimed a southwest section of Africa, today known as Namibia, with a land mass more than twice the size of Germany. They took over the territory with brutal force, confiscating land, poisoning water wells, and stealing livestock.

Continuously subjected to systematic sexual and physical violence by colonists, a local tribe called Herero rebelled in 1904, later joined by the Nama.

The few years after this uprising saw a German response that led to the deaths of some 100,000 of these tribespeople, half of whom perished in death camps. By 1908, more than 80 percent of Namibia’s Herero population and 50 percent of its Nama population would be killed by German forces. 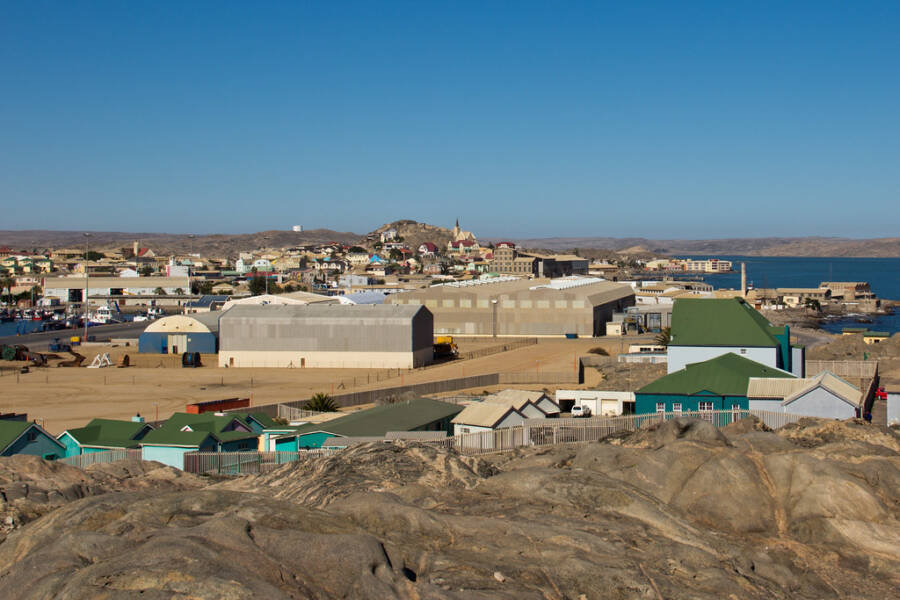 Gerald de BeerLüderitz, Namibia was built upon the shoulders of Shark Island prisoners.

Shark Island is a dot in Lüderitz Bay, in the time of colonialism called German Southwest Africa. The bay is sandwiched between the desert and the wide expanse of the Southern Atlantic.

When the rebellions began, the governor of Germany’s colony, Major Theodor Leutwein, was eager to reach a settlement with the rebels.

The General Staff in Berlin, however, saw the conflict as an opportunity – why not build up the infrastructure of this tiny stopover while simultaneously ridding themselves of the tribes rebelling against them?

The construction of concentration camps was inspired by a similar policy developed by British colonies during the South African War. The German word Konzentrationslager was a direct translation of the English term “concentration camp.”

Soon after Leutwein’s military forces were forced to retreat from Herero rebels on April 13, 1904, Leutwein was relieved of command and replaced by General Lothar von Trotha.

Assuming power, General Lothar von Trotha ordered: “The people of the Herero have to leave the country… Within German borders, every Herero, with or without a rifle, with or without cattle, will be shot.”

The Herero’s chieftain Samuel Maharero explicitly told his soldiers not to harm German women or children, though four colonist women would later die during the skirmishes. Alternatively, General Lothar von Trotha promised that if his German forces encountered Herero or Nama women and children, they were ordered to “drive them back to their people or have them shot.”

“A humane war cannot be waged against those who are not human,” Von Trotha rationalized. 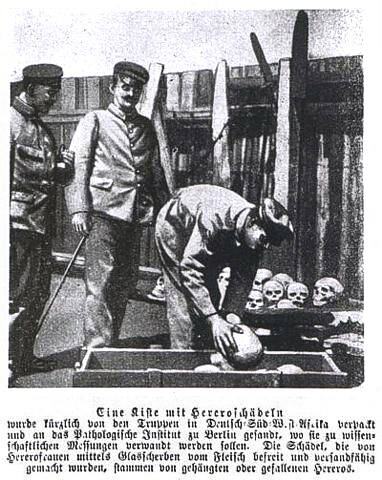 Wikimedia CommonsA sketch of German soldiers packing the skulls of the victims at Shark Island.

Hard labor was one trial the imprisoned peoples faced on Shark Island. Under the hot African sun, laborers had to deal with empty bellies, as they were fed mostly uncooked rice and flour.

The Shark Island prisoners had to hoist the fallen bodies of fellow prisoners, often relatives, and dig their graves.

Brutal mistreatment was another trial the inmates faced. When they fell, they were tortured. Sometimes this torture came in the form of leather whips. Sometimes it was random gunshots. Sometimes it was the simple indignity of toiling under harsh conditions, wearing rags and living in poorly built tents, prisoners on their own land.

Of course, the final tribulation was Shark Island’s main purpose: death. A missionary on the island recorded up to 18 per night.

Considering the exposure to vicious cruelty along with the harsh elements, it’s estimated that 80 percent of Shark Island prisoners died. 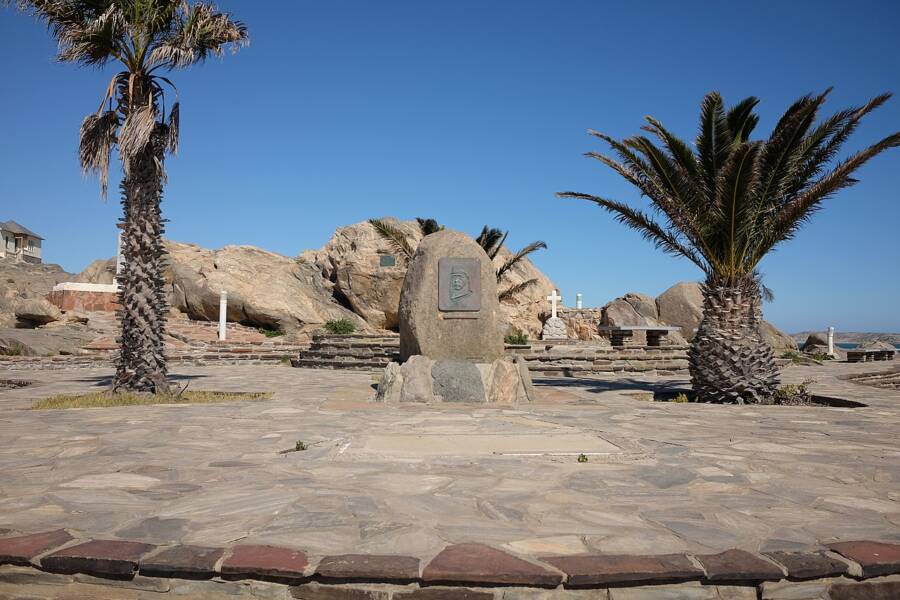 The seeds of Germany’s sins of the 1930s and 1940s were sown on Shark Island: Body parts of the Herero and Nama victims were sometimes shipped to Germany as samples meant to support claims of Aryan superiority.

Herero women were forced to use scraps of glass to scrape the skin and flesh from the heads of 3,000 dead prisoners so their skulls could be sent back for just that purpose.

German physician Eugen Fischer would also conduct experiments on the prisoners, injecting smallpox and tuberculosis into his subjects and performing forced sterilizations.

Some of Germany’s sins were sown psychologically: Namibia was colonized based on a social Darwinism theory that Europeans needed the land and resources more than the people whom it belonged to originally.

Much of the land taken during colonization is still under control of the descendants of the Germans; monuments and cemeteries honoring German occupiers still outnumber those made to honor the Herero and Nama.

In the New York Times a chief of the Nama tribe, Petrus Kooper, stated that the loss of lives, property, and land during the genocide were still felt in his community, where there are no paved roads and many people live in shacks. He said, “It is because of those wars that we live like this on this barren land.”

But there is a movement in Namibia to obtain reparations from Germany.

The Fight For Reparations

“We live in overcrowded, overgrazed and overpopulated reserves – modern-day concentration camps – while our fertile grazing areas are occupied by the descendants of the perpetrators of the genocide against our ancestors,” said Namibian activist Veraa Katuuo.

“If Germany pays reparation then the Ovaherero can buy back the land that was illegally confiscated from us through the force of arms.” And of course, Shark Island was a practical canary in the coal mine for the mid-century crimes of Europe.

“It’s important to see Germany’s history in Africa as continuous with its better-known dark chapters in the ’30s and ’40s,” noted Jürgen Zimmerer, a historian at Hamburg University.

“In Africa, Germany experimented with the criminal methods it later applied during the Third Reich, for example through… the colonization of eastern and central Europe… There is a trend among the public to view the Nazi period as an aberration of an otherwise enlightened history. But engaging with our colonial history confronts us with a more uncomfortable thesis.”

Another direct connection exists between the genocide in Namibia and Europe’s mid-century Holocaust.

In 1922, a Bavarian senior lieutenant named Franz Ritter von Epp, who had served as company commander under General Lothar von Trotha in Namibia, would hire Adolf Hitler as an informant to root out communists in the military. It was in this capacity that Hitler would meet Ritter von Epp’s deputy, Ernst Röhm.

Intended for camouflage in African terrain, the golden brown hue of the uniforms would provide a name for this Nazi paramilitary organization, the Braunhemden or Brown Shirts.

Shark Island is a testimony to the greed, bigotry, and violence resulting from the Scramble for Africa that saw its fullest realization in Nazi atrocities. This rocky piece of Namibia sharpened the knife of World War II-er horrors, and it serves as a sad reminder of the viciousness that Africa has endured for centuries.

After reading about Shark Island, learn about the Rwandan Genocide, the modern-day mass murder that the world ignored. Then, discover the forgotten horrors of the Armenian Genocide.