Sharon Kinne, The American Killer Who Mysteriously Disappeared In 1969

After allegedly murdering her husband in 1960, Sharon Kinne shot her lover’s pregnant wife. Then, she evaded justice and escaped to Mexico only to kill again — before vanishing without a trace. 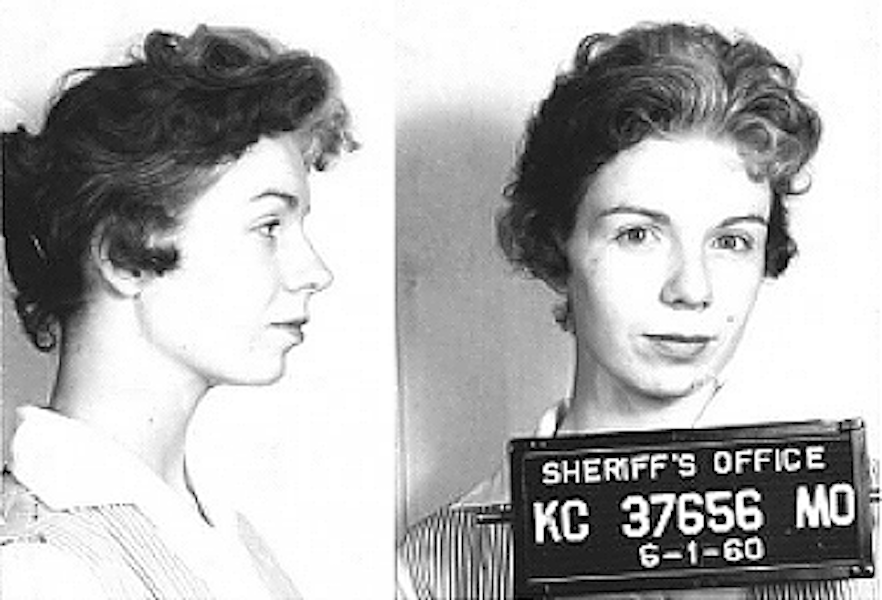 Wikimedia CommonsSharon Kinne’s 1960 mugshot, shortly after being booked for the murder of her husband and lover’s pregnant wife.

In 1960, Sharon Kinne was living as a bored housewife in the small Missouri town in which she was born. A mother to two and married to a Mormon man six years her senior, Kinne occupied her time with shopping and extramarital affairs.

Both she and her husband James were looking for a way out of the marriage when Kinne reportedly found him dead by an apparent gunshot wound to the head in March of that year. She told police that their two-year-old had shot him accidentally — but then her lover’s pregnant wife turned up dead months later.

Though she was acquitted for both murders three times, Kinne would kill again after running away to Mexico in 1964. But just five years later, Kinne managed to escape the Mexican prison where she was being held — and hasn’t been seen since.

As of this writing, Sharon Kinne is considered one of the longest-missing felons in United States history.

Born Sharon Elizabeth Hall on November 30, 1939, in Independence, Missouri, by 16, Kinne was ready to escape her small town. She thought she found an opportunity in 22-year-old James Kinne, a student from Brigham Young University.

After becoming pregnant with his child, Sharon and James Kinne married, with Sharon converting to Mormonism and giving birth to their daughter in 1957.

Bored in suburbia, a now 20-year-old Sharon burned through cash with a shopping habit. As James Kinne worked night shifts as an electrical engineer, she reacquainted herself with her high school friend, John Boldizs. 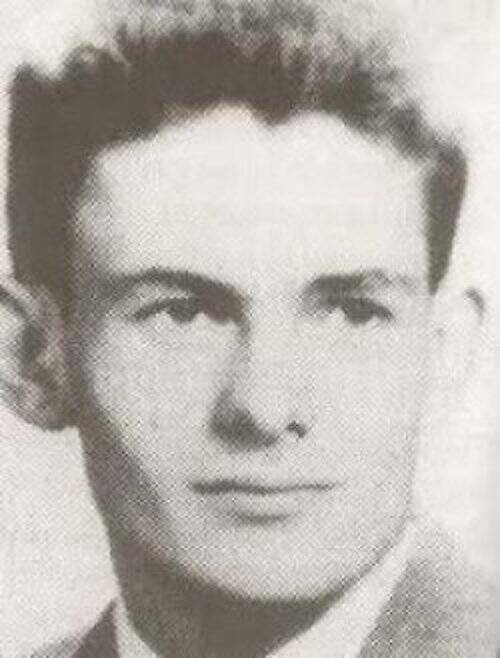 By March 1960, facing debt and suspecting his wife’s infidelities, James wanted a divorce, but his devout Mormon family urged him to “try it one more day,” according to The La Crosse Tribune. Sharon Kinne was also contemplating separation – but of a vastly different kind.

On March 19, 1960, Kinne called the police after reportedly finding her husband dead. She claimed that she was in the bathroom around 5:30 p.m. when she heard a gunshot from the couple’s bedroom. James Kinne was napping, so she was shocked to find him shot in the back of the head with a .22 caliber pistol held by their two-and-a-half-year-old daughter.

Kinne told officers that her husband often let their daughter play with his guns, a fact confirmed by friends and family. No gunshot residue tests were completed on Kinne or her daughter, and investigators ultimately decided that Kinne’s story could have been true.

And that could have been the end of the story if not for the death of her lover’s pregnant wife.

Using some of her new money, Kinne bought a Ford Thunderbird from a married car salesman named Walter Jones on April 18, 1960. They started a brief affair that Jones ended when Kinne announced that she was pregnant. Then, Jones’ pregnant wife Patricia went missing on May 26.

After filing a missing person’s report, Jones eventually learned that the previous afternoon, Patricia had been dropped off to meet with an unknown woman. The woman was seen waiting in a car wearing a head scarf and large sunglasses. Jones angrily confronted Kinne, who admitted to calling and meeting Patricia. 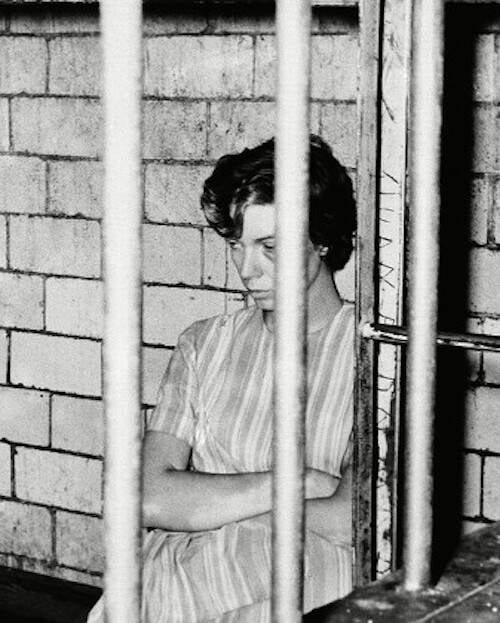 Anonymous/AP/ShutterstockSharon Kinne being held in connection with a 1964 shooting of a Chicago man in Mexico City motel. Her left eye is blackened, although no explanation was given.

Kinne and her ex-lover John Boldiz led police to Patricia Jones’ body, off the path of their usual lover’s lane, according to St. Joseph News-Press. Jones had been killed by four shots to her head, stomach, and shoulders by a .22 caliber pistol, her time of death estimated to be early the previous evening.

The police, having found only one .22 bullet at the scene, had three most likely suspects: Kinne, Jones, and Boldizs. Jones and Boldizs gave written statements that they had “dated” Kinne and passed polygraph tests.

Investigators knew Sharon Kinne was the last person to see Patricia Jones alive, and so on May 31, Kinne was arrested for her murder. At that time, police also charged her with the murder of her husband.

But Kinne’s separate trials were postponed as she gave birth to another daughter on Jan. 16, 1961. The Patricia Jones trial began with the absence of a murder weapon, though a man who worked with Kinne admitted to purchasing a .22 caliber pistol for her in early May 1960. But when police searched her house, they only found an empty gun box.

In June 1961, citing “just too many loopholes,” the all-male jury acquitted Kinne. Afterward, a jury member requested Kinne’s autograph, which she duly signed, captured by a Kansas City Star photographer. 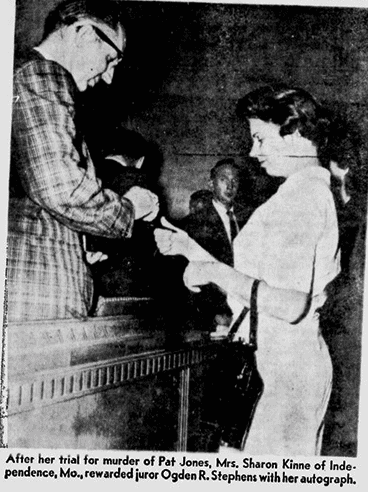 Kansas City StarSharon Kinne signing an autograph for a juror following her trial for the murder of Patricia Jones.

For the murder of her husband, Kinne was found guilty at trial and sentenced to life on Jan. 11, 1962. According to court documents, prosecution witness John Boldizs testified that weeks before the murder, Kinne asked him, “Would you kill my husband for $1,000?” Which Boldizs thought was “in a joking way.”

In March 1963, a Supreme court reversed Kinne’s conviction ordering a new trial, which ended in a mistrial, and her third trial resulted in a hung jury. Out on $25,000 bond, Kinne headed to Mexico City in September 1964, entering as “Jeanette Pugliese.”

While Kinne could legally travel, she did not have written permission from the bail bond company to leave the U.S., making her a wanted felon.

On Sept. 18, 1964, Sharon Kinne entered the bar of Del Prado Hotel, meeting Mexican-born American citizen, Fransisco Parades Ordoñez, and ended up in his motel room, ostensibly to look at some pictures.

Kinne spurned Ordoñez’s advances, and shot him twice in the chest “just to scare him off.” A motel employee, hearing gunshots, was shot and injured by Kinne as he entered the room. Kinne was locked inside and then arrested, claiming self-defense.

The Mexican police thought otherwise, and that it was instead a robbery gone wrong.

During questioning, Kinne allegedly told a U.S. embassy official that she had shot men before and gotten away with it. A search of Kinne’s hotel room revealed the .22 caliber pistol that likely killed Patricia Jones. 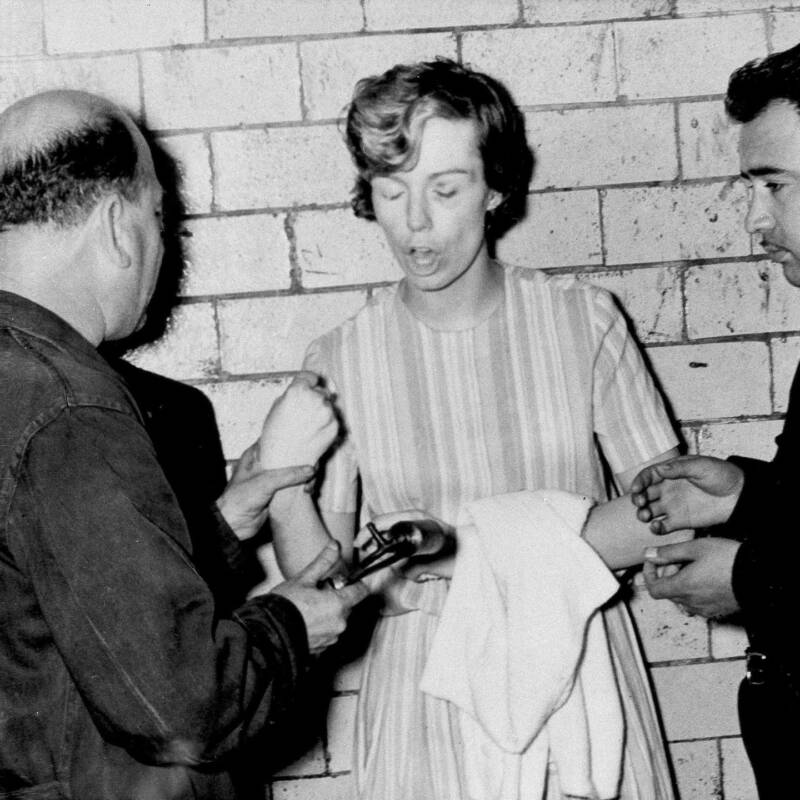 Although ballistics testing matched that of her 1961 trial, Sharon Kinne could not be charged for Jones’ murder having already been acquitted. With Kinne in Mexican custody, she missed her fourth retrial for the murder of her husband, resulting in an arrest warrant.

Convicted of Ordoñez murder on Oct. 18, 1965, Kinne was nicknamed “La Pistolera,” the gunfighter, by the Mexican press. Sentenced to 13 years in Iztapalapa women’s prison, it seemed this would be the end of Kinne’s story.

But then on Dec. 7, 1969, Kinne missed a routine evening roll call. When she missed the night’s second roll call, her absence was officially noted. An unusual blackout had occurred at the prison around that time, and officials took several hours reporting Kinne missing to the police.

A wide-scale search for Sharon Kinne was conducted, but she was never located or heard from again.

After learning about Sharon Kinne, read the shocking story of Nannie Doss, the giggling granny. Then, learn about truck-driving murderer Olga Hepnarova.