Inside California’s Slab City, Where People Go To Live Way Off The Grid

The makeshift town of Slab City in the brutal Colorado Desert might not be glamorous, but over 1,000 nomads call it home during the winter.

Built on an abandoned military base 200 miles east of Los Angeles in the middle of California’s Sonoran Desert, Slab City doesn’t have many modern amenities. No power lines nor pipes carry electricity or fresh water to the city. Residents have to sort out their own system for disposing of sewage or trash.

But to those who call the community home, Slab City offers something even more important than comfort: freedom. 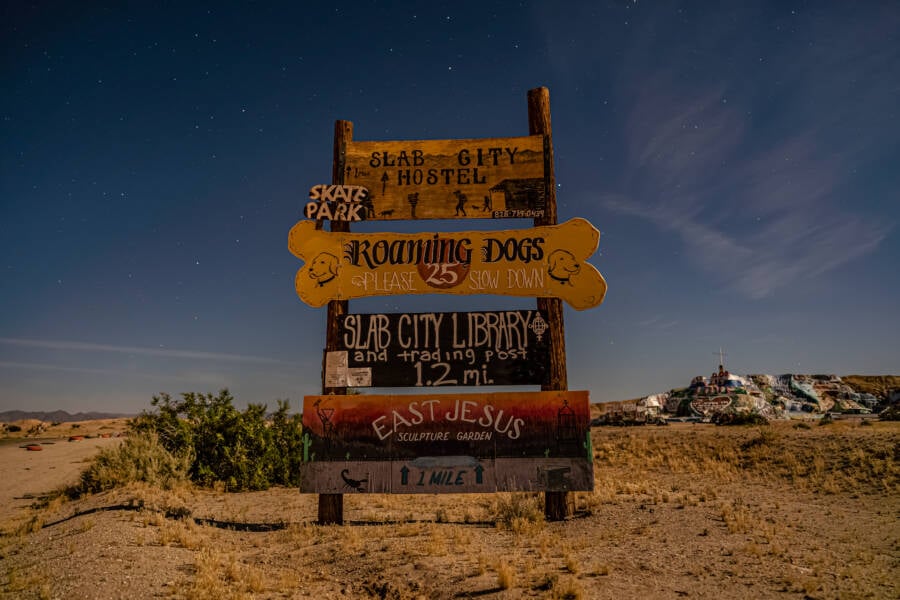 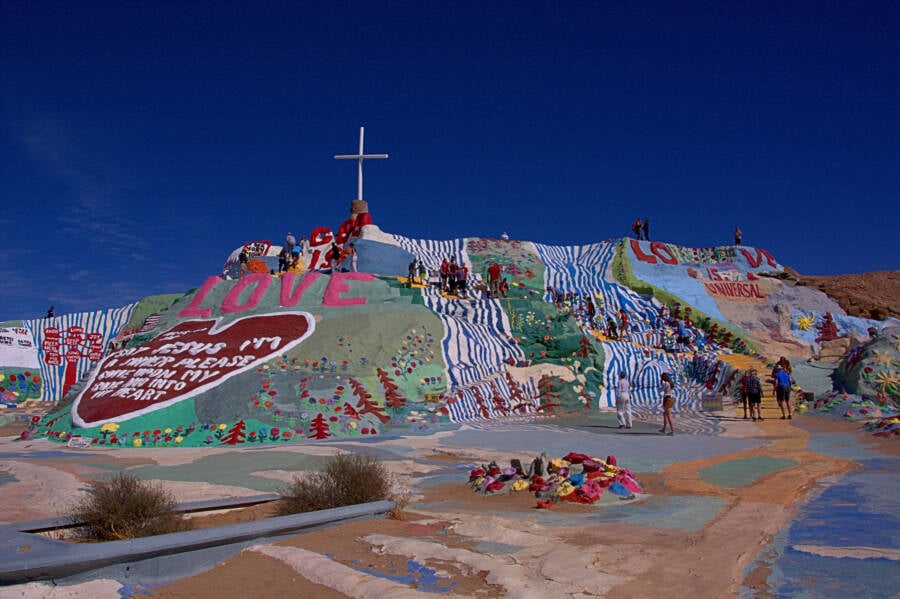 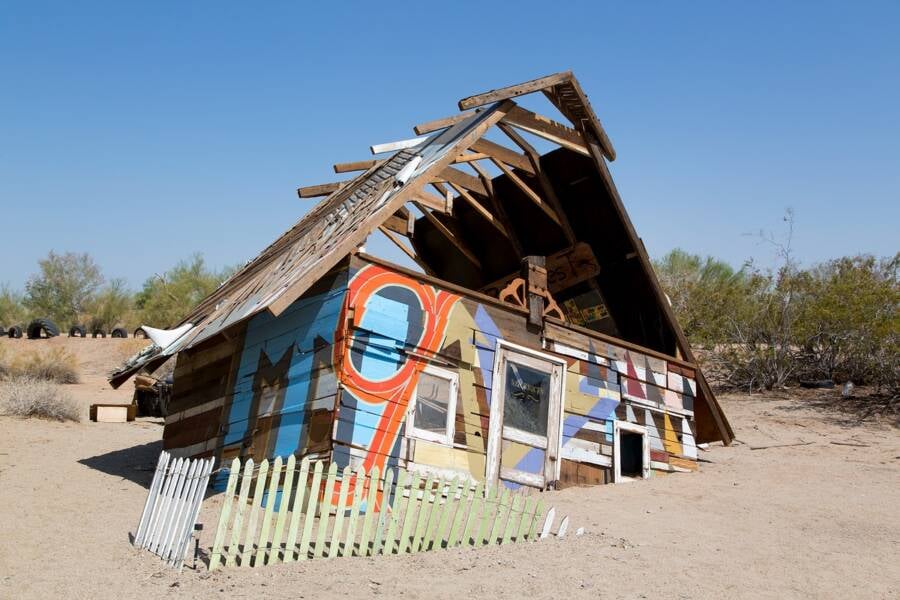 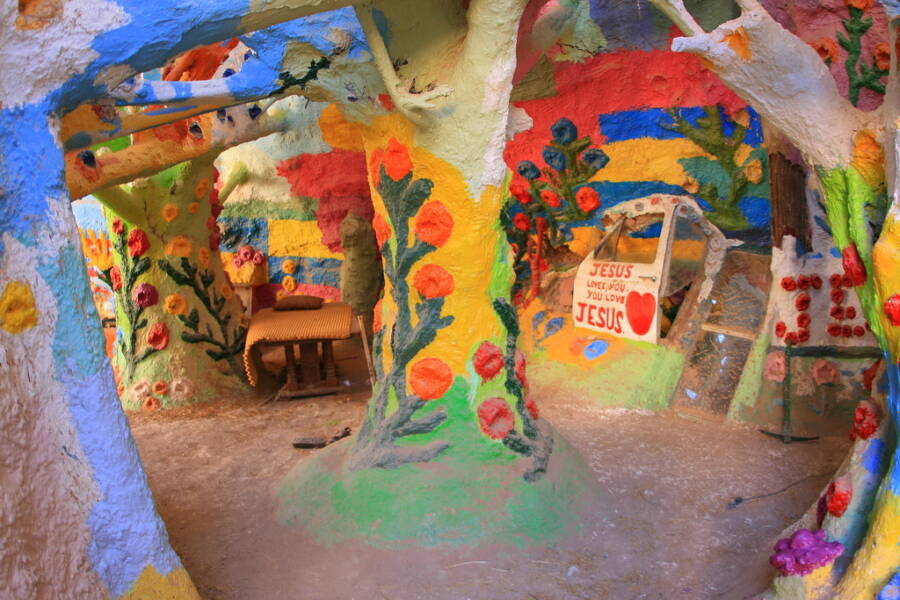 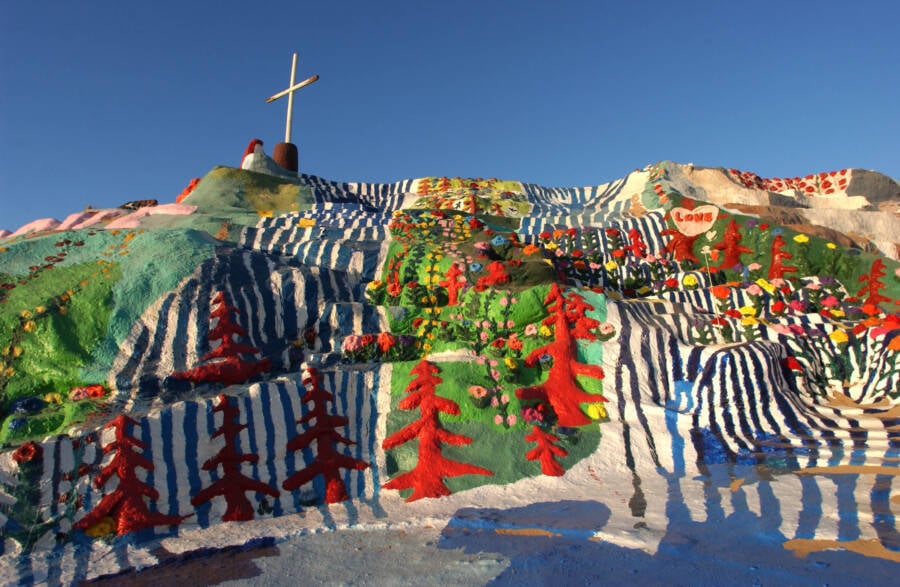 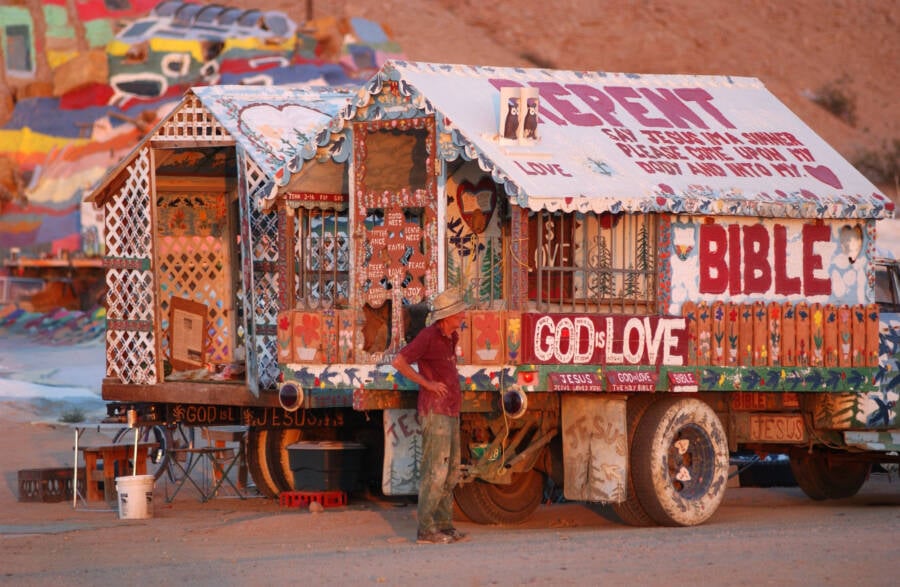 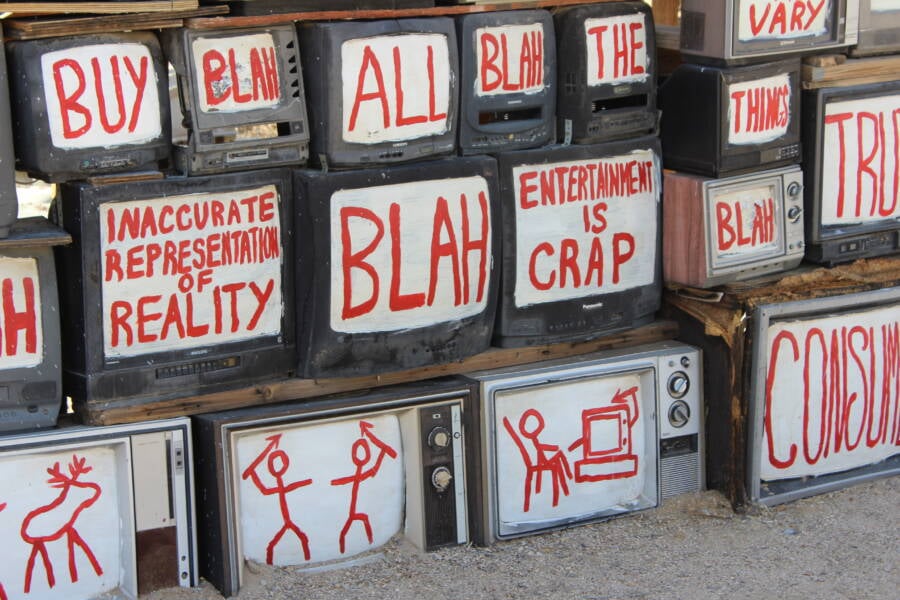 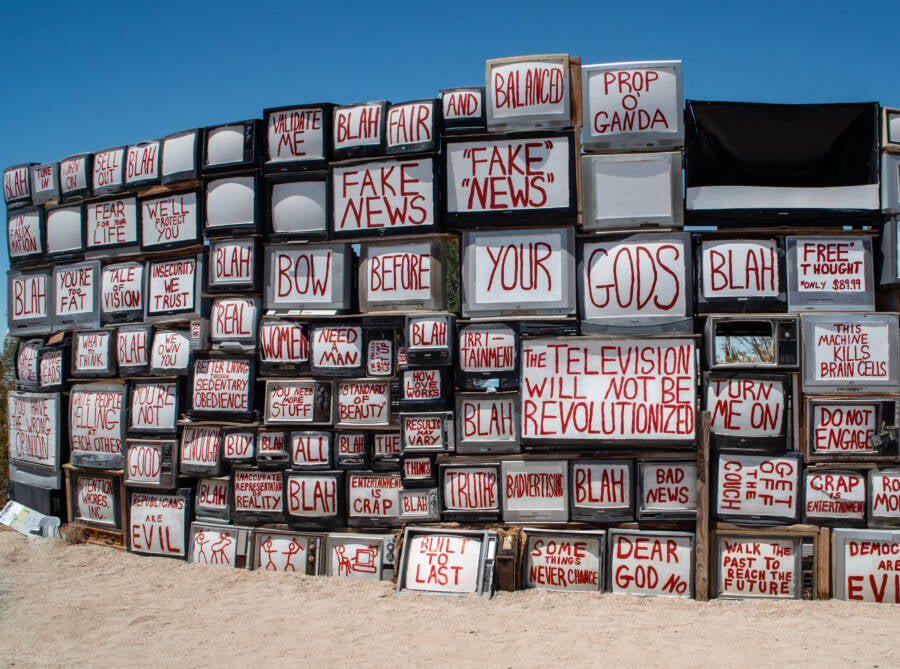 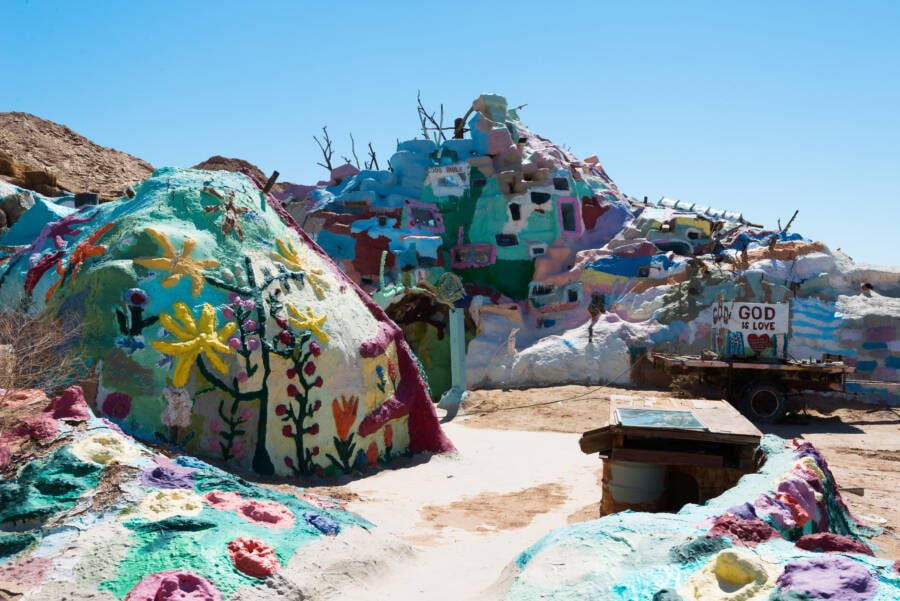 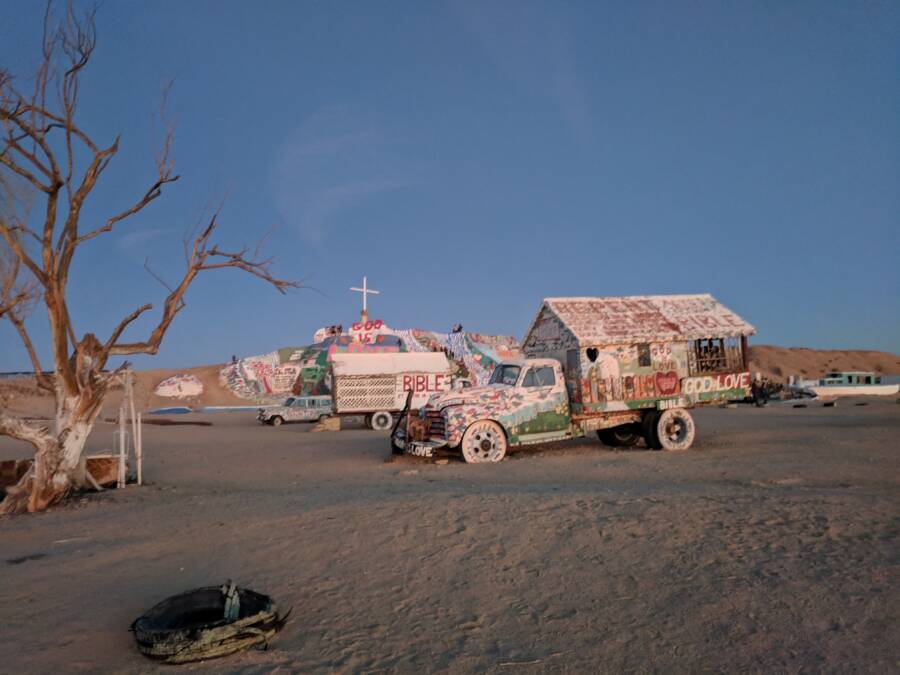 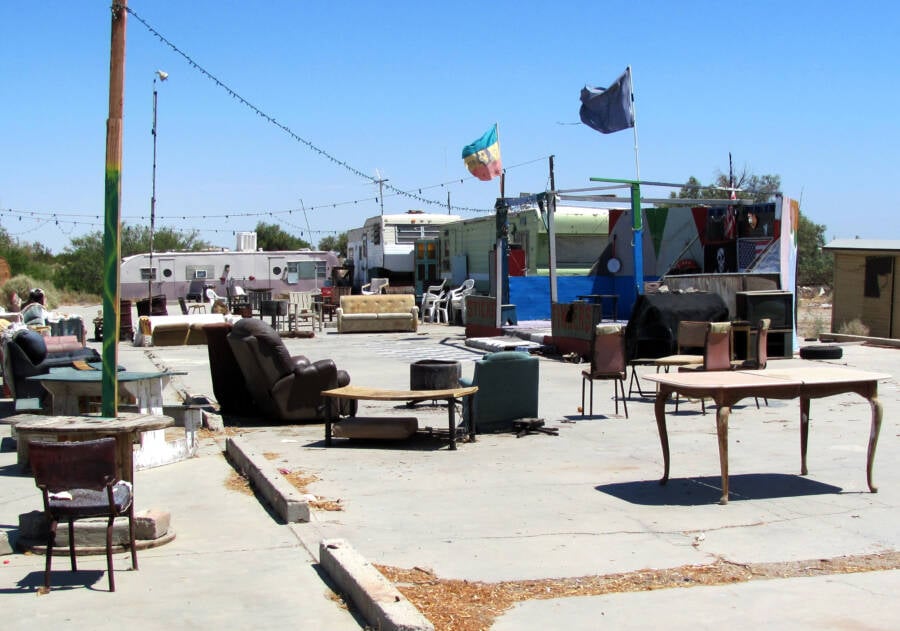 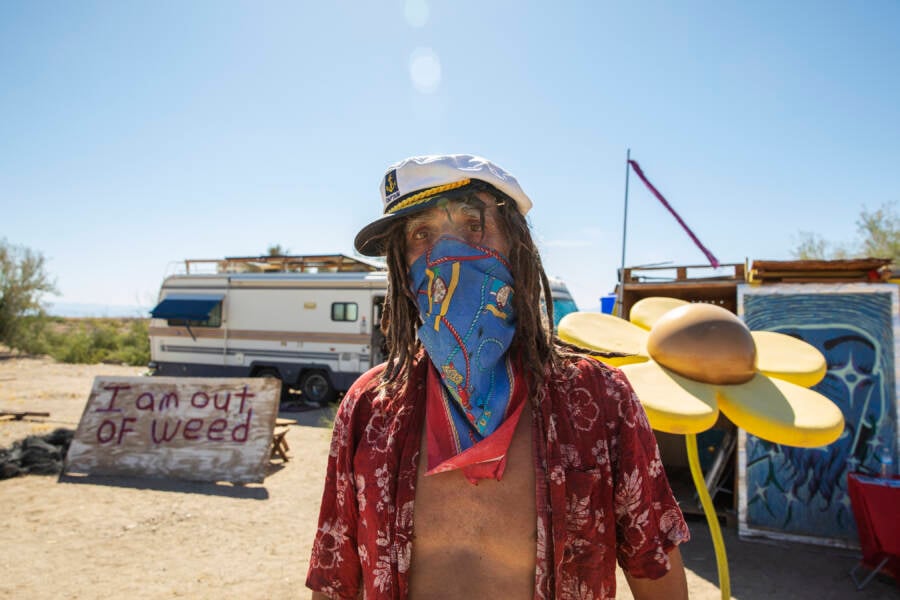 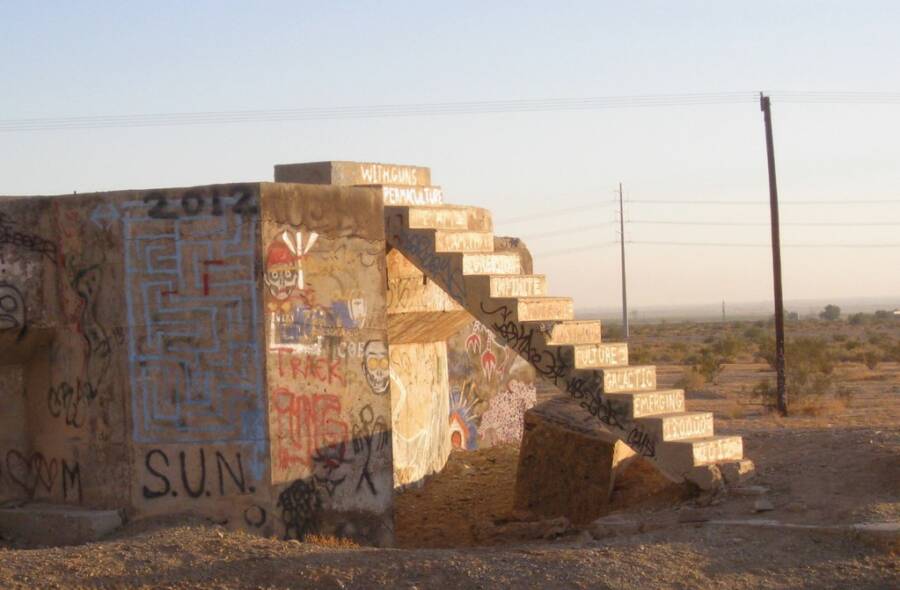 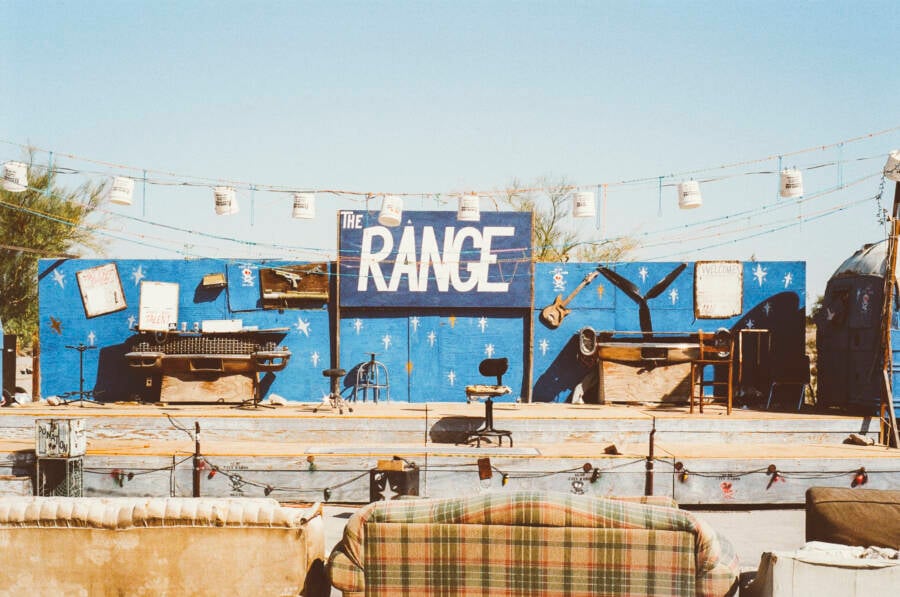 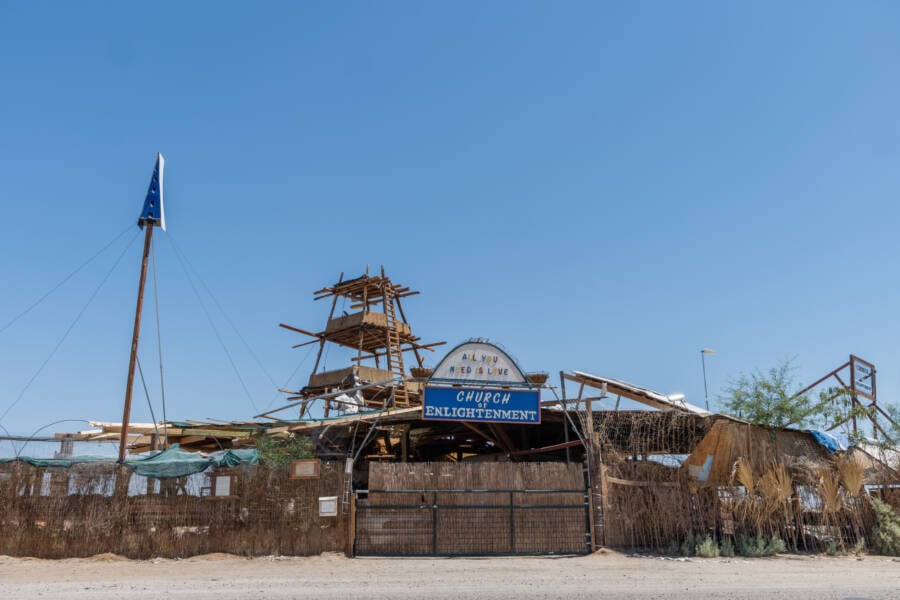 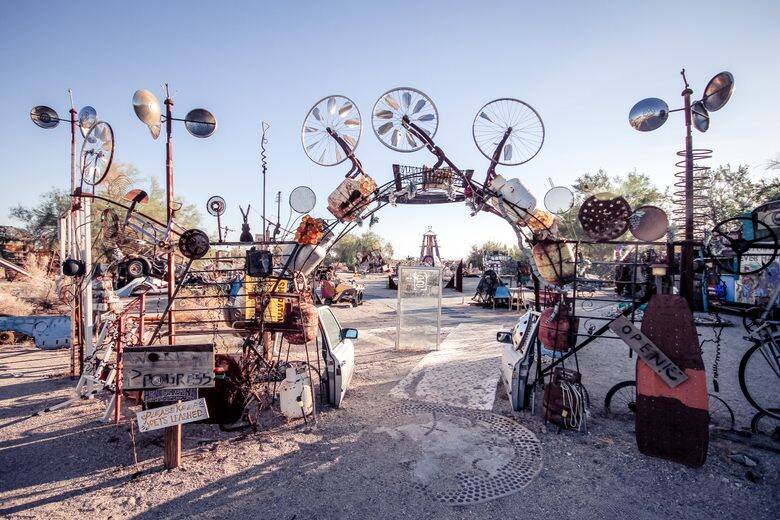 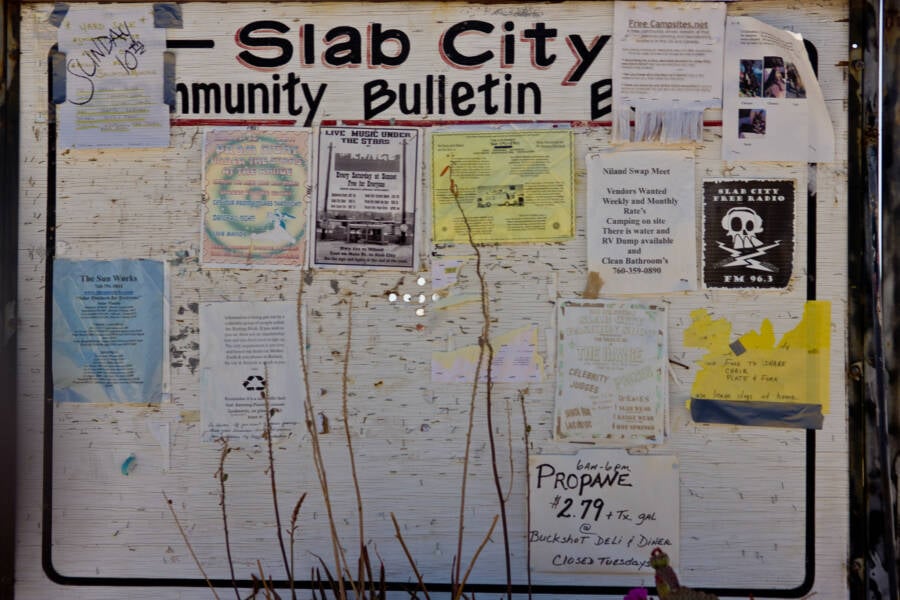 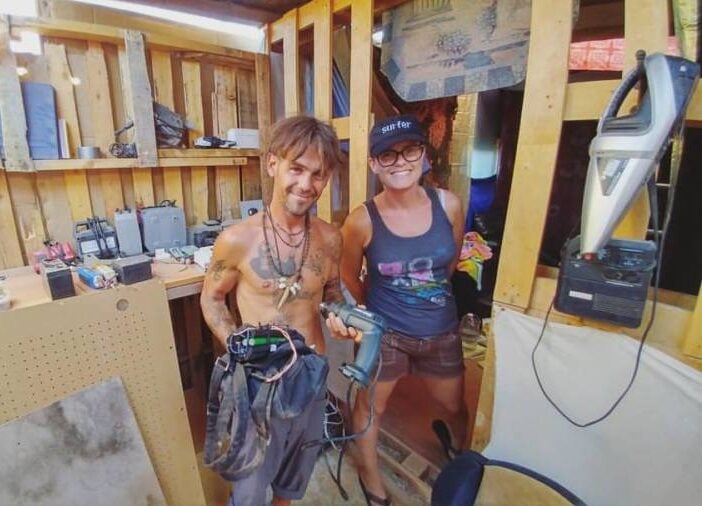 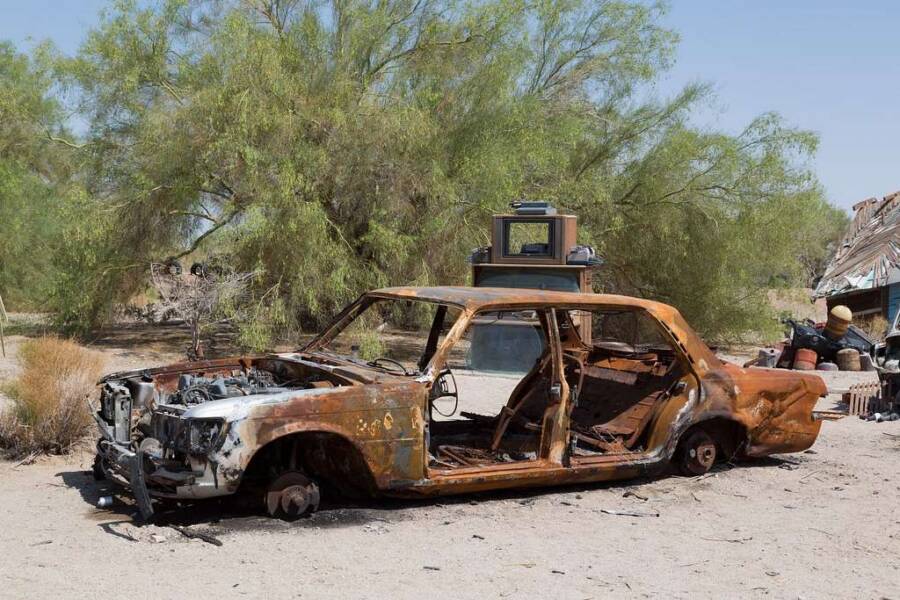 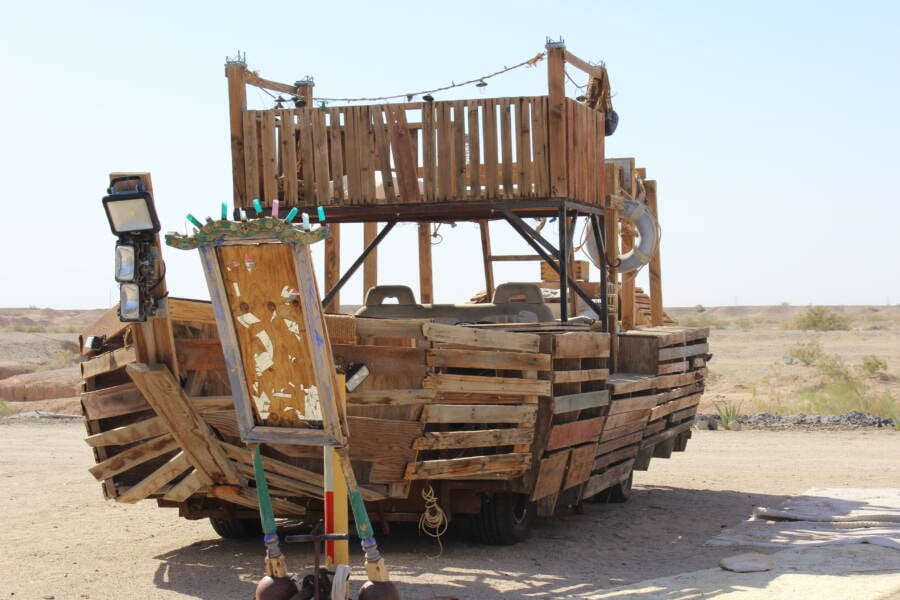 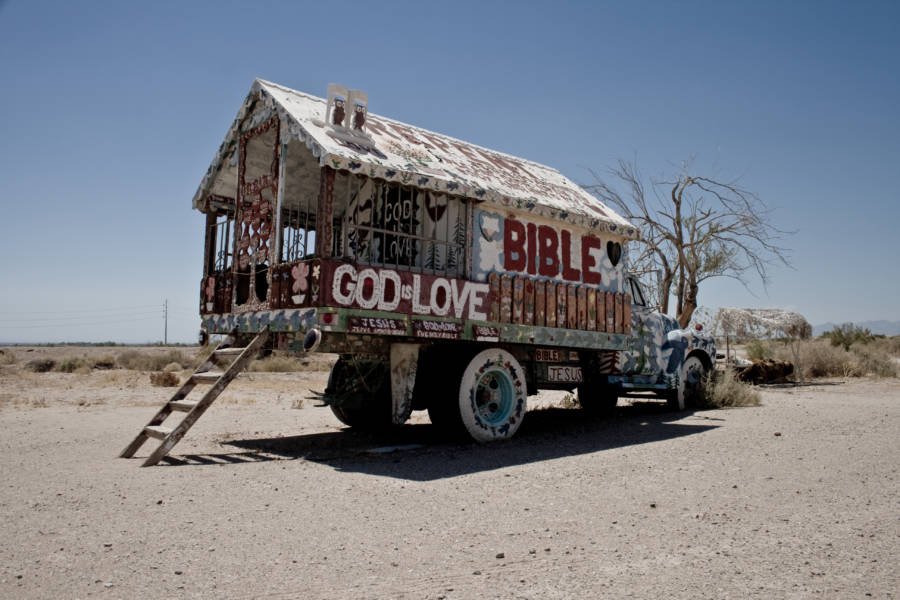 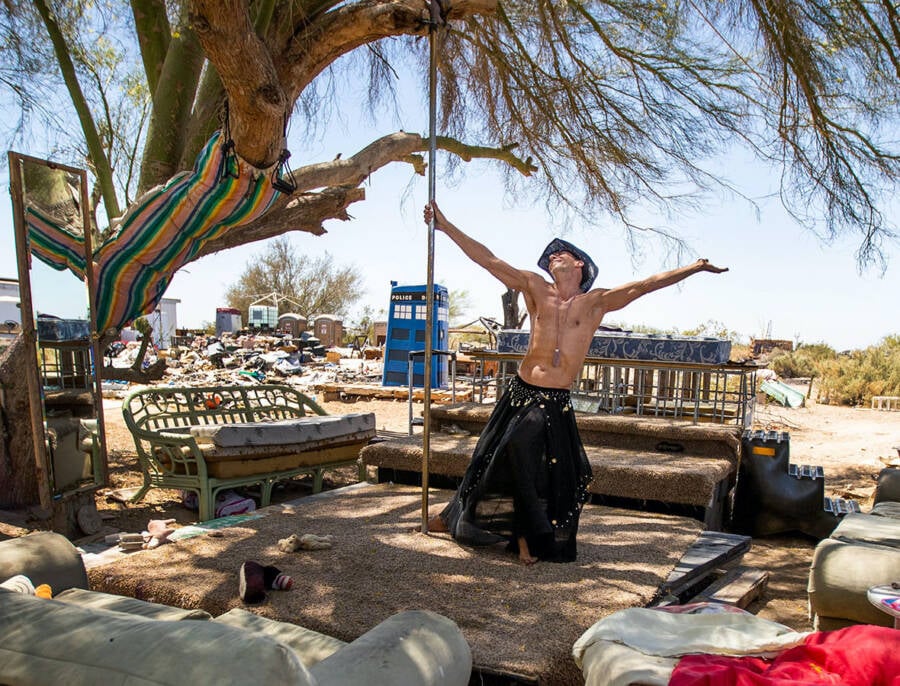 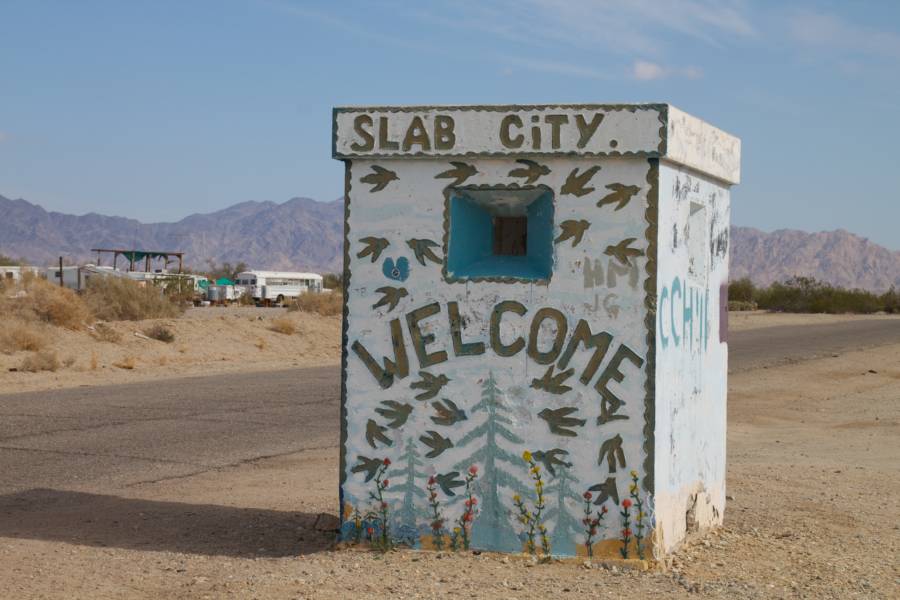 1 of 24
Situated 200 miles east of Los Angeles in the Sonoran Desert, Slab City has no power nor water, and residents are required to fend for themselves.Flickr
2 of 24
The state once tried to declare Salvation Mountain a hazardous waste site but Leonard Knight prevented it. The Folk Art Society of America has declared it a national folk art shrine.Flickr
3 of 24
East Jesus Art. Rawpixel
4 of 24
A peak inside Salvation Mountain. Slab City is named for the concrete slabs left over from the military base that stood there leading up to World War II until 1956 when it was decommissioned.Flickr
5 of 24
Salvation Mountain covered with Biblical messages and symbols. Leonard Knight has been painting and repainting this spiritual hill for decades, using an estimated 100,000 gallons of donated paint.Getty Images
6 of 24
Leonard Knight stands next to his trucks, one to live in (L) and one for driving (R). 2002.David McNew/Getty Images
7 of 24
Political folk art at Slab City.Flickr
8 of 24
Flickr
9 of 24
Getty Images
10 of 24
Wikimedia Commons
11 of 24
Flickr
12 of 24
A Slab City resident.Scott Pasfield for the Washington Post/Getty Images
13 of 24
Steps that once led to a water or sewage tank before the base was decommissioned. Flickr
14 of 24
The community center, known as The Range, occasionally screens movie and TV.Wikimedia Commons
15 of 24
The so-called Church of Enlightenment in Slab City. 2002.Getty Images
16 of 24
The entrance to East Jesus in Slab City.Atlas Obscura
17 of 24
The community bulletin for the 150 or so permanent residents of Slab City.Flickr
18 of 24
Some residents of Slab City at a recycling center where they turn laptop batteries into solar power storage.dan lundmark/ Flickr
19 of 24
A dilapidated car in East Jesus, Slab City.Picryl
20 of 24
Flickr
21 of 24
Another view of Knight's self-painted truck.Randy Heinitz/ Flickr
22 of 24
Shutterstock
23 of 24
A sign welcoming visitors to Slab City.tuchodi/ Flickr
24 of 24 Inside California’s Slab City, Where People Go To Live Way Off The Grid
View Gallery

The Founding Of Slab City

Slab City, also called The Slabs, was born when the U.S. Marine Corps abandoned Fort Dunlap, a military installation near the town of Niland. They dismantled the buildings in 1956 but left behind the concrete slabs that served as their foundations. Though California officially regained control over the land, it was too remote and inhospitable for the state to really concern itself with.

But when employees from a chemical company working near Niland found the slabs, they decided it was the perfect spot to erect a temporary settlement close to their job site. The small trailers they brought with them became the beginnings of the new community of Slab City.

Over the next few decades, people from outside the area were drawn to the improvised city, too. To this day, the residents remain a motley collection of those with little income, snowbirds, and people looking for a way to live off the grid.

In this forgotten place, there are no property taxes nor utility bills, which makes it ideal for people trying to stretch their pensions or Social Security checks. Even today, Slab City's population swells to over 4,000 during the cooler winter months as people come down from as far away as Canada to take advantage of the warmer temperatures and cheap living.

When the summer heat sets in and temperatures rise to 120 degrees, most return to their homes, leaving a smaller permanent population of about 150.

Becoming a resident of Slab City is an informal process. You simply show up, find a patch of land that no one else has claimed, and set up a trailer, shack, yurt, or truck.

But living in the community requires a certain degree of self-reliance.

The nearest public amenities – including drinkable water – are in Niland, a few miles away. Residents share a single communal shower fed by a nearby hot spring. Most people in the community rely on their own technical expertise to handle the rest.

If you want electricity, you have to set up a collection of solar panels, generators, and batteries. Or you can hire "Solar Mike," a long-time Slabber who has been selling and installing solar panels out of his trailer since the 1980s.

Though police from Niland occasionally patrol the area and will respond to emergency calls, the community largely polices itself. 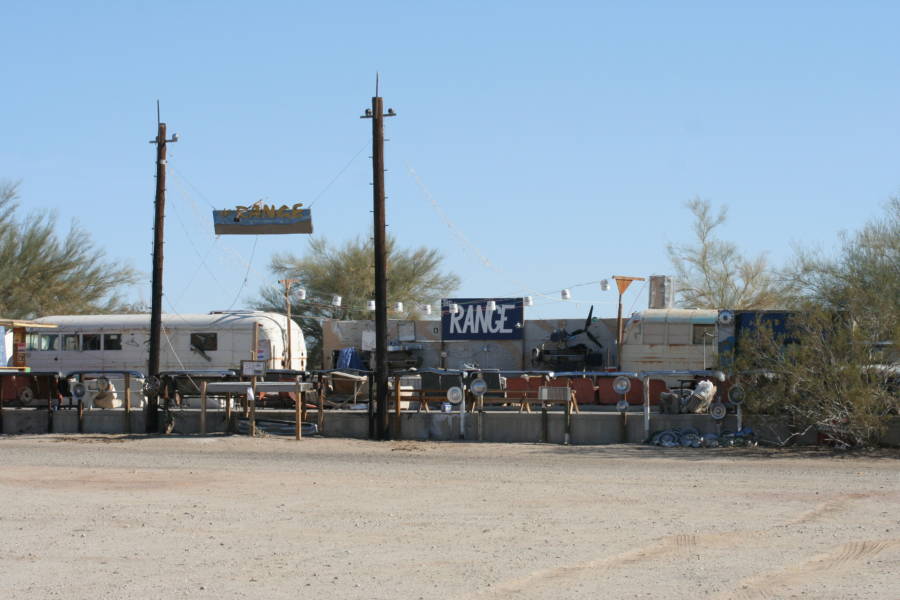 Alessandro Valli/ FlickrThe Range, or community center, at Slab City. It hosts a prom every year.

On that note, living in Slab City requires adhering to a certain code of behavior. While drug use is common, residents say that it's usually confined to certain, well-known areas of the camp. The most common type of crime is theft. Typically, there aren't reports of vigilante violence in response to crime, but the community will shun people who are suspected of misbehavior.

As one Slabber, George Sisson, who runs an Airbnb in the community, explains, "Here you don't mess with people's business unless they steal your shit."

Altogether, Slab City is as close to a self-governing commune as you're likely to find in the U.S. The most common problem people in the community report is simple boredom, which makes sense given that they're living in the middle of the desert.

Some find solace in the simple life. Others have banded together to provide some escape from the monotony. Indeed, Slab City has its own community and event center named The Range, which hosts a yearly prom.

There's also an internet cafe that basically amounts to a tent with a wireless router inside. But residents can use the connection to download entertainment. The community used to come together to watch the latest episode of Game of Thrones on the night it premiered.

Art is also an important part of life in Slab City. One of the most popular attractions is Salvation Mountain, a collection of rocks covered in hundreds of thousands of gallons of latex paint and decorated with a large cross and religious messages. It's the life's work of one of The Slab's most famous residents, Leonard Knight.

Knight came to Slab City from Vermont, where he had lived off a variety of odd jobs that involved welding and painting. Knight arrived in the community in the 1980s with a hot air balloon in tow. Originally, his plan was to use the community as a base for a transcontinental balloon trip. But after the balloon refused to float, he decided to put down roots instead.

Over the next few decades, he built Salvation Mountain as a monument to his faith. For Knight, Slab City was the perfect place to practice the philosophy he lived by: "Love Jesus and keep it simple." Knight died in 2014, but he has remained a revered figure in the community. 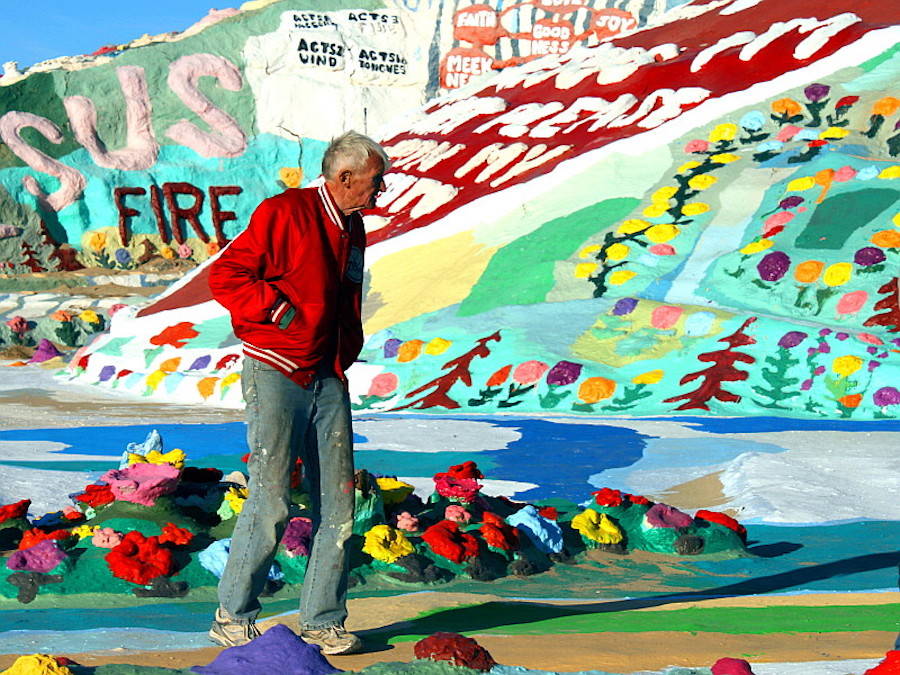 Another important site is East Jesus, which functions as an art collective where residents display their own sculptures and art installations. Most of them are made from recycled materials, demonstrating the residents' ideal of self-sustainability. This kind of unique art from people on the fringes of society is part of the community's unique appeal.

Legal Challenges To The Slabs

But for a society that has long existed on the outer edges of the law, the future looks far from certain. In 2015, the state of California considered dividing the land the community sits on and selling it to private companies. Though nothing came of the proposal, it signaled how fragile the community's position was.

That has led many residents to worry that Slab City's days are numbered. And with it, they see the possible end of "the last free place in America."

If you'd like to visit Slab City, there are a number of residents who offer lodging for rent at relatively low prices.

After learning about Slab City, check out these seven creepy ghost towns from around the world. Then, learn about California City – the biggest abandoned town in the Golden State.