A new report claims that migrant workers are subjected to "appalling conditions" in constructing a 2018 World Cup stadium. 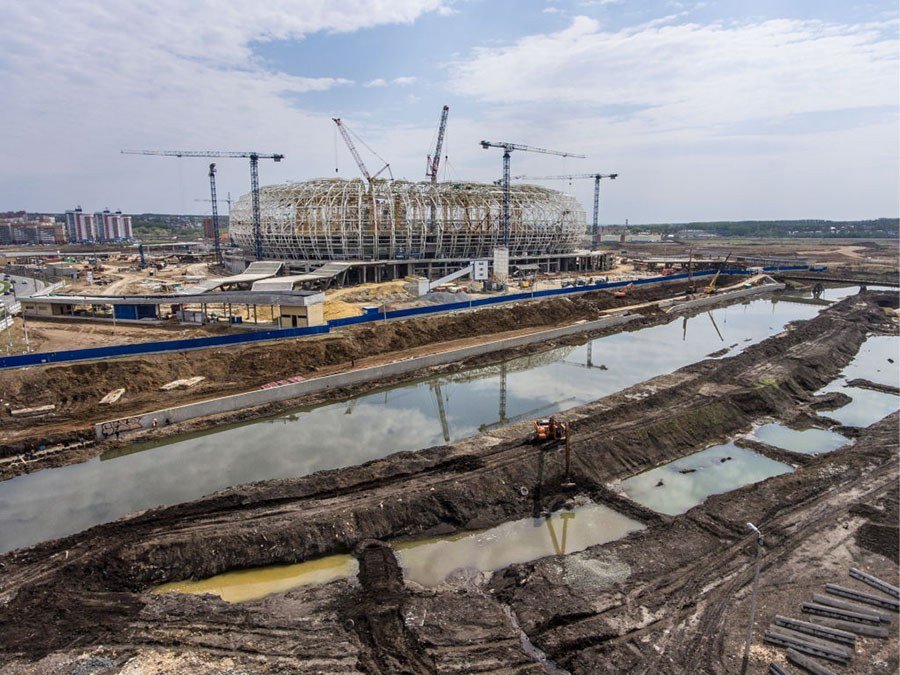 The world’s most popular sport is once again being linked to slave labor.

A recent report released by Norwegian soccer magazine Josimar alleges that migrant workers in Russia have been subjected to slave-like conditions while preparing for the 2018 World Cup.

According to sources interviewed, migrant workers in St. Petersburg — the site of the Cup — have been offered to stadium subcontractors for “around the clock” services, for which they would receive just over $10 a day. Many, however, are reported to receive far less than that, and are alleged to live in storage containers outside the Zenit Arena, the World Cup stadium which is still under construction. According to the report, the workers are also under constant surveillance.

“They are like robots,” a source told Josimar. “All they do is work, work, work. They work from seven in the morning until midnight. Every single day. They are never off. They are very good workers, but they look unhappy. They have no life.”

Many of these workers are from North Korea. And like many migrant workers, these workers are poor, indebted, and have entered into contracts which require them to remain at a given site for a specified amount of time — no matter the conditions, which experts say are often bad.

“They work and live under terrible conditions,” human rights lawyer Olga Tseitlina told Josemar. “Their passports are confiscated, which practically makes them into slaves. They know, if they complain, there will be consequences, for themselves and their families back home. That is the biggest difference between them and other migrant workers. An Uzbek worker knows, if he complains, there’ll be no consequences for his family at home.”

For North Korean workers, the stakes are particularly dire. As described in the Guardian, these workers are in essence forced to work abroad as a way for the isolated, cash-strapped country to gain critical revenue.

According to a United Nations report, North Korean migrant workers — which experts interviewed by Josimar say total in at least 100,000 people — provide the country up to $2 billion in revenue, which some believe helps finance its nuclear weapons program.

As Tseitlina described of one of her clients, whom she calls Kim to protect his identity, “He was ordered by the North Korean regime to work in the timber industry in a small village in the eastern part of Russia. He was told it was his duty to help his beloved homeland, that it would benefit his family.”

“This happened shortly after he had served ten years in the armed forces, the minimum time for national service in North Korea. In the military, he and many others were regularly beaten by superior officers. No one dared complain – even harsher methods of punishment awaited those who did. Kim describes his experiences in eastern Russia as being close to what he went through in the military.”

This week, FIFA officials have admitted that there is something to the magazine’s claims. In a Monday-dated letter to four presidents of Nordic football associations, the Guardian reports that FIFA president Gianni Infantino admitted that human rights violations have taken place during the construction of the St. Petersburg arena, and that many of the migrant workers have been exposed to “often appalling” working conditions.

He added that FIFA had investigated reports of these conditions — and the presence of North Korean workers on the site — and that by March of 2017, investigators did not find any more North Koreans working on the arena premises.

Of course, this is not the first time the World Cup has been linked to modern-day slavery. In 2013, the Guardian published an exclusive report on working conditions in Qatar, which is slated to host the 2022 World Cup. In the report, it wrote that at least 4,000 migrant workers will die during construction projects, many of them due to heart attacks, and that these migrant workers had been subjected to forced labor, stripped of their passports, and denied access to water amid the desert heat.

Next, read on to learn why FIFA encountered problems when it held its most recent World Cup in Brazil.