25 Soviet Propaganda Posters From The Height Of The Cold War

"If you do a pointless chat, you are helping spying rat" Koretsky, 1954 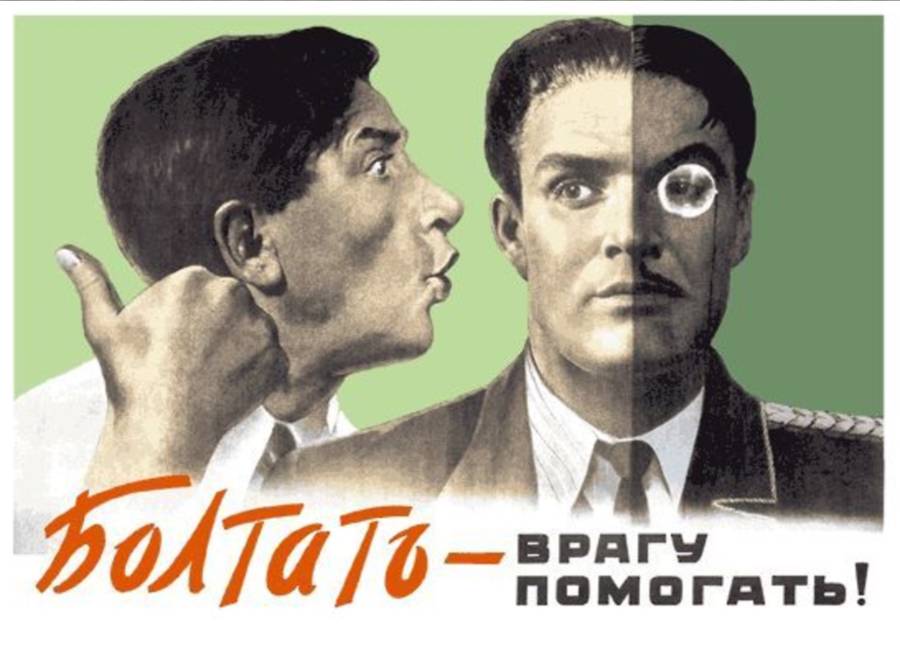 This highlights the paranoia about double agents and spies that overtook the general populous and the governments (in both the USSR and the USA) during the Cold War. 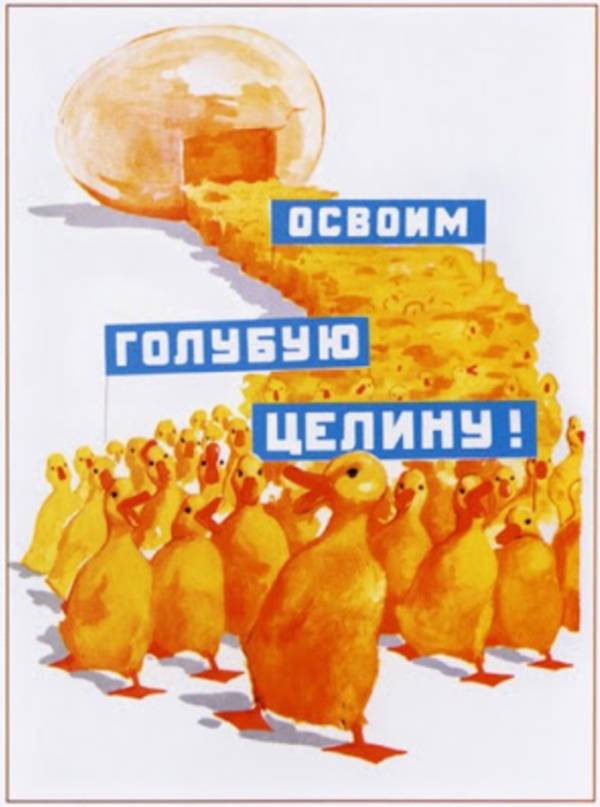 This was part of an effort to change farming tactics to better feed the Soviet people. The strategies included using experimental science to cultivate better soil and, as seen here, breeding more ducks to get cheap meat. 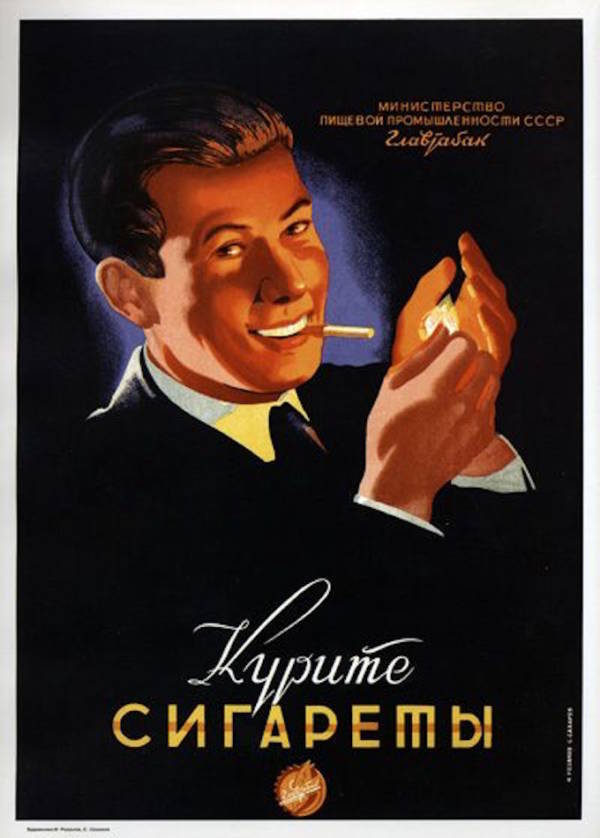 The most notable thing about this poster is that it encourages people to smoke cigarettes, but isn't promoting a particular brand.

This is because all of the factories were being controlled by the Communist Party, so it didn't matter where people were buying their goods, they just needed to buy more of them. 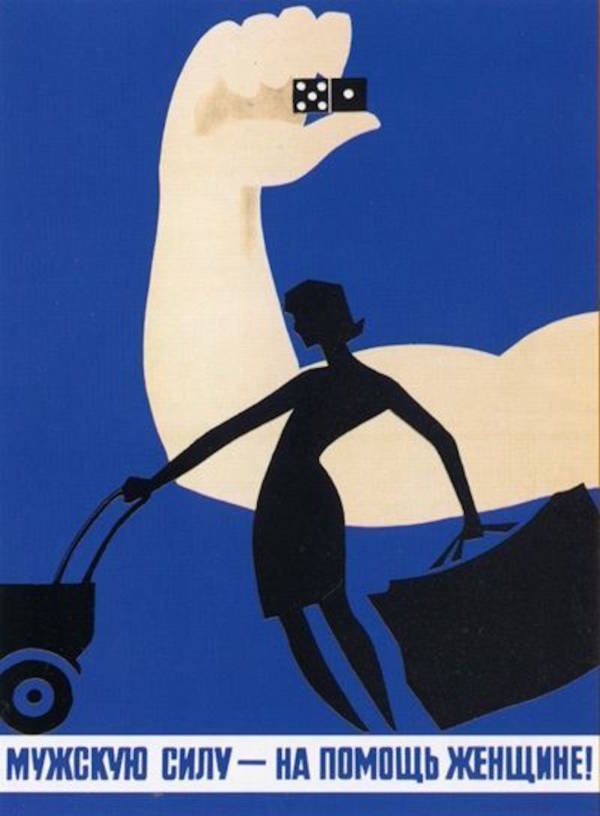 The socialist society was meant to promote economic equality as well as equality within the home. This poster calls out men who play dominos while their wives do all of the housework. 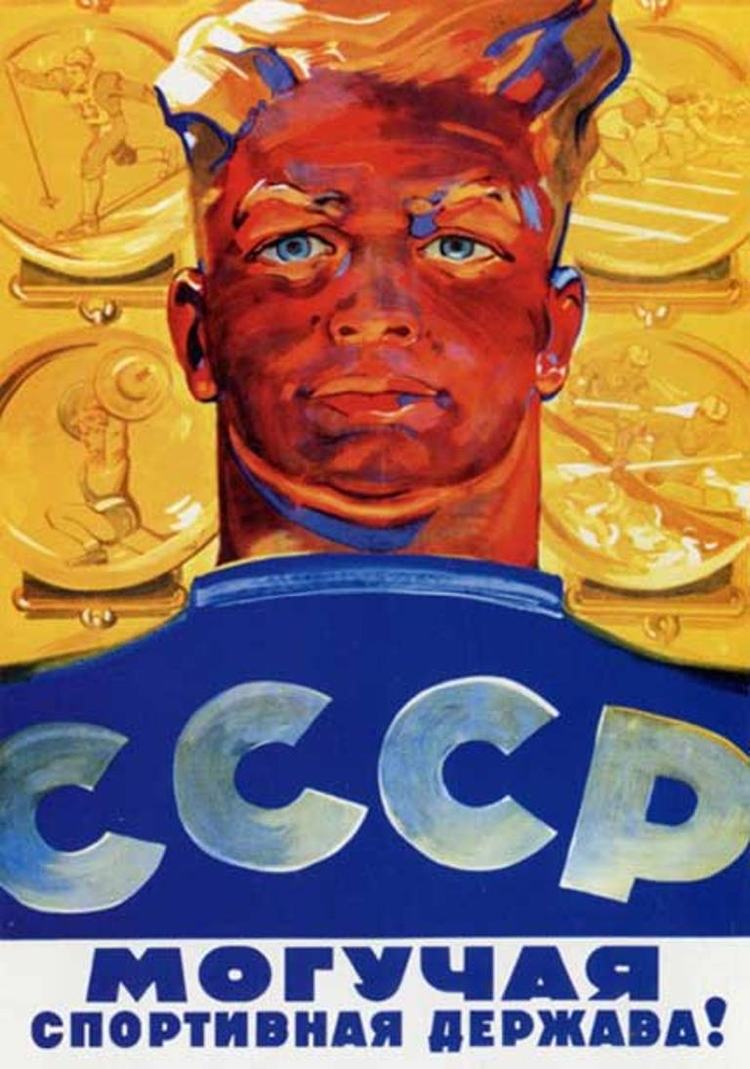 This poster demonstrates the Soviet Union’s athletic dominance over the USA during a time when the Olympic games were marked by great tension between the United States and the Soviet Union. 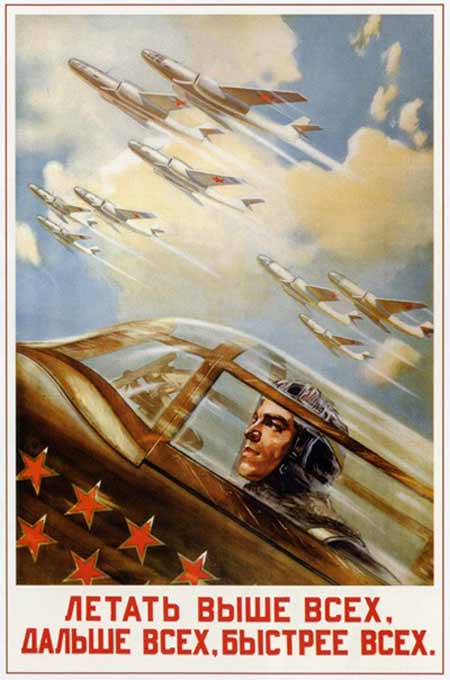 The Soviets weren't going to stop building weapons just because the war was over. This poster, published one year after Stalin's death, aimed to assure the Union's citizens and enemies that it was still a force to contend with. 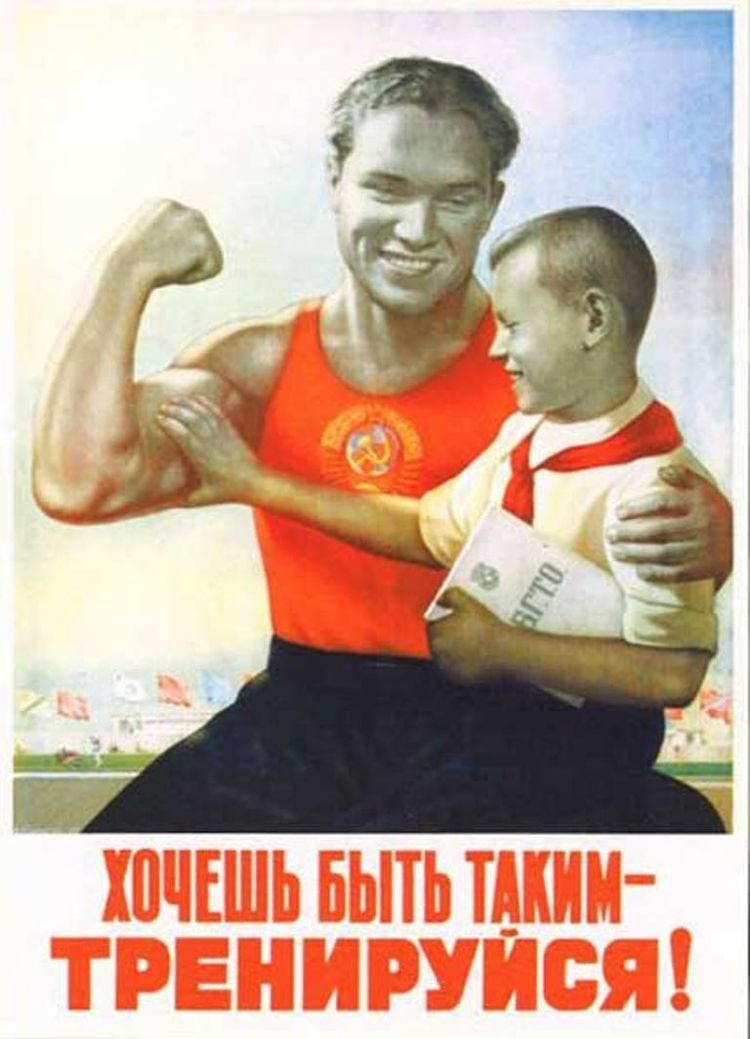 In order for Soviet Union citizens to work for the benefit of the country, a training program was introduced in 1931 to create Spartan-esque athletes. This program included running, high/long jumping, swimming, and gymnastics. 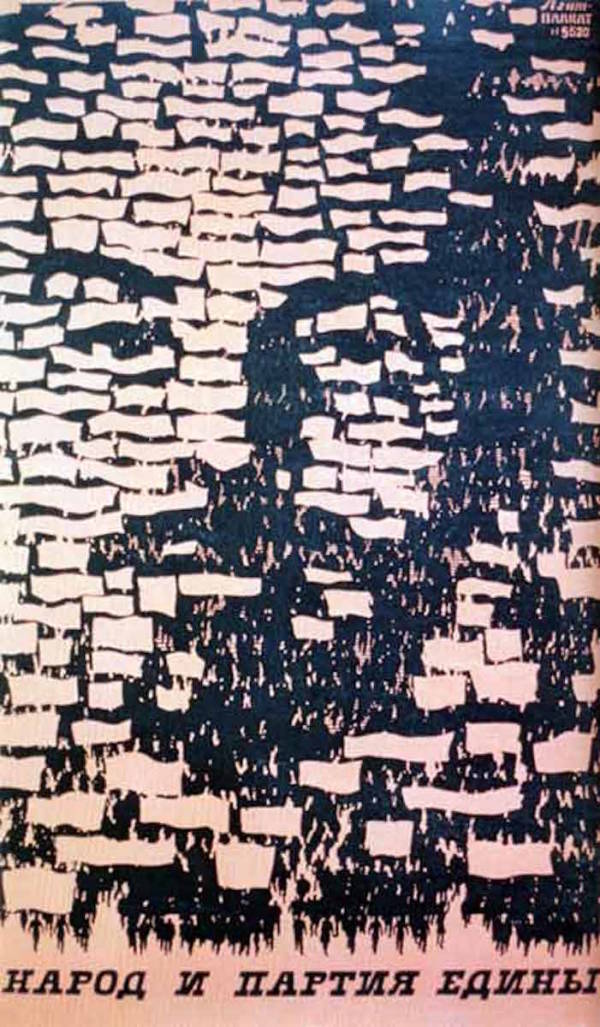 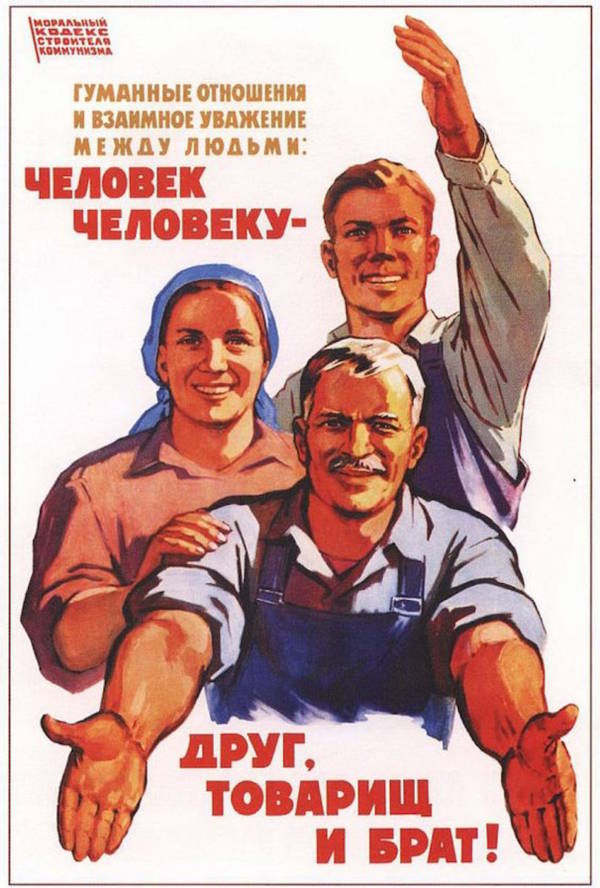 This poster was made just after the Moral Code of the Builder of Communism was adopted by the Party. Along with guidelines dictating how the economy should be structured, the plan also gave helpful guidelines on how to be a person, including rejecting laziness, lies, and money-grubbing. 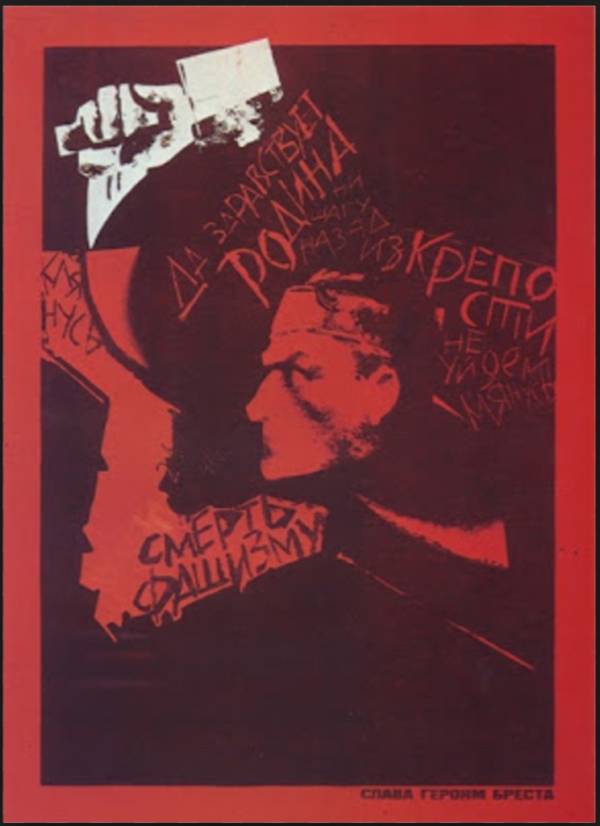 This poster features popular war slogans "I swear," "Viva Motherland," "No step backward," "Never retreat from the fortress," and "Death to fascism." It commemorates the defense of Brest by Soviet soldiers during World War II in 1941. 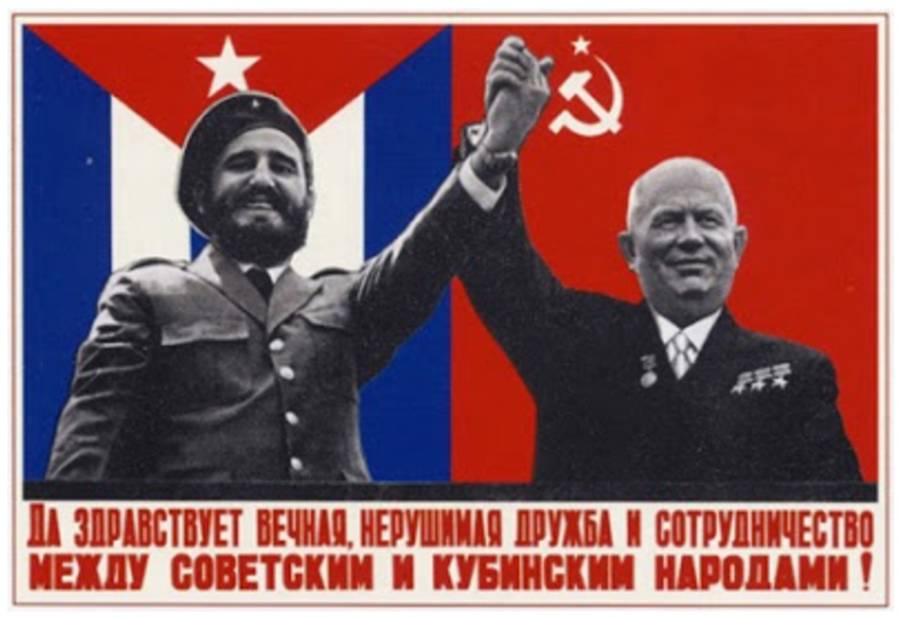 The Soviet Union established close ties with Cuba in the 1960s in order to gain a strategic advantage against the United States. This poster is from Fidel Castro's visit to the country, when he was awarded the honor of "Hero of the Soviet Union." 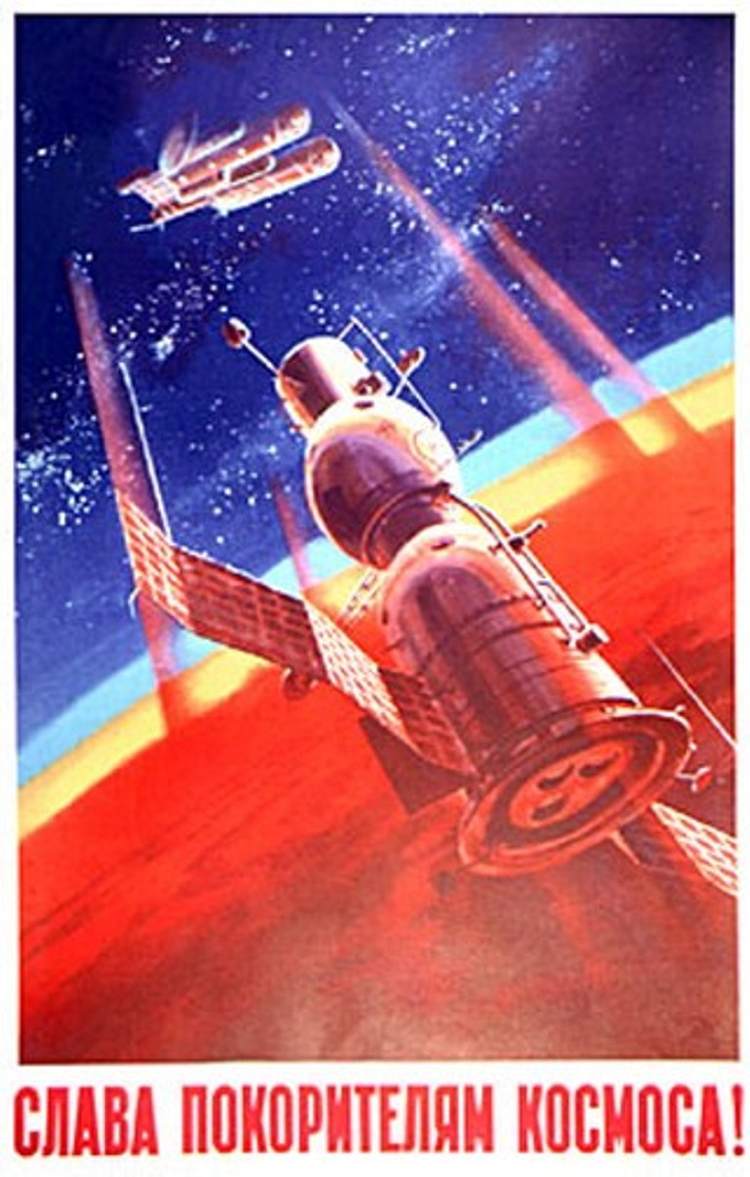 This poster expresses the obsession with space travel and highlights how the Soviet system of socialism and the nation’s technological superiority would pave the way for public space exploration. 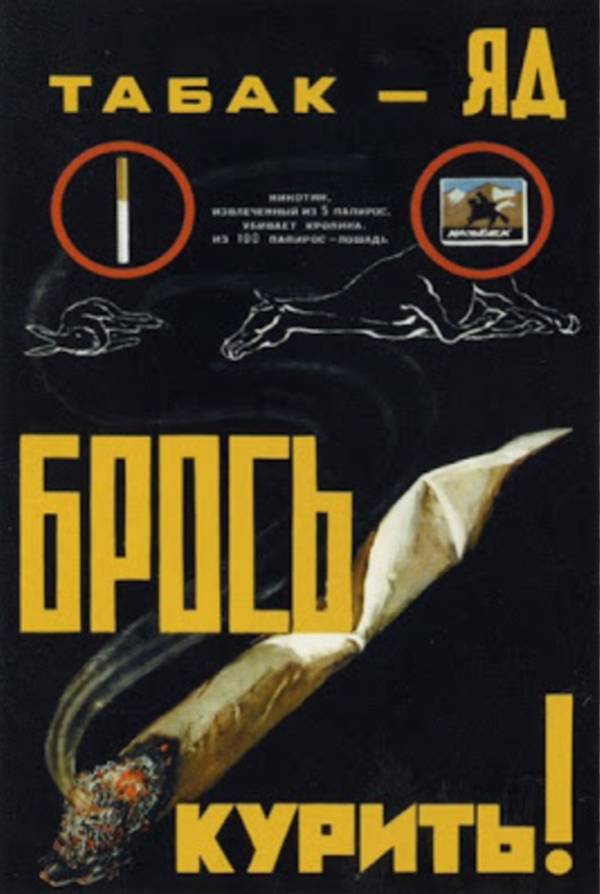 This anti-smoking poster claimed that it only takes four cigarettes to kill a rabbit and 100 to kill a horse.

Even in the 1950s, the campaign took on a meme-ish quality. People all over the country made spoofs of the ad with slogans like "a drop of nicotine blows a hamster up to infinity." 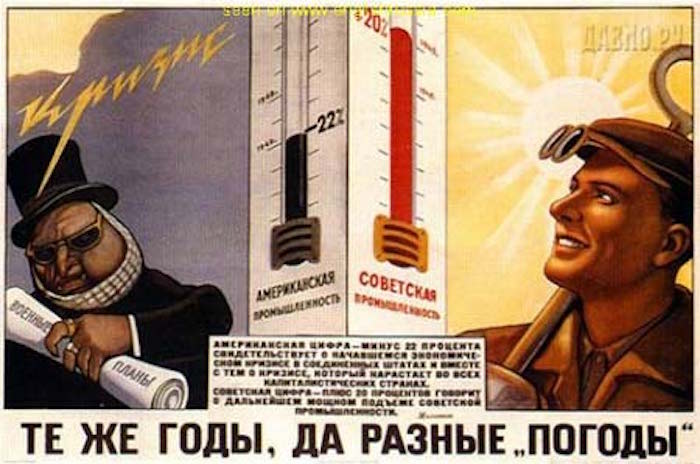 While the U.S. looks cloudy and bleak, the sun is shining in the USSR.

The black thermometer is labeled "American Industry Rate," which is apparently struggling compared to the Soviet's. The box at the bottom describes the purported economic crisis in America. 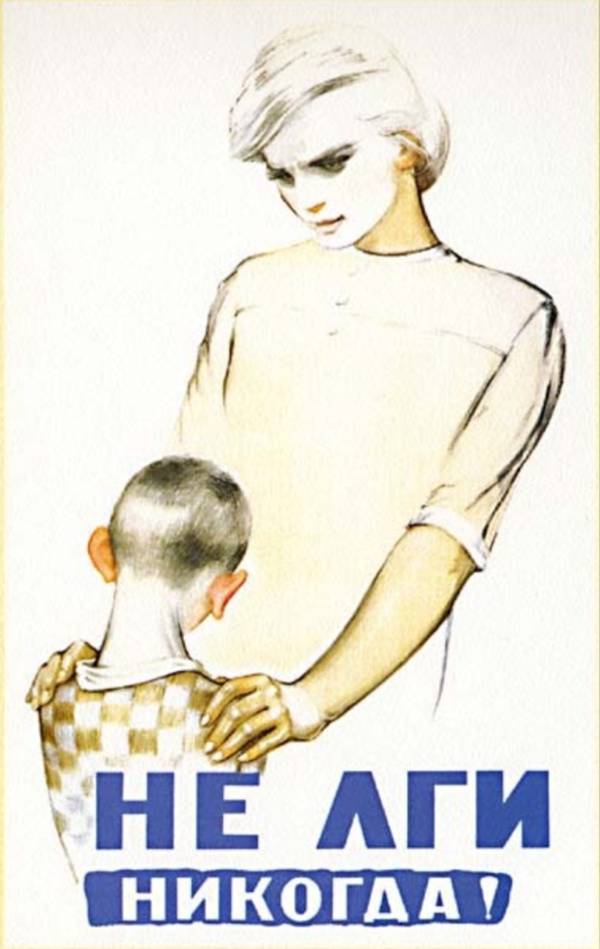 Children were taught from a young age that honesty was one of the most important traits that a good citizen could have. 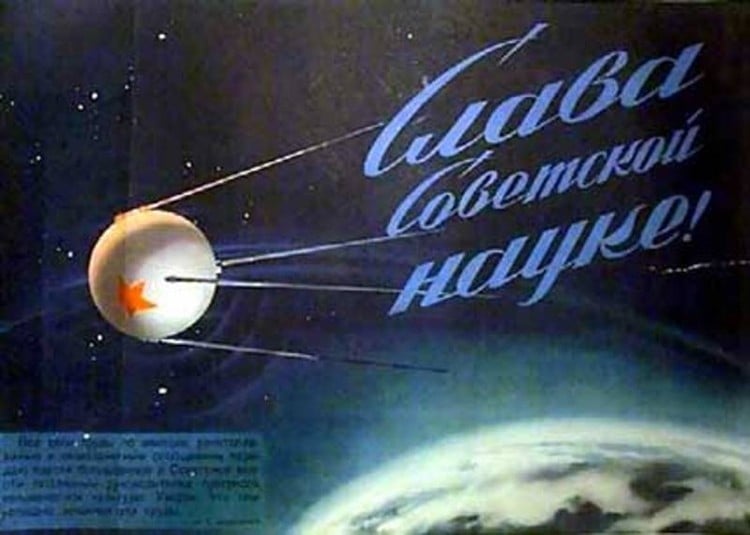 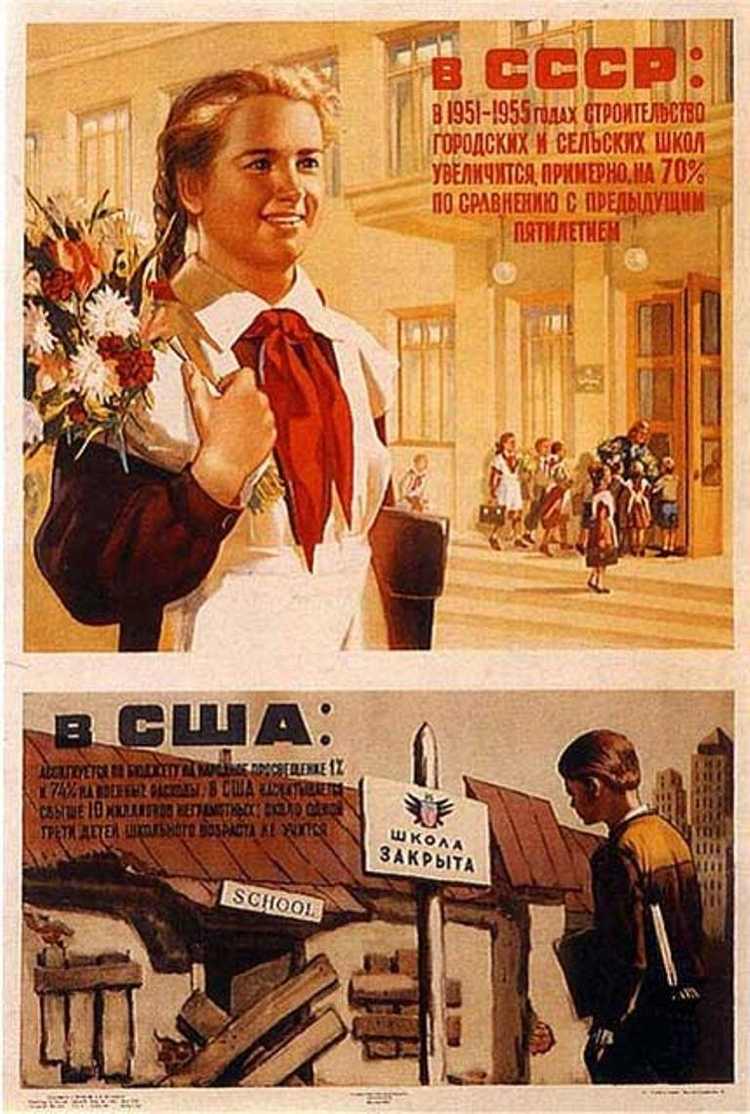 This poster presents a view of the differences between education in the USSR and education (or lack thereof) in America.

“While I was flying round the Earth on the Sputnik spaceship, I saw how beautiful our planet is”, A. Lozenko, 1987 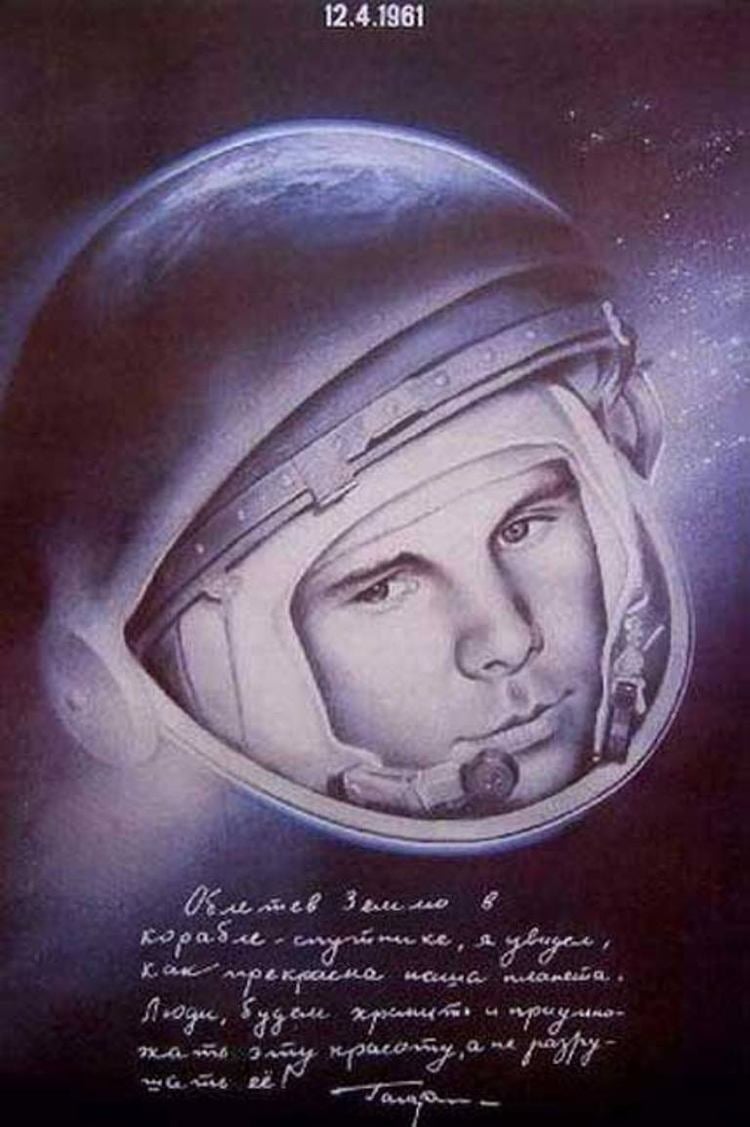 The poster, as the name suggests, is in celebration of Soviet space exploration. 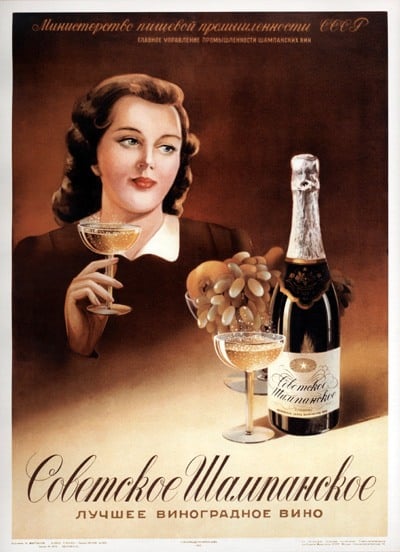 Everyone knows that the best governments have their own official brand of champagne. Recognizing the importance of getting its citizens affordable alcohol, the state sponsored an initiative to quicken the process of creating sparkling wine, making it less expensive. 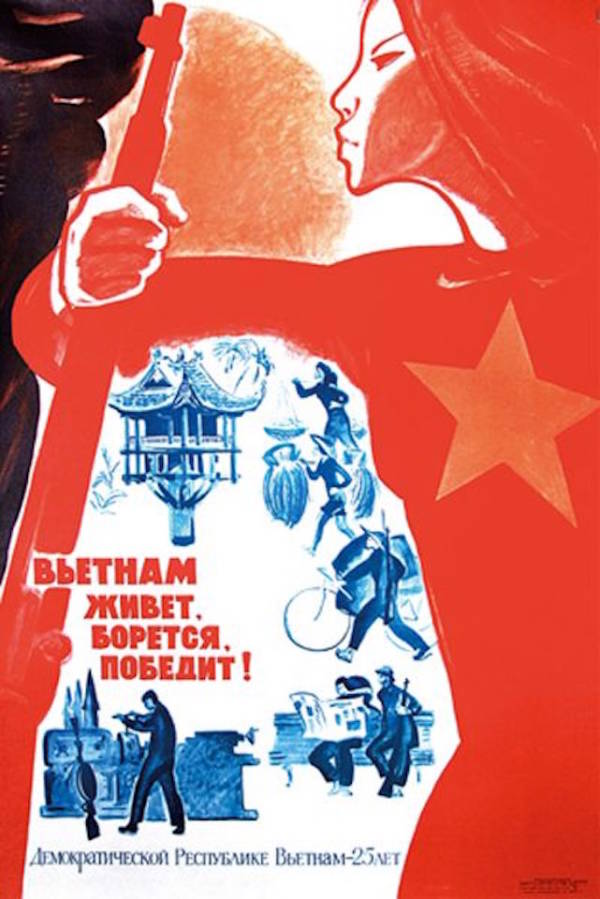 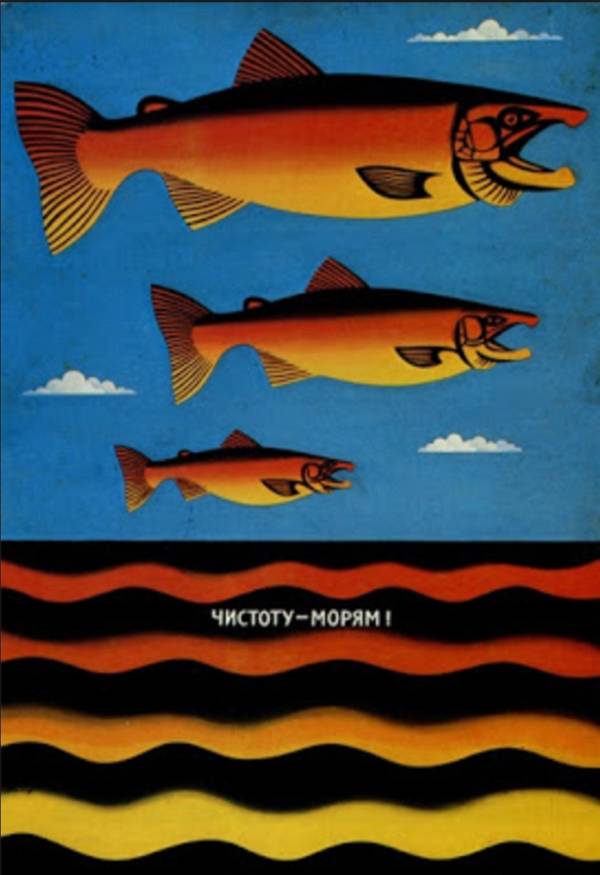 This poster was created after the 1973 United Nations Conference resulted in new international polluting laws aimed at reducing pollution in the oceans. 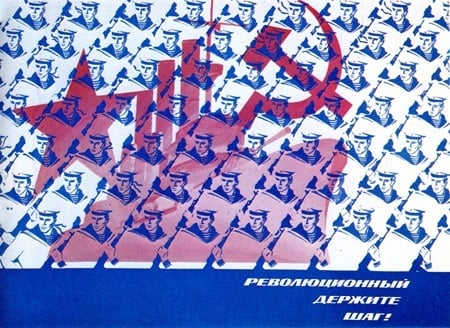 This poster quotes a 1918 poem "The Twelve" about the October Revolution:

The restless enemy in on alert!

Let’s send a bullet in the Saint Russia! 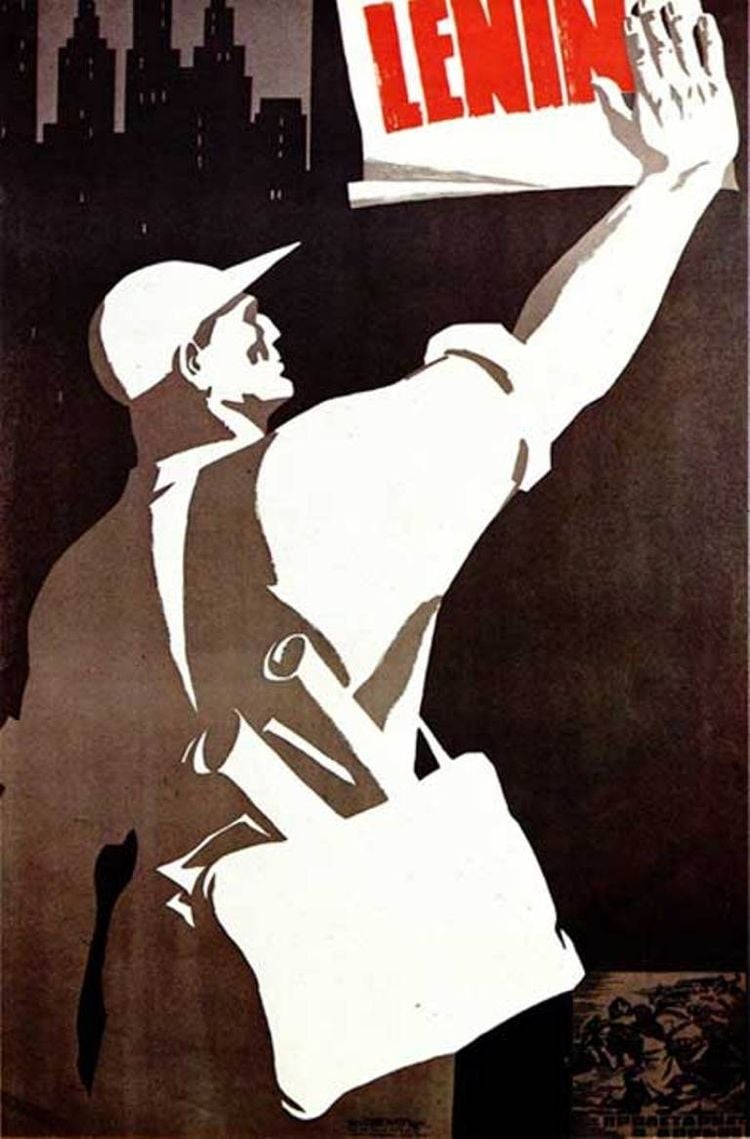 Against a backdrop of the Vietnam War and tensions with America, the Soviet Union was keen to promote a positive image of itself throughout the early 1970s. This poster is aimed toward foreigners with hopes of highlighting Lenin’s ideological superiority. 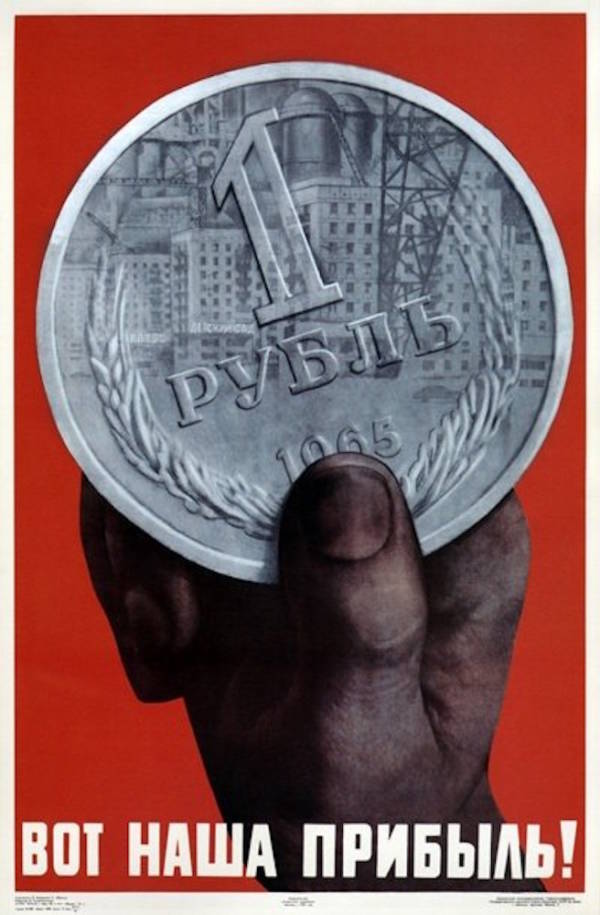 This poster was made at a time when the Party was suggesting new economic policies in which individuals would have more control over their own profits and production costs, hoping that the prospect of earning money could better motivate citizens. 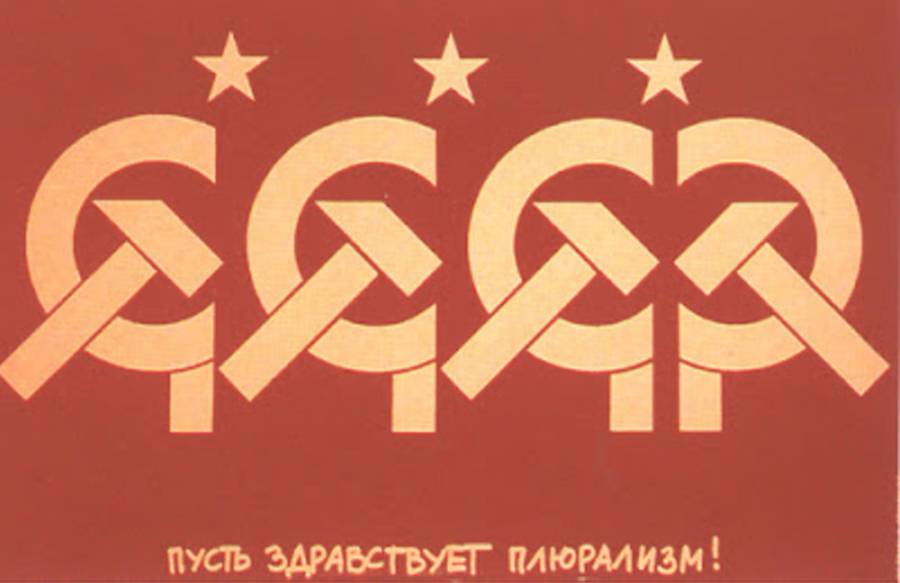 In the 1980s, a young Mikhail Gorbachev was promoting an idea that citizens should be able to express their own opinions, even if it contradicted with the official Soviet stance. This poster reflects that concept by tweaking the classic "Hammer and Sickle" icon.

Though the artistic style of those campaigns persisted into the immediate post-war period, this era's propaganda shifted to focus on all aspects of life -- be they social, athletic, technological, or economic.

The approach shifted again during the height of the Cold War, when ads were mostly meant to assure citizens of the Soviet Union's superiority over the United States.

Throughout the decades, regardless of the exact content, all Soviet propaganda posters had to be colorful, uplifting, well-designed, and eye-catching in order for the messages to really stick. And they were.

So enjoy this compilation of the twenty-five most striking vintage Soviet propaganda posters. If it didn't go against the very socialist principles that these posters were promoting, we'd say that the Soviet Union's marketing team deserved a raise.